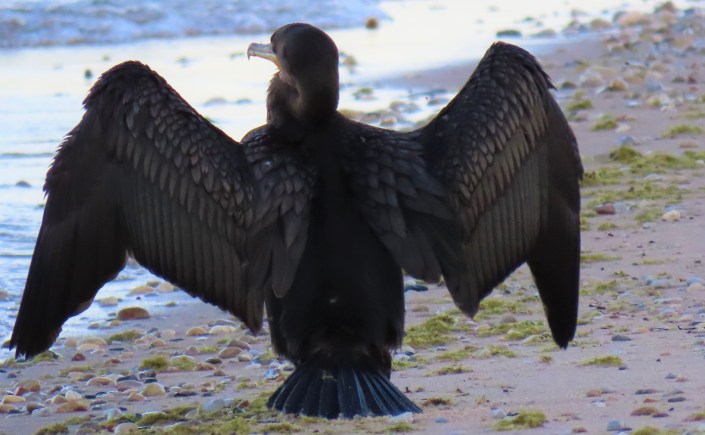 Double-crested Cormorants are one of the most fascinating and peculiar-looking birds of Oakland County. Their sightings occur most often in May during northward migrations and again in early September as they head south from their colonies located along the shores of our Great Lakes. Many that are now passing through are likely to have departed colonies located on or near Lake Michigan’s Beaver Island Archipelago in northwest Lower Michigan.

National Geographic defines an archipelago as “a group of islands closely scattered in a body of water.” Usually, the body of water is the ocean, but can also be a very wide river or a lake, as in the case of Lake Michigan’s Beaver Island Archipelago. It’s named “Beaver Island” Archipelago after the largest of the 14 islands in the group and is situated along the west side of the Manitou Passage. The archipelago was created by the last glacial retreat some 11,000 years ago, the same land-forming event that enriched Oakland County with hundreds of lakes.

Many Michigan boaters and anglers know the Beaver Island Archipelago well. Small flotillas of charter boats often head out from historic Leland Harbor in pursuit of trout and salmon. Leland Harbor, a popular gateway to the archipelago, is also where I first became acquainted with cormorants about a decade ago when I noticed a few gangly-looking, dark-colored birds on the harbor’s breakwall. That was the moment I was smitten by these prehistoric appearing creatures.

Except for a small one I have been told about at Kensington Metropark, there are no other cormorant breeding colonies I am aware of in Oakland County. The closest sizable colony is on the shore of Lake St. Clair in Harrison Township. However, our small Oakland County lakes make for great rest, refueling, and loitering stops, and that is where most sightings occur. I had the pleasure of watching a juvenile cormorant submerging at a small pond at Waterford Oaks County Park. After several underwater pursuits, it came up with a goldfish in its hooked beak.

I’ve seen lone cormorants along the Shiawassee River and at Crooked Lake at Independence Oaks County Park, and I managed to photograph about dozen cormorants perched on a dead tree while kayaking on Lake Sixteen in Orion Township. Perhaps you have seen cormorants too somewhere in our county without knowing what the strange-looking, black birds with a snake-like neck were. I’ve discovered that just saying the word “Double-crested Cormorant” to a non-birder is likely to bring that proverbial “deer in the headlights” look, followed by the words, “A what?” Over the years, I’ve had cormorants misidentified to me as baby herons, dark black egrets, and strange-looking ducks.

Not everyone is a fan of cormorants. Far from it. Cormorants are voracious predators of fish, for that’s what they evolved to do, and that upsets more than a few anglers. As a result, the ongoing cormorant-fishers conflict in Michigan will continue, but the conflict seldom plays out in Oakland County since our habitat is not conducive to cormorant colony formation, and we have no commercial fisheries.

If you search cormorants online, you’ll find a wealth of negativity. They have long been looked at as a symbol of bad luck and evil, have been persecuted by commercial and sport fishermen, and “controlled” by government agencies across the nation when they are deemed to be killing too many fish. There is a widely held belief that cormorants seriously damage the sport and commercial fishery – a generally wrong one, according to Northern Illinois University researchers.

I like cormorants. I take pleasure in simply watching them, whether it’s occasionally seeing a few perched on a tree in Oakland County or hundreds at once in flight when I’m stationed at the South Manitou Island lighthouse as a volunteer lighthouse keeper with our National Park Service, the location where I captured many of the photos in this blog.

I never intended to become a cormorant watcher, but the catwalk of the island’s lighthouse, with its unobstructed view of the Manitou Passage, lured me into becoming one. The lighthouse is located less than a mile from a cormorant colony on the island, and sightings were constant. Cormorants also rested and nested on the nearby wreck of the Francisco Morazan, a freighter that ran aground on the east side of the island in 1960 during a snowstorm.

While on the island, I also noticed that when nesting, cormorants create rather strange grunting croaks, perhaps best described as the noise of pigs in a pen.

Now that their breeding season is just a distant memory, the two main activities of cormorants in the waning days of summer are fishing and resting, a fact I shared with friends that work along the Manitou Passage in northwest Lower Michigan. We joked a bit about that since late summer cormorant behavior reminds me of the behavior of those friends, for they too devoted most of their summer to fishing and resting. I also suspect when cormorants are resting they are thinking about fishing, another behavioral trait shared by fishers who live to be on the waters of our Great Lakes.

As I was doing some fact-checking, I came across this information on cormorants from the U.S. Fish and Wildlife Service: “This black or grayish-black bird is about three feet long with a wingspan of 4.5 feet and has a hooked bill and powerful webbed feet that are used for swimming underwater. An adult weighs about five pounds. This species gets its name from the tufted feathers on both sides of the head, referred to as “crests,” that are present only during nesting season. Adults eat an average of one pound per day. Double-crested cormorants feed during the day by diving for fish.” One need not be a whiz at math to recognize that eating a pound of fish per day is a lot of fish when you only weigh five pounds. That would be akin to a 200-pound man eating 40 pounds of food per day. I don’t even want to think of the cormorant output, but when one gets downwind of a cormorant colony the smell is noticeable, a fact I quickly discovered six years ago, during my first lighthouse tour of duty on South Manitou Island.

On many occasions, I had a bird’s eye view of cormorants diving for fish near the lighthouse breakwall. Cormorants use their powerful webbed feet for underwater propulsion and the hooked tip of the upper bill is used to grab onto their slippery prey. After some of their fishing ventures, they would fly to shore and then spread their wings in classic cormorant fashion. The Cornell Lab of Ornithology explains their wing-spreading behavior this way: “Cormorants have less preen oil than other birds, so their feathers can get soaked rather than shedding water like a duck’s. Though this sounds like a liability, this is thought to be an adaptation that helps cormorants hunt underwater more effectively.”

Weather watching was a constant fact of my life at the lighthouse, and cormorants quickly became one of my favorite weather-forecasting signs of nature. I noticed that when they flew low to the water, towards their colony in the middle of the day, storms often followed less than an hour later, unlike on calm days when they would usually be flying at the height of the catwalk or higher. In the evening, I would watch them in silhouette, passing by the lighthouse’s bright light as they winged their way back to their colony for the night.

September is a great month to explore our parks and trails, paddle our rivers, and watch for bird migrations. You may even spot a migrating cormorant flock flying overhead in a rather ragged-appearing, V-shaped formation. Unlike Canada Geese, cormorants do not honk in flight, and they beat their wings much faster. For that is the way of the cormorant as they head south for the winter.