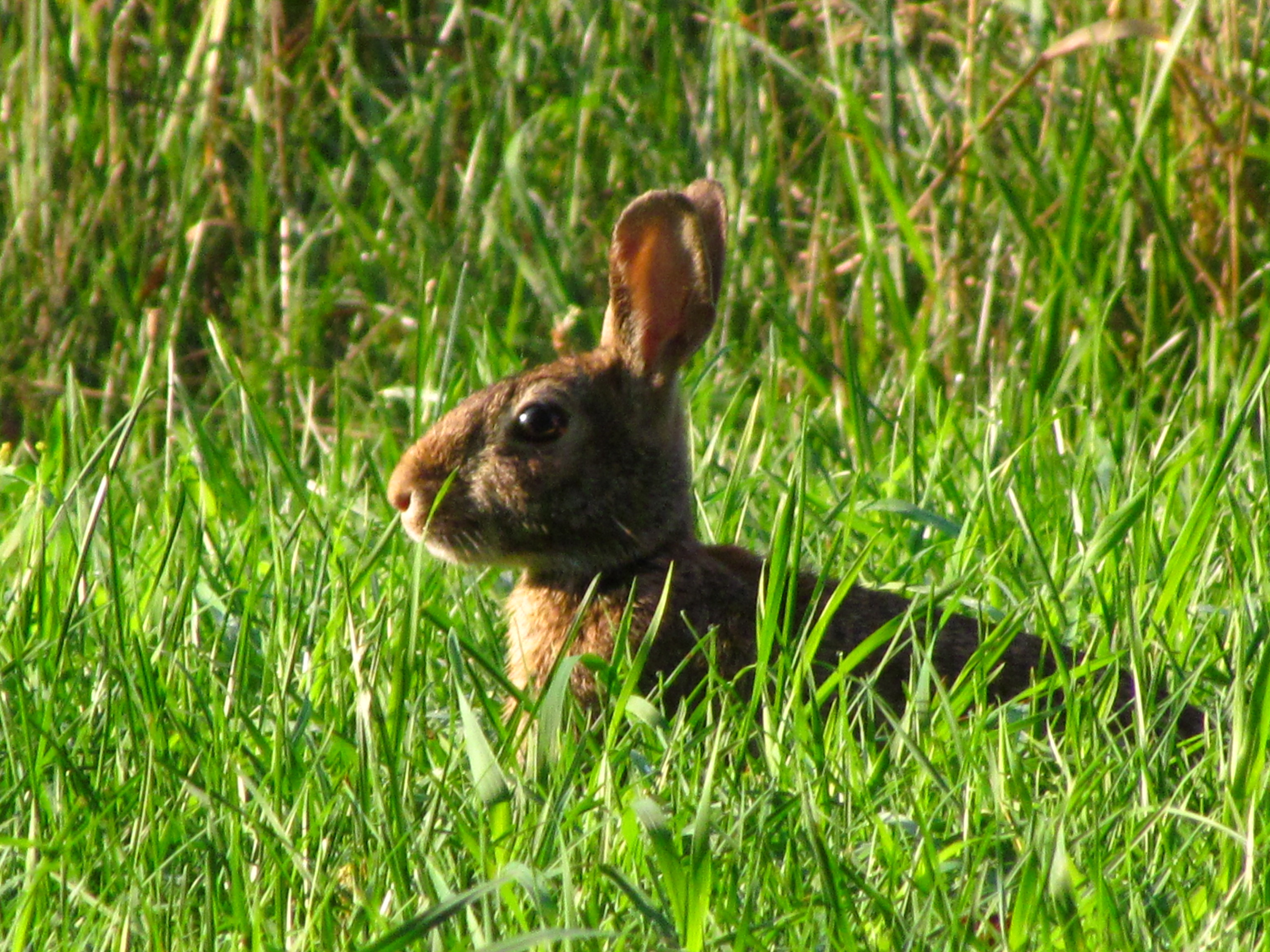 Eastern Cottontail Rabbits appear in snow free lawns almost simultaneously with the first crocuses of spring, but they are not found “hopping down the bunny trail,” except perhaps in colorful children’s books with Easter themes. As for egg laying, that’s out of the ability of real rabbits, even though April 1st sometimes brings rabbit related practical jokes and staged photos of rabbits incubating eggs. There is no joking however about the name “cottontail,” for the tail of the rabbit looks like a ball of fluffy white cotton and that’s where this wilder side tale begins, a tale on the lighter side, of the wilder side.

No matter how long one searches scientific literature for information on a cotton-tailed creature known as the Easter Bunny, it will not be found. Yet with the dawn of spring already behind us, and Easter Sunday just around the corner, this is the perfect week to share secrets of rabbits that hop about the woodlands, wildlands and lawns of Oakland County – and then perhaps it’s time to head to the grocery store for chocolate eggs and other seasonal treats, including my favorite, yellow marshmallow peeps. Consider that activity a salute of sugary, gastronomical recognition to the Eastern Cottontail.

The Eastern Cottontail Rabbit (Sylvilagus floridanus) is one of the most common mammals of Oakland County and its life story is one of abundance and noticeability. They thrive almost everywhere, with a strong preference for habitats tucked away between woody areas and open areas. These “edge zones,” areas where fields meet woods or shrubs grow near lawns, are abundant throughout Oakland County. That fact makes both suburbia and the city prime rabbit habitat, for rabbits know no borders and thrive in our midst all across the county. 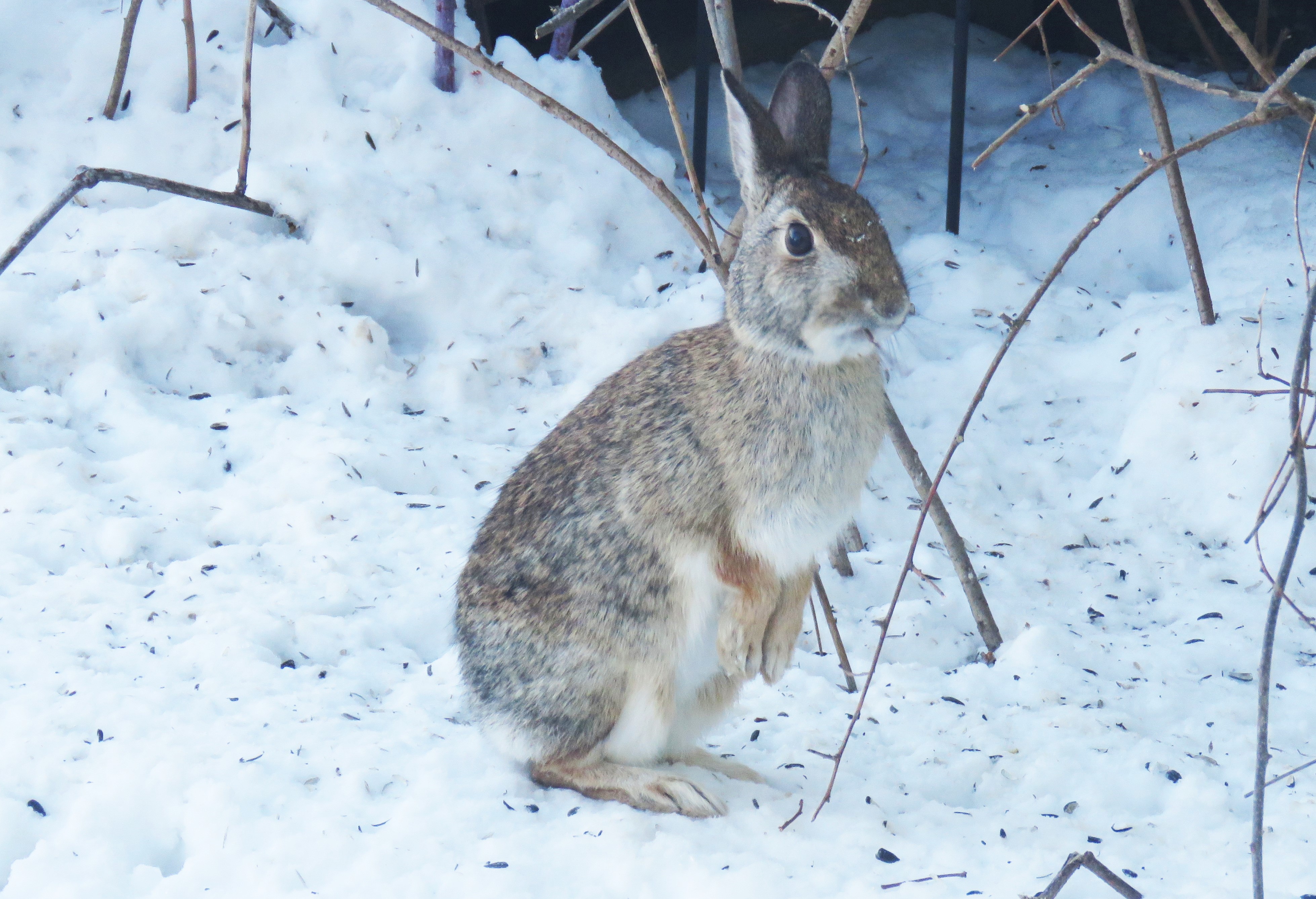 Every time I hiked this past winter, I found rabbit tracks and rabbit scat, and often noted bark on saplings that had been gnawed on by rabbits. I seldom saw rabbits when I stayed on a snowy trail. However, when I trekked off trail, my unintended close approaches brought one of two responses from hidden rabbits. Some, in a sudden burst of speed, raced away in a zigzagging manner, a technique used to try to escape a pursuing land predator. Others remained motionless in a thicket hoping to avoid detection when a two-legged threat, me, approached. 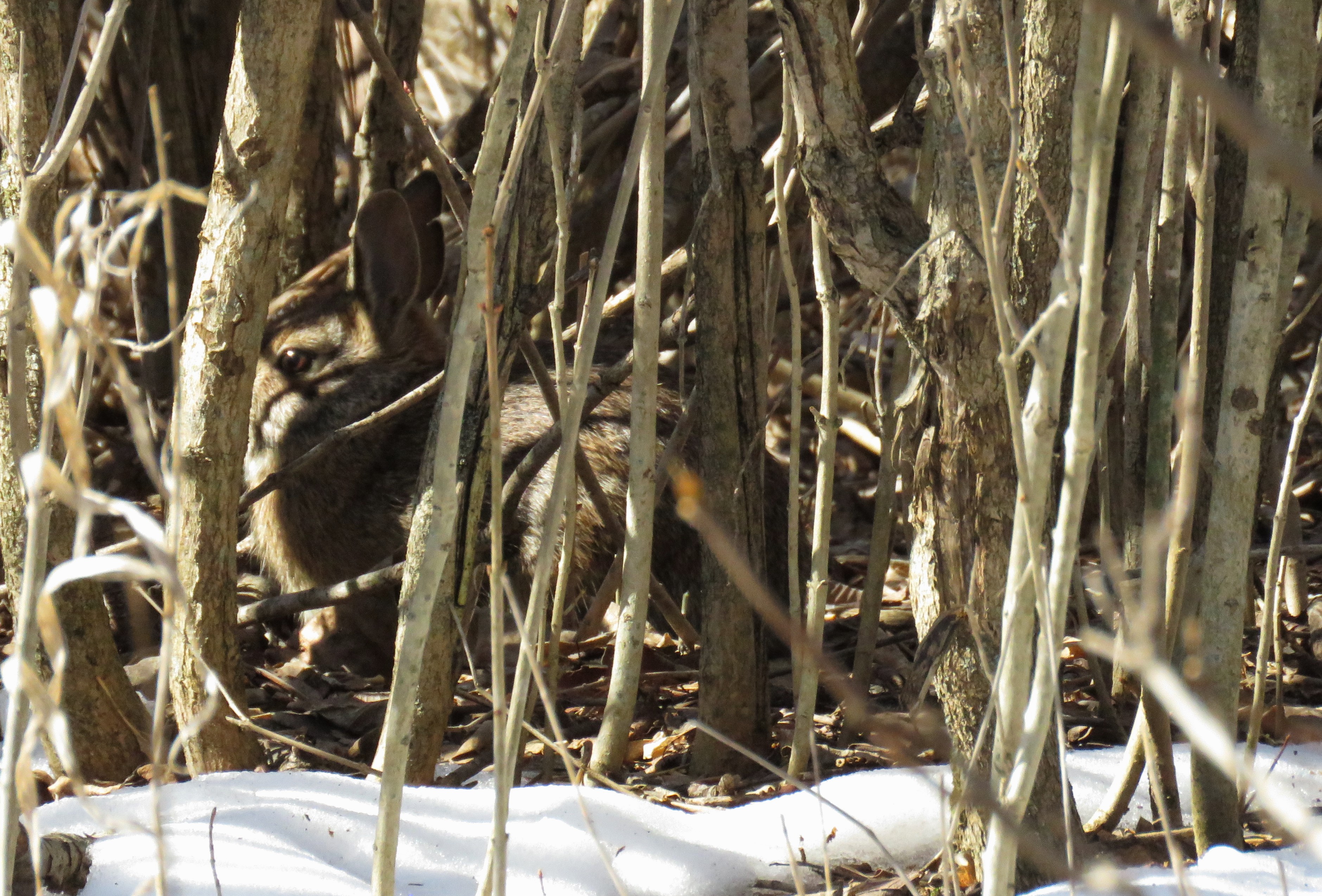 Winter was a tough time for some rabbits, for their favorite greens were absent. During times of heavy snowfall or extreme cold, they took shelter in abandoned or occupied dens of groundhogs and even skunks. The Eastern cottontail is crepuscular in behavior, meaning it is most active during twilight, between dawn and dusk, with their major foraging taking place at night. In the day, they tend to hide from predators. As the days now lengthen, and we become more active, we are more apt to encounter rabbits grazing at the edges of our trails. The rabbit that hung out under my porch for most of the winter, coming out to scrounge under the bird feeder at night, now spends hours in the sunlight chewing on residual bird seed and gnawing on shrubs and my raspberry vines.

Spring has arrived and that means rabbits are now full speed ahead when it comes to breeding. Eastern Cottontails do, in fact, breed like rabbits. They breed three or four times a year producing two to eight young each time with four or five seeming to be the norm. Their nests are shallow depressions in the ground lined with grasses and fur from the mother rabbit. These shallow nests are often very close to gardens, or located in a lawn or even at the edge of a golf course. The new-born rabbits grow rapidly with the female nursing them twice a day. They mature quickly and are self-sufficient in five weeks and then leave their cozy fur-lined nests. After three months, they are sexually mature and able to add more rabbits to the population.

With reproductive facts like that, one would think we would be swimming in a flood of rabbits, but rabbits have a long list of local lurking predators including Barred Owls, Great Horned Owls, Red-tailed Hawks, coyotes, red fox, gray fox, weasels, mink, feral and domestic cats, and dogs. Baby rabbits in their nests are also preyed on by raccoons. Thousands more die each year under the wheels of autos. Rabbits have no real defensive skills, which leaves them especially vulnerable to attack if they can’t stay hidden or rapidly flee from predators. Mother rabbits protect their young from predators by staying away from the babies except for nursing so that their presence does not draw attention to the nest. When a nest is disturbed or discovered, the young will sometimes be relocated, an event I captured on a motion-activated wildlife camera trap several years ago in my garden. The first of the three short clips show the young rabbits in the nest, in the second clip they are out of the nest. The third clip, on the following night, captured the approach of raccoons: hungry predators that arrived one night too late for a rabbit dinner.

Cottontail rabbits eat a great variety of plant materials and it won’t be long until the great feast of plantain, dandelions, clovers and wild strawberries lure rabbits into open areas, a moment in time that makes life easier for hawks and owls, masters of effective aerial attack. Rabbits that survive the early, danger filled days of spring and live in close proximity to humans turn their attention to gardens and feast on fresh vegetables as soon as the plants emerge, a fact of rabbit life that does not endear them to many homeowners. 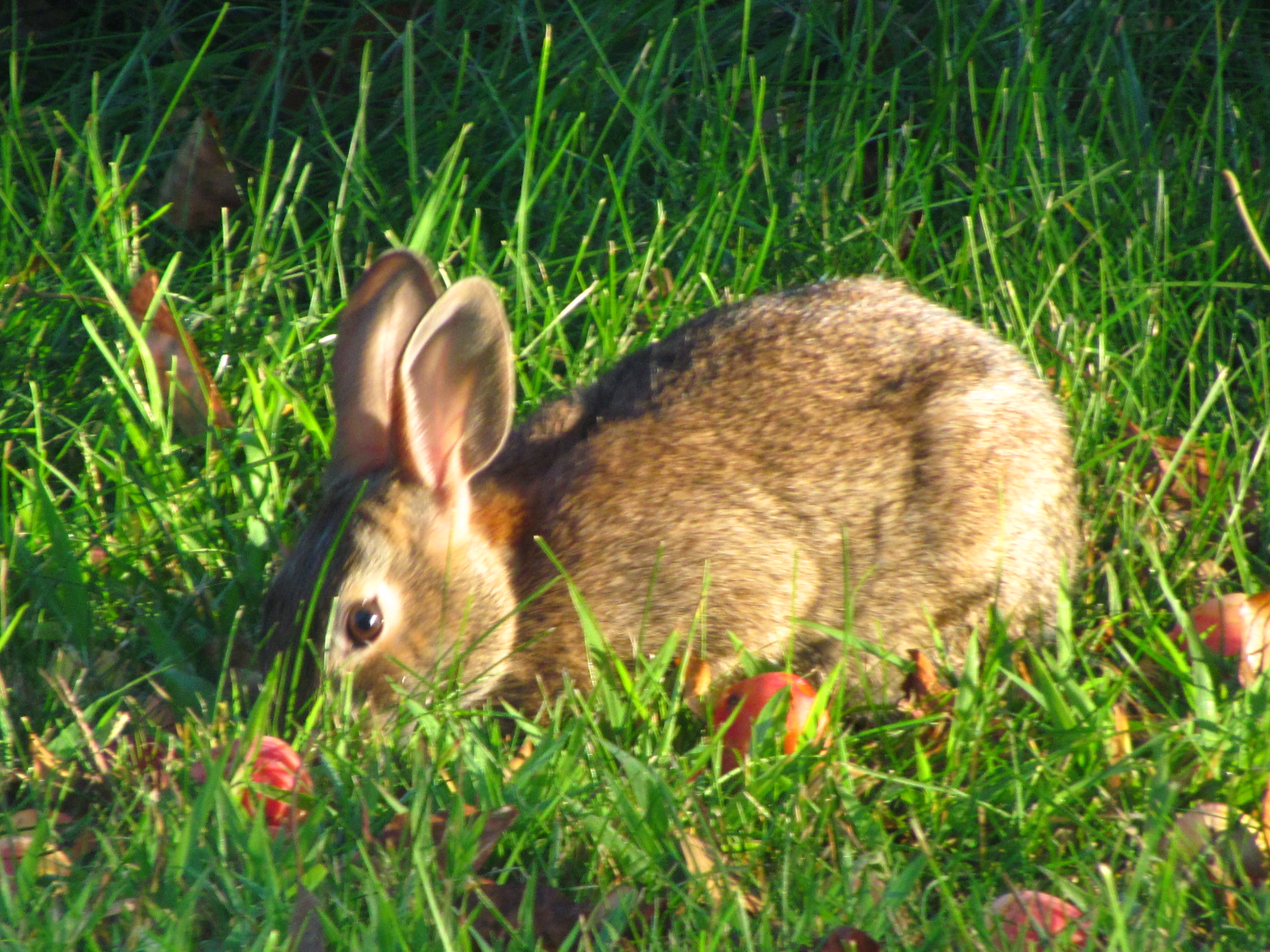 April is the perfect month to explore the hundreds of miles of trails that meander through our parks and connect our towns and cities. All of them are rabbit habitat. If your little one wants to search for Peter Cottontail on Easter weekend, an Oakland County trail just might be the perfect place for that nature adventure. For one never knows what they may find hopping down the bunny trail on the wilder side of Oakland County. 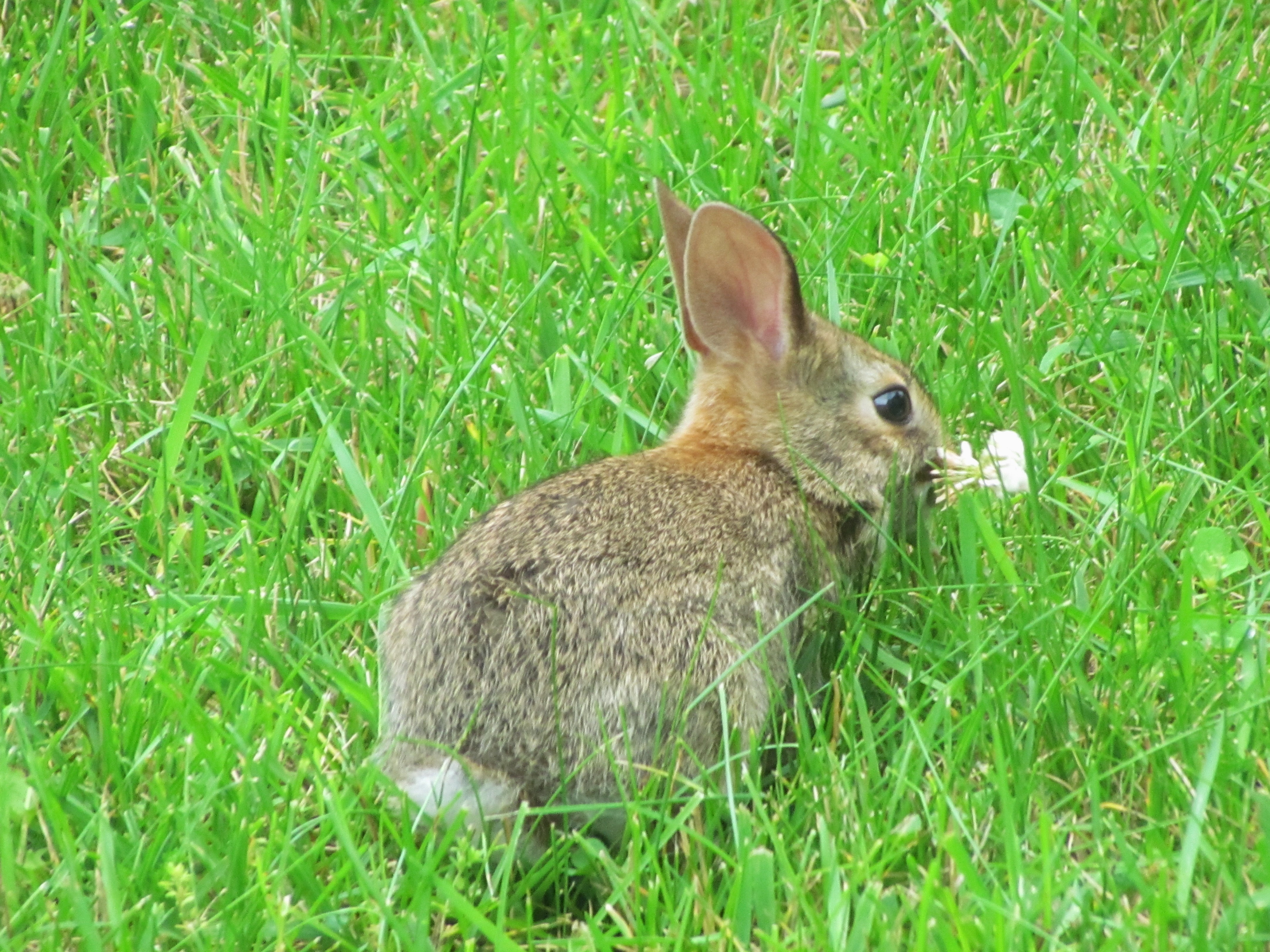