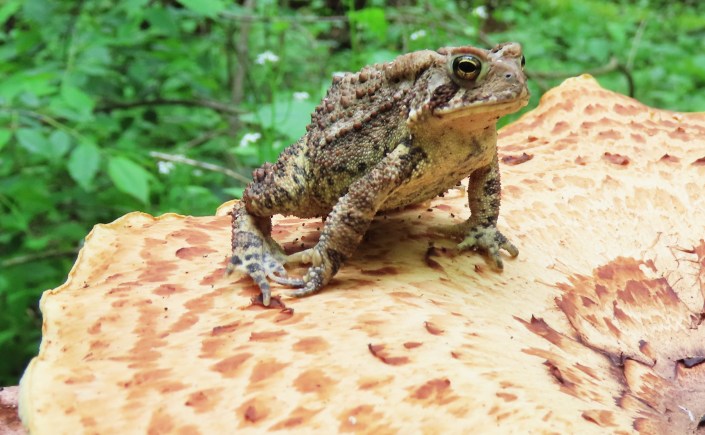 An American Toad is an eye-catching creature, especially when it’s perched on top of an equally eye-catching Dryad’s Saddle fungus. Toad tales may not sound exciting, but now that this handsome toad perched on a “toadstool” has captured your attention, read on for the rest of the toad trills and tales.

Toads start trilling as if their lives depend on it as soon as shallow wetlands warm. As a matter of fact, their lives do depend on it. But what is all that nearly hypnotic trilling serenading about? It’s just toads looking for love. Female toads are attracted to the trilling, but for human observers, it’s a glimpse into nature’s way, thanks to their noticeable vocal pouches that inflate to act as resonance chambers. Listen and watch here:

The trills are extremely audible and can be heard from a distance. Some trills last over 20 seconds; then a brief pause and it repeats. I’d like to think the pause is when the toad wonders if another toad is listening.

The Eastern American Toad (Anaxyrus americanus, formerly known as Bufo americanus) is one of the most common amphibians of Oakland County. Before proceeding further, a few facts need to be established. First, all toads are frogs, but not all frogs are toads. Confused? You aren’t alone. While frogs and toads are both amphibians, they are separate families of animals. And while they are similar in many ways, they do have differences, but those difference are not always clear cut.

Both frogs and toads are amphibians that belong to the scientific order Anura within the animal kingdom. Basically, a toad is a classification of frog. However, there is little scientific distinction between a toad and a frog. Live Science explains some of their differences with humor and facts.

Salamanders and newts are also amphibians, and they all need a moist environment for survival. Amphibians such as toads are born with gills for breathing under water before a transformation occurs, allowing the toad tadpole to transform into a tiny toadlets. Reptiles such as snakes and turtles are born with lungs and start their lives on dry ground. Just as I started to record the vocalization of my favorite amphibian of warm weather—the toad—a Blanding’s turtle came into view and headed back into the water, perhaps from an egg-laying mission.

In mid to late May, toadlets emerge from shallow weedy waters by the hundreds and hop about, hunting for their first meal away from their watery world of birth. The word “amphibian” comes from a Greek word meaning “double life,” a reference to being born in water and then living their life on dry ground.

So, how do we tell the difference between a toad and a frog? The biggest clue is the texture and appearance of their skin. Toads are warty-looking, covered in little lumps and bumps, while frogs are sleek and smooth, and appear shiny. Toads virtually always have dry skin, whereas frogs look wet even when they are out of the water. Contrary to various versions of a persistent myth, handling a toad will not give a human warts.

Location can also help with rapid identification. If you’ve spotted an amphibian making its way across a sidewalk or hopping about your garden, the chances are excellent it’s a toad. With the exception of leopard frogs that spend much of their time in moist meadows, and wood frogs that spend much of their life in woodlands, the rest of our frog species are rarely found away from water. Toads, however, are far less reliant on water, except when its breeding time, when a pond, ditch, or puddle is critical. Toads can also cope much better with dry conditions than frogs.

Toads become most active on warm, humid nights like we had late in May. Because of their gluttonous habits, some gardeners provide toad houses to welcome toads to their yards. They will feast on slugs and also readily eat grasshoppers, spiders, earthworms, crickets, and other types of invertebrates. If it’s small and moving and can fit in the toad’s mouth, it’s a meal. This hefty one clearly shows the large mouth and its attractive warts.

Toads are far more adaptable than most other members of the frog species, most likely because of their ability to live in drier conditions, which makes their presence in yards and gardens not at all unusual. They are found in habitats ranging from expansive woodlands to open fields, grassy areas near ditches, and homeowners’ gardens. At times they even appear in areas well away from water, confirming toads go on long-distance hopping journeys. When a toad finds a Dryad’s Saddle fungus, it’s the perfect sheltered place to wait in ambush underneath, or perhaps just take in the sights from the top.

Very few animals prey on toads with any frequency. Toads have glands that produce a toxic secretion, known as a bufotoxin, that helps the toad defend itself from predators. However, predators of toads in Oakland County include raccoons, hawks, and northern water snakes.

Although the eastern hognose snake is a voracious consumer of toads, they are an uncommon snake species of Southeast Michigan. However, on South Manitou Island, which is part of Sleeping Bear Dunes National Lakeshore, hognose snakes are common, and toads are their major prey. When feeling threatened, a toad can fill its lungs with air and puff up, presenting itself as something too large to swallow. That act does not deter a hognose snake. The formidable-looking eastern hognose snake has two enlarged teeth that are used to deflate toads and make them easier to swallow.

Toads have other ways to avoid being eaten too, including their ability to blend in with their surroundings, or even burrow into the sand as this one did near the shoreline of South Manitou Island. A partially burrowed toad is also perfectly located to function as an ambush hunter.

These sometimes maligned, warty members of the frog family are a harmless, vocal, and valuable part of nature’s way. Although they are heard more than they are seen, the American toad is very much a part of our diverse landscape. During the heat of the summer, they sometimes stay very close to our weedy wetlands, not to jump in for a cooling dip, but that’s where the bugs are. By the time pumpkins are laced with frost, toads have hopped inland to begin burrowing down into soft soil, and soon after, that they slip  into a state of near suspended animation. Spring thaw signals them to head for the ponds and trill again, telling us that a new season is upon us in on the wilder side of Oakland County.