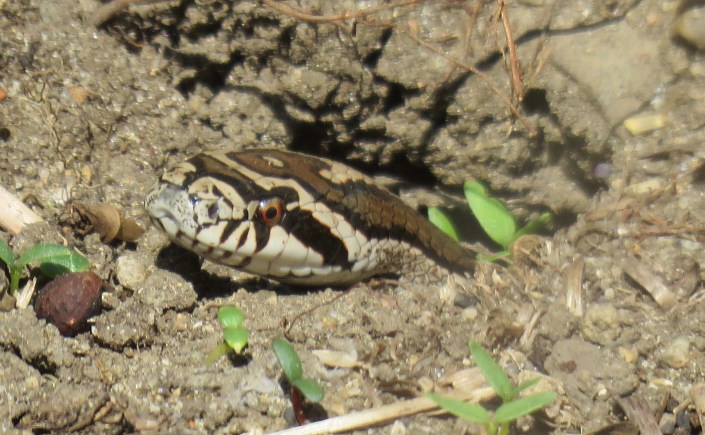 Song birds are singing, daffodils will soon appear, and one of my favorite, often overlooked signs of spring has entered its kitten-fur phase. Kitten-fur? The “furry” feeling catkins of pussy willow are now at their peak and free of snow from Monday’s mini squall in northernmost Oakland County.

Their blossoms produce abundant pollen in the early days of spring, a discovery I learned from watching my foraging honey bees.

The blue sky days of spring are taking hold, and with increased hours of daylight and thawing of vernal ponds and frozen earth, the great awakening of our snakes, frogs, and toads is accelerating. Today I’ll be sharing snippets of information on a dozen of my favorite snakes and frogs that are slithering and hopping about. They have been waiting longer for spring than you and I have been. Let’s welcome them!

I look to the next few weeks for the appearance of the Eastern Milk Snakes that have overwintered in the loose earth of the garden near my front door. Last spring I captured an image of one emerging from a six-month nap. Michigan DNR has a great 60-second clip on these beautiful snakes.

A few days after that encounter, I unexpectedly met another snake species. This time, it was a juvenile Northern Water Snake slithering across a long abandoned trolley line that might someday become part of the Oakland County section of the Iron Belle Trail. I did what any camera-toting nature lover would do. I ever so slowly “flopped down” directly in front of it to capture images as the snake flicked its tongue to gather information on the beast who was acting strange and blocking its path.

I am often asked what happens to our snakes in winter. I can summarize my usual rambling response with one sentence: snakes spend the winter underground in torpor – a period of physiological inactivity in which their metabolic rate drops significantly.

Snakes are ectotherms, animals whose body temperature is regulated by external sources, such as the warm surface of a sunny trail. Snakes need their body temperature to rise in order to hunt for, and then digest, their meals. One of their best warming surfaces in early spring is a sunny, dark colored trail. I had the good fortune about four years ago to photograph an adult Eastern Massasauga Rattlesnake sunning on the hike-bike trail of Indian Springs Metropark.

I took a few photos, gave it the right of way, and meandered on. A second rattler, this one at Independence Oaks County Park, made a message clear for me a few weeks later with its “stay back!” behavior. I did more than that. I backed up further.

As the warm-up continues, snake activity accelerates and it’s the Eastern Garter Snakes that will be seen the most often, especially when they sun on dry leaves.

Another species that is early to emerge is the Eastern Hognose Snake—however it’s a very unlikely find in Oakland County. The hognose is an active hunter of toads. I captured this image several years ago at Sleeping Bear Dunes National Lakeshore, a site with plenty of sandy habitat favored by hognose snakes and their main prey—large toads.

Frogs are starting to sound off with their music and are quite literally hopping into spring. Wood Frogs are one of the earliest songsters of spring. This excellent image below clearly shows the “robber mask” of wood frogs, a great identification feature of the most terrestrial frog of Michigan.

The males are already hopping down to small vernal ponds to start their loud singing that sounds like ducks quaking. Listen here:

The songs define territory and lure female wood frogs to their vernal pond. After mating, the frogs return to the woodlands, which is where they stay until next spring.

Spring Peepers are seldom seen, but their high-pitched peeping sound, which is sometimes described as tiny bells ringing, is unmistakable.

When thousands are singing at once, it has been described as a cacophony of sound. When I listen to their chorus from the edge of my marsh at sunrise, I know that spring is settling in to stay.

Northern Leopard Frogs, sometimes called meadow frogs, are ambush hunters of grassy areas. They eat just about anything they can fit in their mouths—including smaller leopard frogs. Their name, however, is not derived from their hunting habits. It’s a frog with irregularly-shaped dark spots on their legs and back. The males will soon create snore-like rumbling sounds that are attractive to the females. “Come hither, my friend.”

American Toads will also be sounding off from the edge of shallow ponds, marshes, and wetlands as the air and water warms. Their calls are a shrill trill that lasts between ten and twenty seconds. Most are rather dull in color while others, like this rather hefty beauty on South Manitou Island, is very colorful.

When dozens are trilling at once, which is usually the case, it’s a sound that can’t be missed. The throat sac is clearly visible during breeding season when they trill, as this Oakland County toad demonstrated.

Perhaps this Blanding’s Turtle had enough of the shrill trill music of toads and decided to submerge back into a marsh near me in northern Oakland County.

Green frogs are holding off on their songs for now, since their mating season has not yet begun. A careful observer may see a few sitting along the edge of a pond waiting for a bug to fly into range. Don’t expect much in the way of song now, but toward the end of the month you may hear their territorial call that sounds a bit like a banjo being plucked. Their chorus explodes into activity in May.

Bullfrogs are also silent for now. Give them at least a month before expecting to hear their deep baritone mating song. However, a careful observer may soon spot one now in a motionless pose waiting for a smaller creature to come within ambush range.

Gray Treefrogs create a short duration shrill song that may be mistaken for a bird song, an off-key cicada, or even some unknown insect hidden on a tree branch. They too will be silent for a while longer until the temperature and humidity rises. I look forward to their presence in late April when they begin appearing on my porch railings to ambush insects attracted to a light at night.

But I am most excited to see one in particular. This handsome fellow “hangs out” quite literally in a bluebird nest box on the edge of my arbor on the wilder side of Oakland County.

2 thoughts on “Hopping & Slithering Into Spring!”