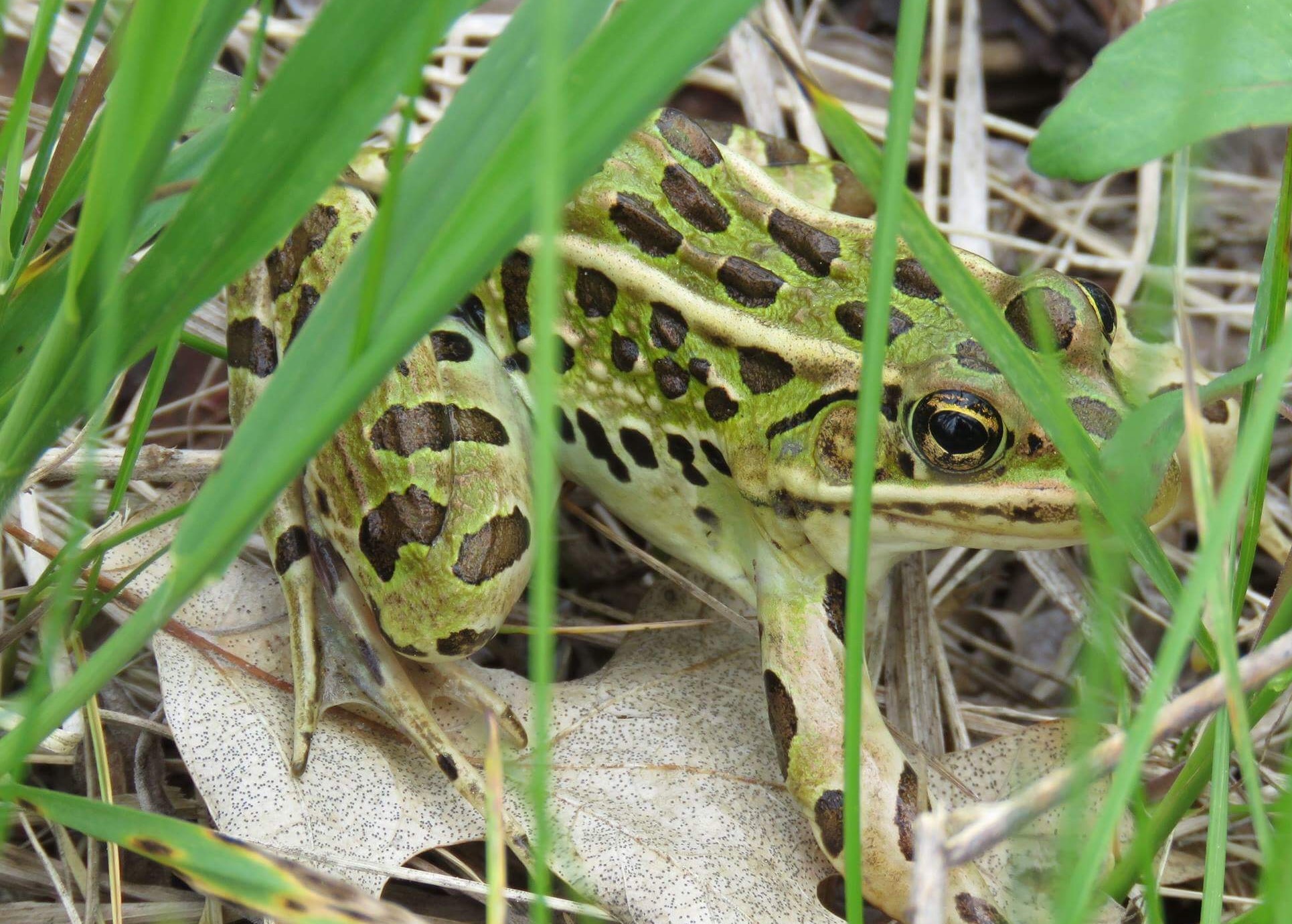 Some of us may already be familiar with our northern leopard frogs (Lithobates pipiens), but not as one of nature’s most wondrous amphibians. Instead, as a formaldehyde-soaked specimen splayed out in a dissecting pan awaiting the cutting edge of a scalpel in the high school science lab. This way of “studying anatomy” is falling to the wayside, coupled with chemical contaminants in the environment. The widespread destruction and degradation of habitats and populations of semi-terrestrial northern leopard frogs have been greatly reduced across much of their historical range. 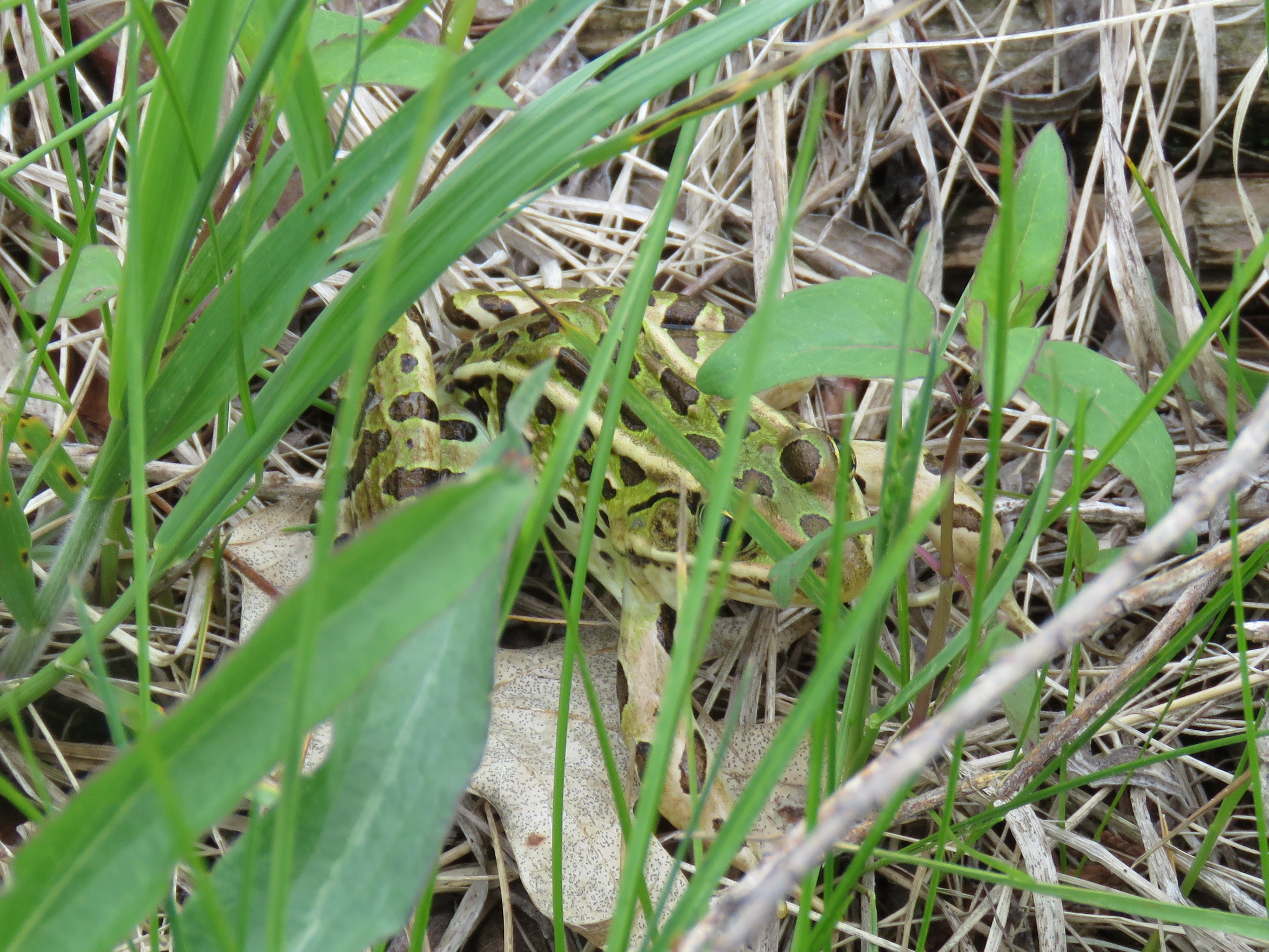 However, here in Oakland County there are large pockets of protected lands mostly free of chemical contamination where they not only survive, but thrive. Those sites include wet prairie habitat, wide open meadows near wetlands, and dew-moistened fields. Some of these habitats are located on private lands but most are within the boundaries of Huron-Clinton Metroparks, Oakland County Parks, Michigan DNR State Recreation Areas, and the edge zones of the Paint Creek, Polly Ann and Clinton River trails. Some of these habitats are also located on high quality lands managed by the Six Rivers Land Conservancy, the North Oakland Headwaters Conservancy, and the Southeast Michigan Land Conservancy. 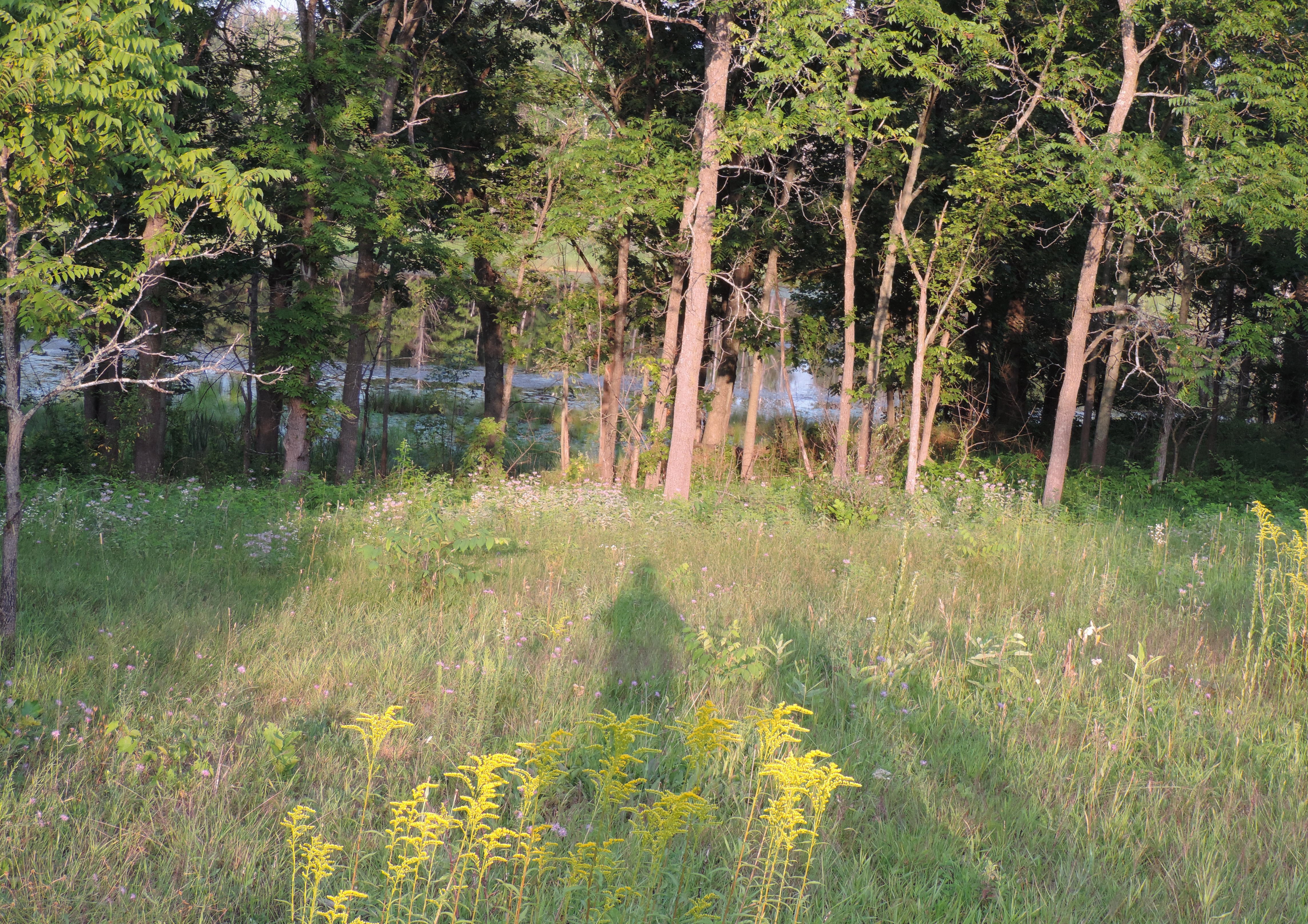 A leopard frog is rarely spotted on suburban lawns, for that chemically altered and closely cropped habitat is lacking in prey species and as dangerous to their very existence as it would be for the frog to spend an afternoon in a mega-mall parking lot near a pond. They may be found however, where subdivisions with wild habitats that provide the matrix of natural features needed by these frogs to survive and reproduce. When one is seen, things may become exciting. “I can’t catch it mom, it’s jumping way too fast! It keeps zig-zagging away!” That excited, yet frustrated cry from your frog chasing child likely confirms the escapee was a northern leopard frog, not a green frog, or a bullfrog, two species that don’t “lawn-loiter” and simply jump back into the water when danger approaches.

Head for a grassy meadow not far from a natural wetland, the marshy edges of healthy woodlands or slow moving streams, and you may encounter one of these lawn leopards stalking their prey. Once detected and feeling threatened, they rapidly flee with amazingly long leaps of over four feet in a zig-zagging pattern and then vanish in tall grass or slip back into a wetland, making it tough for a four-legged, two-legged or no-legged predator to make a capture. A few little kids and I were sorely disappointed at the inability to catch a leopard frog for a close up look. Capturing images is often difficult too, for they do not usually “pose” for a photo shoot in shallow water like a sun-soaking green frog dreaming of juicy bugs and careless dragonflies. 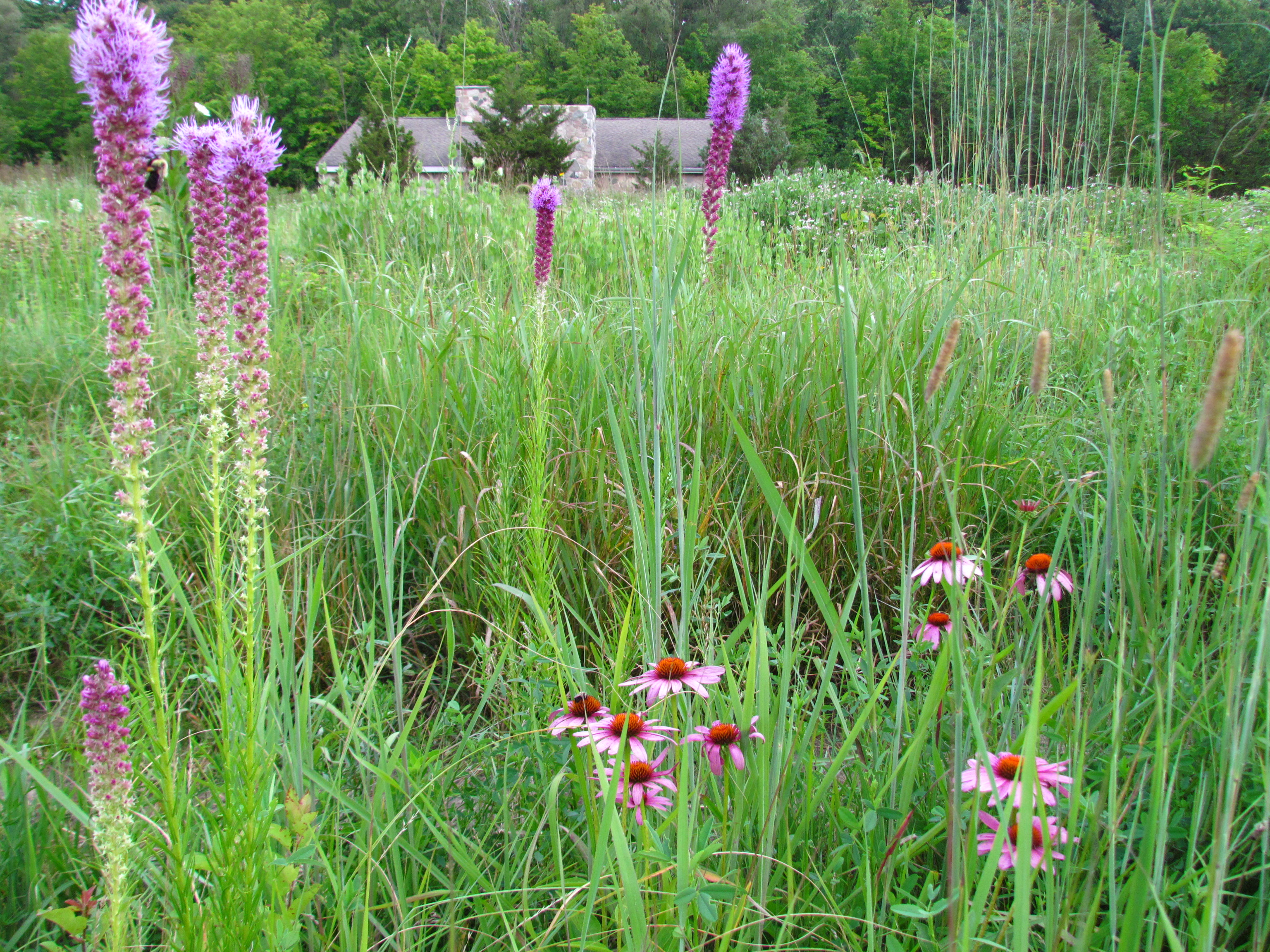 Last summer I played cat and mouse with a leopard frog for about ten minutes before I managed to capture a few images of that evasion and escape artist near Richardson Lake at Rose Oaks County Park. After managing a few photos I left it alone, for it has enough natural predators without harassment from me. Their list of predators is about as long as the length of their leaps and includes bass, pike, great blue herons, green herons, American egrets, green frogs, bullfrogs, northern water snakes, garter snakes, skunks, hawks, gulls, raccoons, foxes, coyotes, mink, otters, turtles, and humans that savor the flavor of frog legs.

The northern leopard frog derived its name not from its leopard like stalking habit, but from its irregularly shaped dark spots that adorn its back and legs. That pattern helps camouflage the frog when it hunts in the shadowy world of moist tall grass across the county. Unlike the green frog and bullfrog that spend most of the summer in the water or immediately adjacent to the water’s edge, the northern leopard frog, which is also known as the “meadow frog” may be well away from the water hopping and hunting in its favorite “find-a-meal” habitat, tall grass. 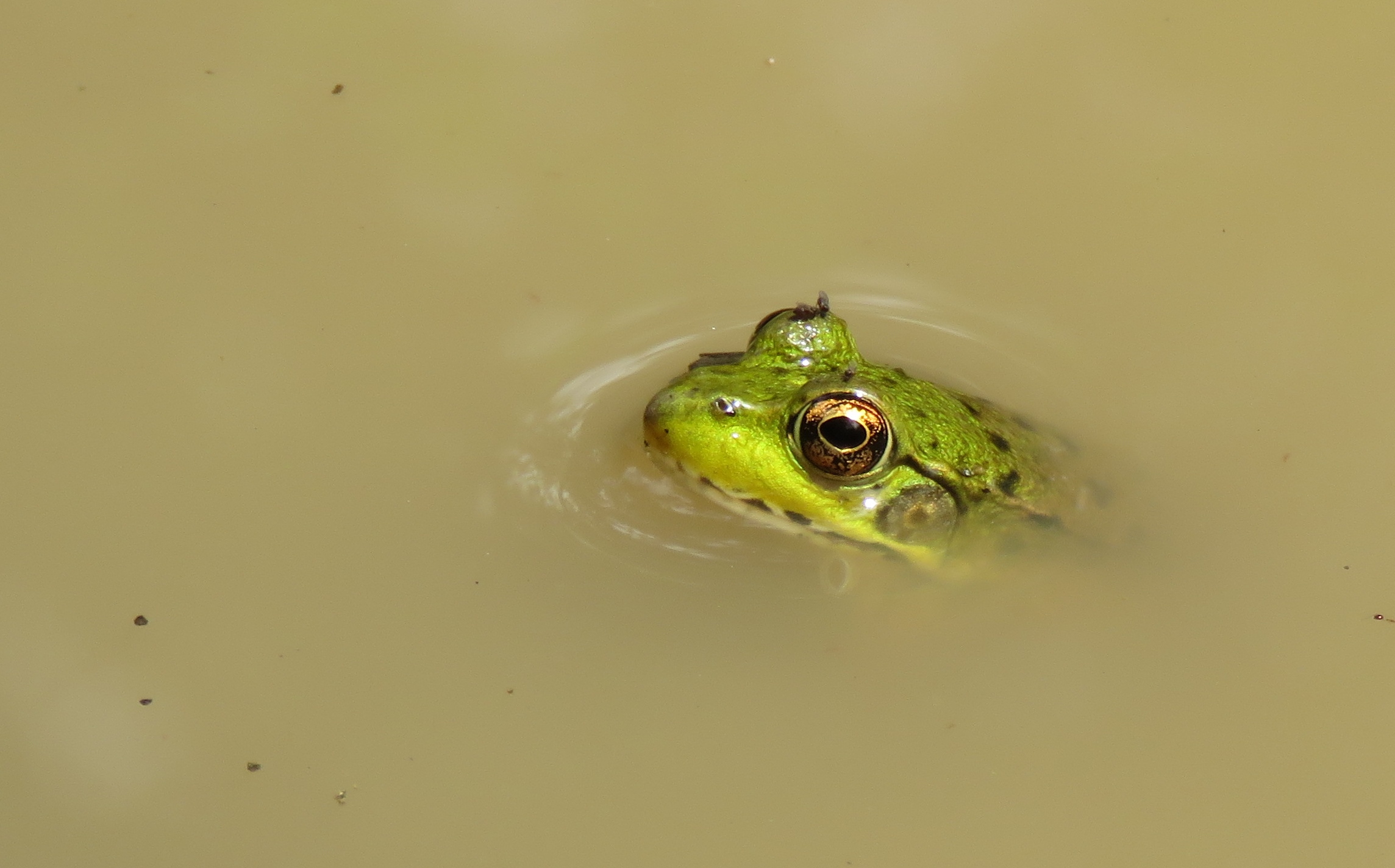 Michigan has another frog species, the pickerel frog that is sometimes misidentified as a leopard frog. Once you know what to look for, it’s relatively easy to tell them apart, especially if you can catch one-which is easier said than done. Pickerel frogs have two parallel rows of dark brown spots edged in black running the length of their back and tend to be brownish. The leopard frog is green or greenish-brown and the spots on a leopard frog’s back are more randomly placed, are more oval than square and have a faint whitish halo around them. A sure way to tell them apart is hidden underneath, but that means catching the frog, good luck! The thighs of a pickerel frog are yellow, while those of leopard frog are a creamy white color.

Now that breeding season is over, leopard frogs are solitary creatures. However back in early May they gathered in breeding ponds, where males established small territories and were most active at night as they snag their territorial love ballads. Here’s an excellent sound recording from the Michigan Department of Natural Resources. 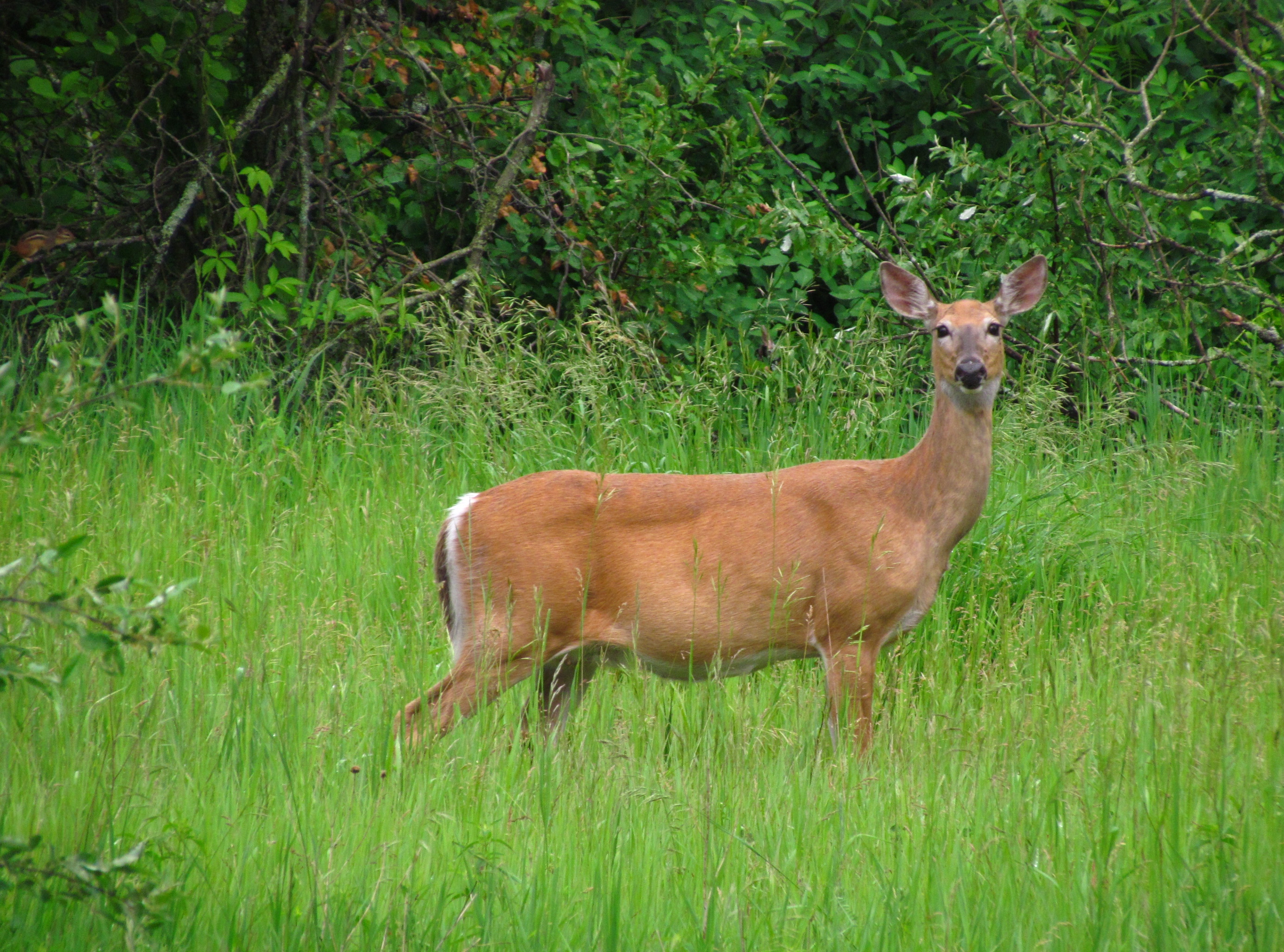 The sultry days of summer are a perfect time to keep an eye out for our leopard frogs. You’ll find them where their food is and they are highly opportunistic feeders. If it fits in the mouth, it’s dinner. The summer meadow menu includes crickets, grasshoppers, earthworms, slugs, snails, ants, leafhoppers bugs, beetles, spring peepers, and even baby snakes. Perhaps now is the time to head back to the fields and meadows of Oakland County to search for our frog that seems to have jet propulsion legs. Even if you don’t see one, meadows are always full of surprises, and wildlife encounters are likely. My last attempt at photographing a leopard frogs failed, but my patience was rewarded with a deer that came closer to watch me.