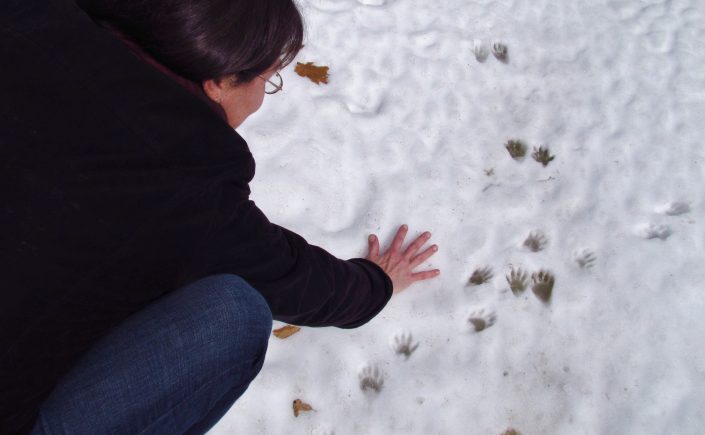 Winter is the perfect time to search for wildlife tracks. No matter how bold or stealthy the wanderings of a wild creature might be, tracks in the snow expose identities – and sometimes create mysteries. Tracking in snow can be fantastically easy, as in the case of clear raccoon tracks near a bird feeder, or it can be deceptively tricky when tracks distort and expand during snow melt. A bare footprint of a human in snow turns into something that is Sasquatch size, and a house cat track might morph into a mountain lion. One thing is certain, winter wildlife tracks are fun to explore, and many park agencies have winter tracking programs. Check with your nature center or park agency for details! 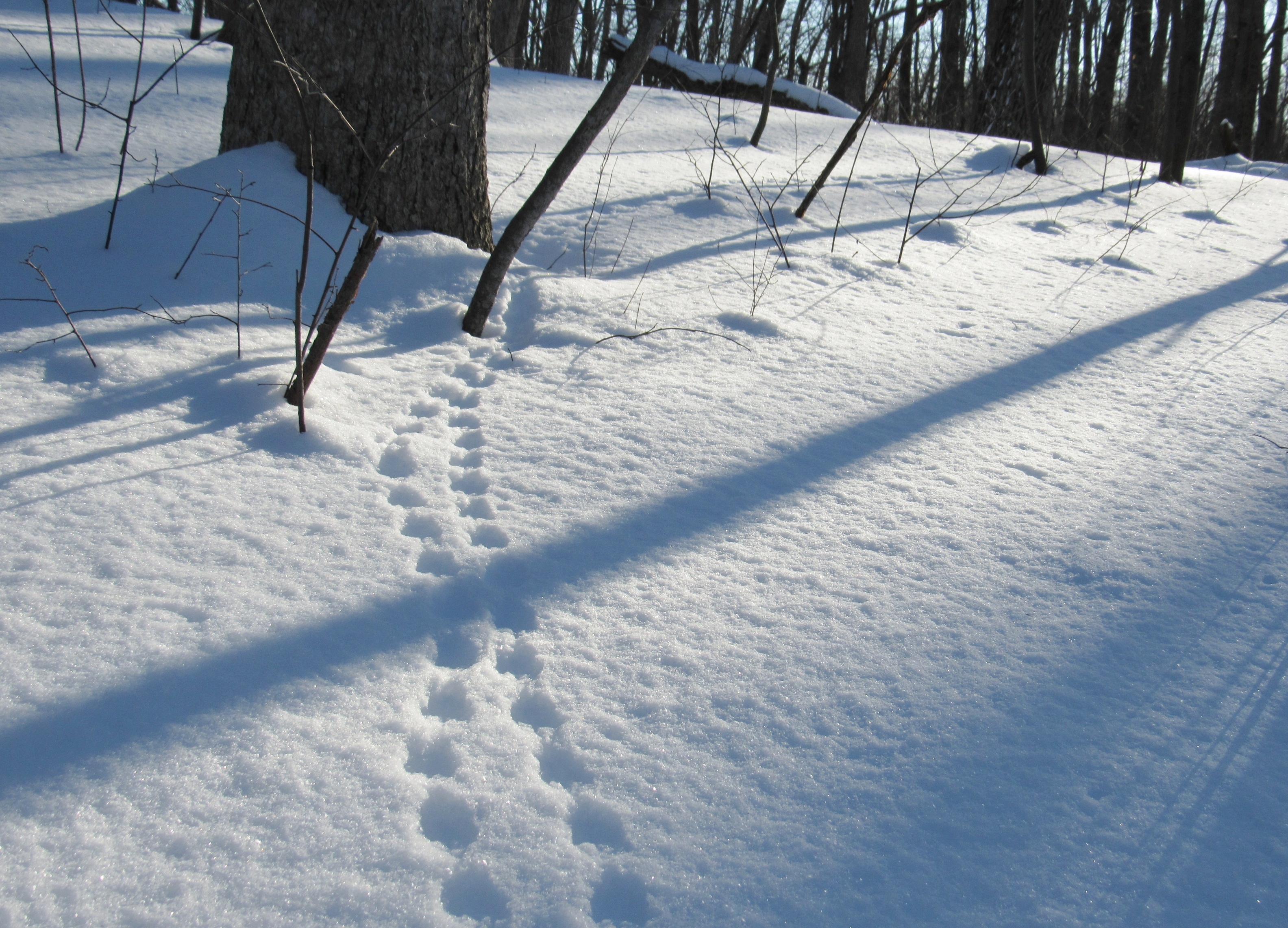 Red Squirrel: The evenly spaced and opposite placement of the paw prints indicate a squirrel bounding through the snow

A story cast on the easel of snow often takes thought and interpretation to fully understand. Albert Einstein once said, “Imagination is more important than knowledge.” Keep those words in mind, and they just might be your key to identifying wildlife tracks found in Oakland County. Here’s a tip: consider bringing a child on your explorations, for their imaginations are not confined by preconceived notion. They mix imagination and knowledge in the most natural way. 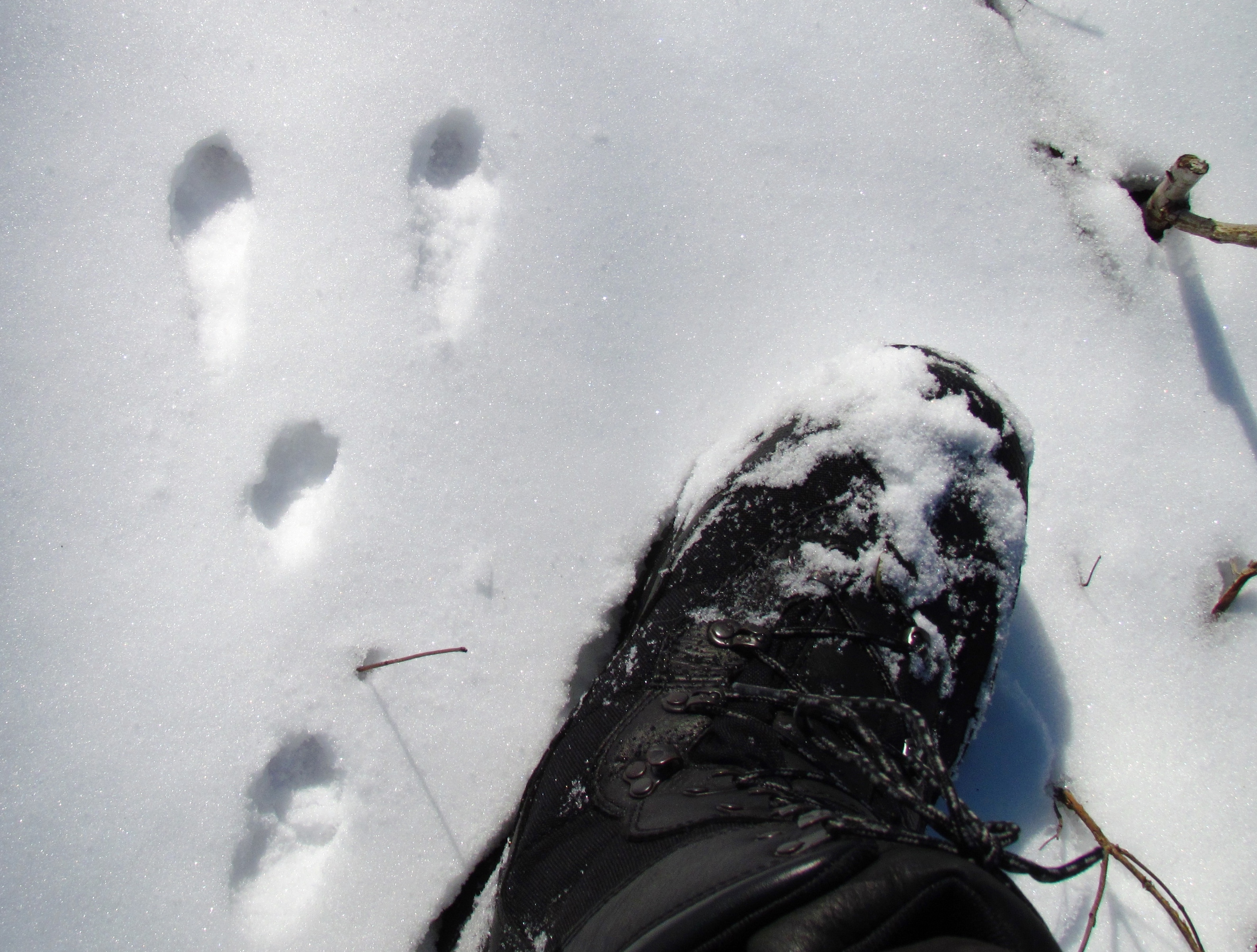 Rabbit: The larger hind feet that are placed side by side indicate direction of travel. The rabbit is heading from the bottom to the top of image 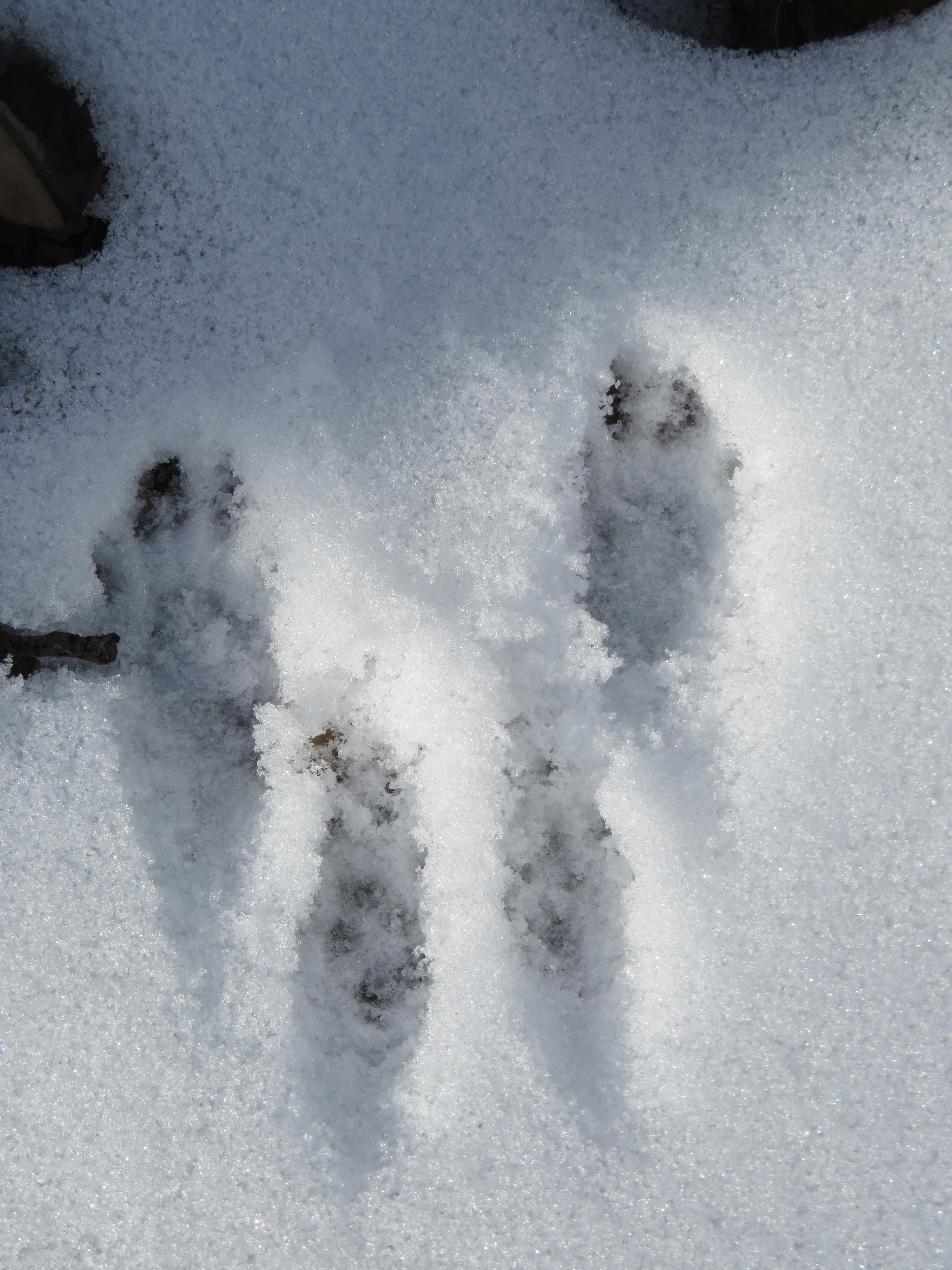 Squirrel: Front feet are placed side by side, as are their hind feet, and the larger hind feet show direction of travel

The same placement of hind feed in front of front feet holds true for squirrels. Although the tracks of rabbits and squirrels appear similar to the untrained eye, a quick comparison shows the differences. As rabbits leap forward, they plant their front feet down one in front of the other and land with their back feet in the front, in a side by side fashion. Sometime the front feet appear as one image in fluffy snow, leaving the impression of a three-footed creature. Squirrels move much the same way, except at a greatly accelerated pace. Their front feet, unlike those of the rabbit, land side by side, behind the hind feet. The fluffier the snow, the more the two species appear to leave similar tracks. If the track ends at the base of a tree, it’s safe to assume it’s a squirrel, unless of course a rabbit learned to climb trees.

White-footed mice leap, and their front feet land side by side as do their hind feet, unlike the meadow vole that leaves an alternately placed stride pattern. Close observations sometimes even reveal where the tail of the mouse swept against the snow. A mouse trail often leads to a tiny plunge/escape hole in the snow, a gateway to a cache of seeds. Sometimes it ends abruptly in a clearing where the mouse met its untimely end in the talons of an owl, documented by large shadowy wing prints in the snow.

Rewards of winter tracking are rich and bring sightings

Deer tracks and deer trails vary according to the depth and consistency of the snow. The foot of the deer ends in a cloven or two piece hoof, making track ID easy when they move across minimal snow covering. However, when trudging through deep snow, the actual track can be obscured. In that case only a deep trail cut into the snow shows.

Both the eastern coyote and the red fox leave straight line tracks, unlike the tracks of a domestic dog

Coyote tracks are usually in a nearly straight line, unless they accelerated with a burst of speed. The daintier red fox also leaves a rather straight looking trail with one paw landing in front of the other. The tracks of both species are often noted along park trails and along lake shores, where trekking is easier.

Coyote tracks in foreground, turkey tracks on ice in background

The large three-toed impression of turkey tracks are unmistakable and give clues as to their feeding habits. During winter they congregate in flocks in sheltered areas. It’s hard to sneak up on wild turkeys, but if the tracks suddenly just end near a cluster of trees – look up! You may have found their roost. 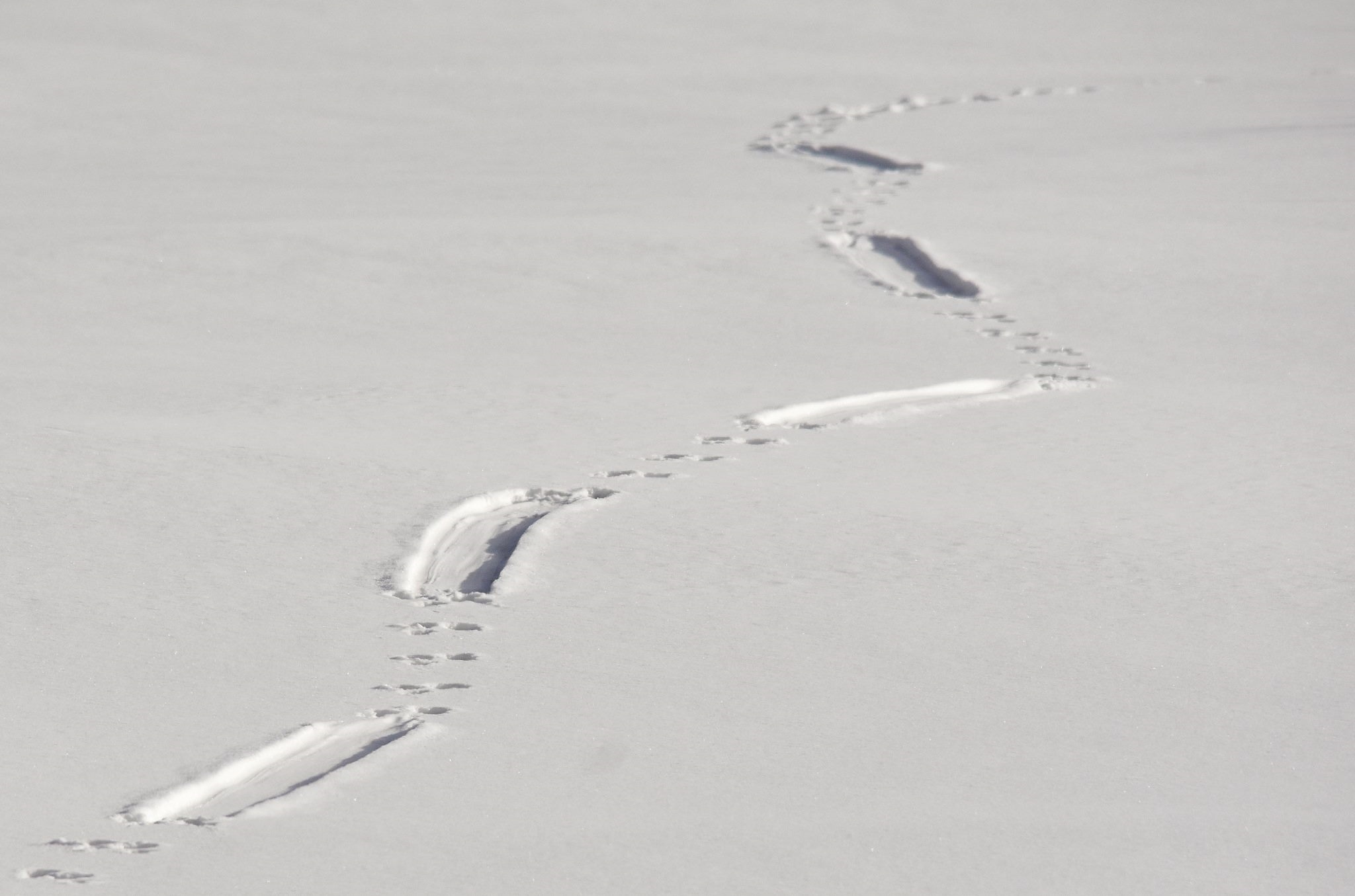 The rarest, and least seen large mammal of Oakland County is the North American River Otter. These carnivorous creatures are masterful swimmers, have webbed toes, can weigh 25 pounds and are four feet long including the tail. On land they bound about, and run very well. They often playfully slide down snowy river banks and sometimes bound and then slide along snowy fields leaving one of the most intriguing tracks that might be found on the wilder side of wetland rich Oakland County.

The otter “bound-and-slide” photo is shared courtesy of Tom Koerner/U.S. Fish and Wildlife Service and his image was captured outside of Oakland County.