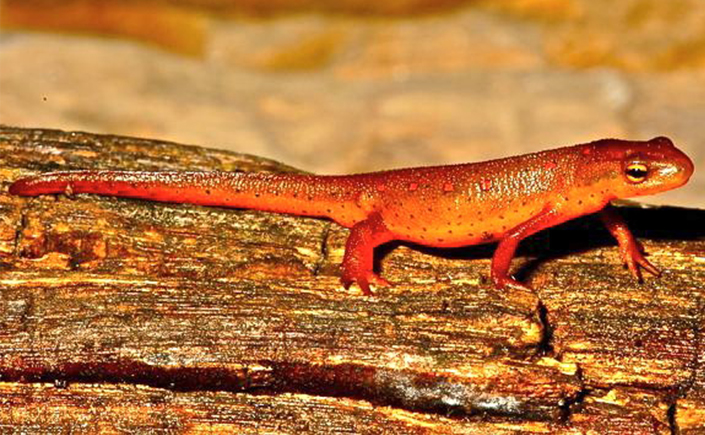 The lifestyle and behavior patterns of the elusive red-spotted newt (Notophthalmus viridescens) is very strange, at least in the eyes of humans. The red-spotted newt, and its reddish-orange terrestrial sub-adult stage known as the red eft, is perhaps our most beautiful salamander, a creature herpetologists refer to as a “gape-limited predator.” For the lay person, that translates as “If it fits in your mouth, its food.”

Most people have never seen an adult red-spotted newt in the wild, unless they are an amphibian lover that flops down on their belly and stares into a vernal pool in the early days of spring on a rainy night, hoping for a glimpse of their underwater courtship ritual. That takes planning, persistence and patience. Encountering the juvenile land-trekking terrestrial form of the red-spotted newt, known as the red eft, is far more likely for those that wander woodlands with an eye to the ground, watchful for movement among leaves on the forest floor. 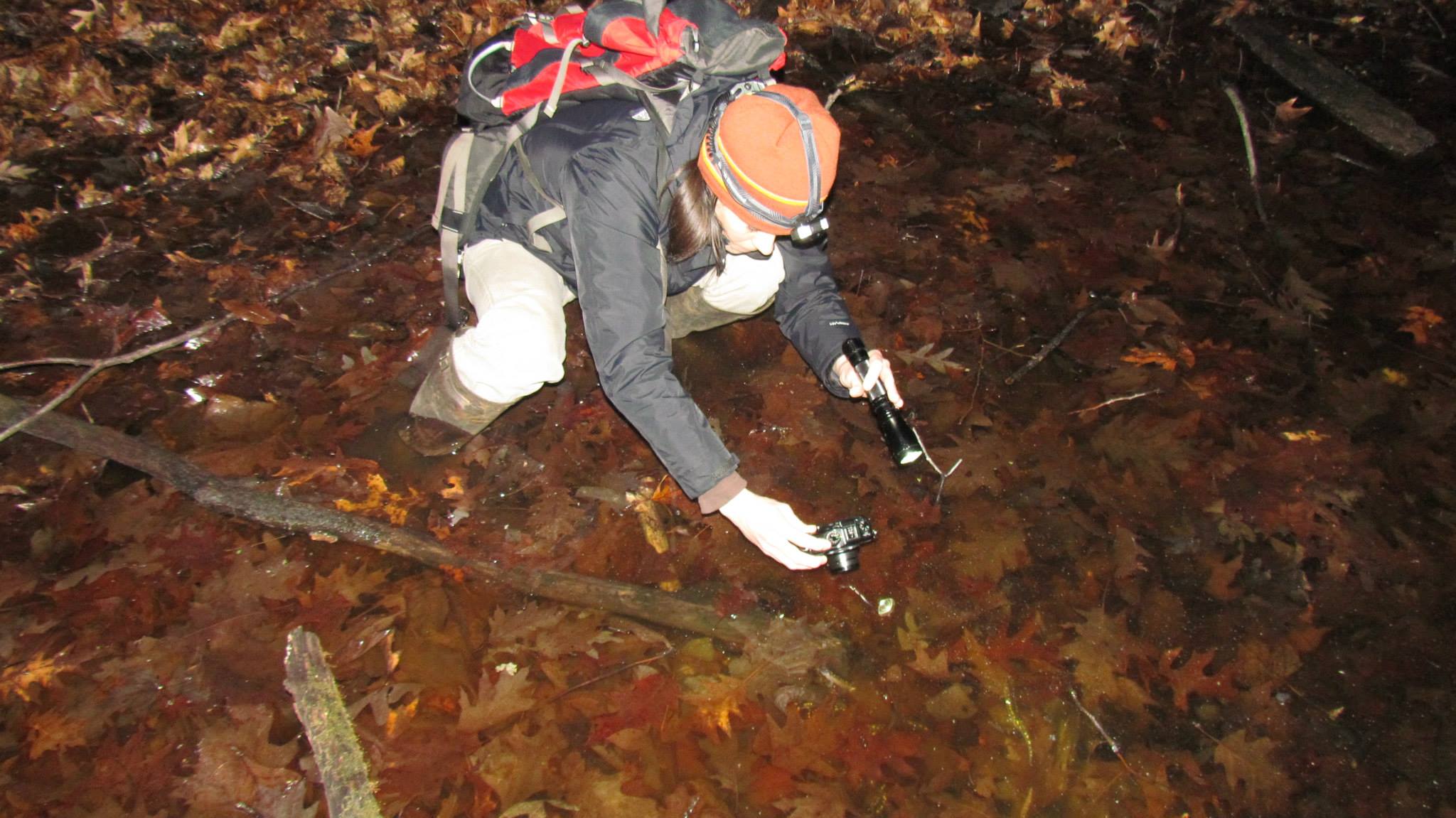 So why am I writing about red efts now, as winter teases and wandering efts seemingly go missing? Here’s why: They are still occasionally noted as the duel between the seasons accelerates, and perhaps more importantly, these newts are an important lesser known creature of our terrestrial and aquatic ecosystems. Another great reason is the red spotted-newt adult is a voracious consumer of mosquito larvae, making them very much at home in many of our healthy wetlands that abut fertile woodlands.

The names newt and salamander are sometimes used interchangeably. They should not be, a fact I just learned recently. As my herpetologist friends patiently explained, “Newts are a type of salamander, belonging to a subfamily called Pleurodelinae of the family Salamandridae.” In much easier to understand terms, that essentially means all newts are salamanders, but not all salamanders are newts. The differences between salamanders generally, and newts specifically, become apparent when looking at their life cycles and behavior. Adult newts lead a mostly aquatic life, while adult salamanders (excluding newts) are only in wetlands and vernal ponds when they’re breeding and laying eggs. Most newts also have webbed feet and a tail that is rather paddle-like, which make it easier to move about in the water. Salamanders have more rounded tails and toes adapted for digging in moist soil. Michigan is home to ten species of salamanders, and one of those species is the red-spotted newt, also known as the Eastern Newt, the only newt found in Oakland County. The Michigan DNR website has basic information on all 10 species, including the red-spotted newts that live rather secretly in our midst.

The red-spotted newt and red eft population must have woodland habitat with adjacent marshes, beaver ponds or permanent ponds with aquatic vegetation if they are to survive. Glacial action some 10,000 years in Oakland County created a suitable matrix of land and water. Many of our State Recreation Areas, Metroparks, Oakland County Parks and wildlands managed by the Six Rivers Lands Conservancy and North Oakland Headwaters Conservancy fall into that suitable habitat category. But even with good habitat, efts often go unseen. They are tiny and their walks in the woods usually go unnoticed. I have only seen a red eft once this year in Oakland County and that was on a rainy morning last spring along a leaf-strewn trail at Timberland Swamp Sanctuary, a Michigan Nature Association sanctuary in Oakland County with excellent salamander habitat.

In Michigan, the breeding season of the red-spotted newt lasts from late winter into early spring, a time of great excitement for those that stalk these elusive salamanders. My biologist friend Amanda Nimke Ballard, who has the patience to be crouched in shallow water on cold spring nights to photograph our newts at their vernal ponds and witness their mating rituals, shared images with me.

University of Michigan Museum of Zoology explains their life cycle this way: “Eggs develop for 3 to 8 weeks depending on the water temperature. In early fall, 3 to 4 months later, the aquatic larvae lose their gills, develop sac-like lungs and emerge onto land as an eft. Two to three years later, the eft develops a powerful flattened tail and returns to the water to breed. Adults remain in their pond or lake for the rest of their life, if the water is permanent, or spend dry seasons on land and move back to the water in the spring (wet season). Some eastern newt populations skip the eft stage and immediately transform into breeding adults.” I contacted Jim Harding, an Instructor at the MSU Dept. of Integrative Biology for a bit of clarification and he wrote, “Keep in mind that adult newts (transformed after eft stage) are greenish and sport the tail fins as long as they are in reliable water. If the pond dries up, they can become terrestrial again, turn darker and lose the tail fin, but they do not revert back to efts.” 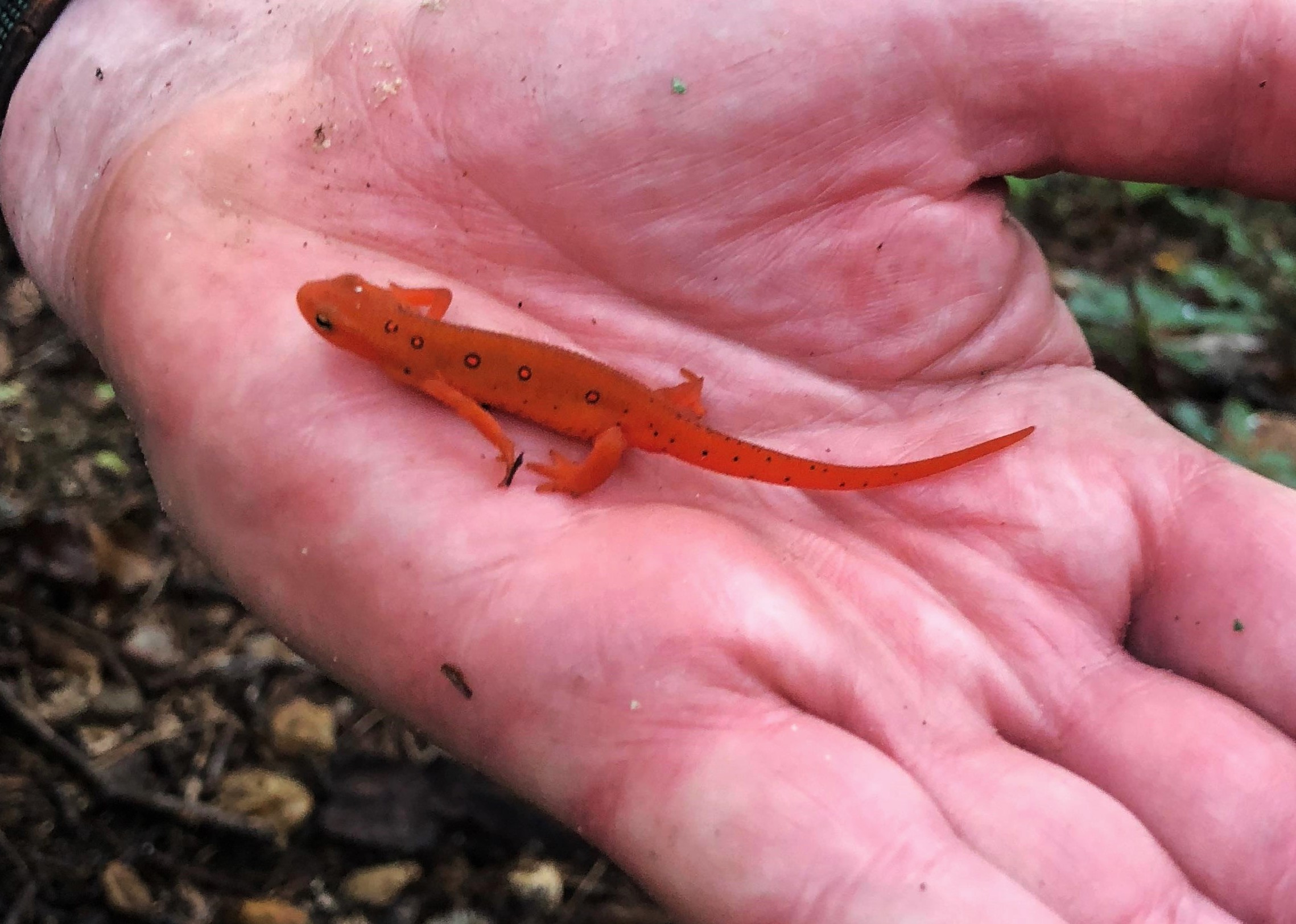 As the leaf fall of autumn progresses, the aquatic adults are where they usually are, going about their life in many types of waterbodies, including the marshy edges of our beautiful lakes now edged in spectacular autumn colors. It’s worth noting that the red-spotted newt is an extremely adaptable and they are able to hibernate on land if the pond is so shallow that it will freeze. As for the red efts, some still wander on warm late autumn days, but before the first hard freeze takes hold they all wiggle under thick layers of leaf litter and decaying logs, a perfect habitat for winter hibernation. Early next spring when rains melt remaining ice on vernal ponds, the adult newts start their underwater breeding rituals, and the red efts continue their forest floor wanderings until they are old enough to transform into red-spotted newts and give up their terrestrial life. Together they keep their mysterious cycle of life moving forward on the wilder side of Oakland County. 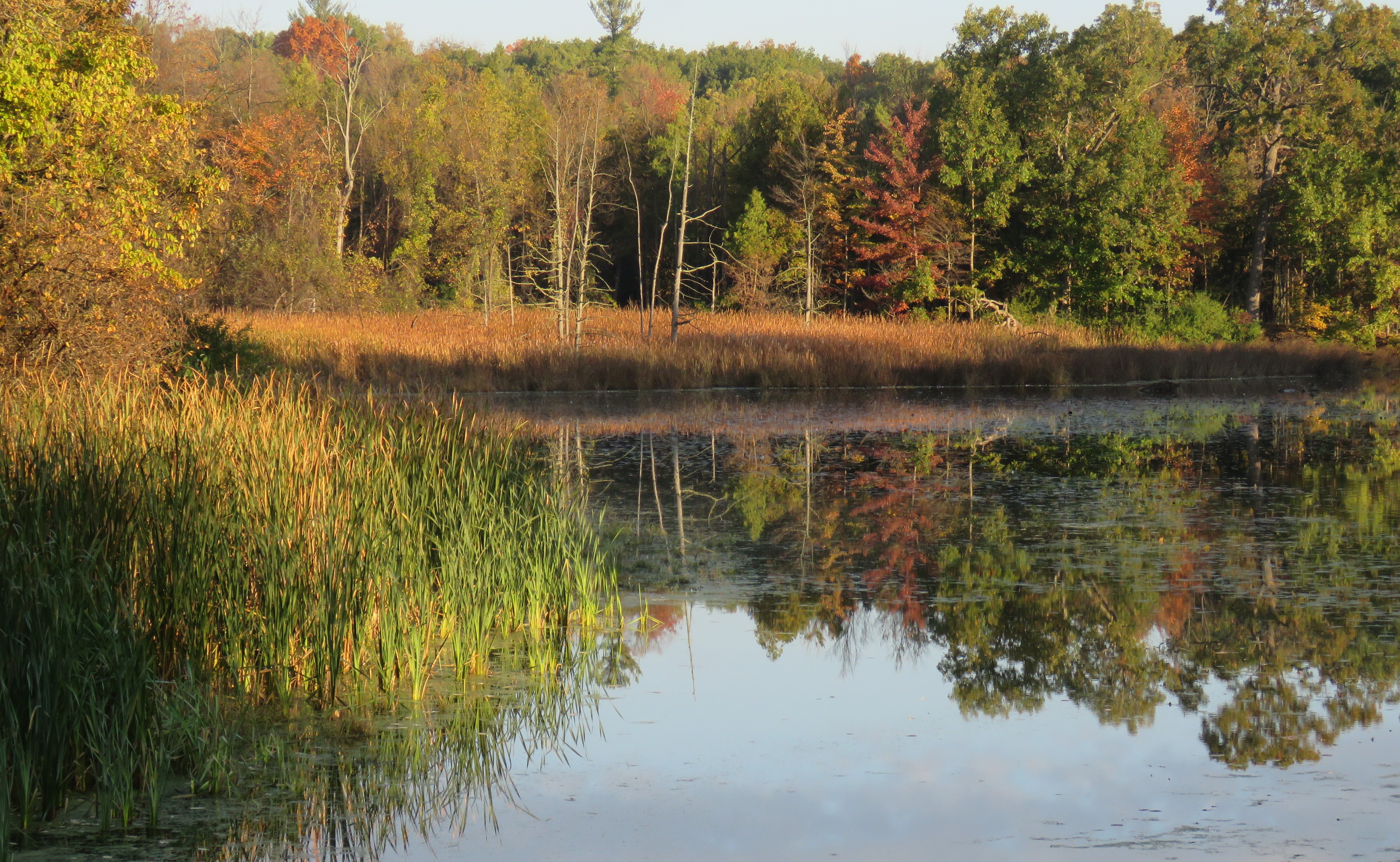