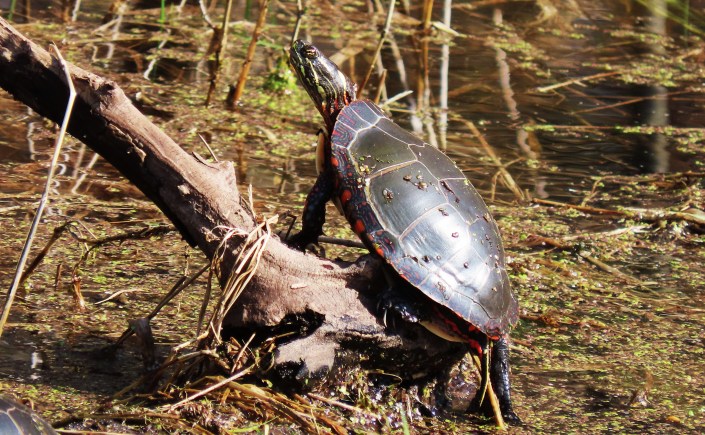 It has been said that October was the big spender, with the paycheck going to bird migrations, fantastic tree colors, and the fluff of milkweed pods floating freely in the wind. It was also the perfect weather for Painted Turtles to bask in sunlight, and that’s what they were doing. Some of them were even perfectly positioned to be captured by my camera, others coated with duckweed, slipped back into the water with barely a splash at my not-so-stealthy approach.

Late October and early November have been unseasonably warm. As hours of daylight decrease, some changes in wildlife behavior become obvious and are easily witnessed and understood. Muskrats built food storage mounds from cattails and mud, honeybees went on final foraging flights and the fur coats of our white-tailed deer increased in thickness. Groundhogs made final treks topside to gain more weight before hibernation.

Although many Canada Geese now overwinter in Oakland County, others are flying south after final feasts on terrestrial and submerged vegetation. Many robins spend the winter here as well, by simply adapting to the conditions and switching from worm-slurping to feasting on dried berries, and on extremely cold days, just fluff their feathers to trap a layer of insulating air.

But what you may not have known is that now is the time painted turtles go to the bottom of their ponds and prepare for their strange, life-sustaining transition that starts when the ponds ice over and continues until the ice is gone. Winter is coming and it won’t be long until our local ponds and wetlands freeze over. Once I know the ice is really thick, I may venture out a few feet onto a pond near my house. When I bundle up and make that cautious trek, while keeping in mind that no ice can be guaranteed to be safe ice, I’ll be thinking of painted turtles snug in the mud down below the surface. Their ability to survive a mild winter or six months of a harsh winter without coming up for a gulp of air is one of the more interesting characteristics of these amazing reptiles.

Turtles are obviously year-round residents and once ice forms, they can no longer bask in the warmth of sunlight, nor can they breathe on the surface. So how do they survive? As cold weather begins to settle in, turtles become more lethargic and seek out the relatively deeper waters of our ponds and shallow wetlands. Their refuge for months on end will be the muddy bottom. However, during sunny winter days they will occasionally be seen swimming sluggishly and perhaps foraging under the ice, something I have read about often, but only witnessed once.

Painted turtles are ectothermic (cold-blooded) creatures, meaning their body temperature is influenced directly by their environment. During winter, they practice brumation, a process similar to a warm-blooded creature’s hibernation. Brumation is basically a physiological response to colder conditions that conserves energy and allows survival until warmer weather returns. A question remained for me and perhaps for you as well. How do these hard-shelled creatures that are out of sight under the ice for about six months get oxygen into their system? Holding their breath is not the answer, but is the answer I have received from children.

Painted turtles can breathe underwater using a process known as cloacal respiration, commonly referred to in literature as butt-breathing. Mention “butt-breathing” to a five or six-year-old and they will be rolling on the floor in laughter. A turtle’s cloaca is a multi-functional organ. It’s used for reproduction, egg laying, excretion, and breathing. In the breathing process, turtles pump water into their cloacal orifice by contracting muscles in their inguinal pocket. It’s simpler for me just calling it butt breathing, the secret to their winter survival under a layer of ice.