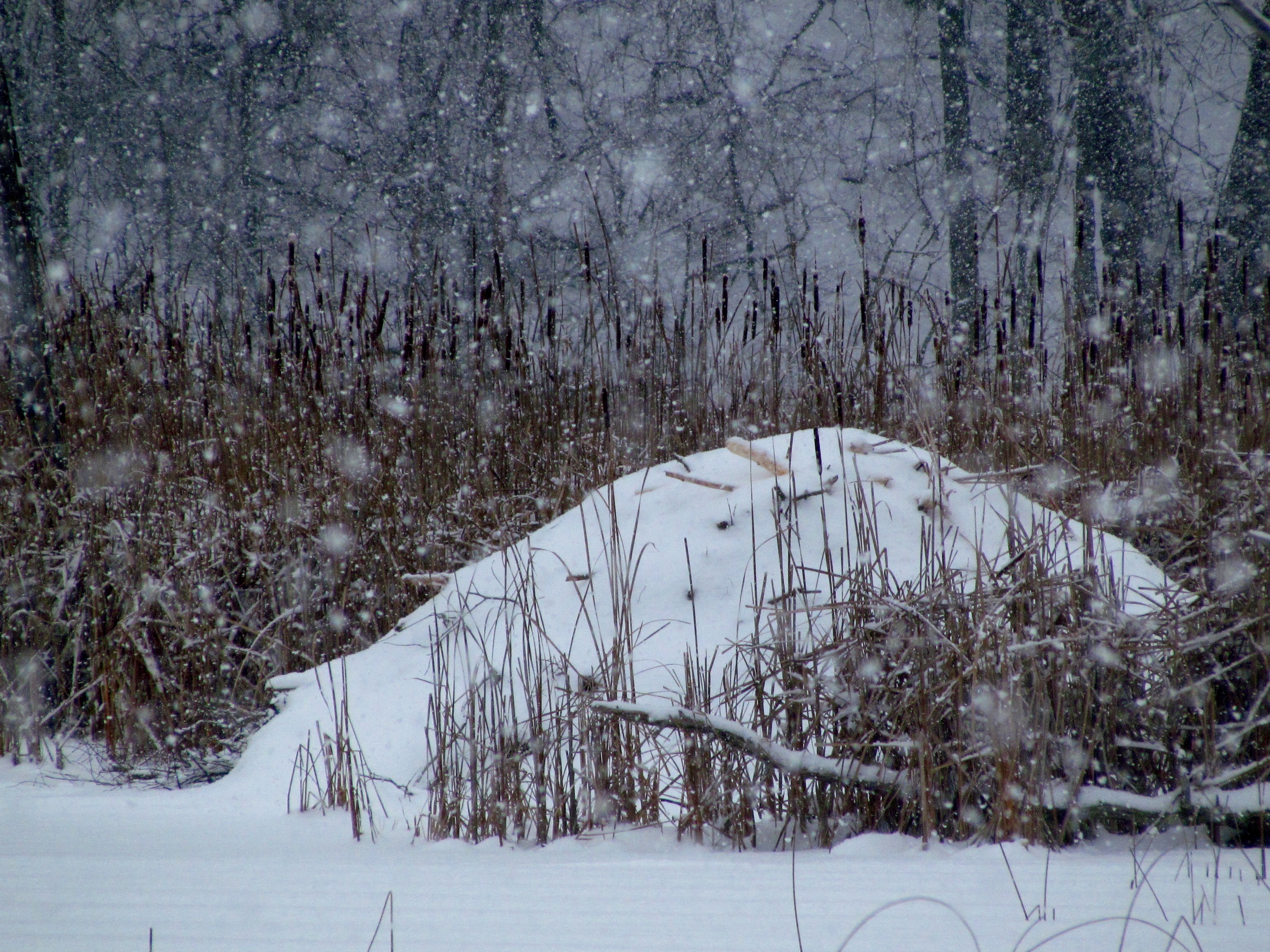 The shortest day of the year draws near. First ice is already forming in the shallows of marshes and wetlands. Those signals of nature’s way indicate that the clock of winter preparedness is rapidly ticking away for two semi-aquatic mammals that live in our midst, and are often confused: the beaver (Castor canadensis) and the muskrat (Ondatra zibenthicus). Both species are dependent on aquatic environments. Both species build lodges in the water. Both species can stay underwater for about fifteen minutes. Both have the ability to created dens in river banks and lakeshores by using the claws on their front paws. However, the muskrat loses out totally when it comes to felling trees. The beaver, and the beaver alone, is the master logger. 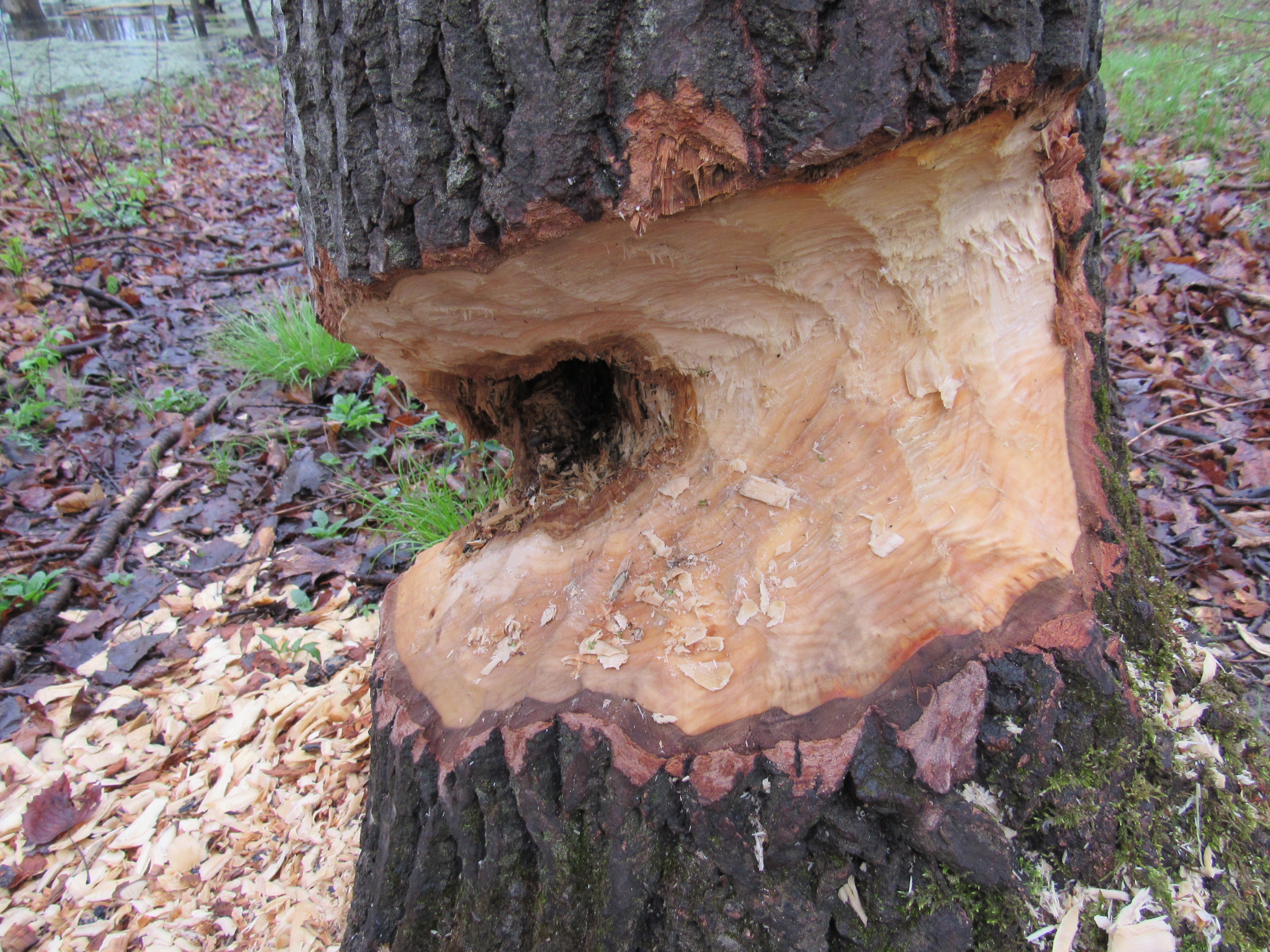 Contrary to common belief, muskrats are not closely related to beavers and that raises a question: How come so many of their physical and behavioral characteristics are shared? The answer is evolution. For as eons of time passed, they both developed traits through the slow, never-ending process of evolution that suited their particular habitats. The scientific term for that process is “convergent evolution”. Here’s how convergent evolution is often described in scientific literature,

“In evolutionary biology, convergent evolution is the process whereby organisms not closely related…, independently evolve similar traits as a result of having to adapt to similar environments or ecological niches. It is the opposite of divergent evolution, where related species evolve different traits.” 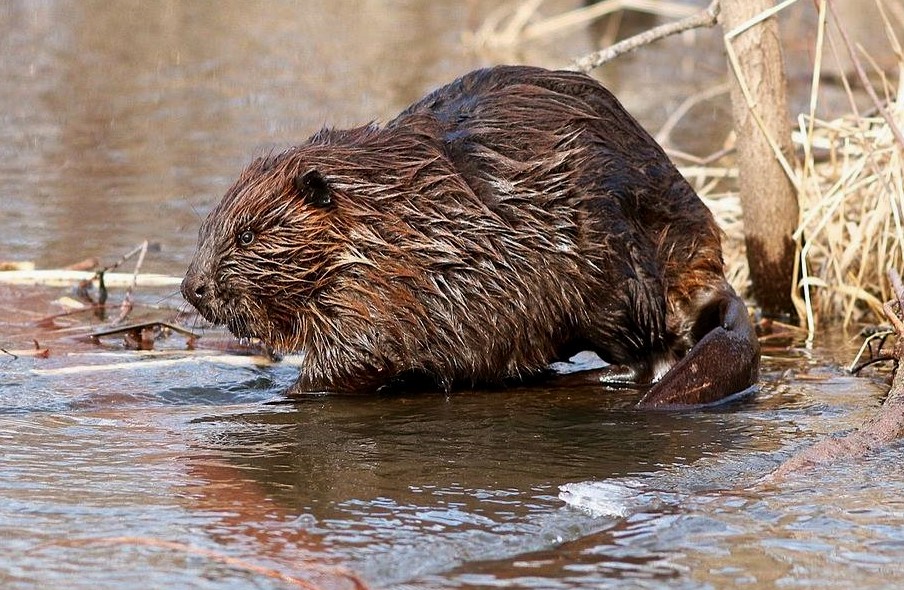 With those scientific facts behind us, just how does one tell a muskrat and its lodge, from a beaver and its lodge? It’s easier than one may think, and now with leaves down and distracting wetland-loving mosquitos absent, it’s easier to explore the wetland habitats of beavers and muskrats. Here are the basics on their natural history and winter living quarters, starting with the physical characteristics of the beaver and the muskrat.

Beavers are the largest rodent found in North America and can weigh over 60 pounds. Their body is well adapted to their water world, and they are also able to waddle along in forest habitat in search of trees to fell. Their large tail is flat, muscular and flexible, and serves as a prop when the beaver is gnawing through a tree. The tail also functions as a four-way water rudder, and their large, webbed hind feet help propel them along, as well as add strength to their ability to pull logs under water. Their delicate forepaws are extremely dexterous and function so well as ‘hands’ that they can carry small branches, mud and even stones. This video from PBS shows the amazing construction ability of a beaver when it uses its incisors to fell trees, and its forepaws to construct dams. 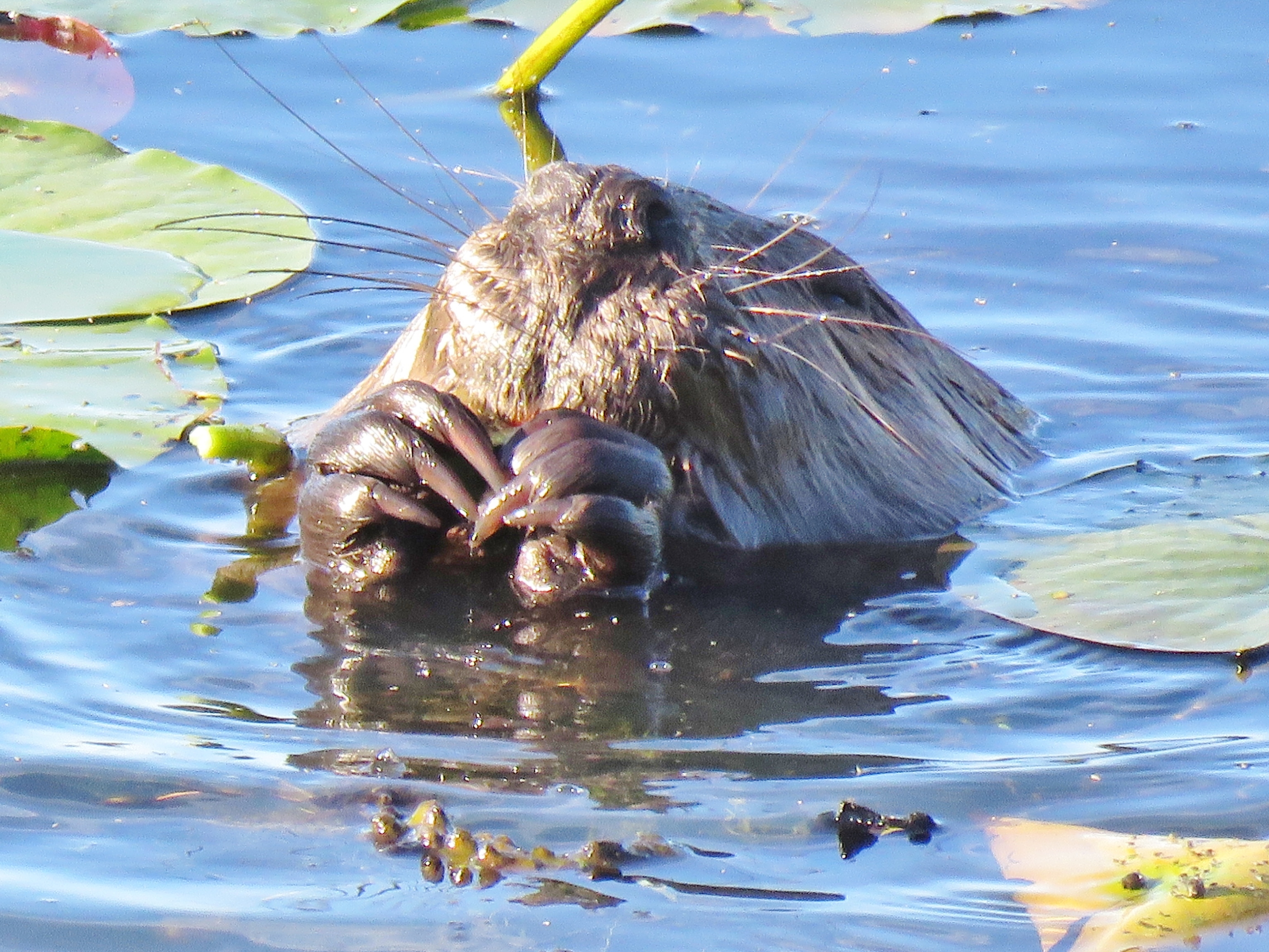 Muskrats average only two pounds and like a beaver, use their hind feet to assist with swimming. Their feet are not webbed, however, evolution gifted them with specialized hairs that grow on the sides of their long toes, enabling them to ‘push’ water and act a bit like a paddle. The muskrat’s long skinny tail is nearly hairless, flattened vertically, and when in motion helps propel the muskrat along the surface of the water. They are far more common than beavers and do well in most of Oakland County, being found in lakes, ponds, retention basins, wetlands and even roadside ditches.

Forgetting for a moment the obvious size difference, the swimming behavior of the beaver and the muskrat is very different, partially because the muskrat is more buoyant. When a muskrat is swimming, a careful observer will note two or three ‘humps’ above the water consisting of the head, the upper back and sometimes the entire tail. The much larger and heavier beaver shows just one hump exposed, the head. Sometimes, the neck and upper section of the beaver’s back is exposed, but as part of that one hump. The beaver also has the ability to loudly smack the water with its broad, flat tail as a warning, just as it dives to safety. The muskrat just slips back under the water leaving ripples.

A beaver lodge is unmistakable. They are large, well-constructed domed structures comprised of interwoven tree limbs as thick as human arms, smaller branches, twigs and mud. The mud, in addition to serving as insulation, helps hold everything in place. The lodge includes an interior platform above the water level, as well as a resting den, a feeding den, usually two underwater entrances and an opening for fresh air. Some lodges may be more than six feet tall. Sometimes they are in the middle of wetland or shallow pond, but in Oakland County almost every one I have seen has been very close to shore. Snow adds to the insulating factor of their sturdy winter home. 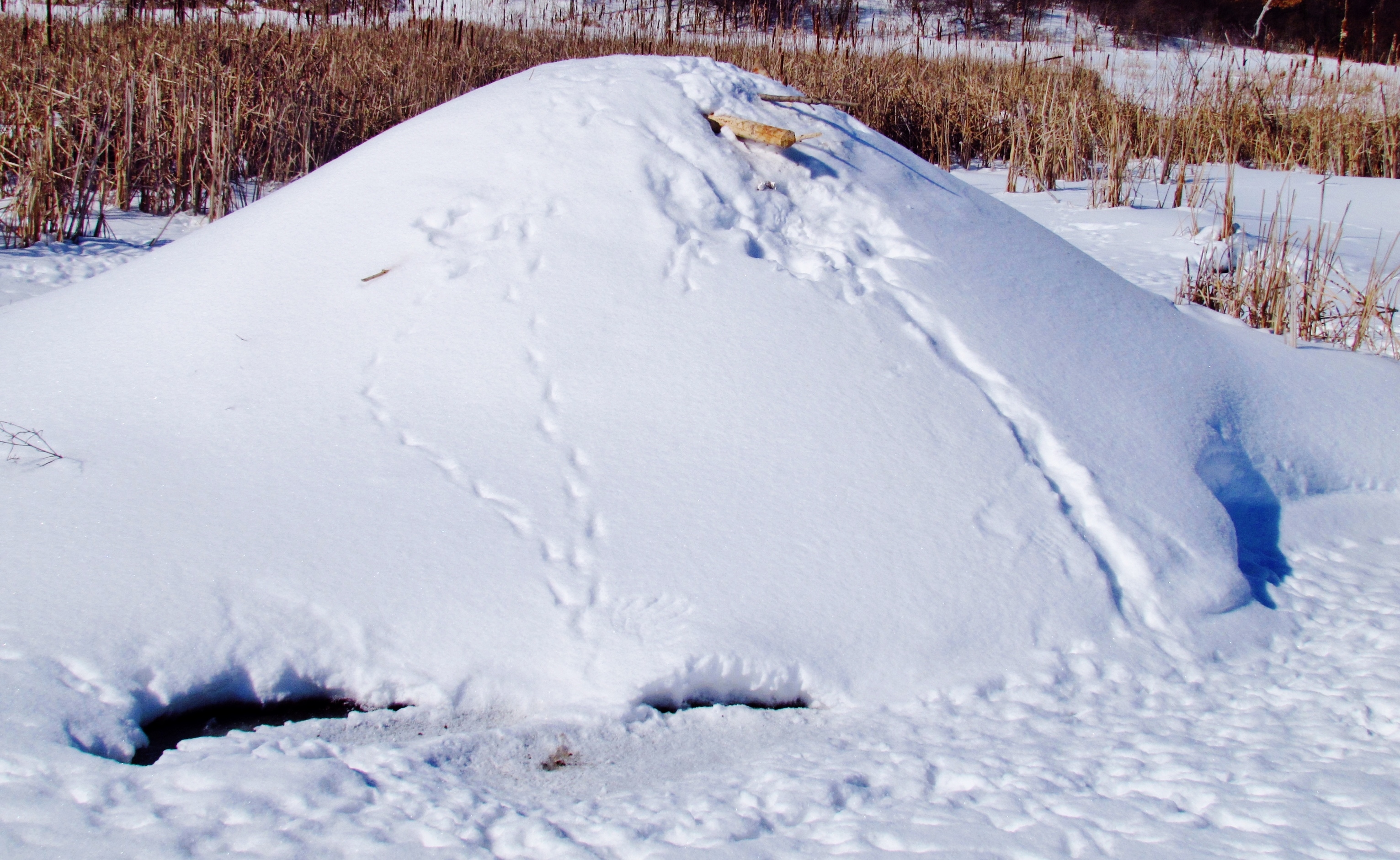 From the middle of autumn until ice forms, beavers fell trees for their winter survival cache. The cache is an accumulation of food to sustain them through winter, with the sugary inner bark as the main entrée. Their favorite local tree to be felled with their chisel-like incisors is aspen, but other species will work too. Once a tree falls, they gnaw through the large limbs to create a workable size that can be dragged to the underwater cache, usually located in deeper water within a few dozen yards of the lodge. The beaver even manages to jab the ends of the branches into the muddy bottom to create a food cache that won’t break apart. When it’s time to feed, it slips out of one of its underwater openings, swims to the ice cache below – the grocery store – and returns home with dinner. Hikers may note large trees that were gnawed and started to fall but were snagged by adjacent trees, a reminder that winter preparation is labor intensive. 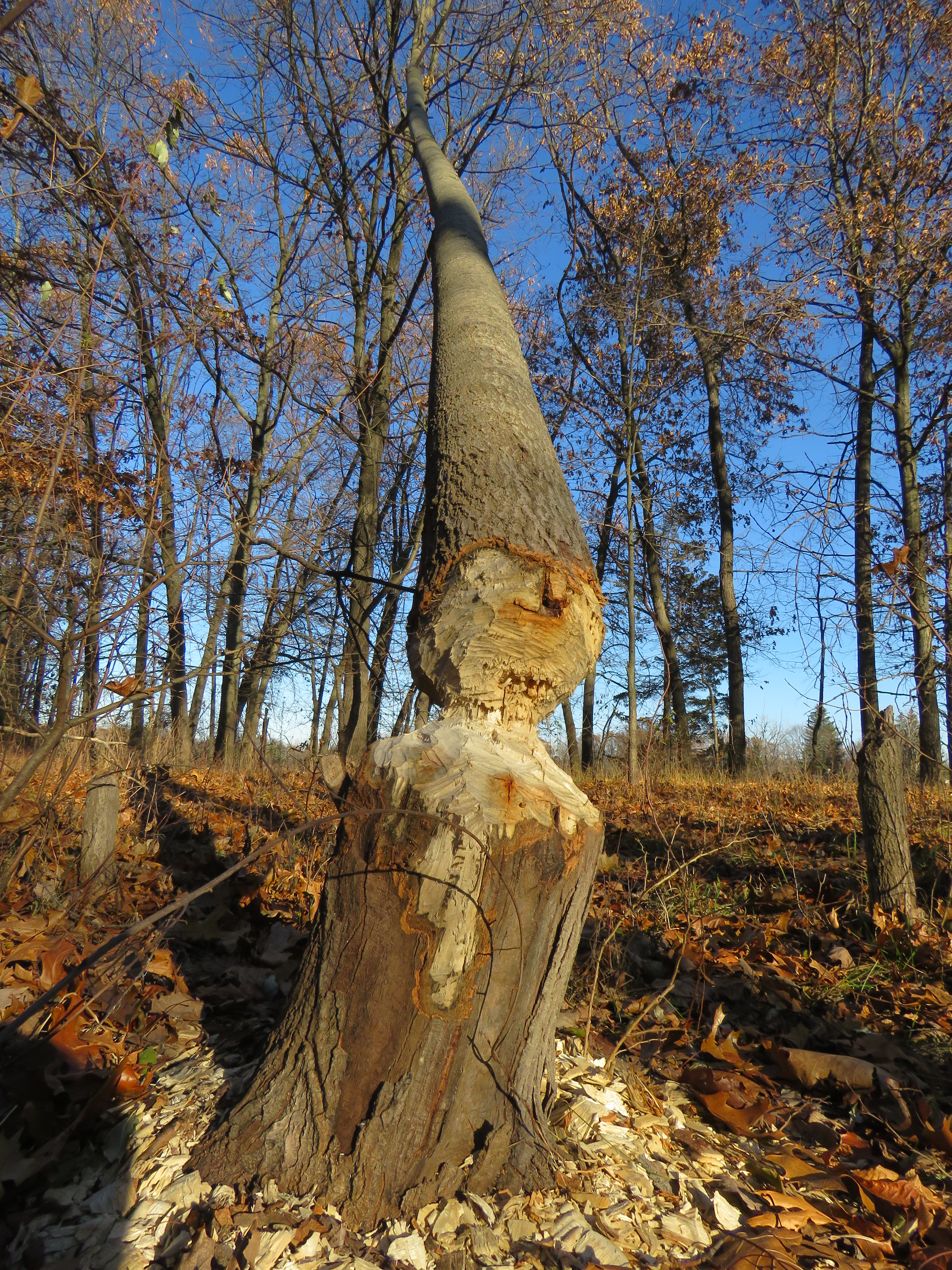 Nobody disputes the obvious: Beavers are the best dam builders and skilled outdoor engineers in the county. Beaver do not have computer simulations and math formulas to plan out and create long-lasting dams, but for them it’s almost always, “mission accomplished”. The function of the dam is to raise the water level sufficiently to protect their lodge from land based predators and make it easier to reach their food supply without travelling overland. The dams alter the habitat to suit the beaver’s needs, a skill set that humans try to mimic but often less successfully. When the water level is not high enough they may even construct a canal to allow water flow to reach trees and make it easier to drag limbs back to the pond. 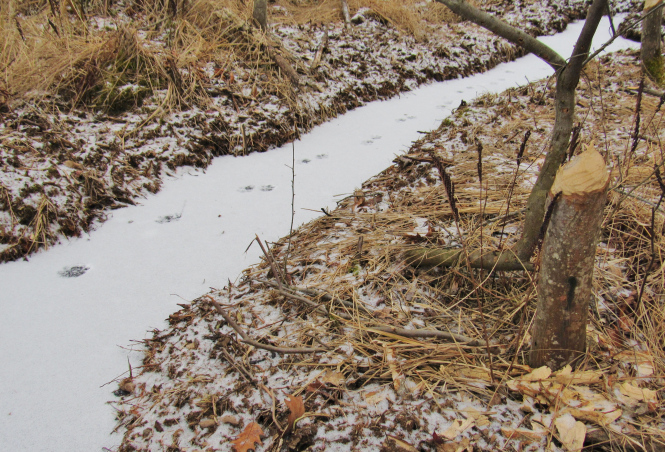 Coyote tracks on top of a canal dug by beavers

Beavers In Our History

Northern Oakland County has been a home to beavers for decades and their range is expanding. What is lesser known is the role beavers played in the history of greater Detroit. This Michigan National Public Radio audio from John Hartig of the U.S. Fish and Wildlife Service shares that history and the story of their return after a 150-year absence to the Detroit and Rouge Rivers. 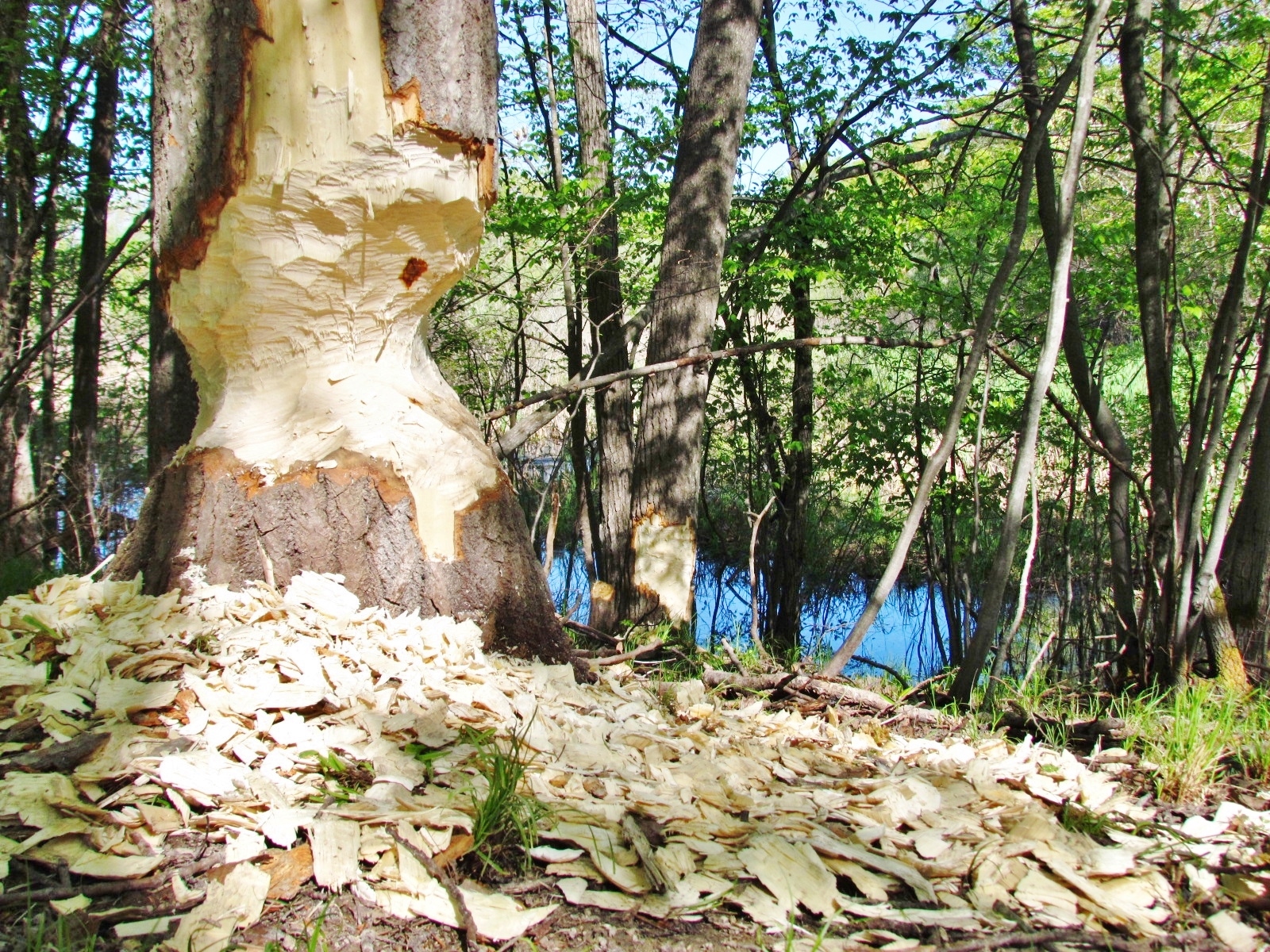 The sign of a beaver in Rose Oaks County Park

Muskrats create lodges of cattails and sedges in shallow waters, and like beavers, they also have an underwater entrance. Muskrats are sometimes seen in the waning days of autumn climbing up the outside of their lodge to pack mud on the outside. Did they learn this trick from watching beavers? Perhaps, for at times muskrats will enter a beaver lodge, and their habitats often overlap. A muskrat lodge is much smaller and never as strong or as long-lasting as the lodges created by beavers. A muskrat lodge would only support the weight of a nesting goose, while a winter-hardened beaver lodge easily supports the weight of a coyote, or intruding human. Muskrats do not create underwater food caches of branches, but they do construct feeding shelters that are called push-ups. The name push-up is descriptive. When the ice is still very thin, the muskrats push plant materials up through holes in the ice, thus the name push-up. The plant material of the push-up creates a hidden platform on the ice where the muskrat can rest and feed during its underwater winter forays for more emergent vegetation. When enough snow falls, the push-up is insulated and the hole will usually stay open. Occasionally a muskrat will take a risk and scurry across new ice making them extremely vulnerable to Red-tailed hawks and other predators on the wilder side of Oakland County. 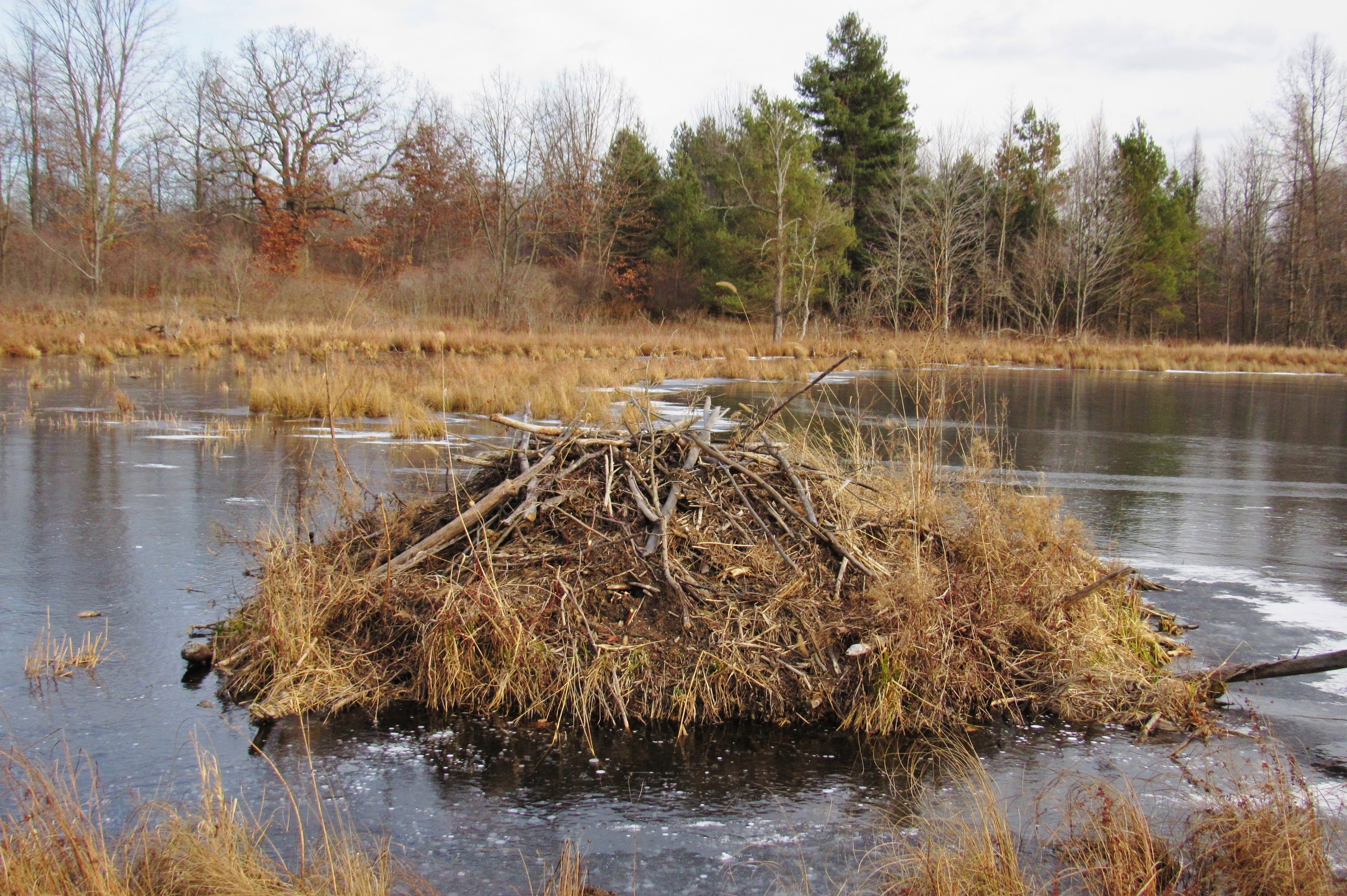