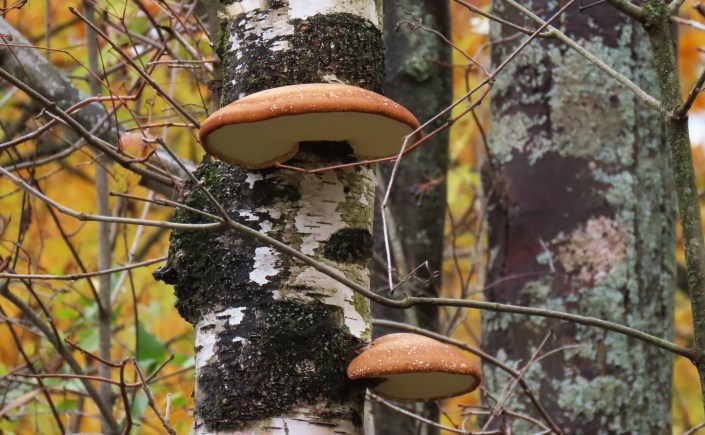 October has been a golden month; a time for hiking, cider making, leaf peeping, and endless adventure within Oakland County and beyond. I will miss those days that were punctuated by earlier sunsets, later sunrises, and clear, star-studded night skies. Mother Nature teased us a few times with snowflakes, hail pellets, and strong wind gusts, but sunny days and temperatures that climbed into the seventies in this final week dominated the month before rains came near the end. That rain fueled a final emergence of fantastic forest fungi, including shelf fungus that grows on trees.

I knew that autumn was fading during the golden days of October when the Addison Oaks Trail Riders had their annual camp and ride event at Addison Oaks County Park, and cascades of leaves twirled downwards. Although I do not ride, I always enjoy spending time with the equestrians in that beautiful county park, one of 14 parks managed by Oakland County Parks and Recreation.

Sometimes overlooked in the kaleidoscope of colors, even by those that follow nature’s way, is a shrub-like tree with spidery looking yellow flowers with the unusual name of witch hazel. Unlike most trees and shrubs, witch hazel blooms in late October and the blossoms remain well into November. Why the name witch hazel? Early settlers believed that if they carried a forked, Y-shaped witch hazel branch loosely in their hands, and the tip of the branch suddenly pointed downwards, it signaled a hidden source of water. That practice became known as “water-witching” and led to the common name we use today, witch hazel.

Tamarack trees are just starting their color change. Tamarack is a coniferous (cone–bearing) tree that thrives in moist areas and is rather common in the northern reaches of our county. Unlike our pines, spruce and hemlocks that keep their needles, tamarack needles begin their transformation from green to “smoky gold’ in the waning days of October. Windy days of November will create a cascade of their falling needles.

Painted turtles, sometimes coated in duckweed, lined up on logs to bask in the sun during the final weeks of October. Sometimes they pose rather nicely for a photo as they align themselves to absorb as much heat as they can. The ultraviolet light from the sun also produces vitamin D, which helps in the growth of healthy shells. Looking for turtle trivia knowledge? Then here’s a fact for you I just discovered: male painted turtles have longer front claws then the females.

Flocks of geese still remain in our county, and many overwinter here, quite successfully grazing on exposed grasses. Last weekend, while adventuring well north of the county, we noticed geese that were feeding with their bottoms up, a behavior I have not witnessed before. A bit of research revealed they were feasting on under water aquatic vegetation, a behavior that increases in late October.

Deer are more restless now as they enter the breeding season, known as the rut. Hardly a day goes by that I don’t encounter deer on the move, or sometimes casually walking by my house. Snakes also take advantage of these final golden days and bask in sunlight on trails before they seek sites for winter slumber.

Yellow jackets are on their final feeding frenzy, much to the chagrin of those partaking in late season picnics or visiting our cider mills. All yellow jackets will most likely perish in another week or two, when temperatures stay below 45 degrees for an extended period of time. The exception are their fertilized queens that hibernate under a decaying log or inside old tree stumps. As someone who keeps honeybees, I will empathize that honeybees stay active all winter insider their hives, feeding on pollen and the nectar they gathered and transformed into honey.

Squirrels are in hyperactivity mode as they gather nuts for the winter. There is a red squirrel that seems interested in finding access to my porch and at times looks down at me from a branch and vocally scolds me for my intrusions.

Wild turkeys are on the move now too. They are feasting on fallen nuts and searching for grubs under leaves. I paused on a trail at Stony Creek Metropark earlier this week to watch the tail end of this flock casually trot by.

I look to the seed dispersal of milkweed pods as the harbinger of the closing days of October. Milkweed pods felt soft and were pale green earlier in the month, but now as they turn brown and slowly open, they release hundreds of seeds attached to silky white floss that functions like a parachute. Gusts of wind carry them on their journeys to new locations, assuring their cycle continues.

During October I found every excuse I could muster to be outside, to the point that my neighbor thought I was out of town. “Haven’t seen you in awhile, Jonathan.” I’m here, waiting for the pumpkin frosting days of November and new explorations of nature’s way to begin on the wilder side of Oakland County.