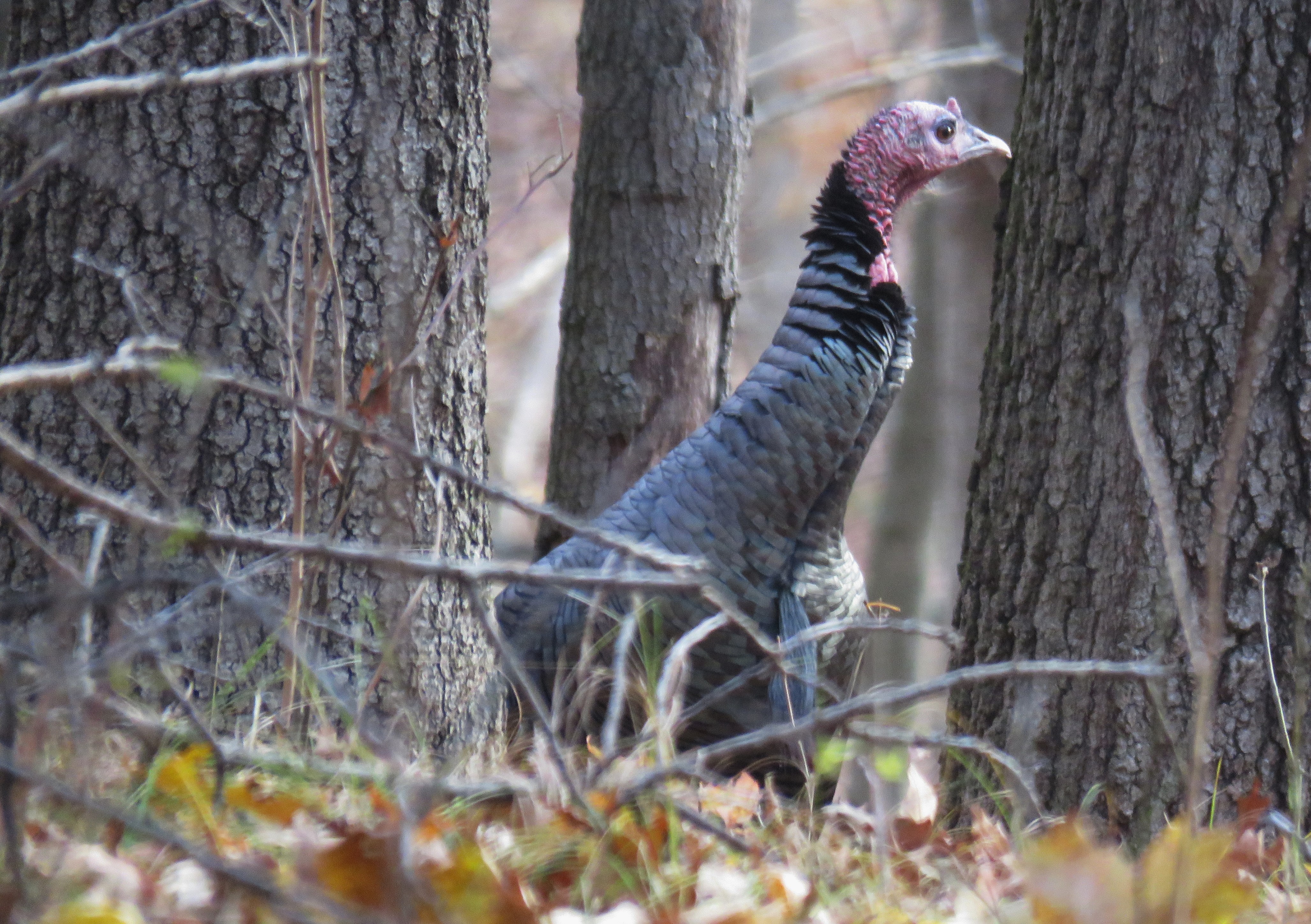 No one seems to think about turkeys very much until the turkey’s internal temperature soars to 180 degrees Fahrenheit and it’s surrounded by sweet potatoes, cranberry sauce, cooked greens and a pumpkin pie. Invite me to your Thanksgiving table and I won’t ask about the wishbone; I will try to engage the gathering in a lively conversation of snoods, wattles, caruncles, dewlaps, spurs and beards.

When the turkey is being sliced, I might then mumble, “If this had been a wild turkey, it would have been able to fly away and hide in the tree tops.” That truthful statement would shatter the myth that turkeys are flightless, and bring an opening to share more tidbits of nature’s way on the natural and unnatural history of the wild turkeys in our midst. Then again, I might be asked to leave the table and save my nature ramblings for another day. We’ll make today that day. 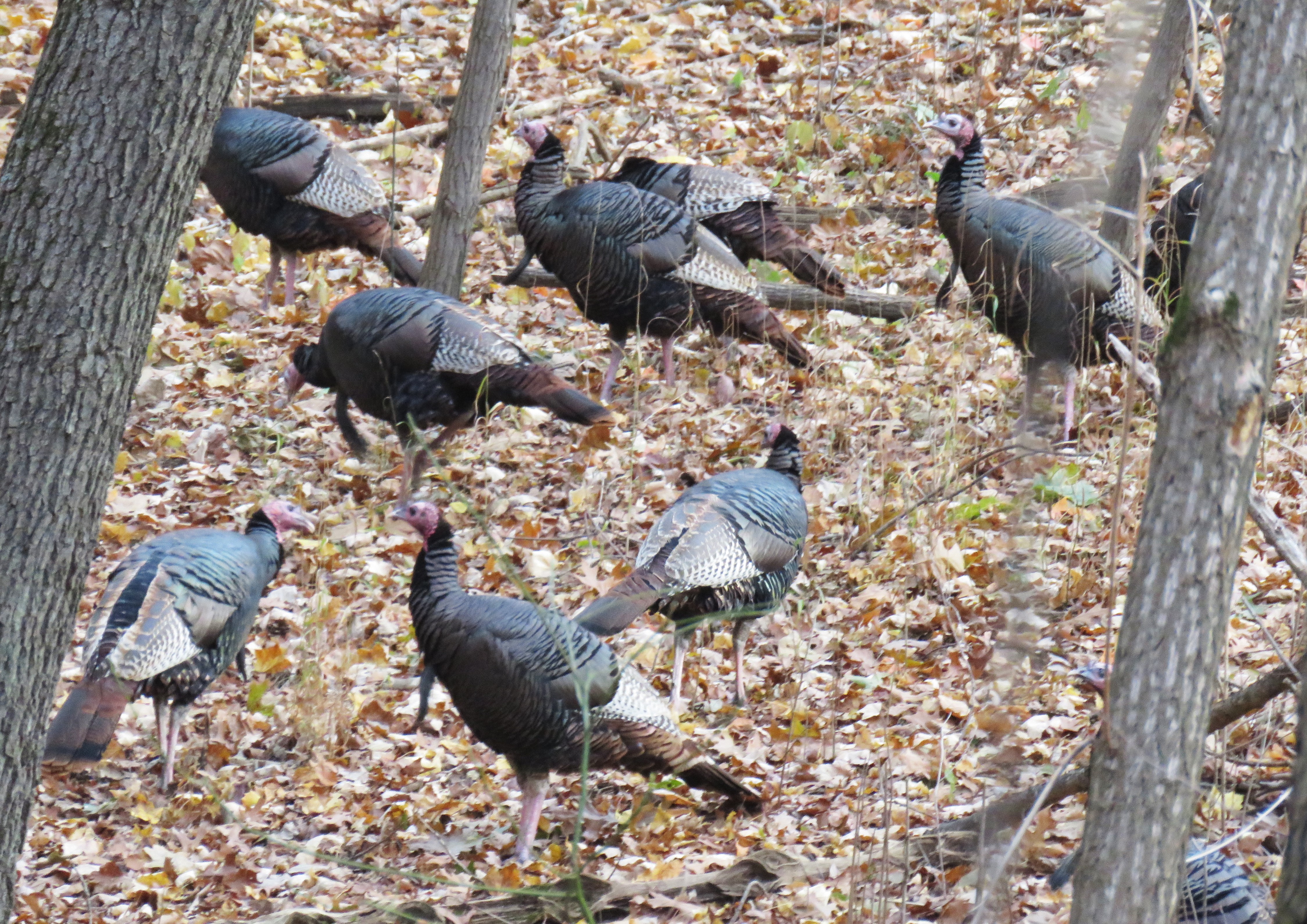 I’m not the only person that stirs turkey tale controversy, and has a love for Meleagris gallopavo, our native wild turkey. According to Library of Congress records, Benjamin Franklin stated in 1776 that:

“For my own part, I wish the bald eagle had not been chosen as the representative of our country; he is a bird of bad moral character; he does not get his living honestly…like those among men who live by sharping and robbing…he is generally poor, and often very lousy. Besides, he is a rank coward; the little king-bird, not bigger than a sparrow, attacks him boldly and drives him out of the district…For in truth, the turkey is in comparison a much more respectable bird, and withal a true original native of America. Eagles have been found in all countries, but the turkey was peculiar to ours…” 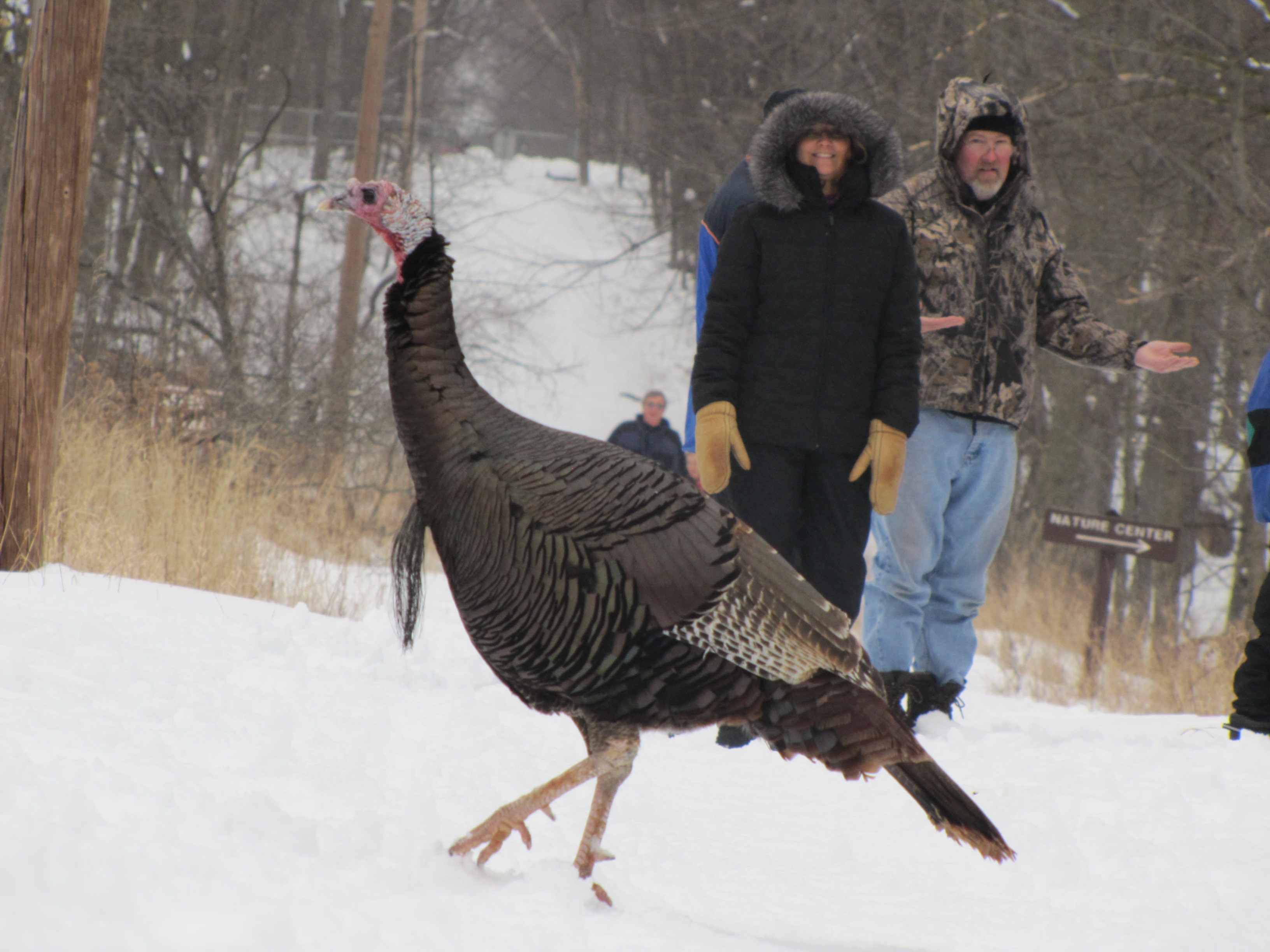 The National Wild Turkey Federation loves turkeys too – as a tasty species – and works successfully on habitat restoration. Here’s what they say about the wild turkey as a meal: “Packed with pure protein while remaining low in cholesterol and bad fats, wild turkey meat is as lean and green as it gets. No steroids, antibiotics or other man-made chemicals spoil this truly organic, fair-chase meat, as wild turkeys forage on only natural foods, such as acorns, grass seeds, insects and other foods found in their woodland habitat.” They are correct in their assessment. Although I am not a hunter, I thoroughly enjoyed my share of this wild turkey (see images below) from northern Oakland County. I was well aware that it was a healthier alternative as compared to its farm-raised, grain and filler fed, pale kin that has about as much chance as flying up into the trees to roost as a pumpkin pie does.

Many people believe that no turkey can fly, which is far from the truth. The wild turkeys that enrich the woods of our county with their beautiful colors, unique behavior and seasonal gobbles are excellent flyers and can reach 55 miles per hour in short bursts of speed. They do not, however, use flight as a primary means of travel, except for crossing rivers and obstacles such as roadways like I-75. The primary function of their flight is to reach tree tops and nightly roosting spots free from predators, especially the eastern coyote: a connoisseur of turkey, not just on Thanksgiving, but any day of the year.

Although a very large bird, with some weighing as much as 20 pounds, when wild turkeys are motionless their color patterns help them blend with the environment. Their iridescent feathers are tinged with shades of green, copper, red and gold and the entire bird appears bronze. Every once in a while, someone sees a turkey that appears to be streaked with grayish-white coloring. I had that pleasure last summer when I encountered one that wandered the edge of my woods on what appeared to be a grasshopper hunt. I snapped a few images of that beauty before it vanished and shared them with the local office of the Michigan Department of Natural Resources. Here’s what they wrote:

Are you looking for a way to quiz, entertain or confuse your thanksgiving guests with turkey facts to keep table talk conversation lively? Beyond sharing the existence of the smokey-gray turkeys that stalk our woodlands, I have five words to share with you, starting with the word “snood.”

A snood is that strange-looking “thing,” perhaps more properly called “a mysterious fleshy appendage” that dangles over the beak. There is a lot of debate about its function, but on males it grows four or five inches long. During breeding season it elongates and turns bright red and has streaks of icy blue. The assumption is that the male uses it to attract females, and gobble a message to her, “Hey, check me out!”

Caruncles are the bulbous looking bumps that grow on the neck and head of both genders. The male caruncles are more pronounced and like the snood can quickly turn bright red when the turkey is excited, aggressive or just strutting about during breeding season.

Wattles are very noticeable fleshy appendages that dangle, wiggle and wobble from the neck of turkeys. They too become red and engorged with blood when it’s courtship time. Some biologist think that the presence of a noticeable wattle will intimidate other Tom (male) turkeys. Others proclaim it’s attractive jewelry to lure the not so easily impressed hens (female).

The dewlap is another fold of loose skin, this one connects the neck to the head just under the beak and is more prominent on the adult Toms. The female turkeys have them too, but as you probably guessed by now, the dewlap turns as red as cranberry sauce when the male is courting or agitated.

When I hear the word spurs, I think of old westerns, but these spurs are different. As male turkeys become mature they begin developing slightly curved talons – some call them claws – officially known as “keratinized appendages”. One grows on the back of each leg. They are known as spurs and continue to grow and slowly lengthen throughout the turkey’s life. Record size is just over two inches long. According to my turkey hunting friends they are used in combat as they “kick box” for dominance over a flock of hens.

Unregulated hunting and habitat destruction once plunged the wild turkey population down to perhaps just 30,000 birds across the country back in the 1930s. Conservation efforts, including the release of pen-raised birds back to the wilds, has restored the population to about 7 million today and they thrive in various habitats, including much of Oakland County. Not surprisingly, many of our more urbanized, slightly “upscale” local wild turkeys are less wild than one may think. They quickly locate bird feeders and are exceptionally bold as they adapt to our ways. California’s Keep Me Wild initiative has some great suggestions for keeping wild turkeys wild and out of yards. Here are four of them: 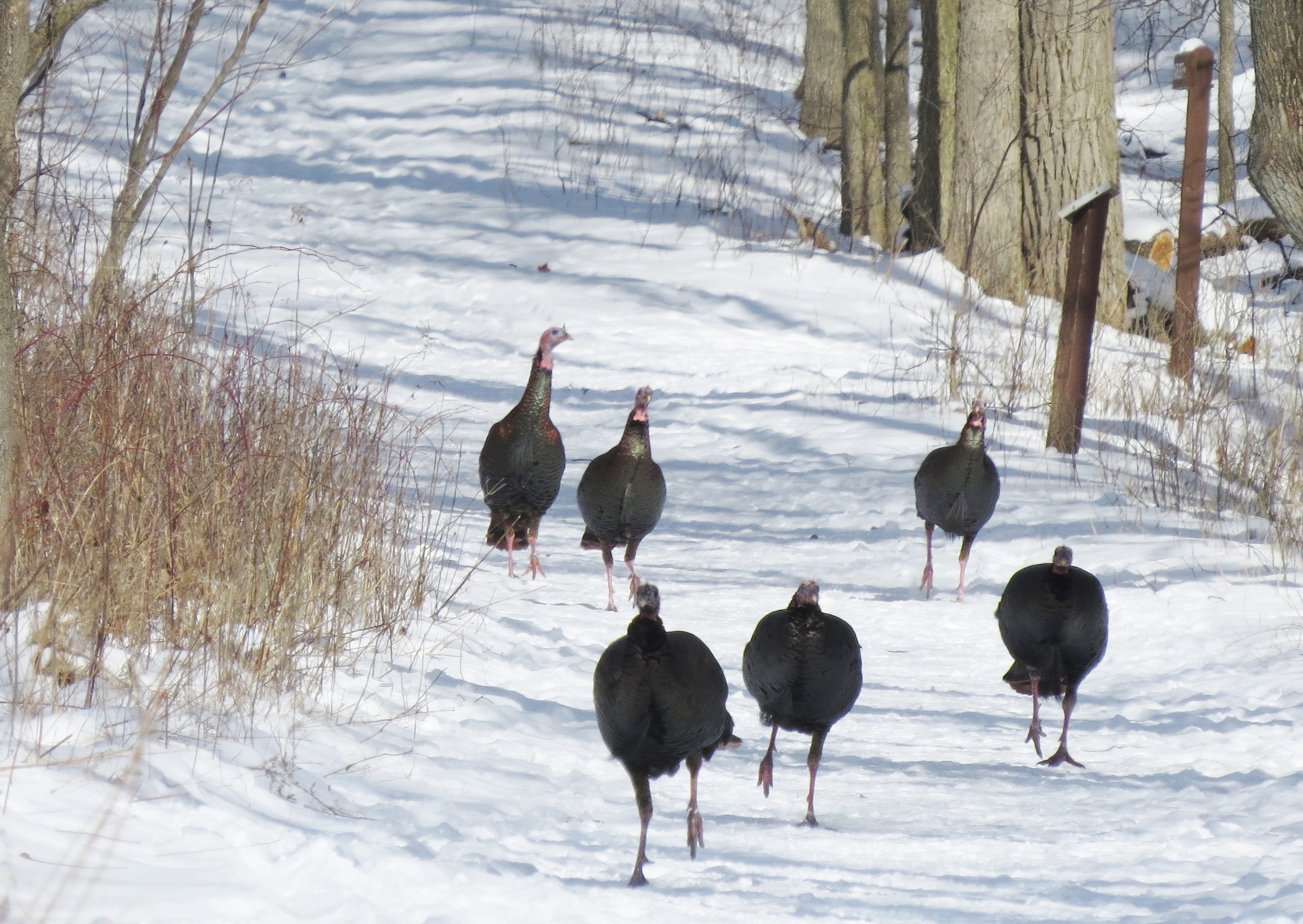 Thanksgiving week is a perfect week to wander the woodlands and look for wild turkeys. In addition to being present in all our Michigan State Recreation Areas, Seven Lakes State Park and the parklands managed by Huron-Clinton Metroparks and Oakland County Parks, turkeys frequently trot along the Paint Creek Trail, Polly Ann Trail and the Clinton River Trail. Last week I walked silently in splendid solitude at Independence Oaks County Park and had the pleasure of watching a flock moving slowly through the woods searching for their pre-Thanksgiving feast of grubs, bugs, and fallen acorns. Here’s a look at the video. Happy Thanksgiving to all from the Wilder Side of Oakland County.

3 thoughts on “Turkey Tales and Tidbits from the Wilder Side”