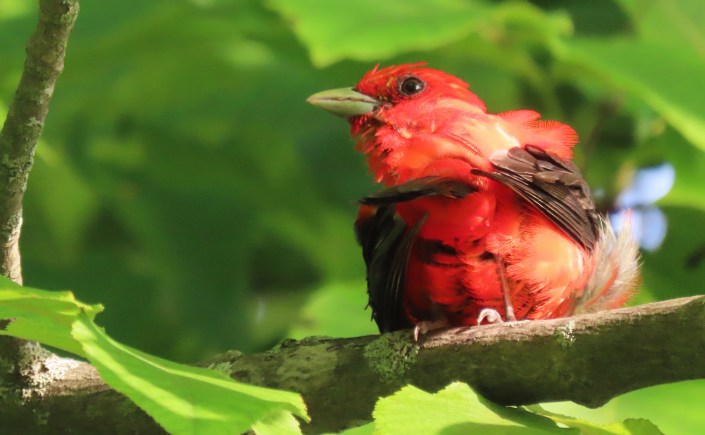 Despite the heat waves that swept across Oakland County, it’s hard not to think about the chillier nights that will soon turn into even chillier days. Early August was sizzling hot with the temperature soaring into the upper 90s. Some of us hunkered down in air-conditioned worlds. But for those of us that wandered the woods, meadows, and lakeshores of our county, the world of nature’s way was very much alive. What was there to see? Here’s just a small sampling from a few short treks on the wilder side of Oakland County.

A stunningly gorgeous Scarlet Tanager captivated my attention as I hiked the shoreline of Crooked Lake at Independence Oaks County Park. When I first noticed a brilliant flash of red flitting about the tree canopy, I had no idea what species of bird I was watching. I knew it was not a Cardinal, which has a much more subdued shade of red. Suddenly, it flew into clear view and its jet black tail feathers and wings confirmed it was a male Scarlet Tanager—the first one I have ever photographed—and in perfect lighting at that.

Great Blue Herons have been actively hunting for fish and frogs in the shallows of our county’s wetlands. Although I often see a few feeding at a weedy pond near my house, this sighting was so very different. I witnessed what appeared to be in a dramatic dispute over a favored fishing location. After about 30 seconds of beak jabbing at each other, one flew off and then the other resumed its tried and true three step technique to acquire a meal, but now in the accompaniment of a Great Egret. Step 1: Freeze in place. Step 2: Extend neck slowly. Step 3: Plunge forward and grab dinner.

These twin fawns are rapidly increasing in size but still have their camouflage spots. They make occasional appearances at the edge of my woods, sometimes alone, but often a doe is with them. I think they know far more about my wanderings and movements than I know about their ways, but I was lucky a few weeks ago. My camera was with me as I wandered about and suddenly they appeared almost right in front of me. I went unnoticed long enough to capture some images. Perhaps I will see them again tomorrow.

Garter snakes are slithering about and basking in sunlight. They are very active now hunting grasshoppers, leopard frogs, and even the occasional fledgling that falls out of a nest. Have you ever seen garter snakes around your garden? If so, that is excellent news. They should be considered one of the best friends a gardener can have. They certainly won’t bother you, and they eat many common garden pests including grubs, slugs, grasshoppers, beetles, and even baby rodents. Although they are typically ground-dwellers, they will occasionally slither up shrubs to find a meal, or escape a predator.

Juvenile raccoons are striking out on their own. Raccoons are omnivores and consume a great variety of food including berries, fruit, crustaceans, worms, fish, and eggs. Shallow wetlands offer endless opportunity to hunt for frogs and crayfish. They are also skilled at raiding trash cans for food, and sometimes pay visits to unattended picnic tables. Their natural curiosity is clearly displayed as this one demonstrated as it watched me wandering beneath its tree. As to why it was on the tree branch in daylight—my best guess is that shaded location provides cool breezes on very hot days.

I’ve come to recognize a pair of Sandhill Cranes that frequent the shoreline of Crooked Lake at Independence Oaks County Park. They are highly opportunist feeders and the living is easy for them there with the abundance of insects, grains, grasses, and even small animals such as meadow voles to feast upon. I sometimes hear them near the boathouse before I see them as they draw attention to themselves with their loud, rattling bugle calls.

After not seeing even a single monarch butterfly for much of the summer, I now see them almost daily.  On almost every sunny afternoon for the past week they have visited my meadow—some alight on an aptly named milkweed species known as butterfly milkweed. I’m happy about that, and it certainly bodes well for their migratory journey and the species survival, since monarchs lay their eggs on milkweed. While feeding on the plant’s nectar, they also pollinate the plant, keeping the cycle of nature’s way going—an act that bodes well for the wilder side of Oakland County.