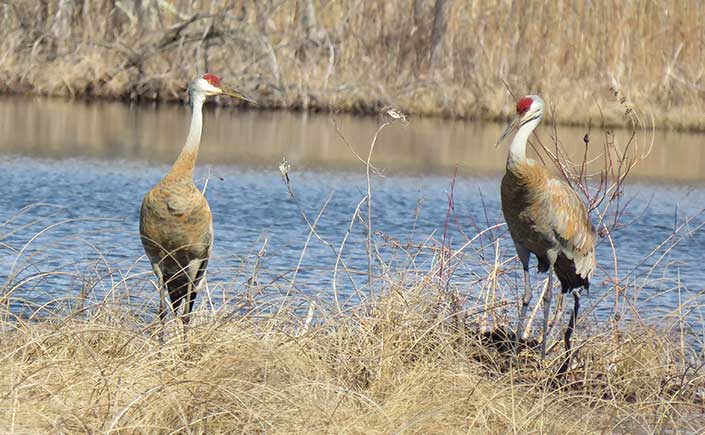 Sandhill Cranes signaled me it was time to ignore the weather naysayers, for after a hard-fought weeklong contest, spring has won the annual duel with old man winter. Signs of spring are everywhere if one just takes the time to walk a trail, stroll through a woodland, embrace a swamp or just go outside and look about.

Today I share fourteen confirmations that spring is here to stay, starting with Sandhill Cranes. These red-crested beauties have returned to the wet meadows, fields and marshlands of Oakland County and often enliven the mornings with their magnificent rolling, trumpeting sound. Hikers who walk slowly and silently along wetland embracing trails may even be able to witness their magnificent courtship dances that proclaim spring is here to stay, a wonder of nature I have observed at Rose Oaks County Park, Addison Oaks County Park and Indian Springs Metropark.

Fire has always been part of the environment and as one of the most important natural agents of change, fire plays a vital role in maintaining certain ecosystems. Prescribed fire is a planned fire used to meet management objectives. The art and science of prescribed fire has taken hold in Oakland County after decades of fire exclusion in our fire-evolved landscape. An ecosystem such as a prairie, meadow or even a woodland needs periodic fire to stay healthy, just as nature intended. The right prescribed fire, at the right place and at the right time, improves habitat for threatened and endangered species, restores our native prairies, recycles nutrients back to the soil, and removes invasive species. They are sometimes even planned to reduce hazardous fuels, which will then protect adjacent human communities from extreme fires.

Skunk Cabbage is one of the very first flowering plants to emerge in spring. This swamp loving flower, recognized in early spring by a mottled maroon hood-like leaf called a spathe that has pushed up through snow and the ice of swamps, appears way before other more recognizable woodland wildflowers. Skunk cabbage is a truly remarkable plant because it actually produces heat as it grows through a process known as thermogenesis. Look for it as you hike near swampy areas in woodlands and along the fertile banks of creeks. 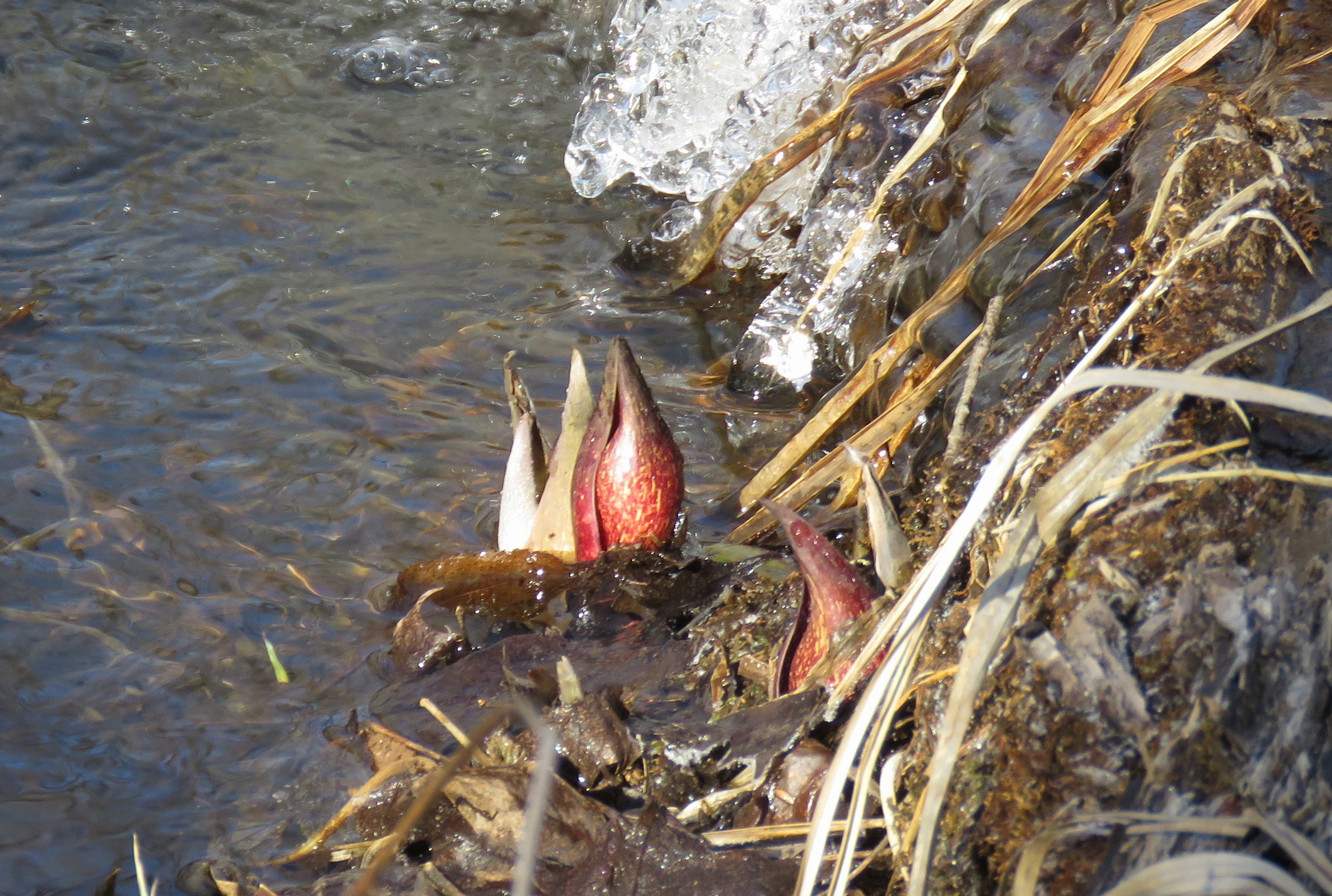 Eastern Garter Snakes spent the winter months hibernating inside old animal burrows, or under boulders and large decaying logs. As soon as the ground thawed, they returned to their topside world and started to slither about in their pursuit of earthworms, insects, millipedes, early emerging frogs, and most anything else they can capture and swallow. On early spring days, they sometimes seemingly survey their landscape from the sunny southern slopes of woodlands, and just like humans, bask in the warmth. 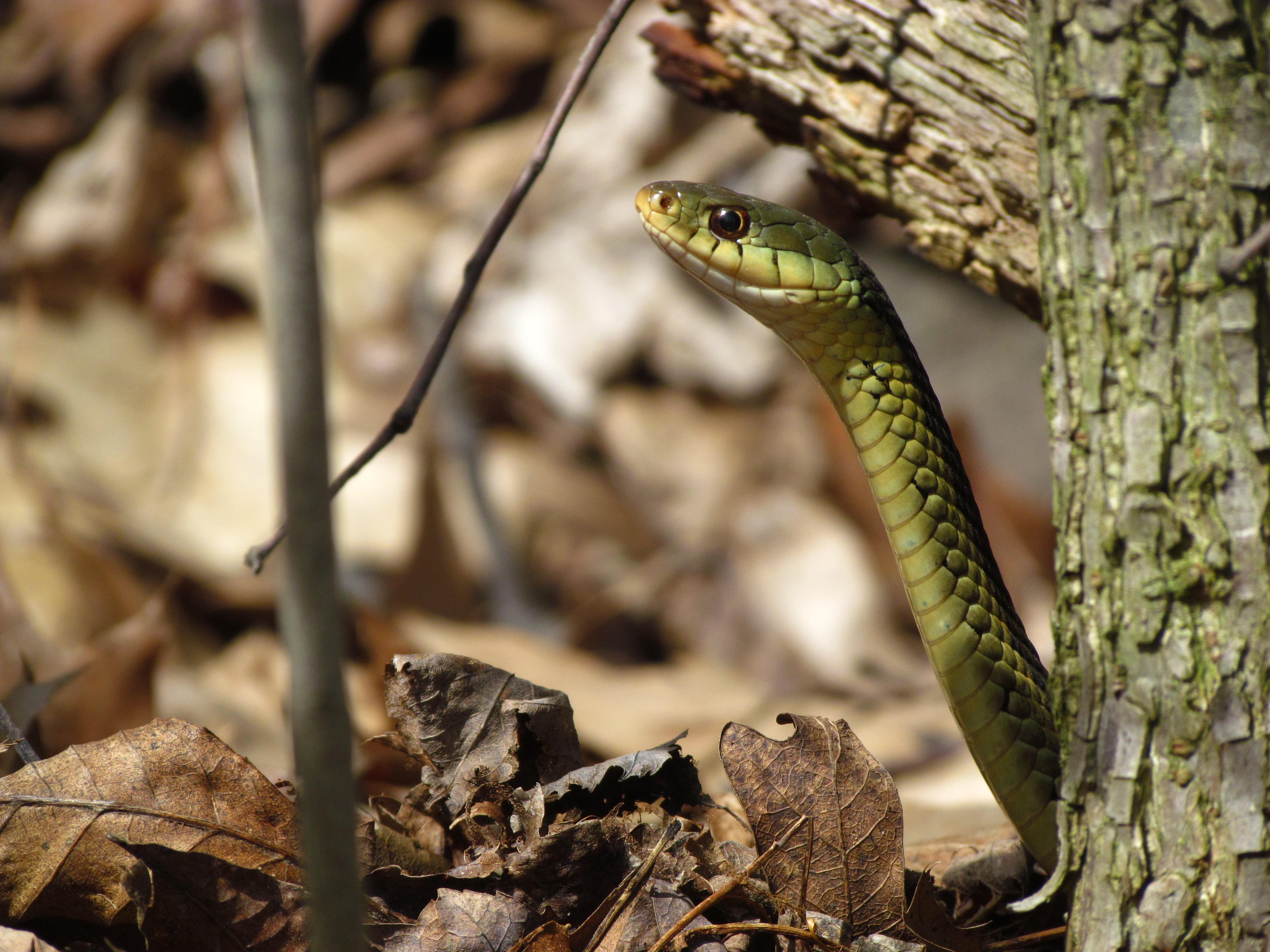 Turkey Vultures have returned and plenty of road-kill awaits them. Look for them soaring above urban and rural landscapes of Oakland County in their teetering flight pattern with very few wing beats as they sniff for carrion. On cold, but sunny spring mornings, they may perch on a ledge of an office building in Troy or Southfield with wings spread wide to catch the sun’s rays, or bask in the relative warmth on a barn roof in the northern fringes of our county. 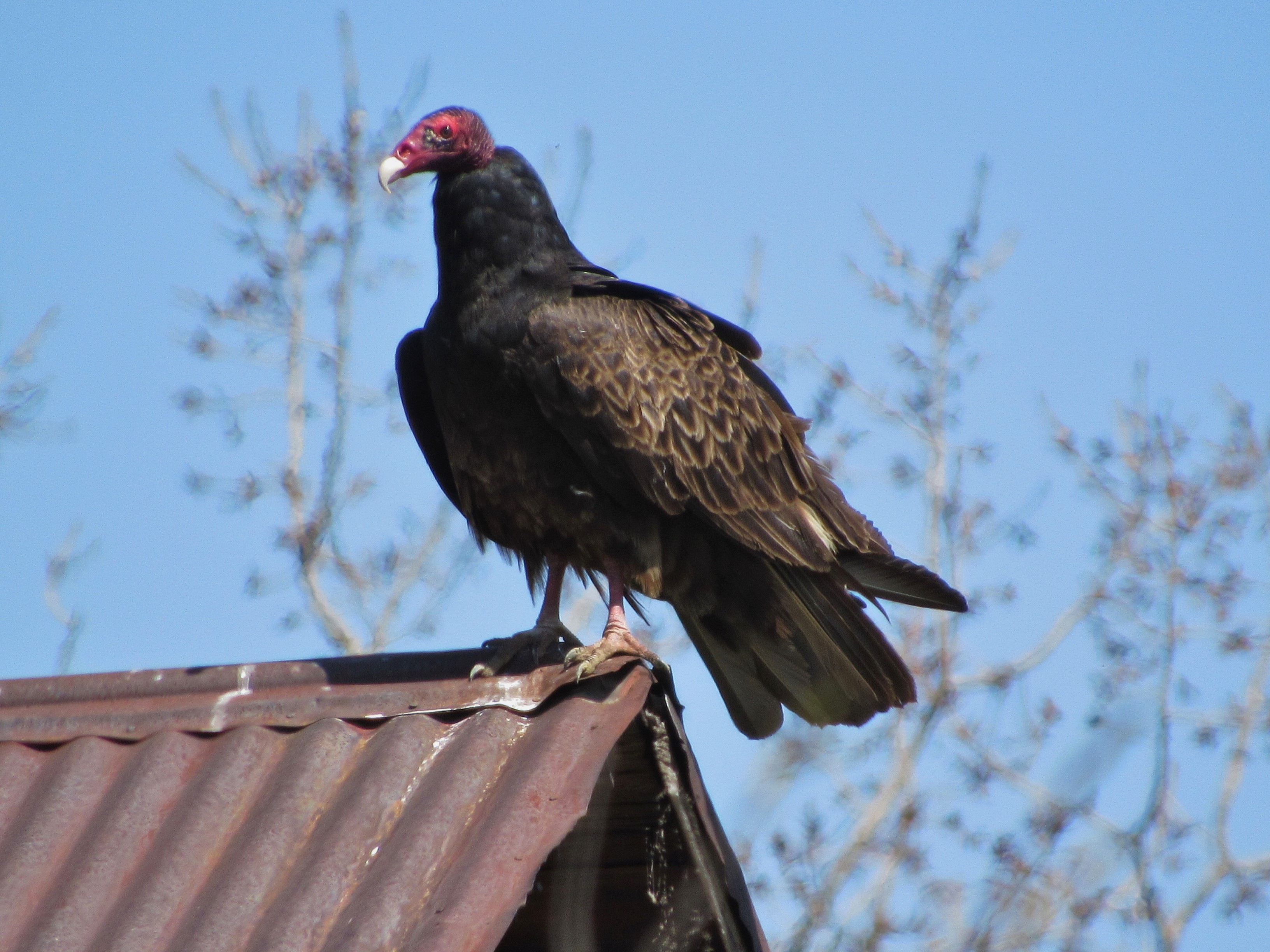 Woolly Bear Caterpillars have emerged from their hibernating spots under the loose bark of trees, inside the cavities of decaying logs or beneath old boards. They now crawl about at the super slow speed of a woolly bear and in a few weeks will spin cocoons and then transform inside the cocoon into the Isabella tiger moth.

Eastern Bluebirds are actively searching for nesting sites wherever meadows and adjacent good habitat exists. Henry David Thoreau noted that the “bluebird carries the sky on his back”. I certainly agree with his observation and this is the fourth year in a row a pair has taken up residence in a rustic bird box on my split rail fence overlooking my yard that some may say is “too weedy”. I look at my front yard as wild and free, and a vibrant part of nature that will be rich with wildflowers and natural grasses and provide plenty of pesticide free insects to feed the hatchlings. 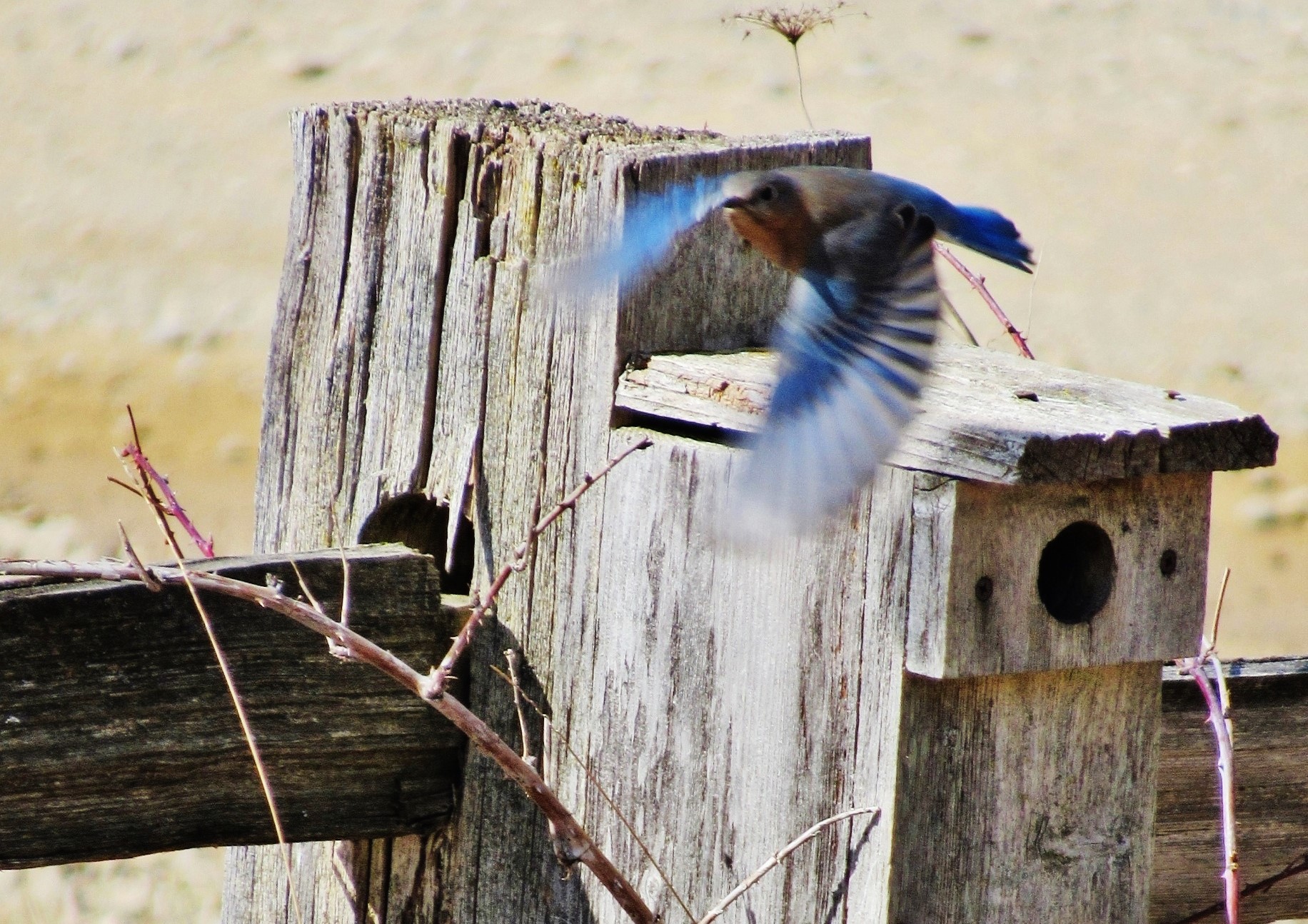 Canada Geese waddle slowly across the last thin ice of our marshland as they search for the best nesting sites hidden among cattails. Some suburban geese select sites near where golf courses meet woodlands, drawing attention of eastern coyotes that will visit easily accessible nest sites and feast on nutritious eggs. 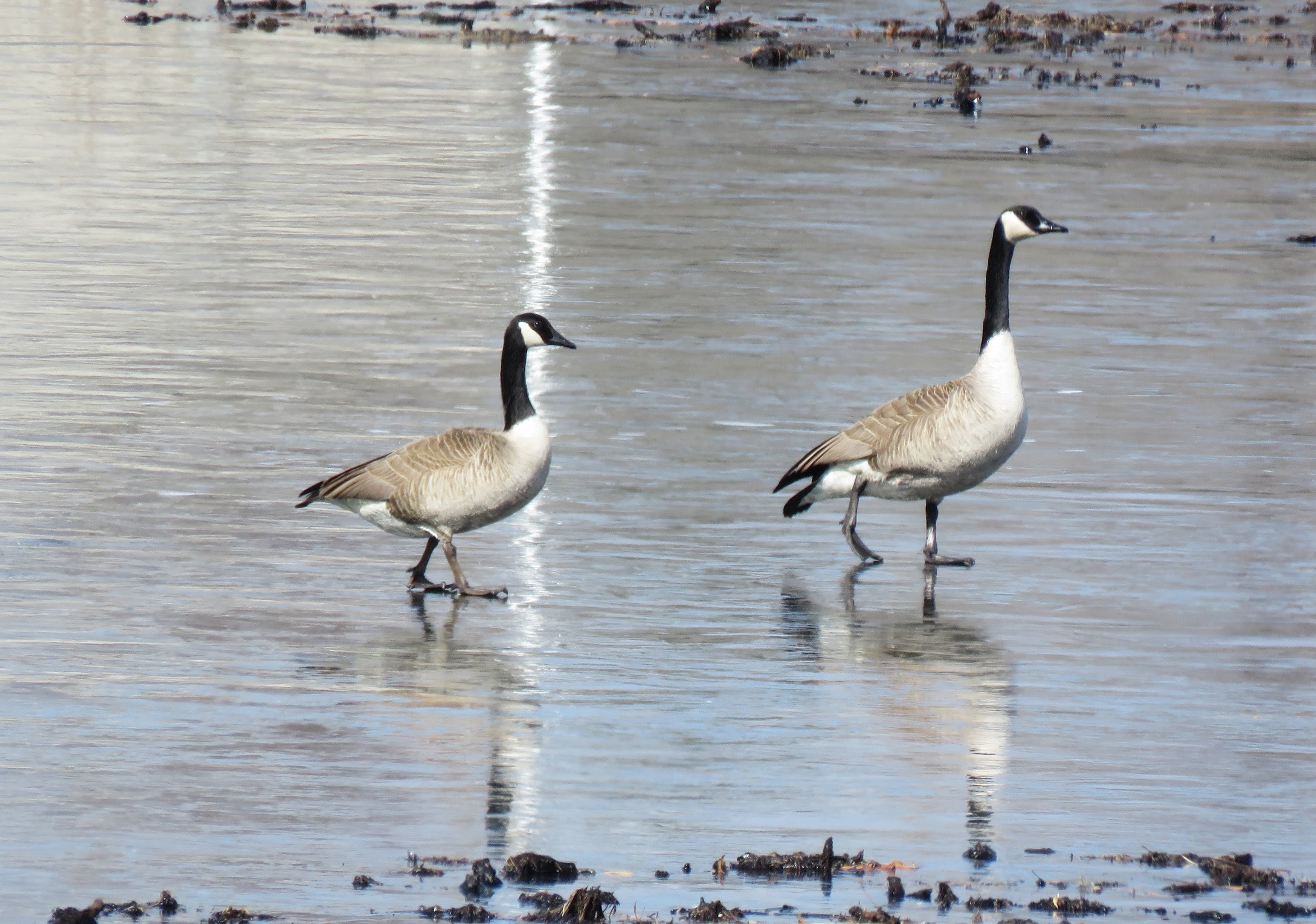 Chipmunks have cat-napped much of the winter and now have what could almost be called a “sleepy look” when they survey their early spring world from a trailside stump. But get too close and they are gone in flash back under a log or inside the hollow of tree. As soon as you wander on, they resume scurrying about the forest floor in true hyper speed chipmunk fashion. 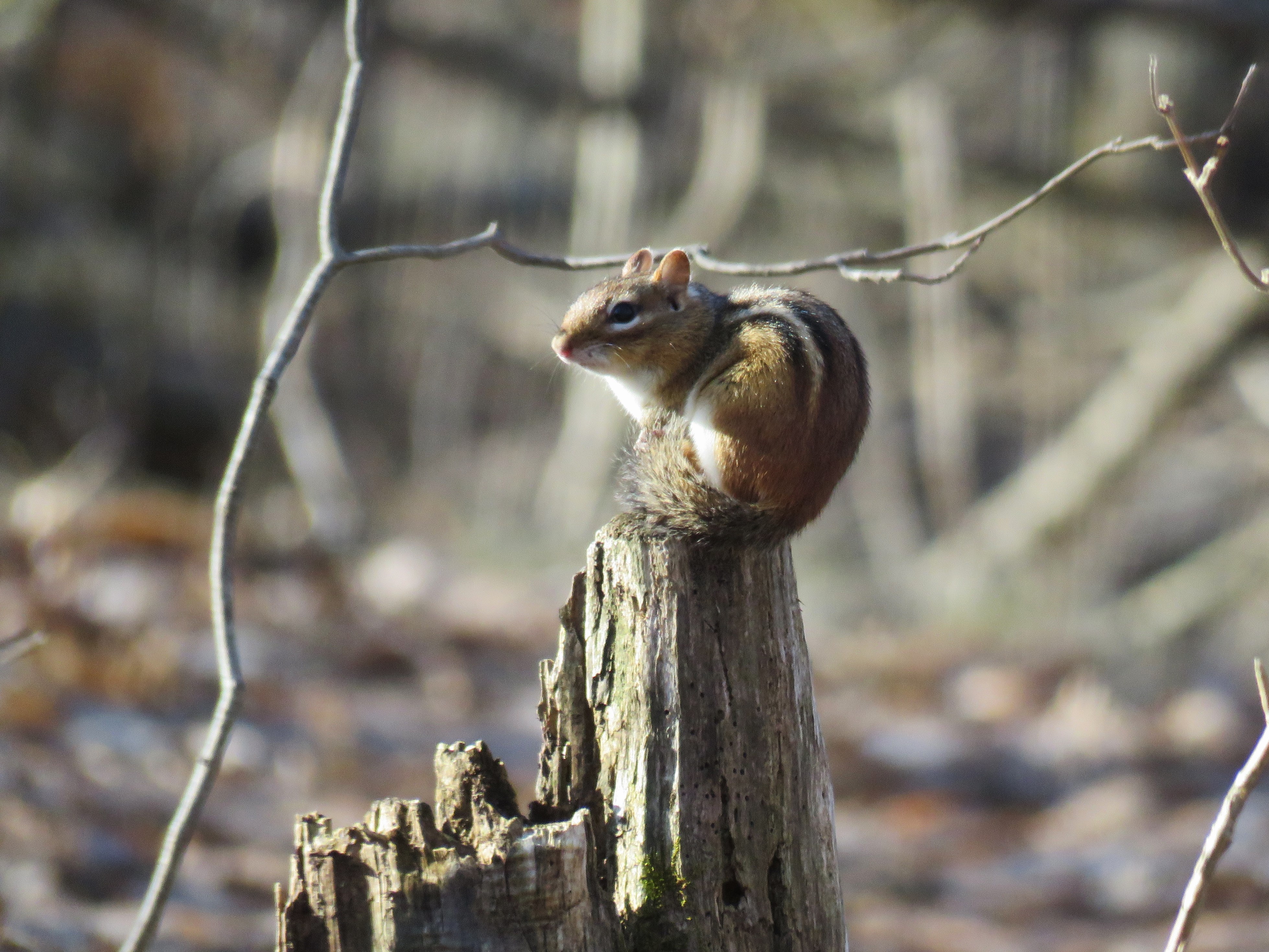 Wild Turkeys are up and about at sunrise. Walk almost any large woodland, parkland or State Recreation Area in our county and it’s hard to miss hearing the gobbling calls of the Toms (males) as they try to lure females their way. When it’s time for courtship they raise and spread their tail feathers, droop their wings, swell up their colorful face wattles and then strut about in a posture that clearly says, “Hey, look at me!” 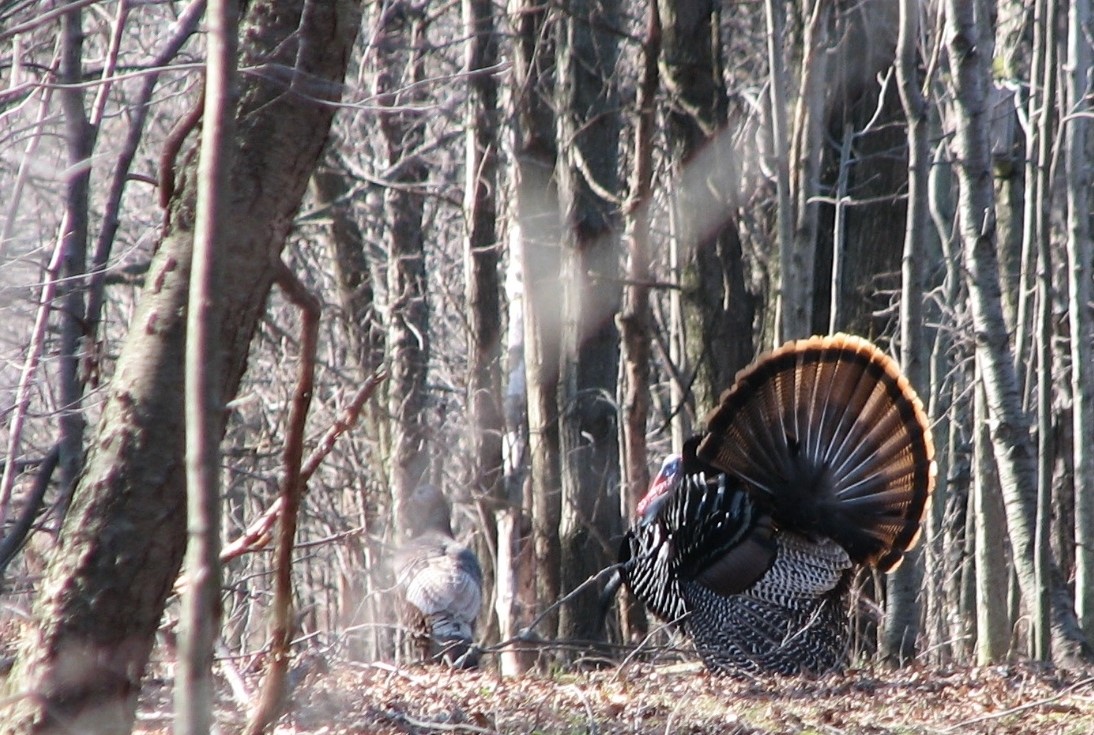 Vernal Ponds in our woodland ponds are almost free of ice and soon salamanders will emerge from under nearby logs and head down to the pond for their mating rituals, which to some observers appears to be a frenzy. Wait a week or two and the duck-like quacking sound of wood frogs will resonate from these critical woodland breeding ponds. 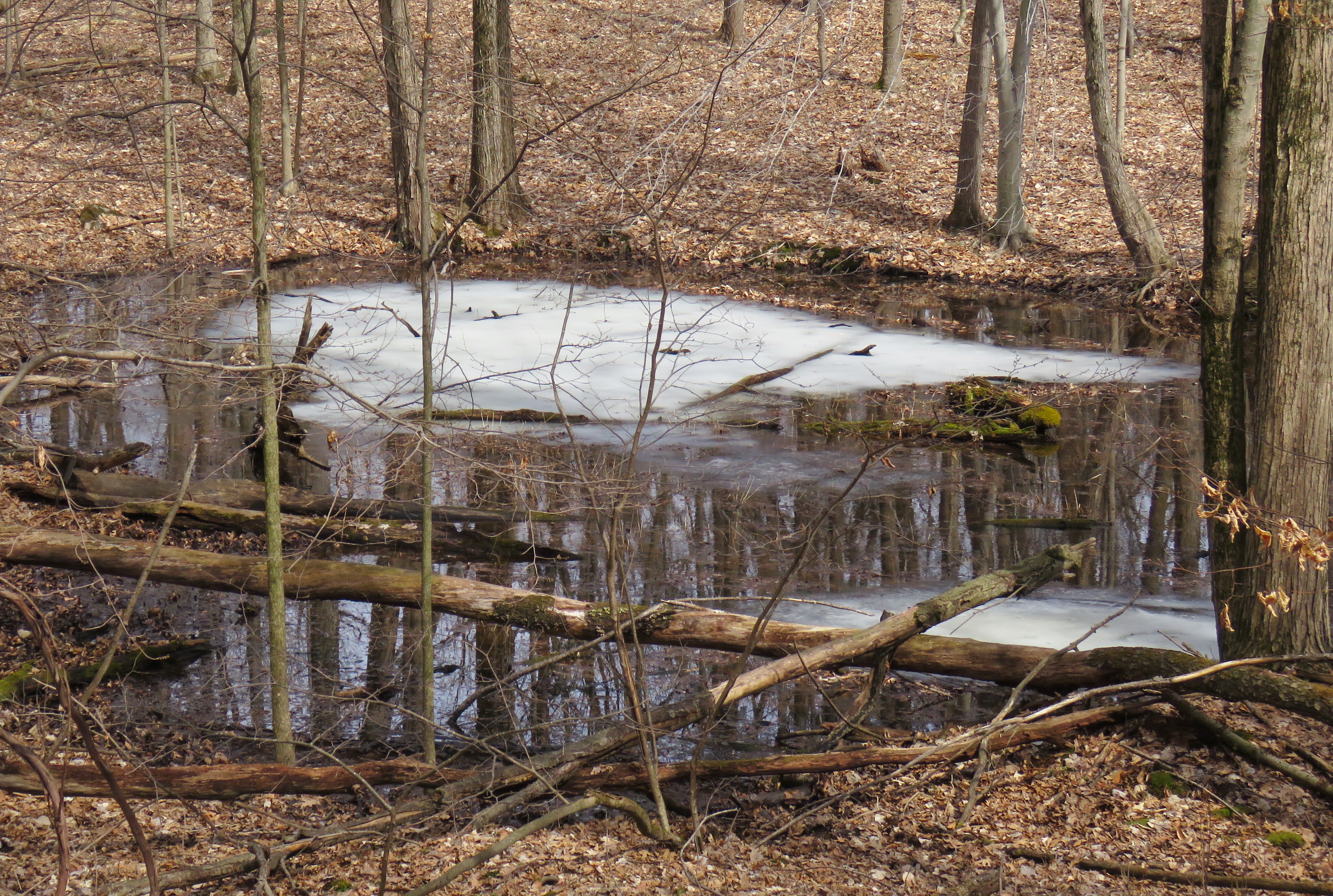 Red-Winged Blackbirds enliven the marshes of our county with their repetitive “conk-la-ree” song. The males are impossible to miss when they flash their red shoulder patches edged with yellow and do everything they can to state loudly and clearly, “This is MY territory!” As some joggers and runners discover, they may swoop at any passing intruder to protect their nesting site as this one did alongside a trail at Indian Springs Metropark. 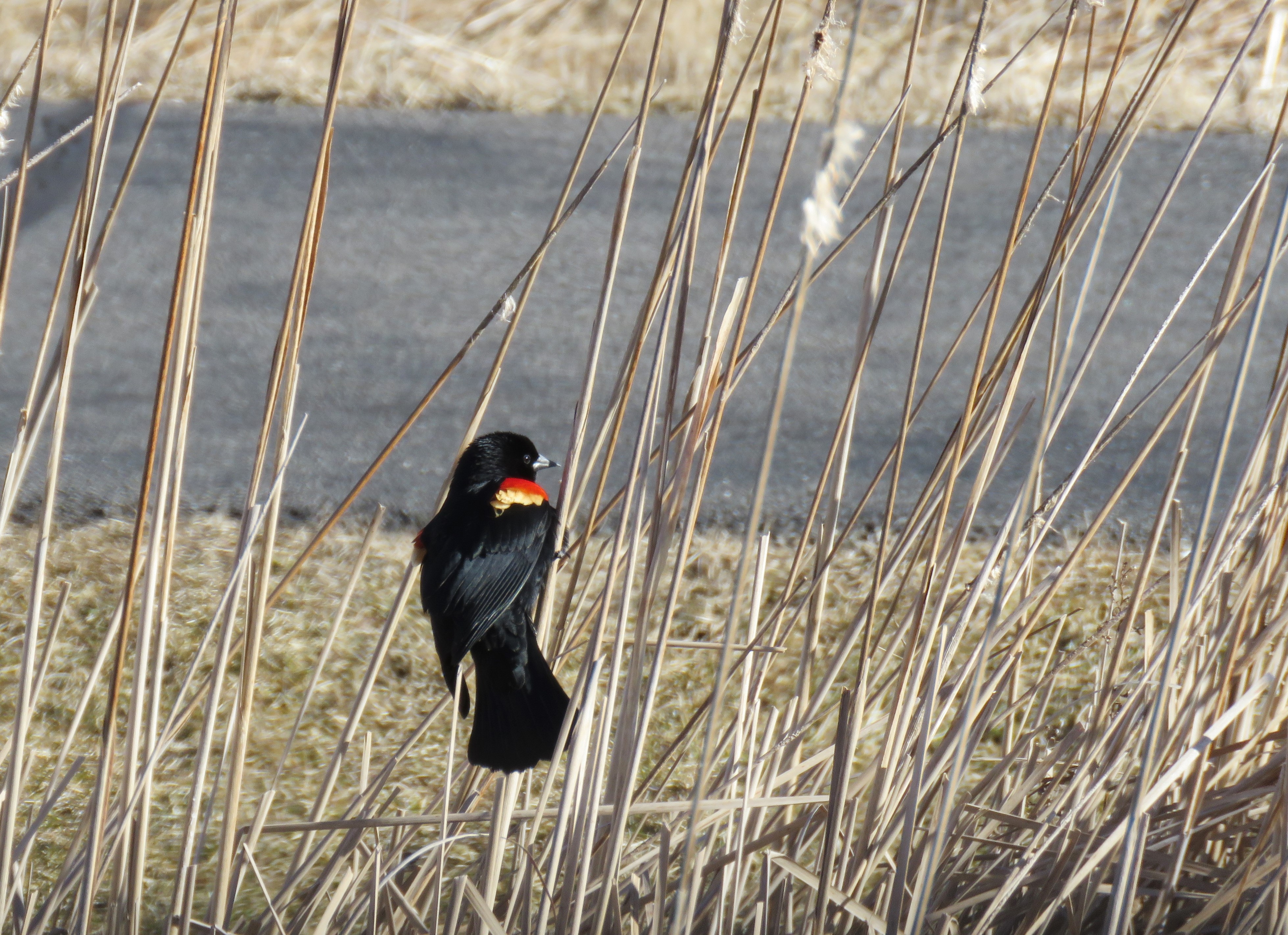 Muskrats have emerged from their winter darkened world within their lodges of cattails. They seem to revel in the warmth of sunlight and position themselves to soak up the sun’s warmth and perhaps dream of fresh green emergent vegetation. 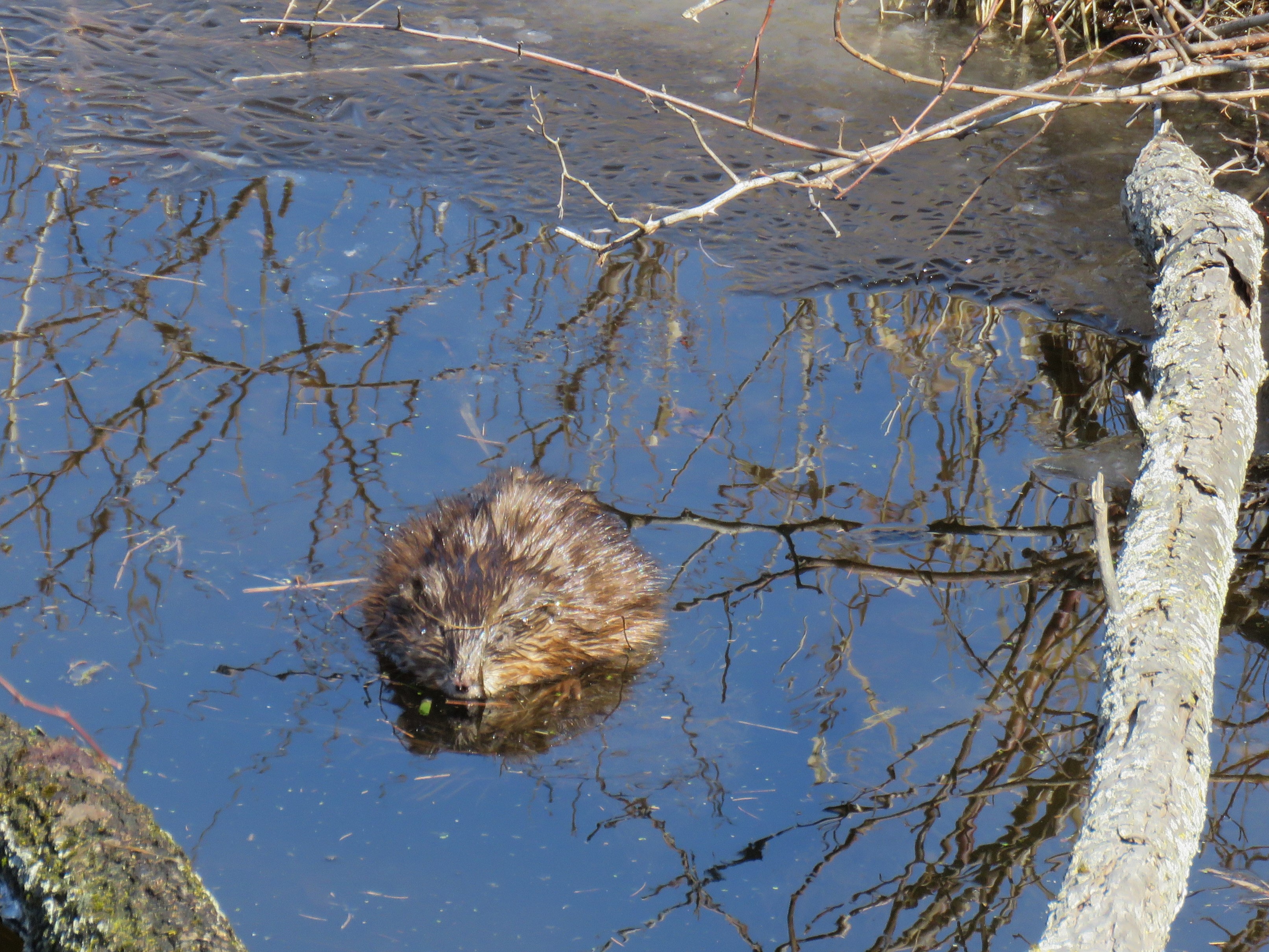 American Woodcocks, often colloquially referred to as timberdoodles or bogsuckers, have returned to secluded meadows and open areas in Oakland County for their amazing courtship sky dancing ritual, a wonder of nature to behold. They are a bird that’s next to impossible to photograph, although I will try again next week at the Highland State Recreation Area. My birder/naturalist friend Jeff Nedwick managed to capture the image below of a pair of woodcocks last week, shortly before sky dances began, an event best and beautifully described by Aldo Leopold in his 1949 collection of essays and recollections, A Sand County Almanac:

“He flies in low from some neighboring thicket, alights on the bare moss, and at once begins the overture: a series of queer throaty peents spaced about two seconds apart, and sounding much like the summer call of the nighthawk. Suddenly the peenting ceases and the bird flutters skyward in a series of wide spirals, emitting a musical twitter. Up and up he goes, the spirals steeper and smaller, the twittering louder and louder, until the performer is only a speck in the sky. Then, without warning, he tumbles like a crippled plane, giving voice in a soft liquid warble that a March bluebird might envy. At a few feet from the ground he levels off and returns to his peenting ground, usually to the exact spot where the performance began, and there resumes his peenting.” 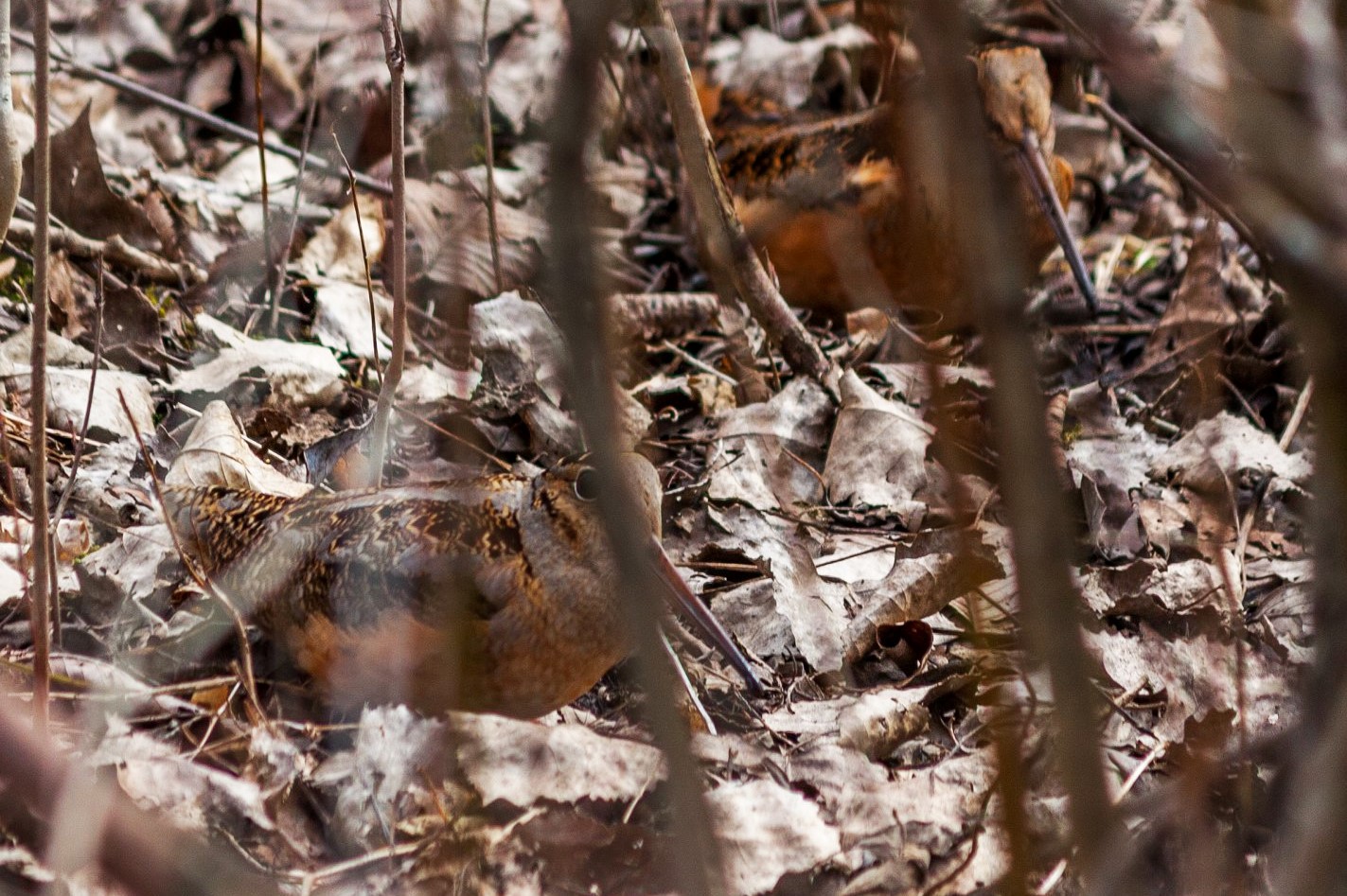 Celebrate spring – for the season is rich with the wonders of nature. You won’t experience wonders staying indoors, so perhaps make this spring your spring to embrace the ways of nature on the trails of Oakland County.