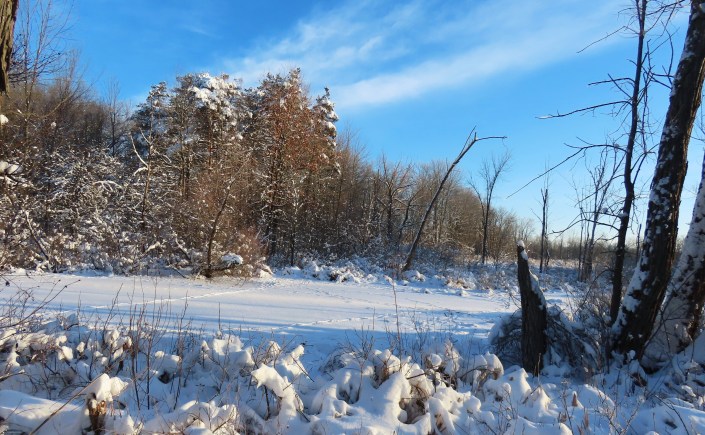 December 21st brought us the Winter Solstice, the first day of winter. Perhaps you heard winter knocking at your door? That moment in time officially arrived at 4:48 p.m. EST. It was the shortest day of the year with only 8 hours and 46 minutes of daylight. Hours of daylight are now slowly increasing as we creep towards the dawn of spring; just three months away but still well-hidden over the horizon. The dawn of winter, however, is an exciting time. It reminds me to get my cross country skis out of hibernation to be ready for winter adventure in our parks and to plan northern adventures.

What exactly is the solstice? The Farmers’ Almanac describes it this way:

“On the day of the winter solstice, we are tilted as far away from the Sun as possible, which means that the Sun’s path across the sky is as low in the sky as it can be. Think about the daily path of the Sun: It rises in the east and sets in the west, arcing across the sky overhead. During the summer, the Sun arcs high in the sky, but during the winter, it arcs lower, closer to the horizon.”

How can we observe the effects of solstice on ourselves? The Farmers’ Almanac writes:

“On the day of the solstice, stand outside at noon and look at your shadow. It’s the longest shadow that you’ll cast all year! Do this again on the day of the summer solstice and you’ll see almost no shadow at all.”

Wildlife responds rather predictability to changing seasons as a result of eons of evolution. Groundhogs burrowed down a few months ago as their food supply vanished and their celebratory shadow hunt to see when spring arrives is two months away. Foxes and coyotes became very active when winter started knocking at the door, because that time frame coincides with their mating season. I’ve been hearing the yip, or perhaps I should call it a sharp bark, of a fox for the past few nights and a few evenings ago the deep baritone hoot of a Great Horned Owl was music to my ears.

Just before I started sorting through my signs of winter’s approach photos, I discovered a large mound of earth that suddenly appeared in my yard in a period of less than twenty four hours. A bit of fact-checking confirmed my suspicion that it was created by a star-nose mole that had burrowed down deeper in preparation for winter, and the extracted soil had to go somewhere.

Eastern Bluebirds used to be looked to as the winged harbinger of spring. That had been considered a “fact” ever since Thoreau’s timeless words of “The bluebird comes and with his warble drills the ice and sets free the rivers and ponds and frozen ground…the leading edge of spring.”

Things have changed, perhaps due to global warming. Many bluebirds no longer migrate out of Michigan, and I look at their increased presence at my suet feeder and adjacent tree branches as their proclamation that winter is knocking at the door.

With leaves carpeting the forest floor, we are presented with an opportunity to admire the silhouettes and characteristics of our hardwood trees. Some trees have bark that is super smooth, while the bark of other trees, such as black cherry, appear jagged and rough.

Rabbits have a risky lifestyle, but their explosive breeding habits compensate for this. They sometimes shelter under my old wooden porch or in a small thicket nearby. Tracks in the snow last year, clearly indicated at least one was living in the upper chambers of a groundhog burrow. Hibernating groundhogs have no idea they have uninvited seasonal house guests of a different species. Perhaps the extra body warmth made it easier for both species. Rabbits now scrounge under my bird feeders for seed spillage, but to reach the feeders they must cross an open space, making them a target for red-tailed hawks in the daylight and Great Horned Owls at night. That too is nature’s way.

With winter taking hold, much of nature’s world is now absent of bright color, but there are exceptions, one of which is found in abundance at the edge of my swamp. That’s the aptly named Winterberry, also known as Michigan Holly. Winterberry provides a valuable source of food for birds and some mammals as other sources become scarce. I meandered down to my swamp to photograph the holly berries but was instantly distracted by a far more exciting find, a Great Horned Owl perched on a tree watching my intrusion. I suspect it will remain my closest encounter with an owl for a long time!

Two of our most common winter-active mammals have increased activity in the waning days of December as they prepare for serious winter weather to come knocking at the door. Deer have thicker coats now and red squirrels intensified their hunt for black walnuts and created middens on the forest floor. What’s a midden? Middens are piles of shredded evergreen cones, evidence that a squirrel feasted up above in the waning days of December. Perhaps you have seen them?

While the weather outside may be frightful, as the old saying goes, winter is one of the most exciting times to hike, explore, and have memorable encounters in the wild. With that thought in mind, last week I had another whirlwind adventure at Sleeping Bear Dunes National Lakeshore, a site where adventure is always found. It’s also the location where I had the ultimate pleasure a few years ago when I silently cross-country skied down a backcountry trail buried in fresh powdery snowy and startled an eastern coyote that gave me a quick glance and bolted away. I am so happy my camera was at the ready! I wonder what surprises await me this winter in Oakland County and landscapes beyond.

Keep safety and situational awareness in mind when winter adventuring. It’s always best to go with a friend or let someone know your plans. Nature’s way brings rich rewards when winter knocks at the door. Perhaps you too will be gifted with a splendid sunrise on the wilder side of Oakland County.