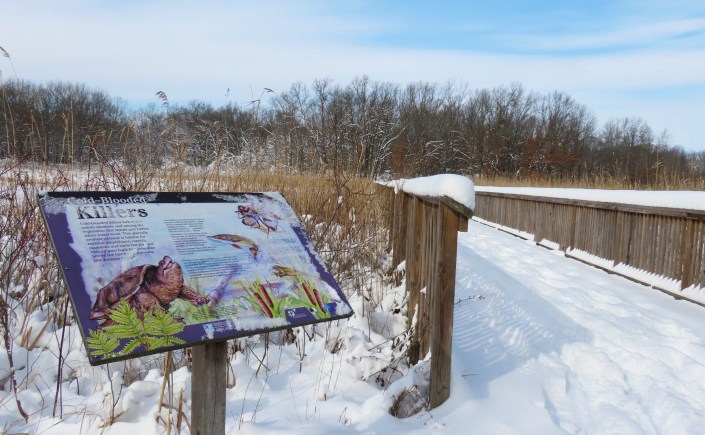 Rose Oaks County Park is a park for all seasons. In winter, it’s a spectacular site that lures adventurers, cross country skiers, hikers, and winter fungi foragers. This is a park for just about anyone who wants an invigorating trek of exploration along meandering trails, or perhaps just wants to embrace nature’s way on a quiet woodland walk in Oakland County.

Unlike the winter hustle and bustle and modern amenities of Independence Oaks, Orion Oaks and Addison Oaks County Parks, Rose Oaks is far more rustic, and that can make it just perfect for a well-planned winter hike or cross country skiing adventure of peaceful solitude. Rose Oaks has no buildings or facilities beyond primitive outhouses at the park’s two entrances, but this 640-acre park is a wonderland of natural beauty with a great trail system.

Rose Oaks is located in Rose Township in rural northwestern Oakland County a few miles south of Holly. It can be accessed from its east entrance on Buckhorn Lake Road or from its west entrance on Fish Lake Road, which is designed for equestrian access. Use caution on both roads, as they are often covered with hard packed snow and may be icy. Safety should always be on your mind when winter hiking, especially in a less-visited park. No ice should ever be considered totally safe ice, since many lakes freeze unevenly and some are spring fed.

I’ve hiked and explored the park in all seasons and have never been disappointed. I worked with Oakland County Parks and Recreation park planners on trail layout projects and documented construction of equestrian-friendly bridges as the park was prepared for public use. Interpretive signs that share natural history details of the landscape and creatures were installed eight years ago and remain in place and accurate today.

Six named lakes are within the bounds of Rose Oaks: Richardson Lake, Esler Lake, Mallett Lake, Prairie Lake and Big School Lot Lake. A small section of Rose Oaks is immediately across from Buckhorn Lake Road and that’s where number six, Cogger Lake, is located. In addition to abundant wetlands, the park has several smaller unnamed kettle lakes — a depression formed in the glacier’s outwash plain by the weight of blocks of ice that were left behind by retreating glaciers. Although mastodon remains have never been found at Rose Oaks, its topography and location tell me that one day that may happen.

The trails are primitive. They are not plowed or maintained in winter, making for excellent conditions for cross country skiing or snowshoeing. This map shows the location of the trail system that totals about five miles.

I returned to the park last Friday, entering from the east side and headed directly toward trail marker (TM) 15, just a few hundred feet from the park entrance. As the trail map shows, TM 1 is on the west side of the park on Fish Lake Road. Using the map lessens confusion, and most junctions along the trail have posted maps.

The eye-catching Cold Blooded Killers interpretive sign is at the east side of the boardwalk that takes adventurers across a frozen marsh and then on toward the Richardson Loop Trail, a favorite destination of mine, and my planned route for this early February adventure. Cold-blooded killers is a reference to cold blooded creatures in the frozen wetland including snapping turtles, northern pike, and bullfrogs.

After crossing the boardwalk and cross country skiing through woodlands towards TM 12, my attention focused on a wealth of tracks from my favorite wildland creature, the Eastern coyote. These elusive “song dogs” that will break into a chorus of yips and howls are seldom seen but their tracks share part of their winter story.

Seven years have passed since the night I set a motion activated wildlife camera trap near a brushy area overlooking Richardson Lake, the largest of the park’s six lakes. I selected that site with hopes of capturing a coyote image but did not expect two rather dramatic images in less than 24 hours. This video with audio shows that my hidden video trail camera trap set up. The two photos that follow are favorite captures from that location. It remains an active coyote area.

The boardwalks on the southeast side of Richardson Lake take trekkers over a swampy area that is beaver habitat. In winter it’s a perfect place to just breathe in the fresh air and listen to the sounds of nature. The small island between the boardwalks was a perfect place for my brief hot cocoa rest stop. The boardwalk also provides an ideal birding location and is the site from which I photographed both Red-bellied Woodpeckers and Northern Flickers hunting for hibernating insects or dead larva in the swamp’s dead trees.

I then followed the east shore of the lake and opted out of crossing another boardwalk near TM 11 that would have led to the northeast corner of the park. Instead, I continued to follow the Richardson Loop trail that makes a gentle ascent onto a glacial moraine along the west shore of the lake. The wooded moraine presents beautiful views of the landscape and lakeshore and the southwest corner of the lake. I also took the opportunity to cruise down part of the trail on cross country skis.

The deep snow along the route gave clues to wildlife in the area. As I stopped to brush snow off myself after my one fall, I noticed a frosty opening of a partial buried hollow log. Tracks in the snow told me a skunk had taken refuge at that location. Deer tracks were everywhere and it was easy to spot where they had slept and also kicked about the snow to uncover fallen acorns.

I continued to ski along through the enticing landscape, listening to birds, watching squirrels, and hoping to see a Barred Owl in a swampy area as I neared TM 8. I did not, but suspect the owl saw me. The park site was once farmed and included homesteads, with some evidence still present, including stone walls, rocks piled when fields were cleared, old fence lines, and a stone fireplace near the north shore of Esler Lake.

At the shoreline of Esler Lake, I brushed snow off the beaver habitat interpretive sign and then skied on, taking in the splendor of the silent landscape. Many of the trees had one side packed with heavy, wet snow from earlier strong winds, and shoreline vegetation was artistically bent low from the weight of snow. One of the most colorful parts of my trek were the bright pink manure buckets strategically placed near the boardwalks for equestrian use. Twenty minutes later, I was back where I started; two hours well spent on a beautiful winter’s day on the wilder side of Oakland County.

Perhaps make Rose Oaks one of your wilder side explorations this winter. Five miles of interconnected trails await. Go with a friend, or make it a well-planned adventure of solitude. It really is an astonishing park with a story to tell if you look and listen as you trek the trails. Come spring I will once again wait at the edge of the wetlands for the dance and the song of returning Sandhill Cranes. But for now I am content with trudging along the snowy trails and listening to the sounds of nature.