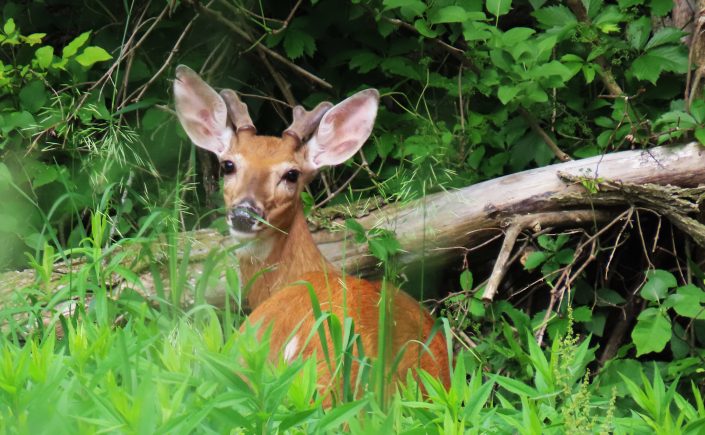 “To the attentive eye, each moment of the year has its own beauty, and in the same fields, it beholds, every hour, a picture which was never seen before, and which shall never be seen again.” – Ralph Waldo Emerson.

It’s not easy to compress an entire season into 1,000 words but I’ll give it a try in today’s Wilder Side of Oakland County. Taking place the day before the first day of summer, consider this a phenology flashback to the ways and wonders of nature while we mostly stayed home the entire season of spring.

Spring was truly a beautiful season of renewal for those with a love for nature and the ways of the wild. I meandered my woods and meadows as well as few nearby wildlands armed with my camera and abundant patience almost every day from late March until the middle of June. I found peace, pleasure and endless excitement in nature’s way. The words of Ralph Waldo Emerson, which I cited above, were my guiding light of exploration; for even common flowers and wild creatures take on special beauty when we pause long enough to watch, listen, discover, and learn. Perhaps they were your guiding lights of comfort as well?

Tom Turkeys gobbled in the dawn’s early light. Maple sap dripped. Great Horned Owls hooted from lofty nesting pines. Screech Owls trilled in the evening. Eastern Bluebirds flitted above fields and some discovered vacant nesting boxes, including a pair that nested successfully in a new nesting box on my wooden fence. Marsh marigolds emerged in swamps adding splashes of yellow to the season. Chipmunks appeared in woodlands and surveyed their world with a mix of caution and curiosity.

As many of us discovered, “Social Distancing” signs were placed along well-managed popular trails that lured hikers out into fresh air and inoculated them with healthy doses of nature embracing adventure. March was also the month I discovered the secret of wild ginger for the first time, a trail tale with a fascinating botanical twist I’ll save for another day.

May is the month of morel mushrooms! Robins nested under eaves and on decorative support pillars of suburban homes. Tree Swallows swooped low over ponds. Osprey dove for fish. Goslings paddled next to watchful Geese. Fawns explored their world. Ruby-throated Hummingbirds were everywhere! Delicate round-lobed hepatic appeared in dappled sunlight. Baltimore Orioles thrilled hundreds as they feasted at feeders that held fresh oranges. Painted turtles gathered by the dozens on partially submerged logs to bask in late afternoon sunlight.

My best surprise of the month came in the last days of May as I wandered down to my swamp to check on my “wilder side” Robin that nested out of sight in the crotch of a tree surrounded by water. As I walked through the adjacent moist meadow, I encountered yellow lady’s slippers that had emerged unseen until nature’s calendar – think phenology – said to the yellow lady’s slippers, a native wild orchid of Oakland County, “Now is your time to bloom.” I’ve already marked my calendar to see if they bloom on the same date next year.

Summer-like heat spawned storms with powerful tree-felling punches and moments of torrential rain. But that gift from the sky assured gardens would thrive and the ways of nature surged forward. Turtles crossed roads on egg-laying missions. Wild strawberries ripened.  Beautiful dragonflies appeared in enormous numbers keeping mosquitos in check as they zipped low over fields pausing to rest on wildflowers and weeds. Newly hatched Killdeer chicks with bright eyes and fluffy feathers walked on spindly legs. Handsome bucks grew new “velvet” coated antlers, and one found a place to hunker down in my meadow. Tiny spittlebugs looking like cartoon creatures appeared, and I “posed” a few on a finger.

Melodious trills of hidden gray treefrogs added a magical rhythm to the evening, sometimes to accompaniment of the deep baritone bellow of bullfrogs. The real star of the amphibian world, for nature-loving humans that find pleasure in nature’s way, are the well-camouflaged green frogs that remain motionless amidst duckweed waiting for an insect to come within in range as the dawn of summer draws near.

And so it was for the stay at home months of spring as nature’s way marched on and some of us followed phenology for the first time.

Tomorrow is the first day of summer and I plan on continuing to live the words of Gary Snyder in The Practice of the Wild.  “The wild requires that we learn the terrain, nod to all the plants and animals and birds, ford the streams and cross the ridges, and tell a good story when we get back home.”  I’ll be sharing both new and encore editions of nature and wildlife “good stories” every week from the Wilder Side of Oakland County.

6 thoughts on “Nature’s Wonder – While We Stayed Home”