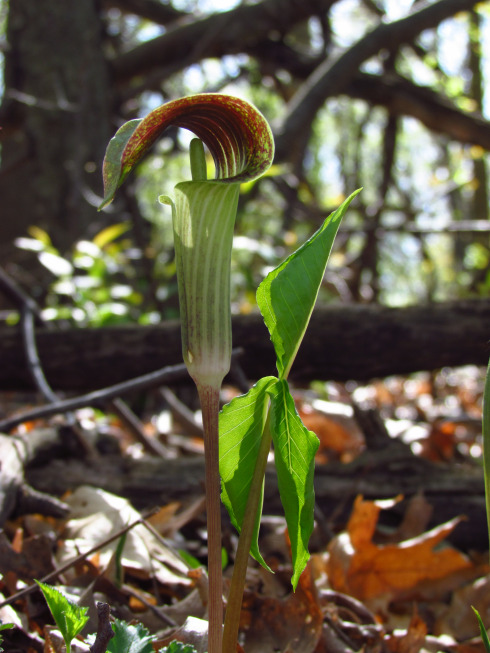 Jack-in-the-Pulpit (Arisaema triphyllum) is perhaps the oddest of the beautiful woodland wildflowers of late May. It is the kind of wildflower that evokes images of fairies and elves and sometimes provides a canopy of leafy shelter for tiny insect hunting toads and foraging salamanders. Jack-in-the-Pulpit is a lover of fertile moist woodlands and once seen is never forgotten.

The name Jack-in-the-Pulpit comes from the intriguing shape of this beautiful flower that if very much at home in the larger woodlands and parklands of Oakland County. Better Home and Gardens states; “The tiny upright flower spike looks like a tiny man standing in an old-fashioned raised pulpit.” A closer look spiced with knowledge may be needed for Jack-in-the-Pulpit has both male and female plants and some plants change gender from one year to another. Jill-in-the-Pulpit exists! 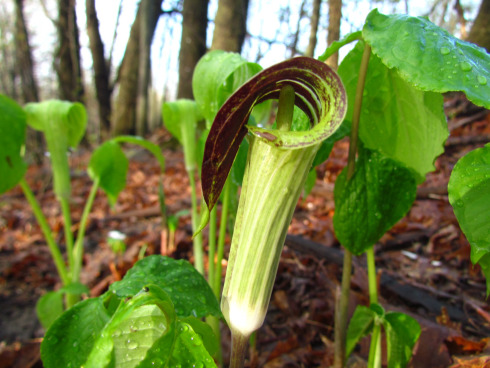 The United States Department of Agriculture Data Base explains the plant’s sex choice this way (abbreviated): “Jack-in-the-Pulpit is able to change its sex between growing seasons. If a particular plant was a female in one growing season and was able to produce many seed, it is likely that that plant was not able to store much energy for the following growing season in its underground corm as most of its resources would have been devoted to reproduction. The following growing season the same plant would have better reproductive success by being a male or a non-flowering plant. With less energy reserves, the plant would be able to devote much of its energy to growth and production of pollen which takes less energy the production of seeds.” 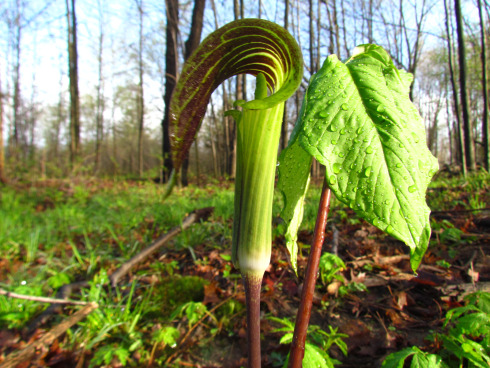 There is an easy way to tell if the plant is male or female without poking and prodding under the pulpit at the hidden flowers to check for subtle botanical gender clues. Look at the leaves! If there is but one leaf adjacent to the pulpit it’s a male. Two leaves and you found Jill, a hard-working female that thrives in the woodland shade on the Wilder Side of Oakland County. 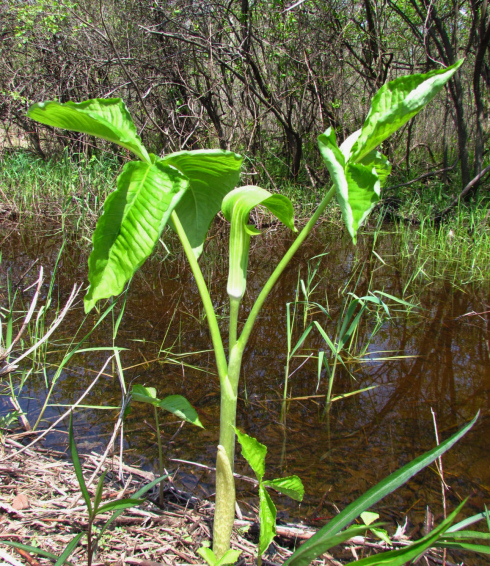 One thought on “Jack in the Pulpit—or is this one Jill?”