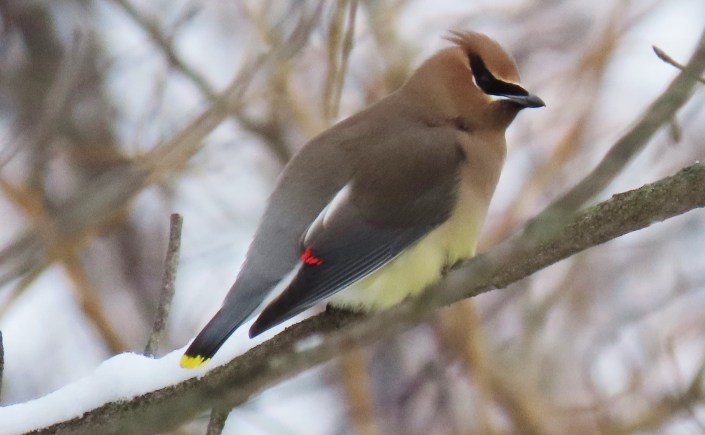 “Everyone likes birds. What wild creature is more accessible to our eyes and ears, as close to us and everyone in the world, as universal as a bird?” – Nature historian David Attenborough

January 5th was more than the first Thursday of the month. It was National Bird Day, an annual event I was totally unaware of until a few days after the event. After that date passed by, I was politely chastised by a friend of mine who is an avid birder for missing that day as a blog topic. I decided late is better than never, especially after reading the words of David Attenborough’s.

I’ve already made a notation in my 2024 calendar to promote National Bird Day next year; before the fact, not afterwards, and am enthusiastically thinking about birds now with my feeders exploding with activity. Hearing the deep hooting of a Great Horned Owl last night sealed the deal, and so now with a cup of coffee in my hand I sit down and write as the morning sun casts its glow.

True confession time: I never considered myself a “birder.” However, perhaps I am. I enjoy seeing birds at my well-stocked feeders and can identify most of the common winter visitors. Yesterday afternoon, before the sun slipped away, I watched a Cardinal, numerous House Sparrows, a Chickadee, and two Downy Woodpeckers jousting for positions on a feeder overflowing with seeds and suet, as a Hairy Woodpecker pecked away on the adjacent silver maple.

Come spring, numerous species of Warblers and Vireos, along with our common House Wren, will be flitting about the tree branches as they hunt tiny insects. I’m completely lost, however, when it comes to making positive identifications of these tiny birds, but as a casual birder, I still take great pleasure in watching the action.

Every now and then the action gets explosive when a Cooper’s Hawk swoops in for a feathery meal and they scatter. I’ve yet to capture the hawk in action, but have photos of it perched in an adjacent tree watching the feeders and waiting for prey.

Something just occurred to me as I pound away on the keyboard and a Hairy Woodpecker pounds away on a suet block attached to my den’s window with suction cups. Perhaps I am actually a real birder without even knowing it. So what exactly is a birder? I would say a birder is casually defined as a person who intentionally observes and identifies birds in their natural habitat, be it in their own yard, or at a destination where an interesting sighting has been confirmed.

The verb “birding” is new to many non-birders and it means actively looking for a particular or multiple species as in, “Let’s go birding.” I think I could consider myself an avid accidental birder, which I will define as someone that takes great pleasure in observing birds wherever they are without searching for them.

Accidental birding is fun for me, but on occasion, I set out for a particular location with hopes of seeing a particular species. In January and early February that species is always the Snowy Owl, and the location is Michigan’s thumb region. Unlike most owls, these stunning beauties are diurnal and can often be photographed with ease once a car window is lowered, since they will perch on roadside poles. Those tall poles give them a clear view of the adjacent farm fields, locations with plentiful meadow voles and rabbits. For the rest of the year, the owls are back in their breeding grounds in the Canadian Arctic where lemmings are the primary prey.

I take great pleasure in observing birds even when they are accidently encountered without searching for them. Thinking back and looking through my less than perfectly organized photo files, I have had some exciting accidental sightings of lesser seen birds in Oakland County, at Sleeping Bear Dunes National Lakeshore and in travels in Africa and Israel. On the next sunny day, perhaps tomorrow,  I’ll be driving back to Stony Creek Metropark to view an active Bald Eagle nest I’ve been paying attention to for the past four or five years.

There are four species of birds I always watch for in various times of the year: the very common House Wren, the increasingly common Pileated Woodpecker, Snowy Owls, and the American White Pelican. I instantly recognize the song of the House Wren and like to think they are singing for me when they perch on branches and Wren houses in my arbor.

The flight and pounding of the Pileated Woodpecker is unmistakable, and they seem to be increasingly common in northern Oakland County. If there are confirmed sightings of Snowy Owls, I will travel miles to see them and as I write these words, I’m planning a quick return trip up to a location in Michigan’s thumb where Snowy Owls have gathered for a meadow vole banquet, with perhaps a duck tossed in now and then.

Pelican sightings are becoming more common in the Great Lakes region, and have been spotted, on occasion, in southeast Michigan, including Oakland County. I hope to see them this spring at one of their favorite rest stops, a location I know well, South Manitou Island. South Manitou is a 5,280 acre, federally-protected island in the Manitou Passage of Lake Michigan and is part of Sleeping Bear Dunes National Lakeshore.

The first time I saw pelicans in Michigan was from the catwalk of the island’s lighthouse, where I have worked seasonally for the past four years during June as a volunteer lighthouse keeper for Sleeping Bear Dunes National Lakeshore. About a dozen Pelicans flew by the lighthouse, banked sharply and landed almost in front of me.

I was so excited to share the news that after snapping about a dozen photos, including of one pelican apparently yawning, I made a humorous error on the portable radio. I notified the park biologist that I just saw a flock of penguins land. The bird-savvy biologist was rather confused since penguins are thousands of miles away and flightless. I quickly corrected my mistake and watched the pelicans for almost an hour and endured the good natured penguin teasing later.

Perhaps that’s the beauty of birding. You never know what you are going to see, or think you saw in Oakland County and beyond. It’s a new year, go birding!