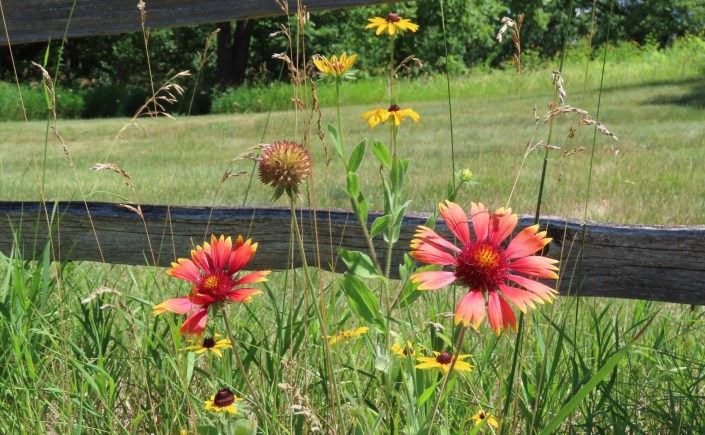 “The ordinary citizen today assumes that science knows what makes the community clock tick; the scientist is equally sure that he does not. He knows that the biotic mechanism is so complex that its workings may never be fully understood.” –Aldo Leopold

I take great pleasure in observing common place “little things” of nature’s way, even when I do not fully understand their every changing biotic mechanism. Perhaps, you, like me, also appreciate our small wonders of nature that draw our attention or just make us smile as the “clock” of the sizzling days of summer ticks on. I’m sharing a few from this past week.

One of my favorite sights of the sultry days of summer is a male American Goldfinch flying over the thistle-rich meadow that surrounds my beehive before alighting on the fence. Sometimes I think he is posing for my camera. Goldfinch are late nesters when compared to many other song bird species. Mid to late summer nesting creates an advantage for this golden bird of summer—a late summer supply of seeds to feed the hatchlings.

In my corner of the wilder side of Oakland County, they are just now setting up housekeeping. Although goldfinch ignore the constant flight of honeybees just yards away, I have witnessed them diving down into the weedy meadow from the fence line perch, perhaps to supplement his thistle seed diet with ground dwelling insects.

I was blissfully unaware of the existence of our amazing hover flies that thrive in Oakland County until last week when I zoomed in with my camera to photograph the blue pollen of chicory. A tiny wasp-like creature was perched on the chicory blossom, and each time I bent forward for a photo it would vanish, only to return a few seconds later. A closer look at the image by my highly observant nature-embracing companion revealed that I actually photographed a pair of hoverflies mating, something I had not even noticed. These very tiny, fast-moving insects resemble small wasps, but they do not sting and are distinctive in their ability to hover near plants or inquisitive people. One seemed like it wanted to land on me, and perhaps it did since I later discovered hover flies are attracted to salty sweat.

Watching bumblebees bumble around swamp rose flowers is one of the best little things of nature to observe in the heat of the summer as I did earlier this week at Independence Oaks County Park. The fragrant pink flowers of swamp rose attracts butterflies, and provides food and cover for birds. Although their very existence is often overlooked by humans, swamp rose is found in every state east of the Mississippi River, and as the common name indicates, it is a shrub of wetlands and thrives in healthy, shallow water.

Indian Pipe is emerging once again in the woodlands of Oakland County. This beautiful specimen appeared a few days ago along a woodland path a few hundred feet from my house. These strange-looking plants with a white or pinkish-white, bell-shaped flower are pollinated by small bumblebees.

Once the bloom is pollinated, the “bell” creates a seed capsule that eventually releases tiny seeds into the wind.  Indian pipe is also known as “ghost plant,” and is sometimes referred to as “corpse plant” because of its strange appearance. Indian pipe is in fact a parasitic plant that survives by borrowing nutrients from certain fungi, trees, and decaying plant matter.

I love House Wrens. These rather plain brown birds with an effervescent voice often keep me company when I’m sitting in my arbor. I’ll watch them zip through shrubs and low tree branches, snatching at insects or sitting motionless, waiting to detect an insect below. House Wrens readily use nest boxes, and at times they will even set up housekeeping in old boots left hanging on a fence. Look for wrens foraging for insects in low tree branches, shrubs, and brush piles in backyards, parks, and open woods. The more places there are for insects to hide, the better the habitat is for House Wrens. That small fact of nature’s way means closely cropped, chemically treated suburban lawns do not favor house wrens. My unkempt wild meadow is five star living for them—and me.

Common Mullein is often referred to as one of the most conspicuous wildflower weeds of summer and is easily recognized by its upright appearance, fuzzy leaves, and yellow flowers. I cringe when I hear mullein referred to as a weed. American Goldfinch devour the ripe seeds, and in late autumn, many small insects use their fallen leaves as hibernation sites.

Mullein has been used as a remedy for respiratory, gastrointestinal, and dermatological issues. The thick, soft leaves have been referred to as “cowboy toilet paper,” and the soft piles of fallen leaves make great hibernating sites for insects. Mullein is native to Europe, northern Africa, and Asia. It was intentionally introduced in America by early settlers, who placed crushed seeds of common mullein into slow-moving water to poison fish, making them easy to collect and harvest.

4 thoughts on “As Summer Sizzles On”