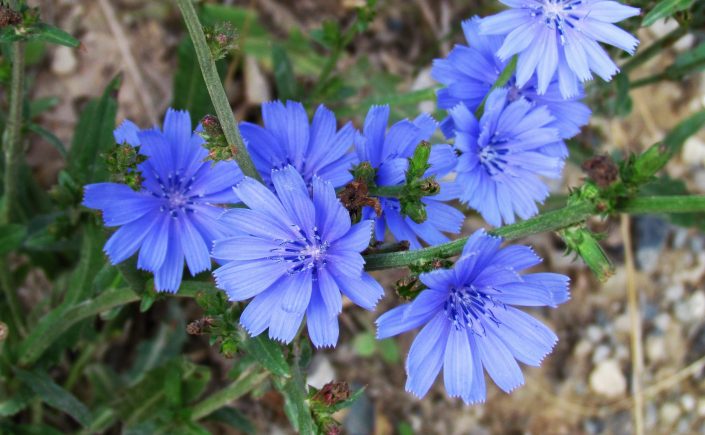 I love the tenacious manner of how chicory not only survives, but thrives along our rural roadsides. I also take pleasure in knowing that within weeks of our “weedy” rural roadsides being trimmed in northern Oakland County by the Road Commission to improve the line of sight for drivers, chicory blossoms seem to magically reappear on freshly emerged stalks. The secret behind its reappearance is actually quite simple. Chicory regrows rapidly from its large, deep taproot and that’s where this tale of chicory gets interesting. Chicory adapts to frequent mowing, which leads to the formation of flowers appearing just a few inches above the ground, beneath the reach of the mower’s blades.

Chicory has an ancient history of use in Europe and Asia. In the United States, its popularity rapidly accelerated during the Civil War when the Union Navy blocked the busy port of New Orleans and coffee shipments came to a grinding halt. Creative Louisianans then used abundant chicory roots as a coffee substitute. Even though chicory does not have the alkaloid that creates the desirable coffee buzz, it does have an enticing flavor. It also gained popularity as a coffee substitute and herb during the Great Depression. Today, chicory’s popularity has extended beyond its southern roots.

Chicory roots can be roasted as a coffee-substitute and appear in some instant coffees. They’re also sometimes used as an “enhancer” for specialty coffees and herbal teas. I’ve dug out tap roots, roasted them while camping, and then boiled them in water as an “emergency” coffee substitute: definitely bitter, but fun to try. A word of caution is needed here: never gather chicory from the edge of heavily traveled roads because the plant absorbs what’s in the soil. However, it’s often extremely difficult, if not impossible in Oakland County, to find chicory once you stray from the road’s edge.

When capturing images for The Wilder Side of Oakland County blog, I thought it would make sense to go to the northern unit of Independence Oaks County Park for a photo shoot so that I would be away from traffic when kneeling to shoot images. Although I noted chicory along the roadsides while on route to Independence Oaks, I made a surprising discovery upon arrival: no chicory. Not even one blossom could be found along the trails or within the meadows and fields. However, I sampled blackberries during my one-hour search making it both time well spent and a learning experience. Chicory was absent because its requirement for “disturbed” soil was missing.That experience served as a reminder to me that chicory hardly ever invades undisturbed, natural habitats. It’s also rarely found away from roadsides, railroads, pastures, and abandoned farm fields.

Shortly after sunrise the next morning, I walked along a rural roadside not far from that park. That roadside was awash with chicory blooms emerging amidst large blossoms of Queen Anne’s Lace, creating an eye-catching line of blue almost as far as the eye could see. Although I noted an abundance of small insects visiting its flowers and bumble bees bathing in the pale blue pollen of the chicory blossoms, it seemed to not be favored by honey bees.

Folks that sleep in may never witness the daily emergence of chicory’s delicate, pale blue blossoms since they begin to open around 7 a.m. They are almost fully open by 8 am, and are wide-open, exposing their delicate beauty by 9:30 am.They are short-lived blossoms that usually close by early afternoon, or even sooner, never to reopen again. However, the tall stems that, may grow more than four feet tall, produce multiple new blooms daily, giving the appearance the blossoms last forever. I have confirmed this fact by keeping note of the chicory growing along my steep gravel driveway and the rural road in front of my house. I’ve also noted that the open blossoms face towards the rising sun.

Most of my knowledge on chicory is first-hand experience from my long-running acquaintance with this sometimes maligned roadside beauty. I first fell in love with chicory while working at a summer camp in western New York State during my college years. As I prepared this nature’s way ramble about roadside chicory, a literature fact check revealed a romantic myth of “heartbreak” that confirmed my observations of the blossoms facing the early morning sun. Shorten the legend to a sentence or two,& and the fable goes something like this: there was a beautiful maiden that spurned all the advances of the sun and so she was turned into a chicory blossom. She was then destined to stare at the sun every morning and her sky-blue blossoms would fade away to nothing as the sun reached its noon height.

I’ve learned, mostly through cautious experience, not to fully trust the wide variety of field guides and Facebook posts about foraging for wild edibles. You should not either. Some good references that are reliable sources for both beginner and advanced foragers are Midwest Foraging: 115 Wild and Flavorful Edibles from Burdock to Wild Peach (Rose, 2015) and Nature’s Garden: A Guide to Identifying, Harvesting, and Preparing Edible Wild Plants (Thayer, 2010). I’ve read that the roots may be eaten raw or boiled. I tried boiling one and its taste was unimpressive. It was a bit like a cross between a turnip and a bitter carrot that should have been tossed a long time ago, but then again, I harvested it in late summer when it appeared dried out. Come next spring, I will once again be gathering chicory’s newly emerged, tender dandelion-like leaves from stalks out of reach of weed-cutting blades. They will make a perfect addition for any spring wild garden salad before the heat of summer rolls in once again on the wilder side of Oakland County.

6 thoughts on “Chicory: Queen of the Roadside!”