House Wren hatchlings have prodigious poop output. That’s just one of the many visual discoveries I uncovered while spying on a nesting box for the past few weeks. A confession is in order: I do not consider myself a birder. And I do not keep “life lists” of bird species as so many birders do. But when any wildlife species sets up housekeeping near me, I take notice and observe. In the case of these House Wrens, they moved into an old nesting box I had installed three years ago against the interior wood frame of my arbor, a site I use as my outdoor office and an escape from city life. The nest box is less than ten feet from my arbor desk and that gave me a bird’s eye view of their life, including diaper duty. For like all newborns, things poop. Some more than others.


Before I delve into the diaper part of story in more depth, I will share a published quote from the National Wildlife Federation: “The house wren is the most widespread native songbird in the Western Hemisphere, nesting throughout much of Canada and down to the southernmost reaches of South America as well as on the Caribbean islands. It is so common that almost any U.S. resident with backyard trees and shrubs should know this bird.” It may be a very common bird, but when I first noted their activity at the end of July, I had to take a few photos and send them to a birder friend for positive species identification since I am not one of the folks that fit that sentence from Cornell. “Yup, it’s a house wren” was the response with the additional comment that it might be their second brood of the season.

I did not need, however, to ask anyone why it would nest so close to me. For its name, HOUSE Wren, hinted strongly at the answer and was confirmed by a sentence on the Cornell Lab of Ornithology website: “House Wrens thrive around buildings, yards, farms and other human habitations with their many nooks and crannies.” My weathered wren box received a perfect five-star nesting rating by the wrens, not just because it was the right size and vacant, but because it’s in a great neighborhood for raising a family. Here’s why: My arbor overlooks a wildflower meadow and other sections of my semi-wild lawn that might make suburbanites with manicured lawns cringe and say to themselves, “He needs to cut it!” No, I don’t. But I do manage that section of my yard with prescribed fire every few years, a management technique that keeps it wild and free.

I quickly discovered the wrens forage from dawn to dusk when raising a brood and my dense cover of wildflowers, prairie grasses and dare I say “weeds” present great spatial diversity, a favorite habitat to hunt caterpillars, flies, bugs, grubs, crickets, grasshoppers, spiders and most anything else that wiggles in the vegetation or crawls along the branches of the silver maple tree that shades part of the arbor. I was excited to capture the image of one of the wrens landing on the top of the wren box with its beak firmly clamped around the neck of a praying mantis, an insect that is a master of camouflage and is not listed as a menu item for house wrens.

House Wrens are an inquisitive species and one made cameo appearances several times in front of a tiny security camera that was concealed in a larger Eastern Bluebird nesting bird box further away from the arbor. It quickly became a source of frustration for a House Wren that wanted to move in, but was blocked by the lens of the camera. The camera did capture the wren’s song, a melody I now recognize from the shrubs and trees, even when I can’t see the songster.

I was surprised to read in an Audubon Field Guide that, “Probably both parents feed nestlings.” It did not take much observation on my part to confirm that it’s not “probably,” they both do and it was often a non-stop operation. I captured video of both arriving with insects at the same time and taking part in the act of PPOR, my abbreviation for prodigious poop output removal.

I did additional research on those bags of doo-doo, properly known as “fecal sacs.” I certainly do not consider myself an expert on the subject, but I will agree wholeheartedly from my hours of observation with the words of Michael Murphy, a biologist at Portland State University and an expert on fecal sacs: “A fecal sac is essentially a diaper. It provides the parents with a self-contained structure that allows them to easily pick up feces and remove them from the nest.” What I found of interest in my observations is that when feeding flights are full speed ahead with four or five deliveries in a ten or twenty minute time span, just seconds elapse between the time a meaty morsel is delivered and the parent flies out with another floppy white fecal sac made with mucous pinched between its beak. Efficiency is fine-tuned and some Audubon literature suggests, but I could not confirm, that the hatchling turns its rear end towards the parent to present its fecal sac for removal.

As gaping mouths at the nest box opening now reveal, the brood is growing rapidly and it won’t be long until they leave their nest. A bit of fact-checking with birder friends confirmed that incubation lasted about two weeks and they leave the nest about two weeks later. The wrens that star in the blog are not alone. I have a bluebird box on the other side of the house that also has House Wren, and my meadow has three bluebirds boxes, one of which is now home for House Wrens. This confirms that House Wrens live up to their reputation as fierce competitors for nesting sites and seek out all sorts of cavities, including abandoned woodpecker cavities, gourds, and even old containers left in a desirable location. I may have more nests I have not yet discovered. 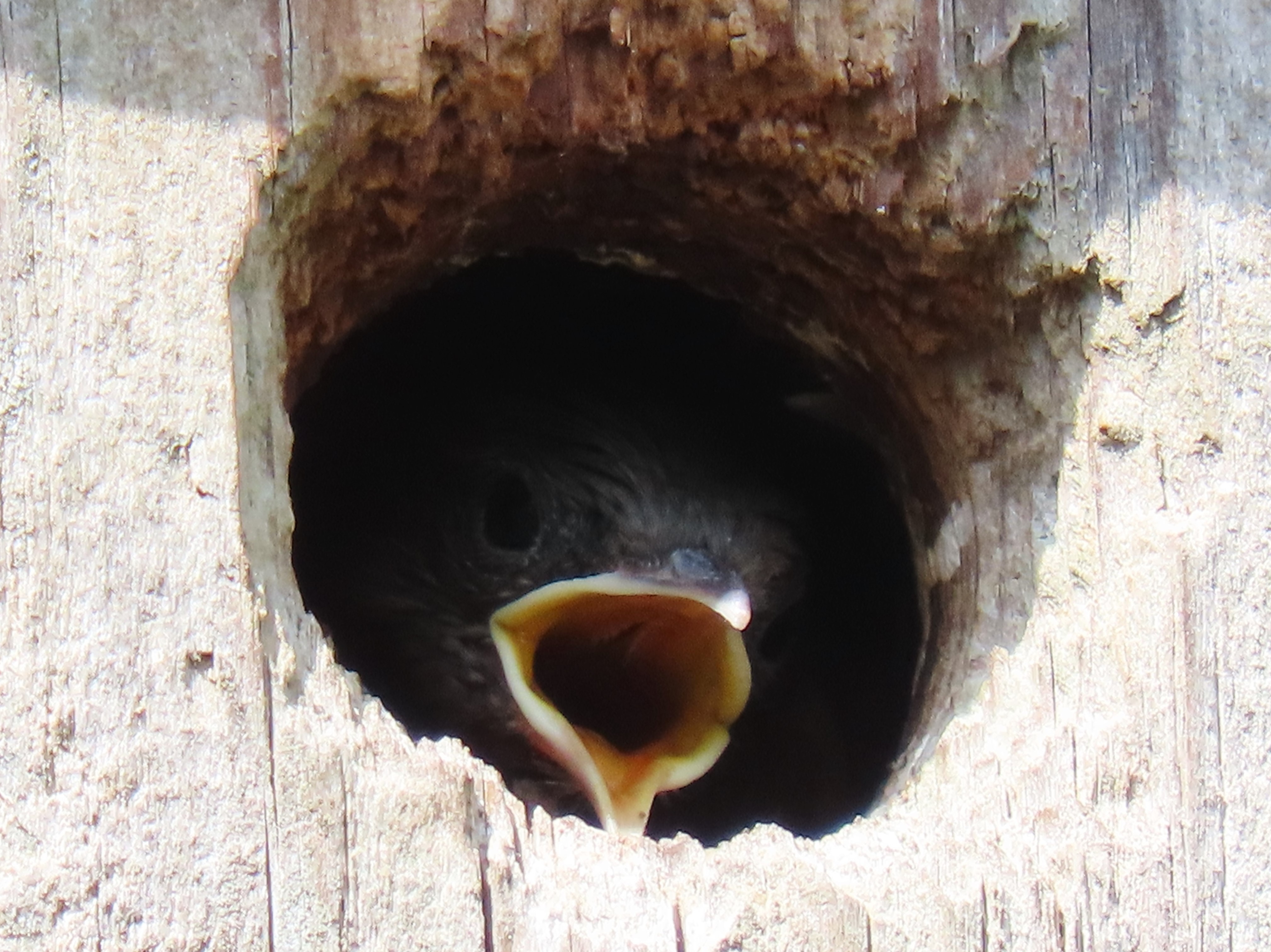 I do know this; males do the initial nest building by inserting an assortment of twigs in appealing sites and then singing their hearts out to lure a female. If a female accepts a male’s offerings, she adds lining materials that may include bits of feathers, grass, pine needles, moss or fibers and the cycle of life goes on, followed by incoming flights with captured insects and outgoing flights of prodigious poop, just one of many secrets of the House Wrens living in our midst.