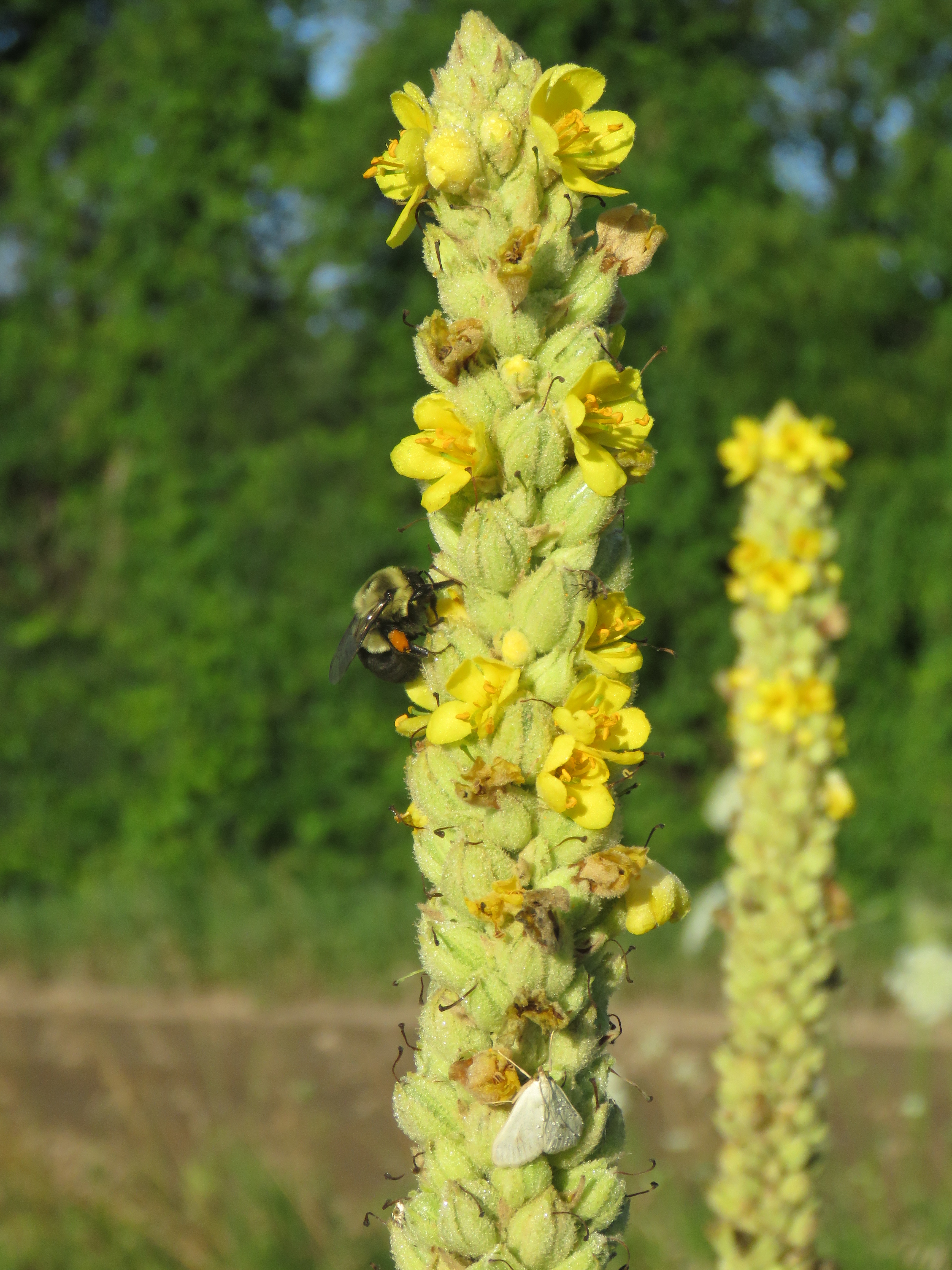 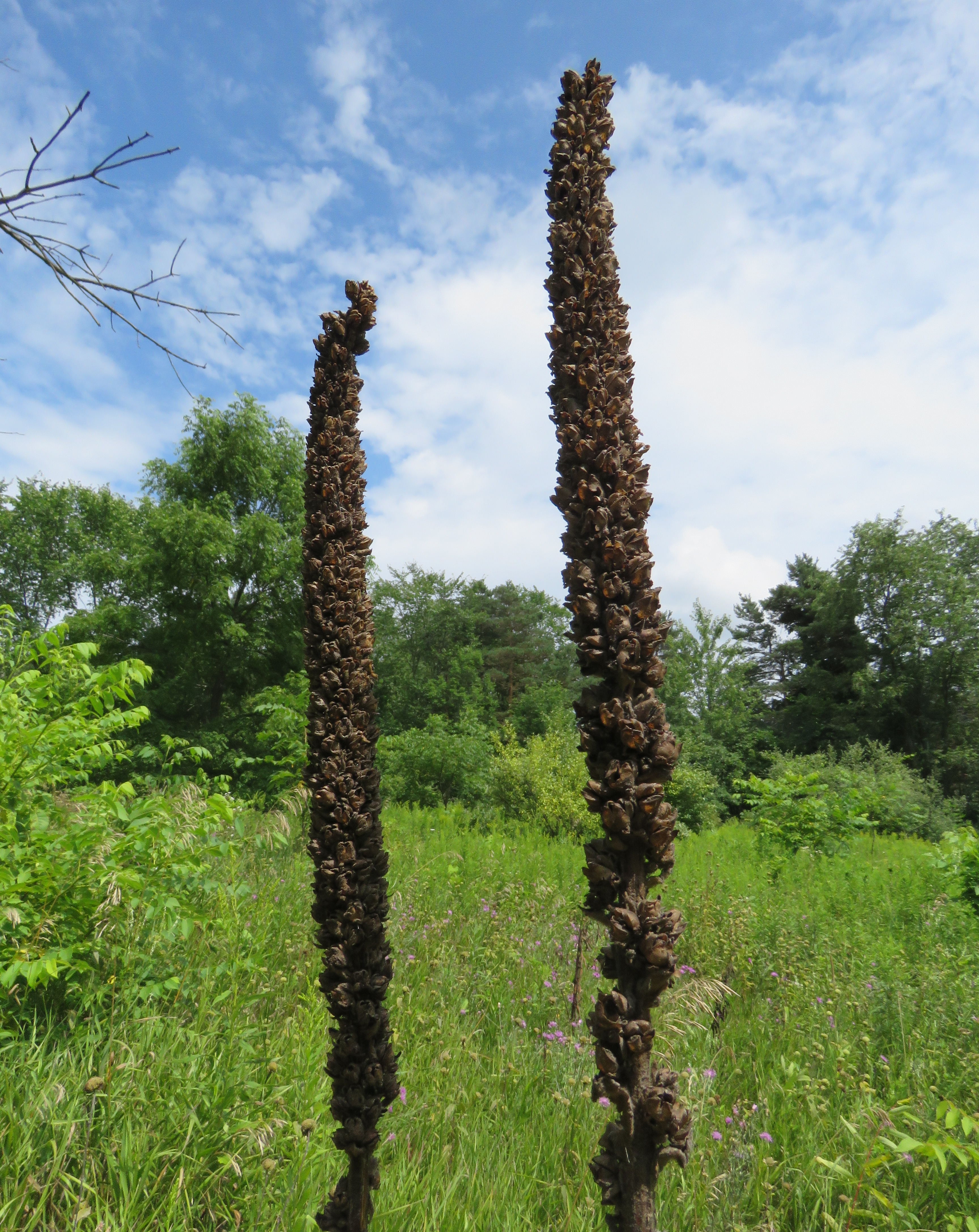 Mullein is certainly less exciting these days than in the days of Ulysses, but it still holds fascination for herbalists, naturalists, nature lovers, and little kids who call the plant “Rabbit Ears,” which is my personal favorite nickname for this sunny field-loving wildflower.

I think the tongue-twisting words “Snowshoe Hare Ears” would be more appropriate for a descriptive name, for the shape of the soft green velvety leaves are far larger than rabbit ears and they do resemble the shape of snowshoe hare ears: a species of Michigan’s northwoods. Candlewick Plant, Miner’s Candle, Bullocks Lungwort, Flannel Leaf, Devil’s Tobacco, Torchwort, Quaker Rouge, Hag’s Taper, and Blanket Leaf are just a few of the many other intriguing common names for this naturalized plant that came to our shores over a hundred years before the Revolutionary War. Backpackers have a special love and descriptive name for the mighty mullein: Cowboy Toilet Paper. 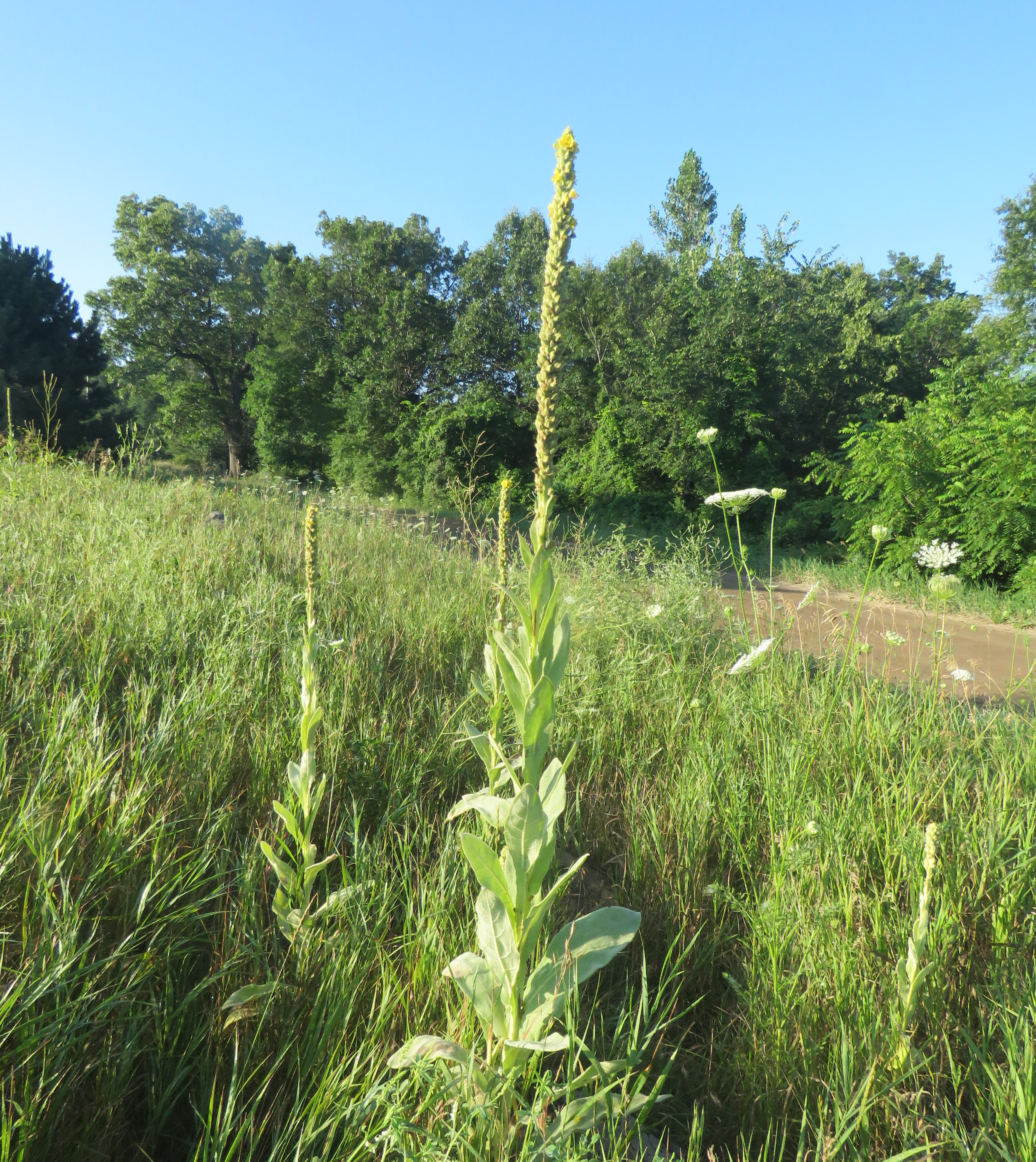 The way this plant reached our shores is a mix of fact and folklore, but it’s believed to have been brought originally to help suppress coughs, ease lung congestion, and to combat headaches, hemorrhoids, and diarrhea. This plant was a one stop pharmaceutical and still draws medical attention today. The popular online medical information website WebMD says this about the Common Mullein: “Mullein is used for cough, whooping cough, tuberculosis, bronchitis, hoarseness, pneumonia, earaches, colds, chills, flu, swine flu, fever, allergies, tonsillitis, and sore throat. Other uses include asthma, diarrhea, colic, gastrointestinal bleeding, migraines, joint pain, and gout. It is also used as a sedative and as a diuretic to increase urine output. Mullein is applied to the skin for wounds, burns, hemorrhoids, bruises, frostbite, and skin infections (cellulitis). The leaves are used topically to soften and protect the skin. In manufacturing, mullein is used as a flavoring ingredient in alcoholic beverages. The chemicals in mullein might be able to fight influenza and herpes viruses, and some bacteria that cause respiratory infections.” 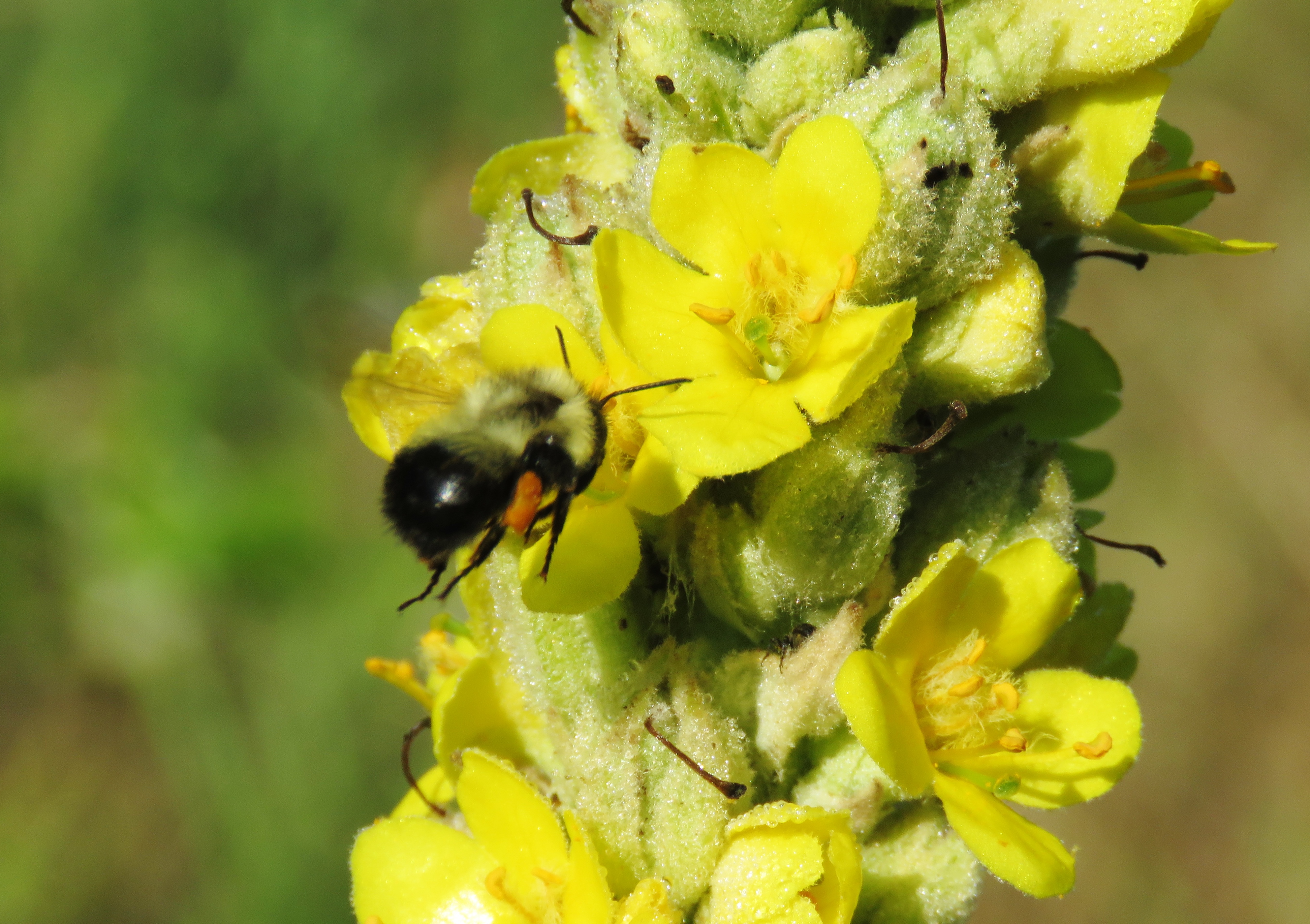 The plant also holds another use well-known, but now illegal use, developed in the Old World, but quickly learned by settlers and Native Americans: fish killing. The chemicals in the plant’s dried, crushed seeds stunned fish and brought them to the surface, making for easy catching by hand or with nets. Life Science confirms that use this way: “Common mullein is a perennial plant that was first introduced into the United States by colonies in Virginia and was used as piscicide, a chemical substance that is poisonous to fish.”

The crushed seeds, rich in saponins (Saponins are a class of chemical compounds found in abundance in various plant species) were tossed into shallow bodies of water or the bends in slow-moving waters and then natural toxic chemicals within the seeds stunned them into a degree of lethargy, where the fish would float to the surface and quickly be gathered.

Mullein is an exceptionally beautiful plant in these middle days of August, with the flowering stems of sulphur-yellow blossoms reaching over six feet tall. On cool foggy mornings the leaves of mullein often sparkle with dew, creating a diamond-like sparkle. Common Mullein flourishes in disturbed soil, meadows, fallow fields, empty urban lots, along roadside embankments, and the sun-soaked edge of our most popular and well-traversed hiking and biking trails. There are no lookalike plants, but not all mullein plants look the same, because of the way they grow. 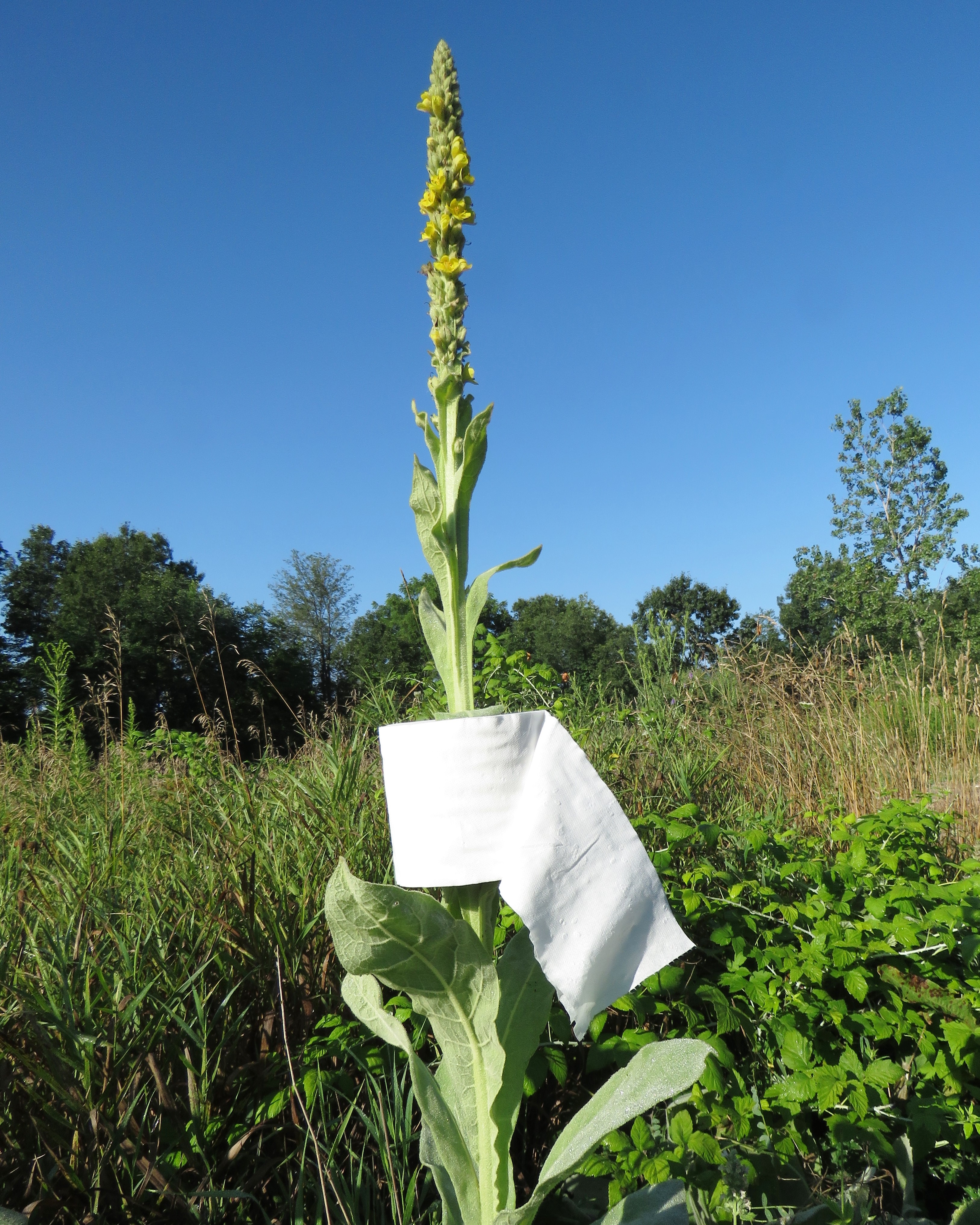 In its first year of growth, mullein forms a large basal rosette close to the ground with leaves that may be over a foot long and are extremely soft to the touch. Don’t let looks deceive you; rough contact with the soft leaves on sensitive areas of the body can lead to what medical professionals term as “contact dermatitis.” In the early days of our new nation, some Quaker women rubbed the leaves on their cheeks to create a homemade blush to attract suitors: hence the name Quaker’s Rouge. Although the leaves have been, and can be used as “Cowboy Toilet Paper,” it is best used gently and with care, and never against the grain of the leaves. 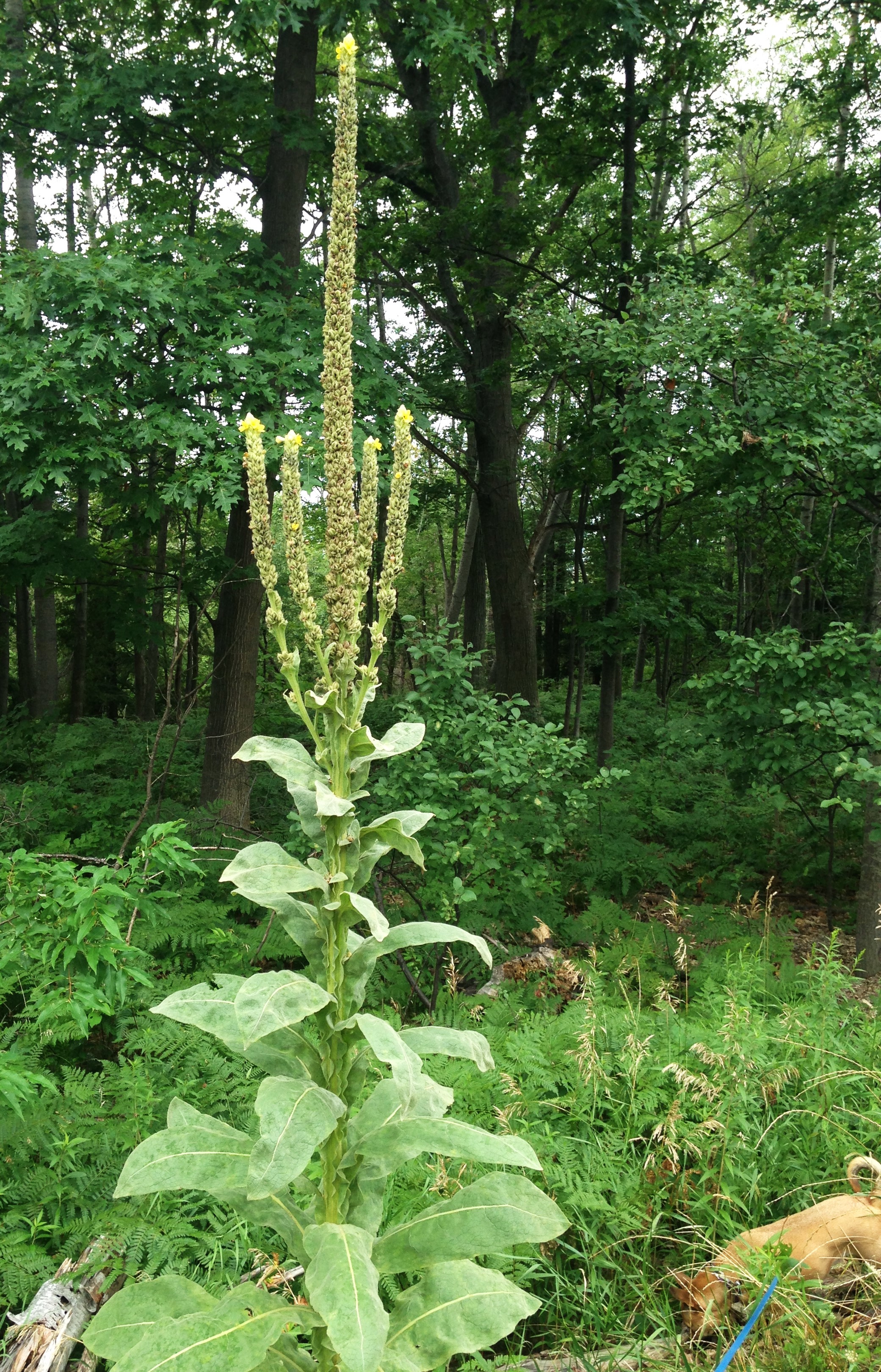 In the second year of growth, mullein produces that easily noticed flower stalk, drawing the attention of the human eye and the flight of the bumble bee, a collector of its yellow-orange pollen. The plants usually have a single stalk, but sometimes they branch into multiple stalks, as this image from northern Oakland County shared by Jeff Hanft confirms. Alternating leaves that are smaller than the large rosette leaves at the base attach directly to the stem in such a way that they are able to direct rainwater down the stem to the plant’s roots, giving the plant a survival boost over competing plants. 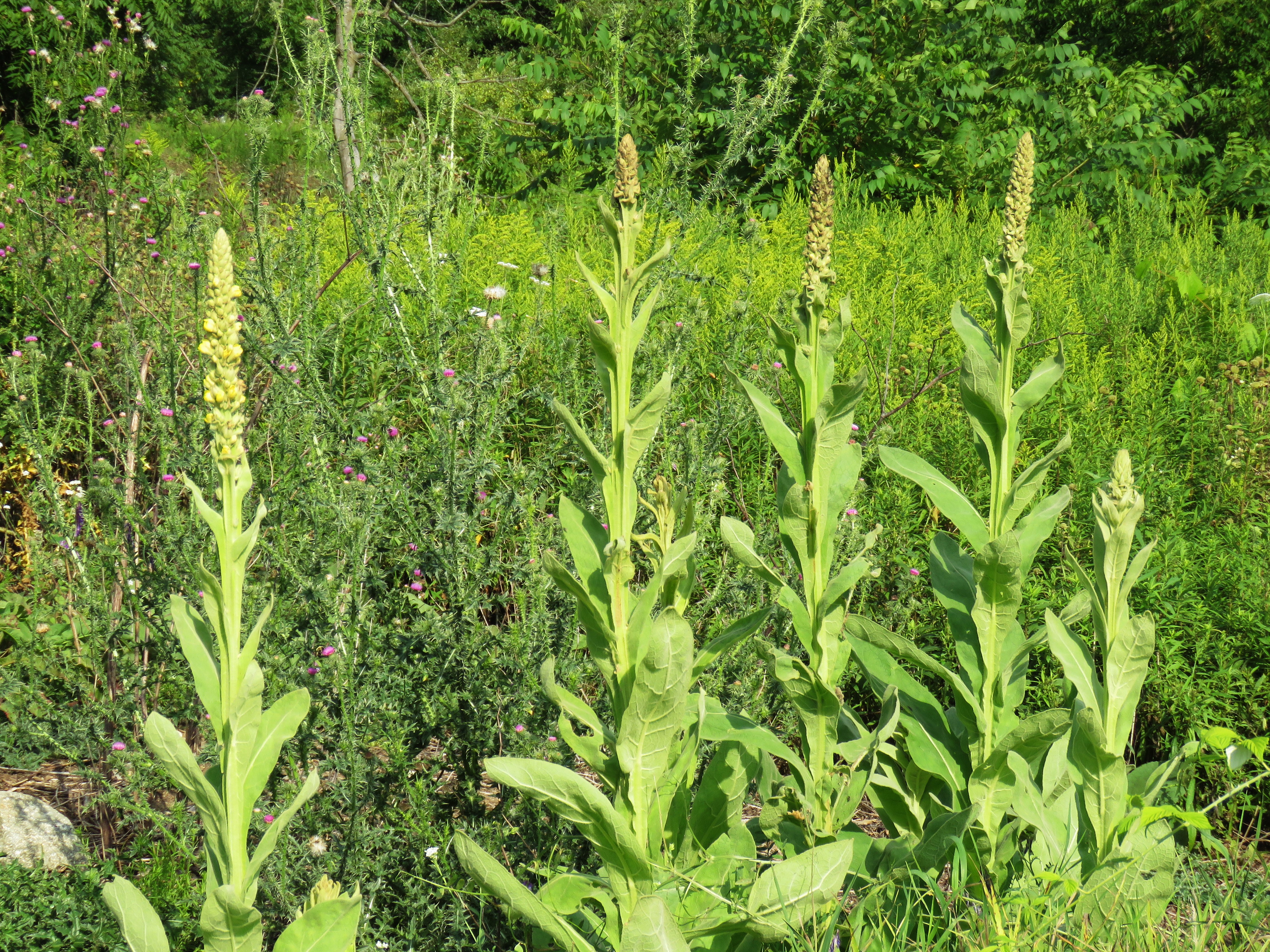 One thing is certain about Common Mullein; it has conquered our nation and is here to stay. The next time you hike a trail, take the time to admire this beautiful plant that thrives both in urban lots and in the fields of the wilder side of Oakland County.