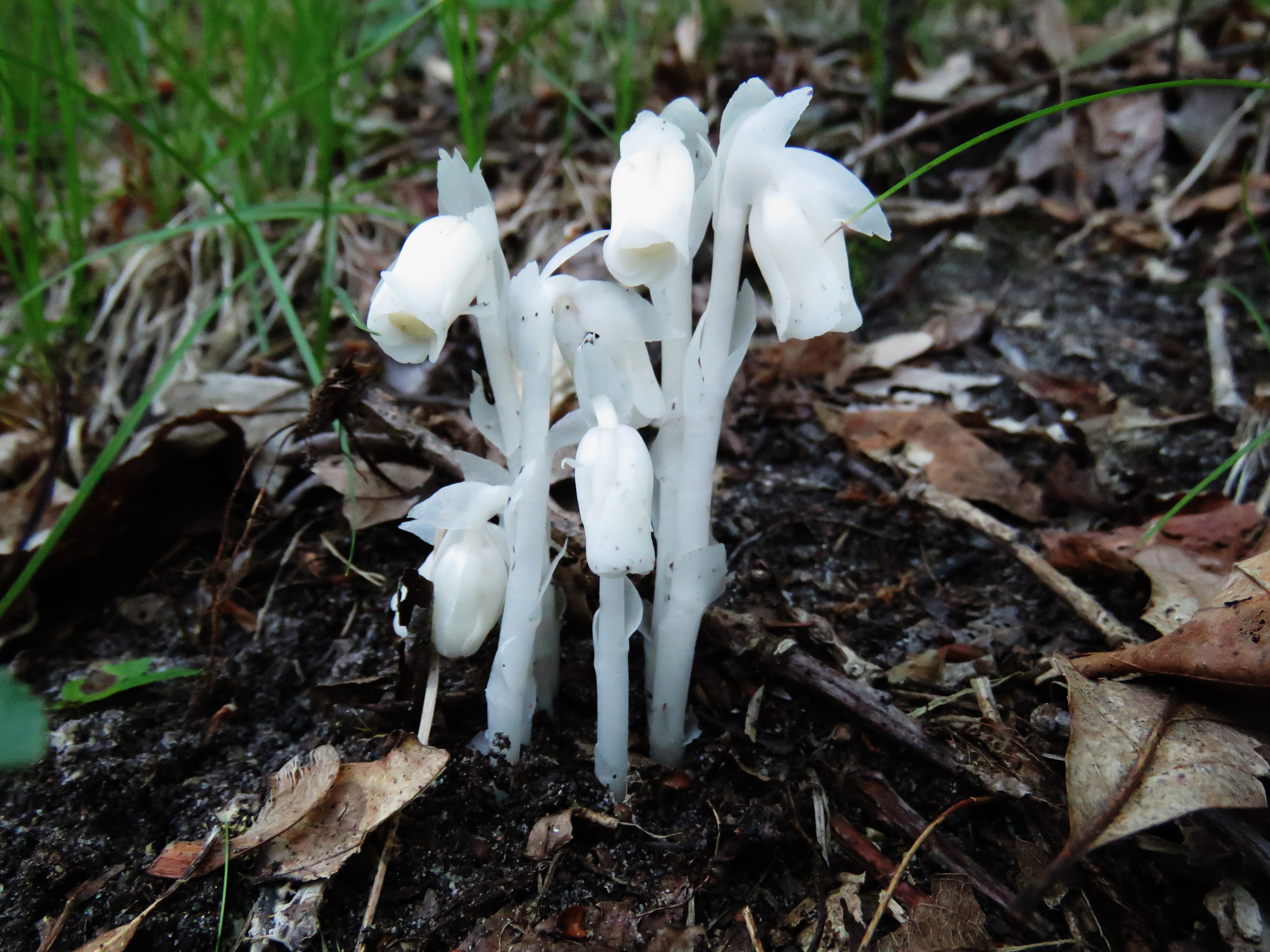 Indian Pipe (Monotopra uniflora) is emerging in the moist woodlands of the wilder side of Oakland County. Recently its growth has been accelerated by rains and warmth. Ghost Flower is another common name for this strange and beautiful plant that has a near total lack of pigmentation. Its ghostly, waxy white coloration leads some to call it the “Corpse Plant.” 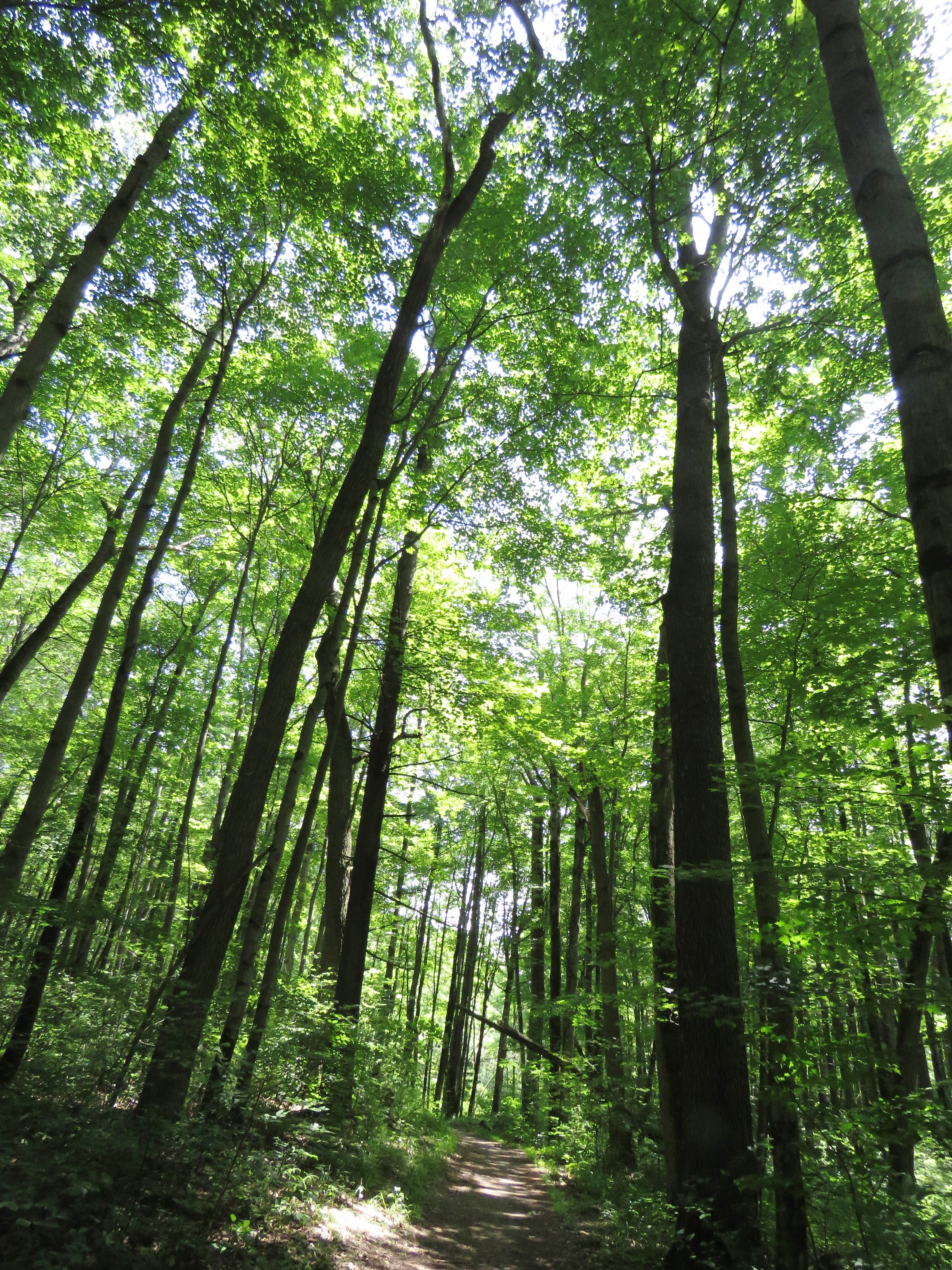 Indian Pipe rarely grows more than eight inches tall. It is hidden in shady areas of the woodlands, sometimes under an umbrella of ferns or even small oak saplings that are just inches tall. As a result, Indian Pipe is often overlooked by even astute nature lovers. Following a tip from another nature lover, I located a cluster just a few feet from a popular trail in the north unit of the Bald Mountain State Recreation Area. I might have missed it entirely if not for a bullfrog’s distraction. 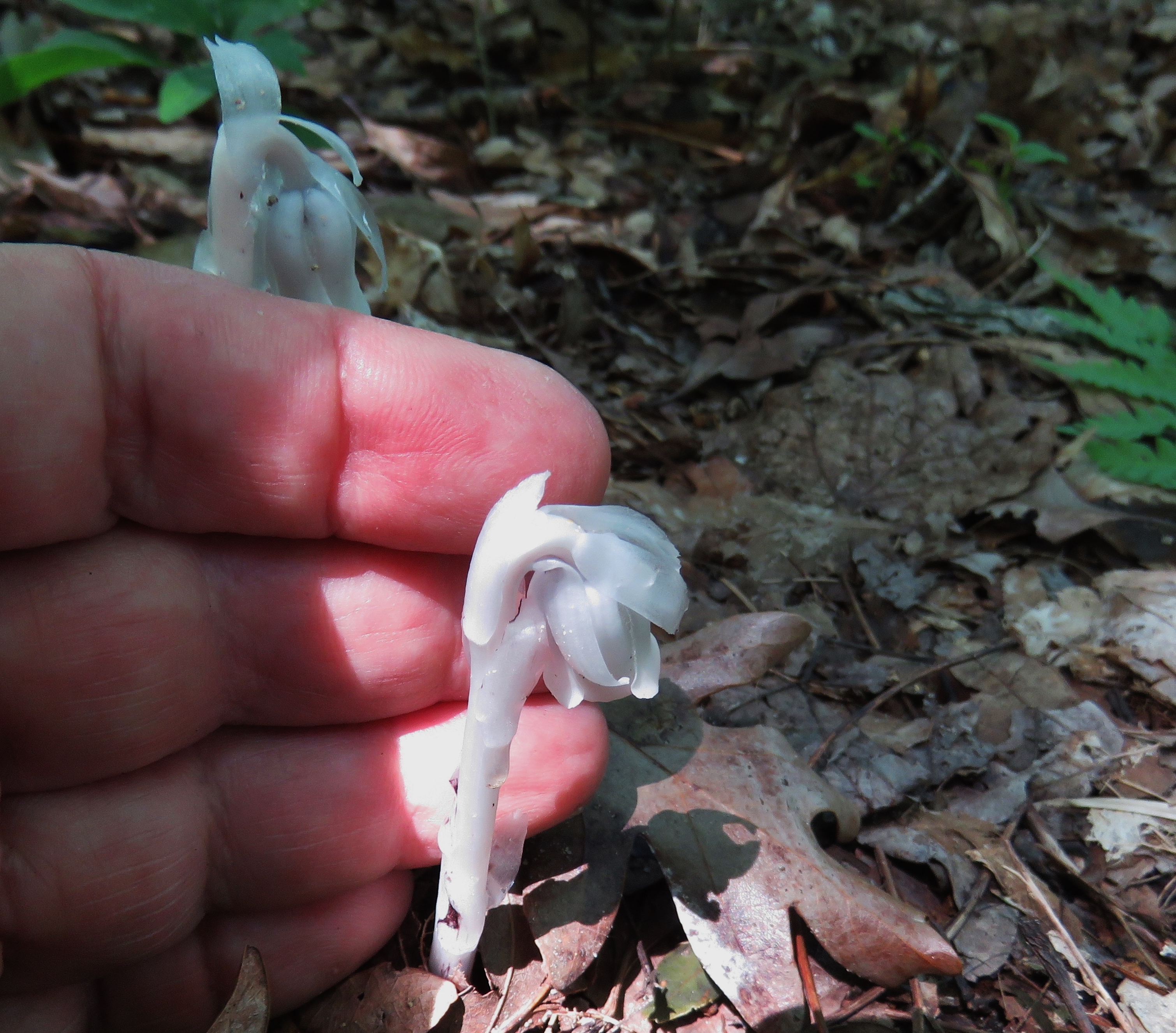 My five-mile hilly trail hike was brisk by design. I had stopped for a moment to listen to the deep baritone summer melody of an American Bullfrog hidden amidst a sea of duckweed at the edge of trailside marsh and to take a swig of iced tea stashed away in my day pack. That’s when I glanced down. There at my feet in the dappled sunlight was a colony of these intriguing plants that are not some type of mushroom as commonly believed.

For the next 30 minutes I crawled about the ground and struggled to capture images as occasional gusts of wind stirred tree leaves enough to allow sunlight to filter down to the forest floor and illuminate the plants. My shirt became muddy, an elbow was scraped, and mosquitoes found my neck, but all in all it was an excellent trade. I captured unobstructed images of the amazing Indian Pipe in its natural habitat: the object of my two-hour quest. 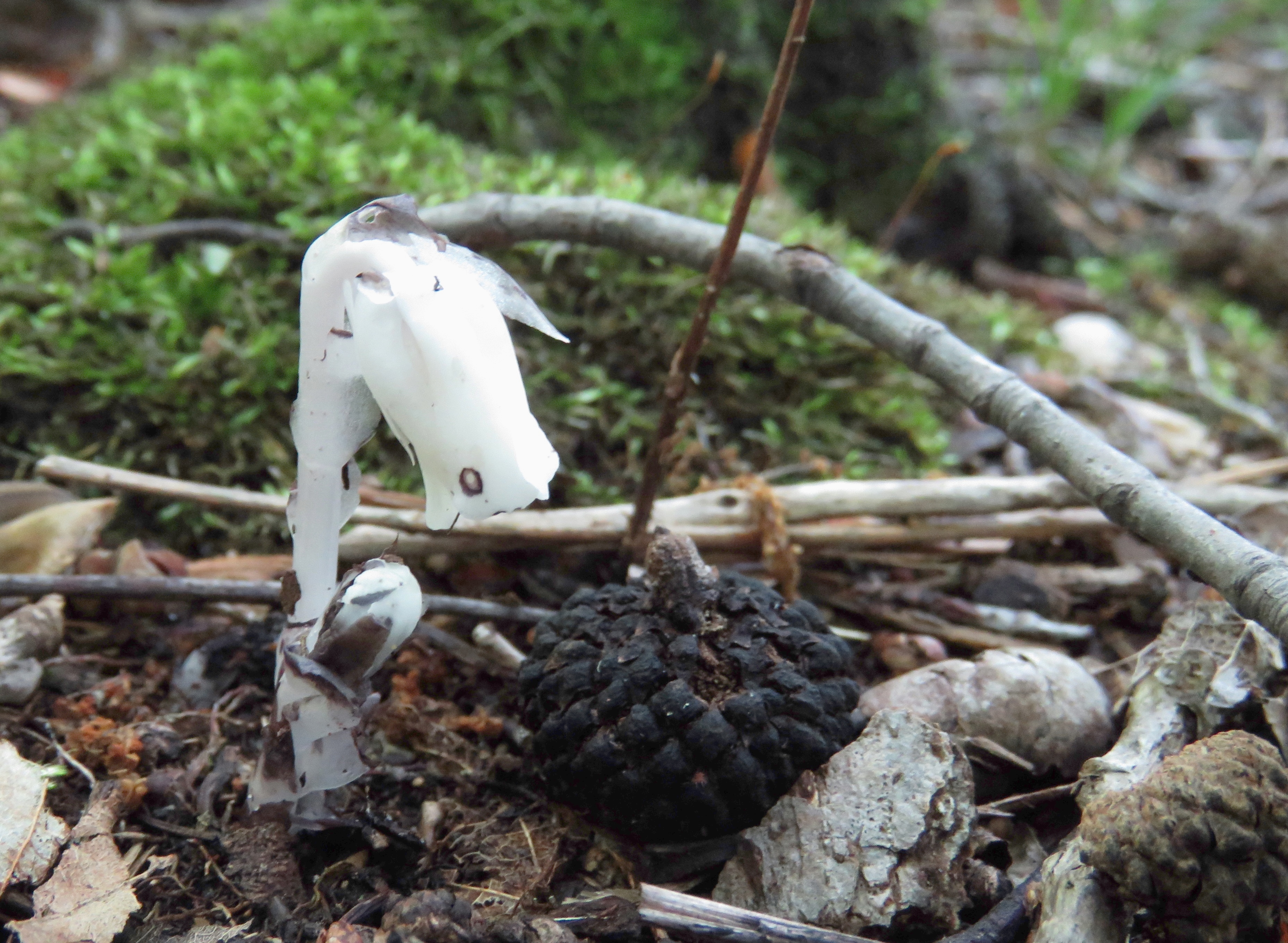 Getting the facts correct to explain the growth and peculiarities of this plant, often mistaken as some type of oddity fungus, took more effort than the photos. Indian Pipe is actually in the Ericaceae family which includes wild blueberries. I relied on the Mountain Lake Biological Station of the University of Virginia to explain how this plant survives and thrives without chlorophyll.

“Often mistaken for a fungus, Monotropa uniflora is sometimes called the ‘ghost plant’ in honor of its near-total lack of pigmentation. Without chlorophyll, Indian Pipe is one of around 3,000 species of non-photosynthetic flowering plants worldwide. Although many heterotrophic plants (those that lack the ability to synthesize energy independently) are parasitic on other plants, most are actually parasitic on fungi. Monotropa uniflora is one of these; it depends on fungi in mycorrhizal relationships with other plants for its nutrients. Mycorrhizal fungi typically carry on symbiotic relationships with host plants, exchanging nutrients in a way that benefits both organisms. However, when the fungi are being parasitized by plants like the Indian Pipe, they are forced to obtain additional carbon from the host tree and pass it along to the parasite tapping into their mycelium.” 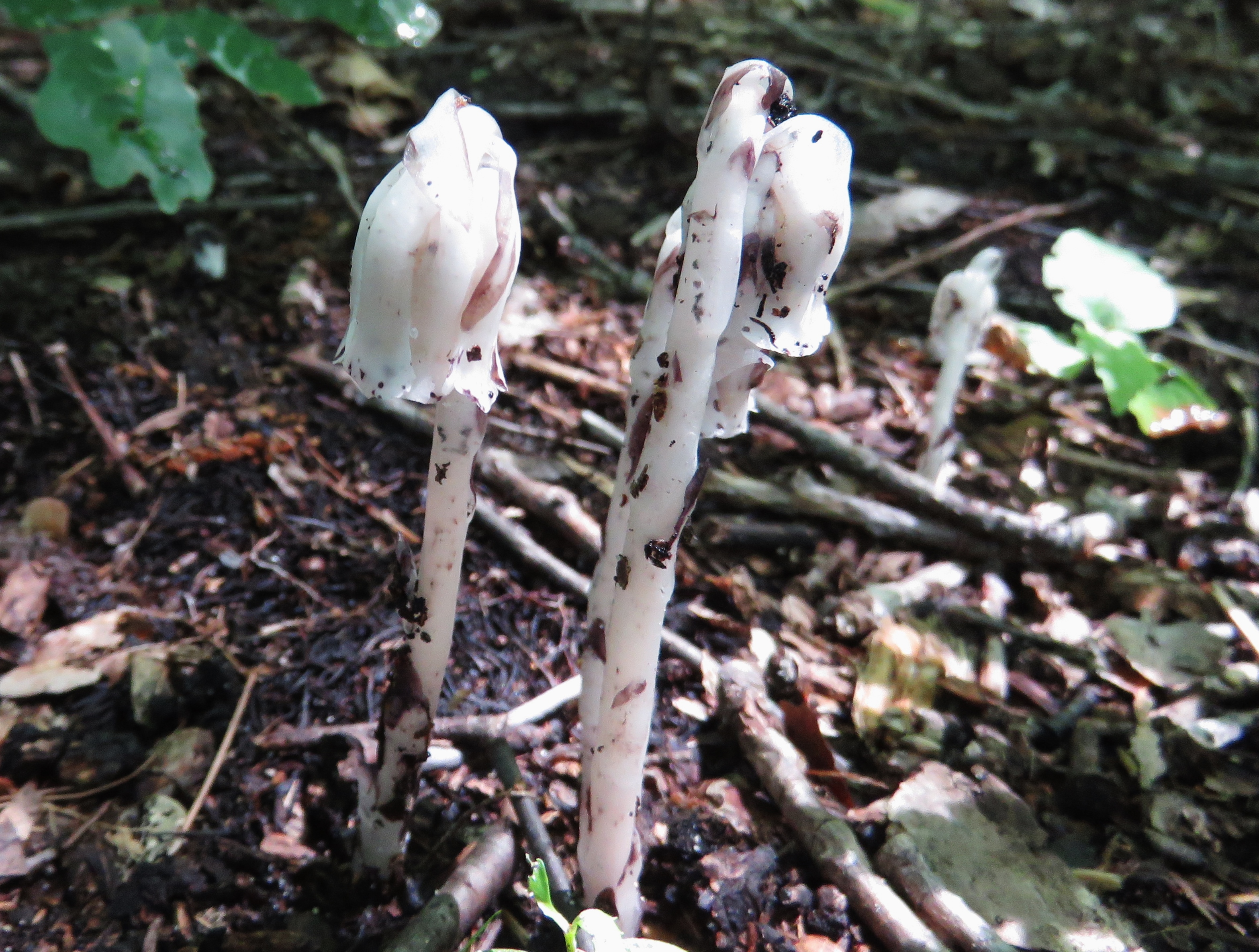 The name Indian Pipe, although perhaps politically incorrect, is the commonly used and acceptable name for this plant that thrives in the shadiest of forest places. The name perfectly describes the plant. The overall shape of the Indian Pipe before pollination occurs resembles a pipe emerging from the soil. It has a single stem that is 3 to 8 inches long and has no leaves. In the place of leaves, scaly bracts appear; some call them residual leaves. Sometimes moist soil clings to them after emergence adding contrast to the ghostly whiteness. At the end of the stem, a bell-shaped flower appears, unlike any other flower that one expects to see in a woodland or meadow during the sultry days of July. The flower may be white, or show a pinkish tint that looks brighter when illuminated by sunlight. 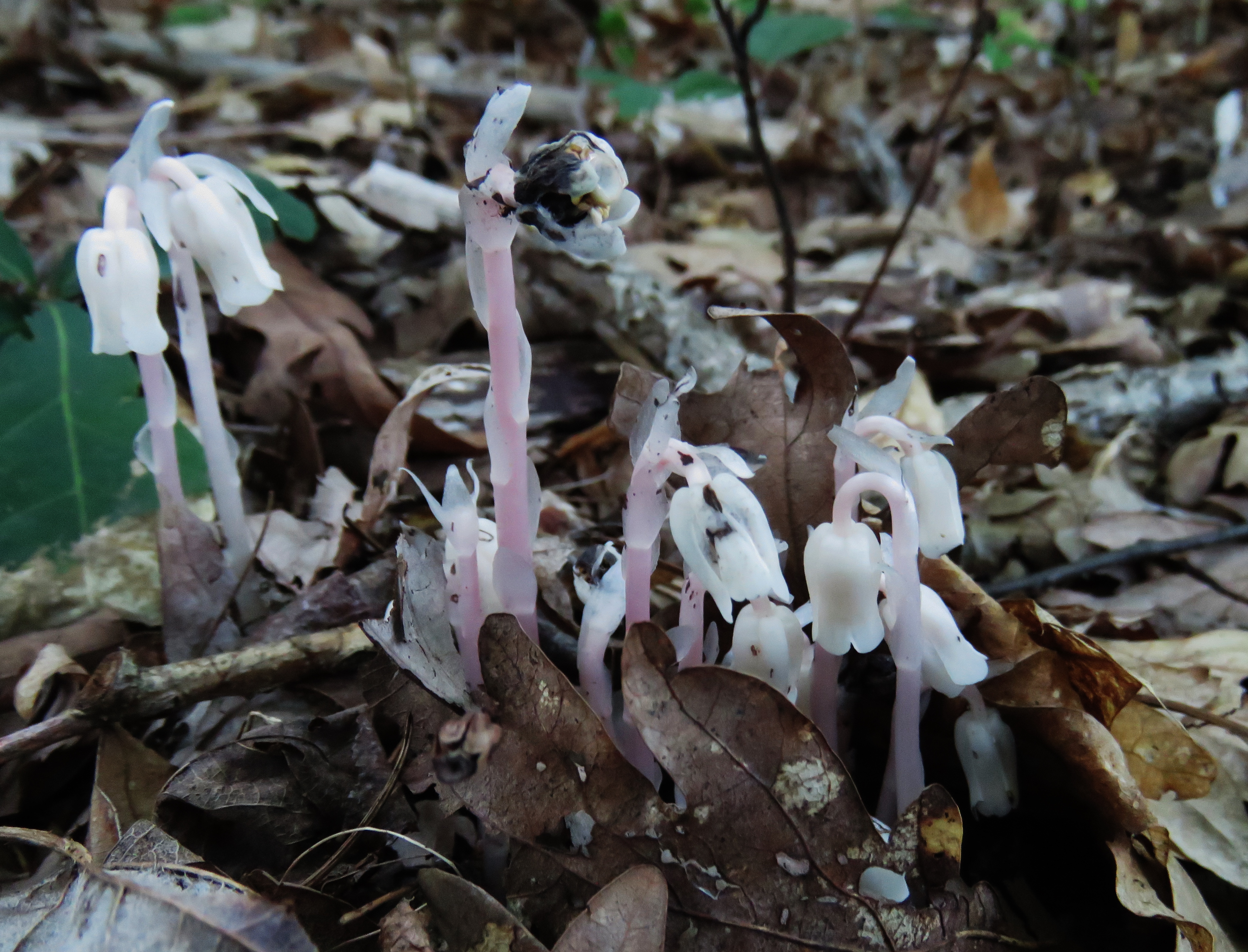 After pollination by bees or other nectar seeking insects, the flower begins to stand upright instead of nodding downwards, and a seed capsule forms. After the tiny seeds mature, they are dispersed through the forest by wind. If one comes to rest in an ideal location it may germinate. Ideal locations are few and far between, but Oakland County has isolated pockets of perfect habitat.

Shortly after the seeds are released to the winds, the stem starts to darken and then quickly withers away, but the roots of the plant remains healthy underground gaining energy and nutrients from decaying matter.

I take issue with some “facts” I found on various websites while doing my fact-checking, including one blogger stating the plant is scentless. I knelt and sniffed my discoveries before I knew they were supposed to scentless and would say the plant has a distinct semi-sweet scent, perhaps best described as the scent of Monotropa uniflora. I believe the insects that pollinate them agree with me. Another site stated the plant tastes like asparagus. My advice: Don’t try tasting them. Yet another writer boldly proclaims it glows in the dark, “-because it is not dependent on light for photosynthesis.” I suspect that statement is inaccurate but a return trek at night will answer that question for me. I would like to be wrong and find a ghostly white plant glowing in the moon shadows. 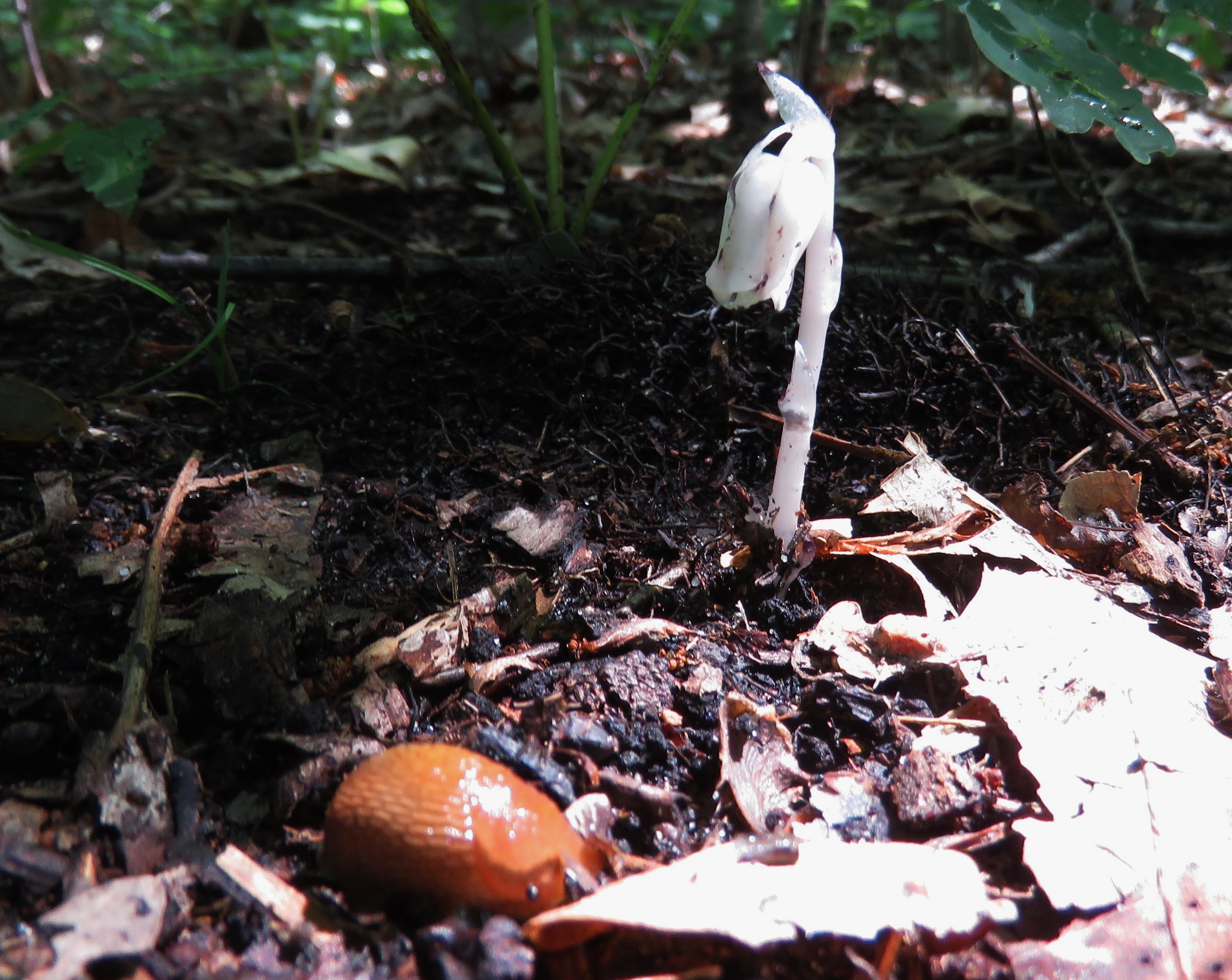 I’m not about to share the exact location of the patch of Indian Pipes I found, but these next few weeks are a perfect time to search for Indian Pipes in our shaded woodlands. They are habitat specialists, meaning the habitats they grow in require specific conditions. Direct sunlight, soil dryness or sterility of the soil will prevent any chance for the plant to carry on its unusual lifestyle, for to thrive it must gain nutrients and energy from moist soil rich with decaying matter. Most of the Indian Pipes I saw last week, or in previous years, have been near decaying logs, often under a thick canopy of mixed age oak trees. Many of the ones I found this year were near patches of moss adjacent to decaying logs and slow crawling slugs, both indicators of proper habitat conditions. They were all within view of trails. A reminder to walk slowly, stop often and look low. One fine specimen had a dew-speckled spider web as its extra shade umbrella. Shade and moisture are a must for survival, and trampled soil prevents any chance for growth. 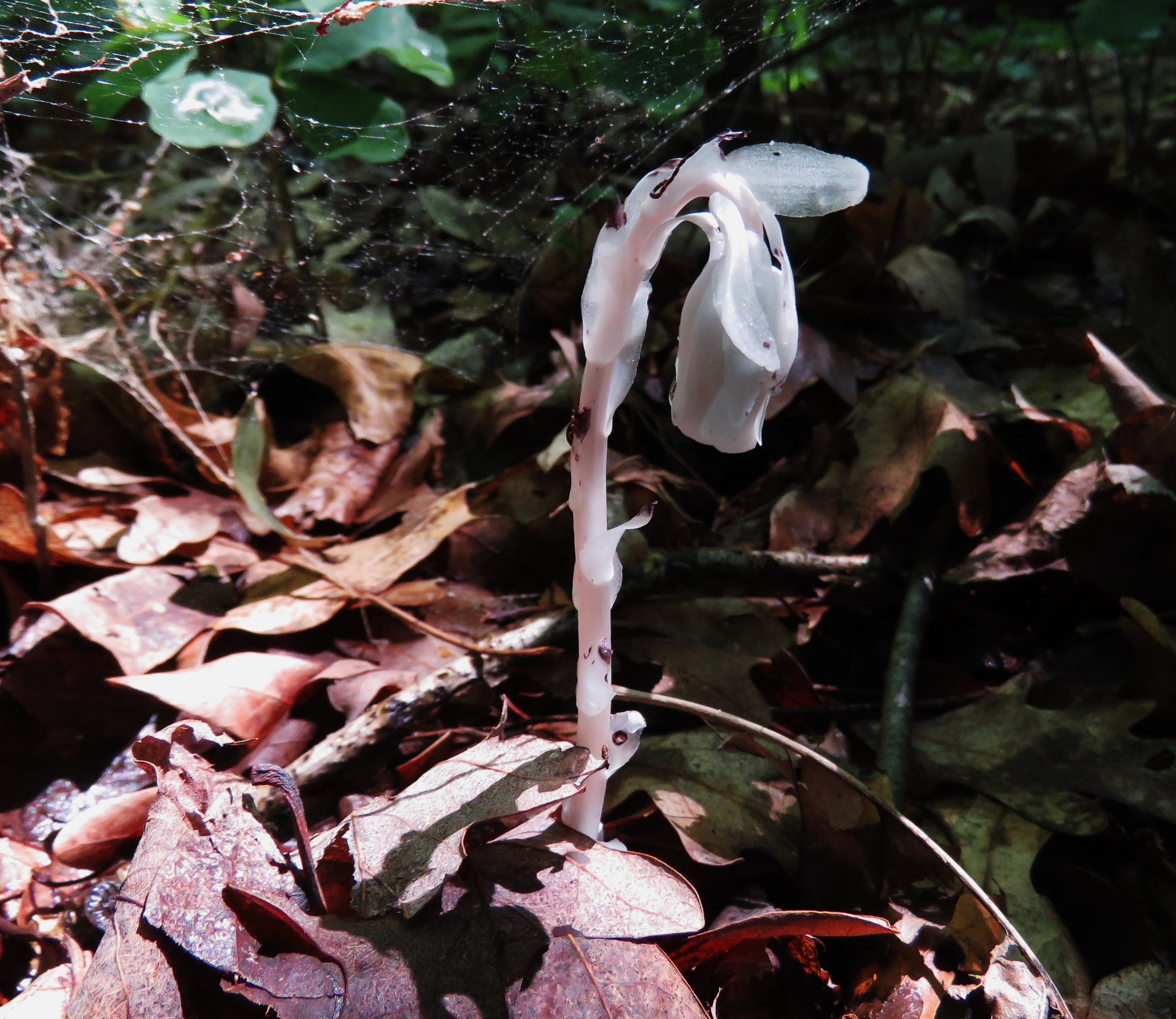 Start your search in any rich deciduous woods with abundant organic matter and focus on deeply shaded areas and you just may discover one of the most beautiful wonders of nature. If you are so lucky, just leave them be. They cannot be transplanted and if picked they wither away quickly. Take your photo, and hike on with fond memories of our delicate, seldom seen, ghost flowers. 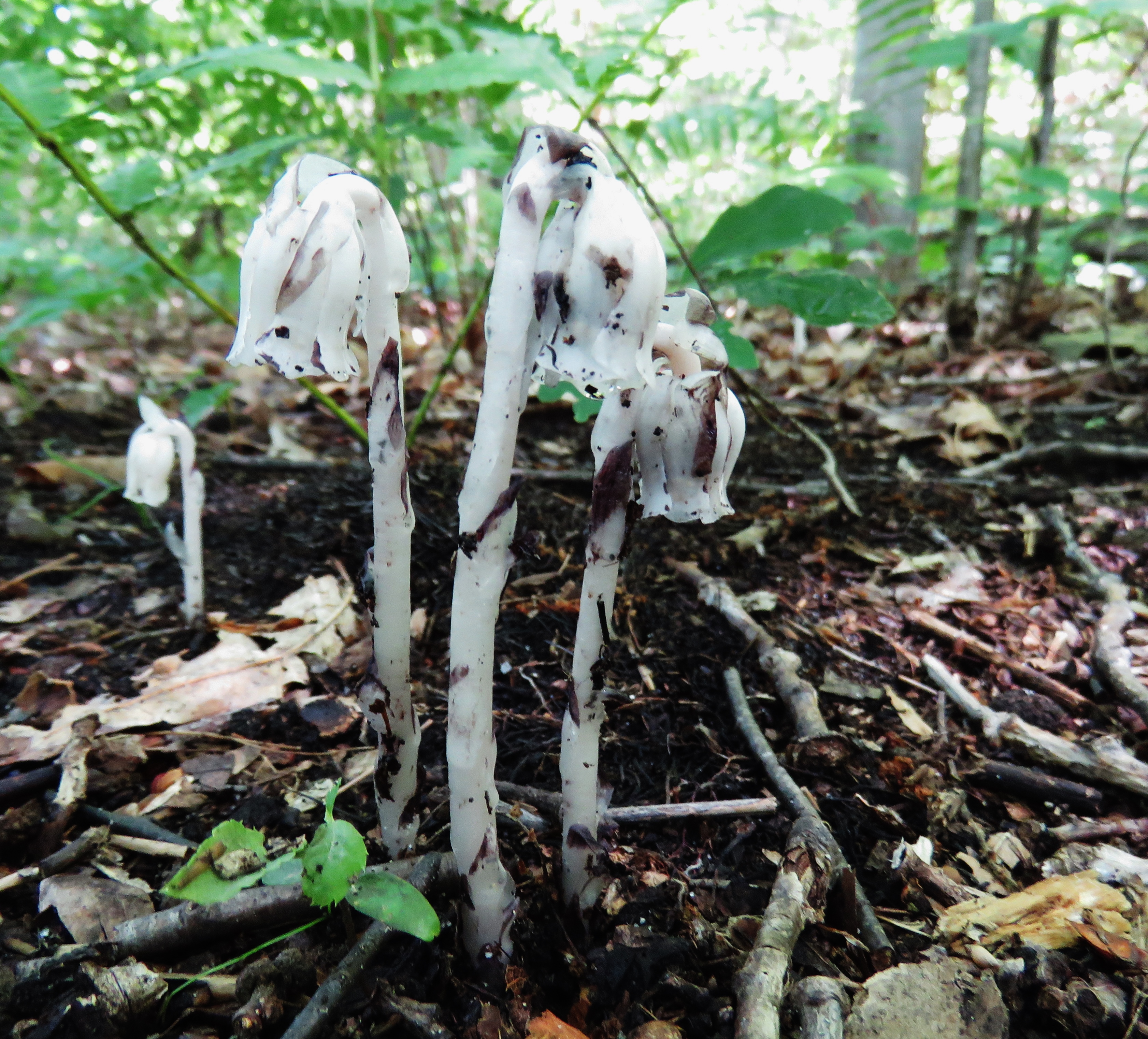 9 thoughts on “The Ghost Flower of Oakland County”