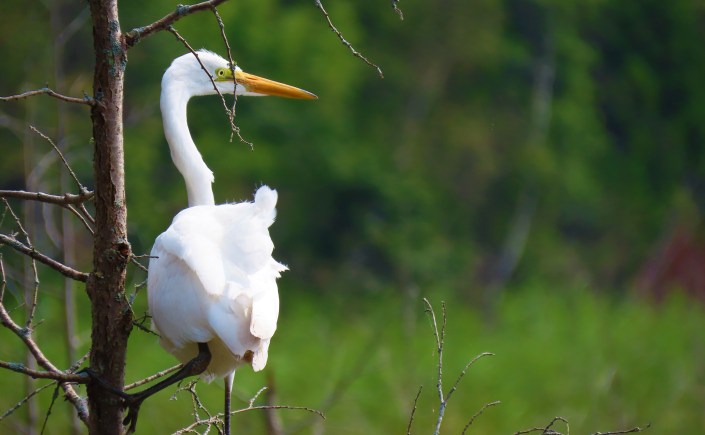 I am a nemophilist. That’s someone who is fond of forests; a haunter of the woods. I celebrate woodlands in all seasons, but especially look forward to the spectacular forest colors of autumn, frosted pumpkins, and adventuresome hikes as nature’s last hurrah before winter arrives. Today, however, as the end of August draws near, I’m sharing nature’s subtle signals that summer is slowly fading. Increased sightings of Great Egrets, dazzling beauties of our healthy wooded wetlands, are one of nature’s first signs that summer is fading.

In the late nineteenth century, Great Egrets were hunted nearly to extinction for their plumes, sparking a conservation movement that led to the formation of the National Audubon Society. Over the last few decades, Great Egrets have expanded their breeding range from southern states into Oakland County where they find abundant prey in our shallow, glacially sculpted lakes and wetlands. Now, as summer wanes, they are often noted perched on branches close to the water where they wait to seize a frog or fish with their yellow bill. Most egrets will start their journey south before the peak of the color change, and all will leave before ice forms.

Something is missing at my hummingbird feeders. The adult males, the ones with the brilliant, ruby-colored throats are gone! Their absence is a definitive sign that summer is fading. Here’s why: Adult males are the first to leave Oakland County and my observations tell me they are already on their southern migration journey. Adult females wing southward afterward, followed by the juveniles.

So with the adult males gone, why are we seeing more hummingbirds at our feeders? We are mostly seeing adult-size juveniles that hatched in Oakland County, some of whom may be male, but do not develop their red-colored throat feathers until their first winter. It’s believed that by males leaving earlier, there is less competition with the females and immature birds for diminishing nectar supplies during migration, an arduous journey, especially for those that fly across the Gulf of Mexico to reach Central America. Visit Journey North’s website for fall migration info and a tracking map.

Spotted jewelweed is blooming, as it always does near the end of summer. It usually appears along the edges of wetlands and sun-dappled stream banks and attracts more than the human eye. Departing Ruby-throated Hummingbirds fuel up on its nectar before heading south. Spotted jewelweed also has an “explosive” secret that leads to its other common name, Touch-me-not. When the inch-long seed pods are bumped into by wildlife or touched by a curious human, they open with a pop that hurls their three to five seeds up to six feet away from the plant.

The annual appearance of fall webworms is right on schedule, much to the chagrin of some homeowners. Their larval stage skeletonizes and consumes leaves inside the protection of a tent-like web that enlarges as they require additional food for growth. Before summer ends, some of these webs might cover an entire branch and be over three feet long, and multiple webs may cover much of some trees. I’ve been watching the rapid growth of a web on one of my black walnut trees, a favorite food source for these creatures. I discovered that the web can be clearly seen if I photograph them with the sun to my back. However, I prefer to shoot into the sun and capture images of the creatures crawling within. Don’t confuse fall webworms with tent caterpillars, another leaf consumer. Tent caterpillars emerge in spring and feed outside of the “tent,” mostly on black cherry trees. To learn more about fall webworms, visit Michigan State University Extension’s website.

Fall fungi, fueled by seasonal warmth and damp weather, are fantastic finds. Two mushroom species of late summer are emerging right on schedule as August wanes. The bright-orange coloration of Chicken of the Woods is eye-catching, and for those that know their mushrooms well, signals another prized palate-pleasing find. Note: There are similar-appearing species that are toxic so never consume any wild mushroom unless you are one hundred percent certain of your identification. The odd-looking, but rather beautiful and aptly named, Golden Coral Fungi is also emerging in the moist habitat of our woodlands, right on schedule.

Eastern massasauga rattlesnakes are the only venomous snake in Michigan and are very much at home in Oakland County. As summer wanes and the air cools, they sometimes slither onto sun-warmed warm surfaces to bask on a cool September day. The one pictured below did just that about six years ago at Indian Springs Metropark on their paved hike-bike trail. My photo capture clearly shows the rattle and heat-sensitive pit, two characteristics of our reclusive “swamp rattler.” Like all pit vipers, massasauga rattlesnakes have heat-sensitive pits located on each side of the head, between the nostril and eye. These special sensors enable them to hone in on endothermic prey, “warm-blooded” animals that produce heat, such as mice and meadow voles. A few years after that exciting encounter, I photographed another massasauga alongside a paved trail at Independence Oaks County Park, another park that offers good rattlesnake habitat. In both cases, the rattlesnakes remained motionless and non-aggressive. Live and let live is the way to go, and it’s also the law when it comes to these legally-protected reptiles that are most often seen in September as summer fades.

Little kids love them. So do I. Almost every year at the end of August, milkweed bugs appear in clusters on the still closed pods of milkweed plants. Their predictable appearance is about as reliable as flipping the pages of a calendar, and if insects were the calendar icons, they would go on the last week of August. In another month, milkweed pods will open, releasing their seeds to drift in the wind carried by silky parachutes, another sign of summer’s waning days.

Late August to early September is prime time for these sweet, juicy, finger-staining fruits that are delicious right off of their thorny bramble bushes. Competition was fierce for blackberries the past few weeks at my favorite foraging location in a park managed by Oakland County Parks. Birds and more than a few nature-savvy humans know that location well. I may head back in a few days with long pants for thorn protection and enter the center of the thicket for one more end-of-August haul. It’s a bittersweet moment, for the end of their harvest signals summer is waning.

Autumn olive is an invasive, but tasty and nutritious treat. Its prolific presence all but screams, “Summer will fade!” Their berries are now approaching their peak, and I make a habit of watching for them when meandering about sunny fields, their favorite habitat. I’m not the only trail-trekking creature that seeks them out. Raccoons and opossum share my passion and I’ve witnessed wild turkey flocks under their branches half flying, half leaping upwards to reach their fruits.

“What are your favorite trails?” is a question I often receive as autumn looms over the horizon. There are many, each with their own attractiveness for those that seek adventure or just a quiet walk in the woods after the leaves reach full color.

I often hike the hilly trails of Bald Mountain Recreation Area with my hiking partner companion, another confirmed nemophilist. You can’t go wrong with easily-accessible Independence Oaks County Park. It has flat paved trails, natural surface trails, and miles of well-marked hilly trails. A modern bathroom is near their boathouse, the gateway for many to circumnavigate Crooked Lake or launch a kayak. I could spend a day ranting about the trail wonders of Rose Oaks County Park, Seven Lakes State Park, Indian Springs Metropark, or Stony Creek Metropark, but I have a better idea. Find any trail or woodland path, be it a local government trail, or one managed by Six Rivers Land Conservancy, the Michigan Nature Association, or North Oakland Headwaters Land Conservancy. Don’t forget the Paint Creek, Polly Ann, West Bloomfield, and Clinton River trails. Get those hiking shoes on, bring water and snacks, and then walk slowly, stop often, look and listen, and you too will discover what nature is saying.

2 thoughts on “What Nature is Saying!”