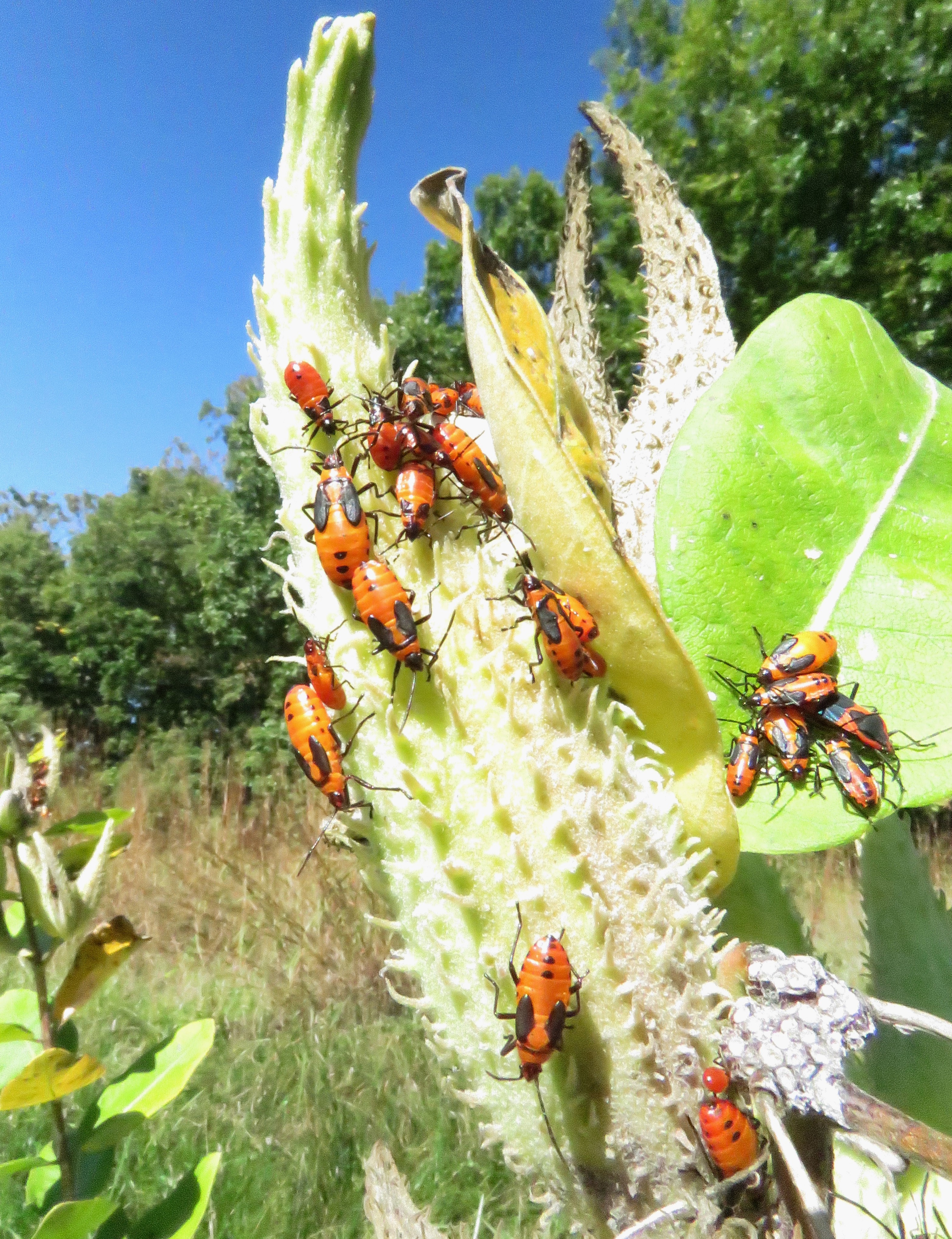 October is the season of the Large Milkweed Bug (Oncopeltus fasciatus), a colorful but lesser known bug of Oakland County’s milkweed-rich meadows, fields and trailsides. They are spectacularly beautiful creatures that lure the attention of nature hungry little kids, nature savvy adults and university entomologists. However unless one walks slowly amidst the milkweed plants, and looks for them, they often go unnoticed, even with their brilliant colors. Don’t let them go unnoticed. 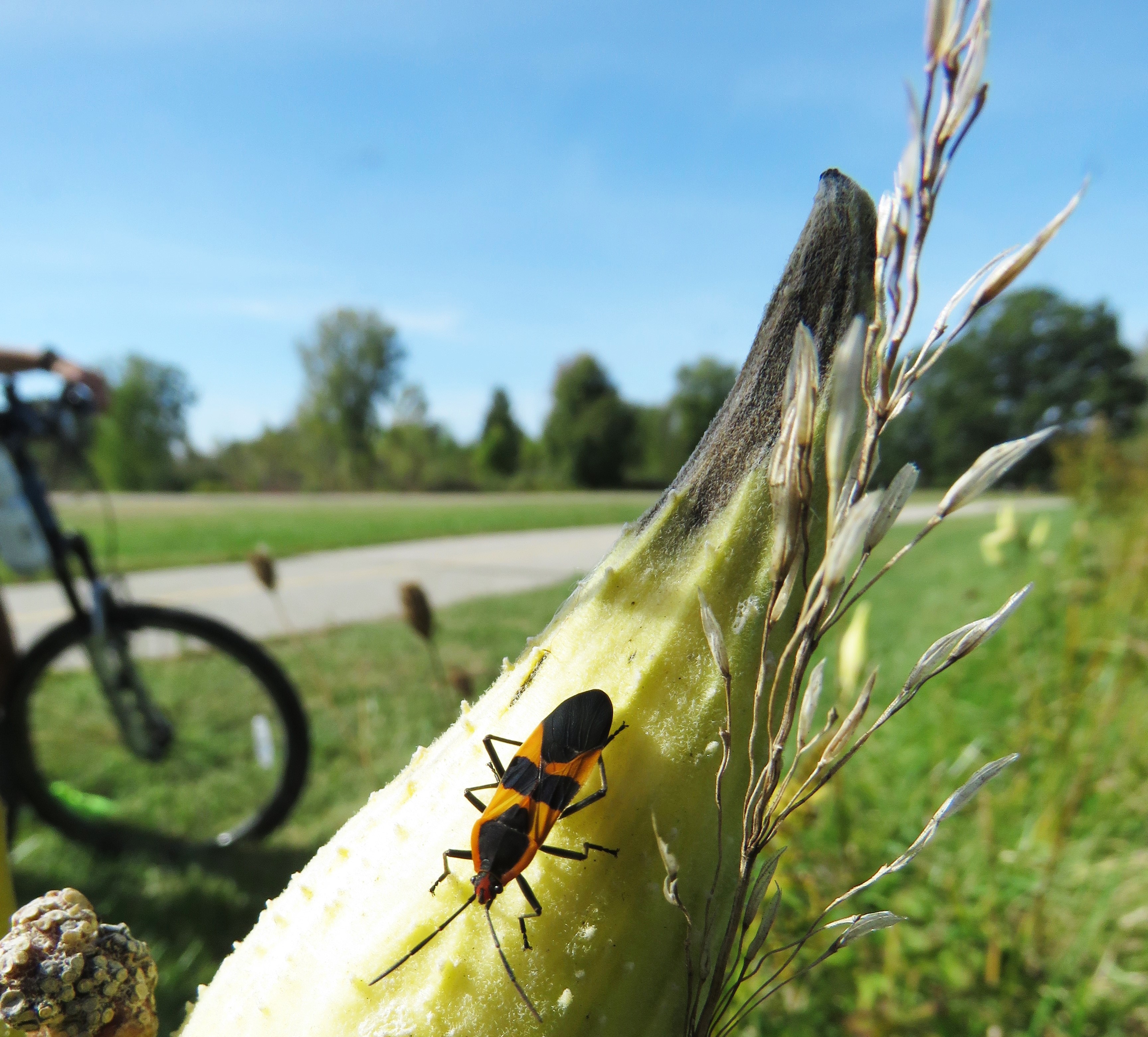 Large Milkweed Bugs, like the Monarch Butterflies, depend on milkweed plants for their life cycle, enforcing the fact that milkweed plants are more than a weed, and in the world of nature all things are connected. The milkweed plant provides all the nourishment the monarch needs to transform from a Monarch caterpillar into an adult butterfly. In a similar way, without milkweeds, milkweed bugs could not survive. Also like monarchs, their bold orange and black color patterns serve as a warning of their toxicity. 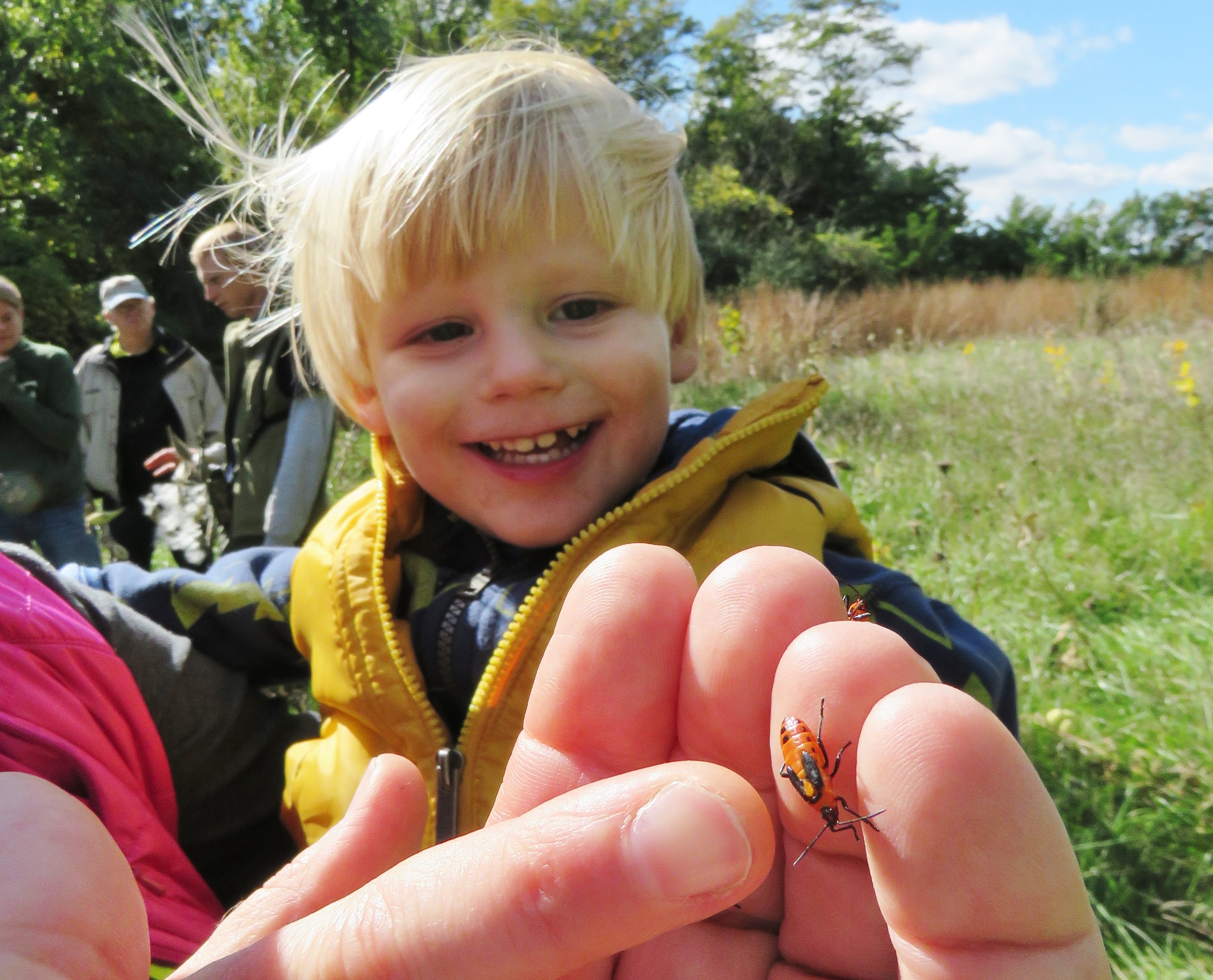 Last autumn I encountered hundreds of these bugs on a sunny day in the restored prairie of the Lost Lake Nature Preserve, a 538-acre sanctuary managed by the Southeast Michigan Land Conservancy. The preserve spans the Oakland County-Genesee County line, a reminder that in the world of nature, birds and bugs and all things wild, know no borders. At the time of that hike, then two-year-old Ethan shared my exuberance as we explored the secret world of milkweed, monarchs and the Large Milkweed Bug. In the past few weeks I have noted Large Milkweed Bugs clustered on milkweeds on the sunny trailsides of Stony Creek Metropark, at Independence Oaks County Park-North, and in the meadows of Highland Oaks County Park. 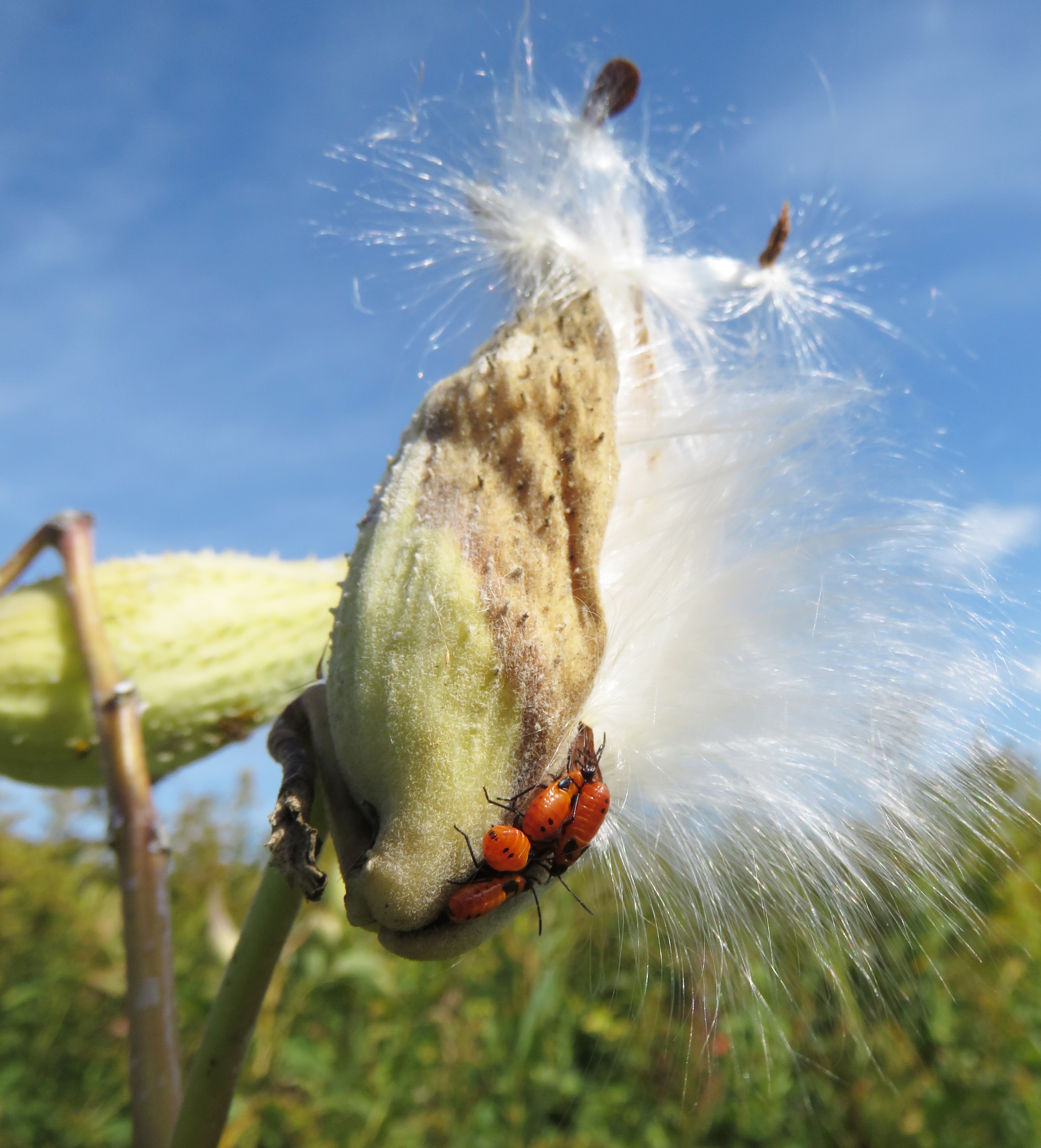 With Halloween fast approaching, perhaps it’s time to rename them to something more colorful and eye-catching than “Large Milkweed Bug”, a rather lame “ho-hum” common name that just does not seem fitting. How about calling them Halloween’s Colorful Cluster Bugs? Their patterned colors of brilliant reddish-orange and black enhance the seasonal mood and they appear in clusters on milkweed pods the same time pumpkins brighten fields. My Halloween thoughts are shared in part by Professor Michael Raupp of the Department of Entomology at the University of Maryland. He is the highly creative author of a popular insect blog enriched with lively videos. His weekly blog, Bug of The Week blends science facts with delightful splashes of humor. He wrote about the Large Milkweed bug rather eloquently in October of 2014. Here’s part of what he wrote.

“The origins of Halloween began in the time of ancient Celts when summer ended and the time of harvest gave way to approaching winter. The start of the Celtic New Year on November 1 was a scary time, as spirits of the dead returned to earth on the eve of October 31 to visit family and engage in frightening tricks. Orange and black became the colors of Halloween, orange representing the color of harvest and later the Jack O’ lantern, and black symbolizing the color of death. How fitting it is that we visit four beautiful but potentially deadly insects that dress in orange and black to send a warning to would-be predators, “Eat me at the peril of death.” 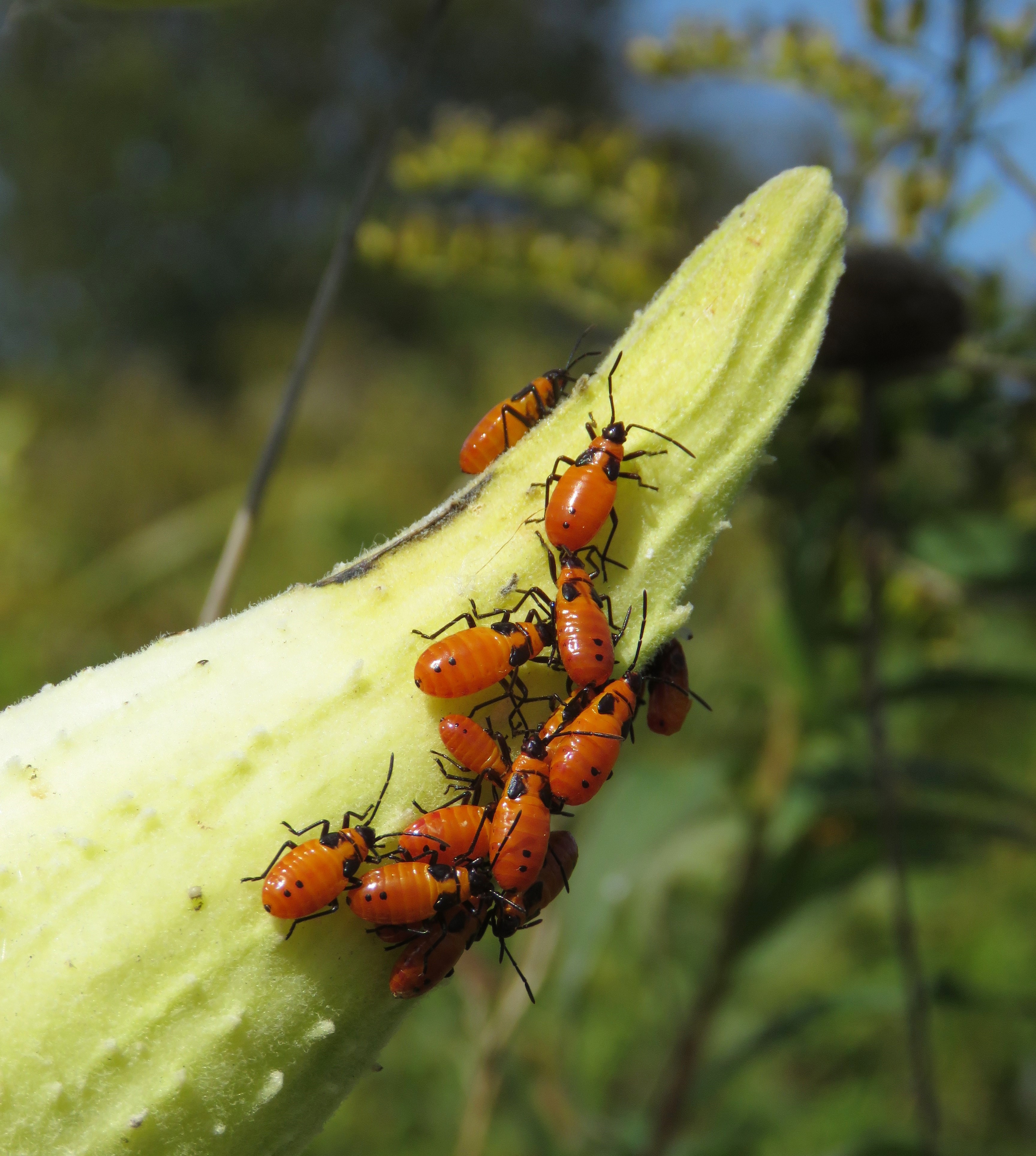 One of the four insects he references is the Common Milkweed Bug, but don’t let Raupp’s “peril of death” comment deter you from searching for and even handling these misunderstood beauties. Just don’t eat them! Their bodies accumulated toxic compounds derived from the sap they suck from milkweed. Assistant Professor Joe Boggs, of the Ohio State University Extension Service,  explains the evolution of their protective coloration strategy this way,

“Like other milkweed-herbivorous insects such as monarchs (Danaus plexippus), the bugs seek protection from predators by accumulating in their flesh the alkaloid toxins, called cardiac glycosides (cardenolides), which are concentrated in the milkweed’s sap. It’s an interesting twist on the aphorism “you are what you eat.” Research has shown that predators that dine on insects protected by cardenolide glycosides suffer a range of malevolent maladies including death.  Nature teaches tough lessons. 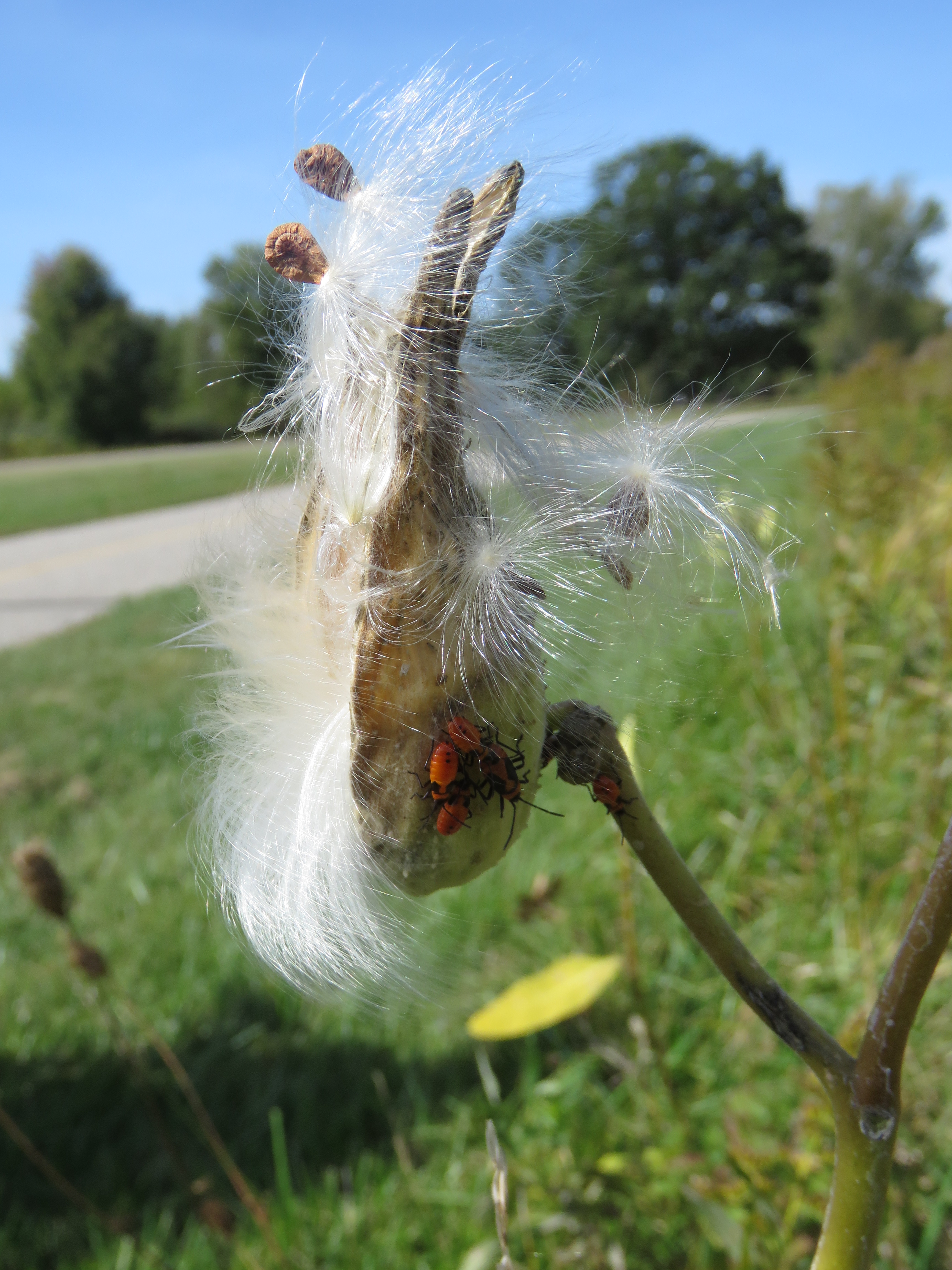 The bug’s coloration pattern prominently advertises their toxic nature and warns off predators; most insect-eating birds shy away from these colorful crawling tidbits. That evolutionary trick is known as “aposematic coloration.” In non-scientific terms the conspicuously recognizable markings of an animal serve to warn potential predators that eating them might be really bad idea. The bold patterns of skunks, the bright orange-black colors of monarch butterflies and milkweed bugs are all classic examples of warning coloration known as aposematic coloration. 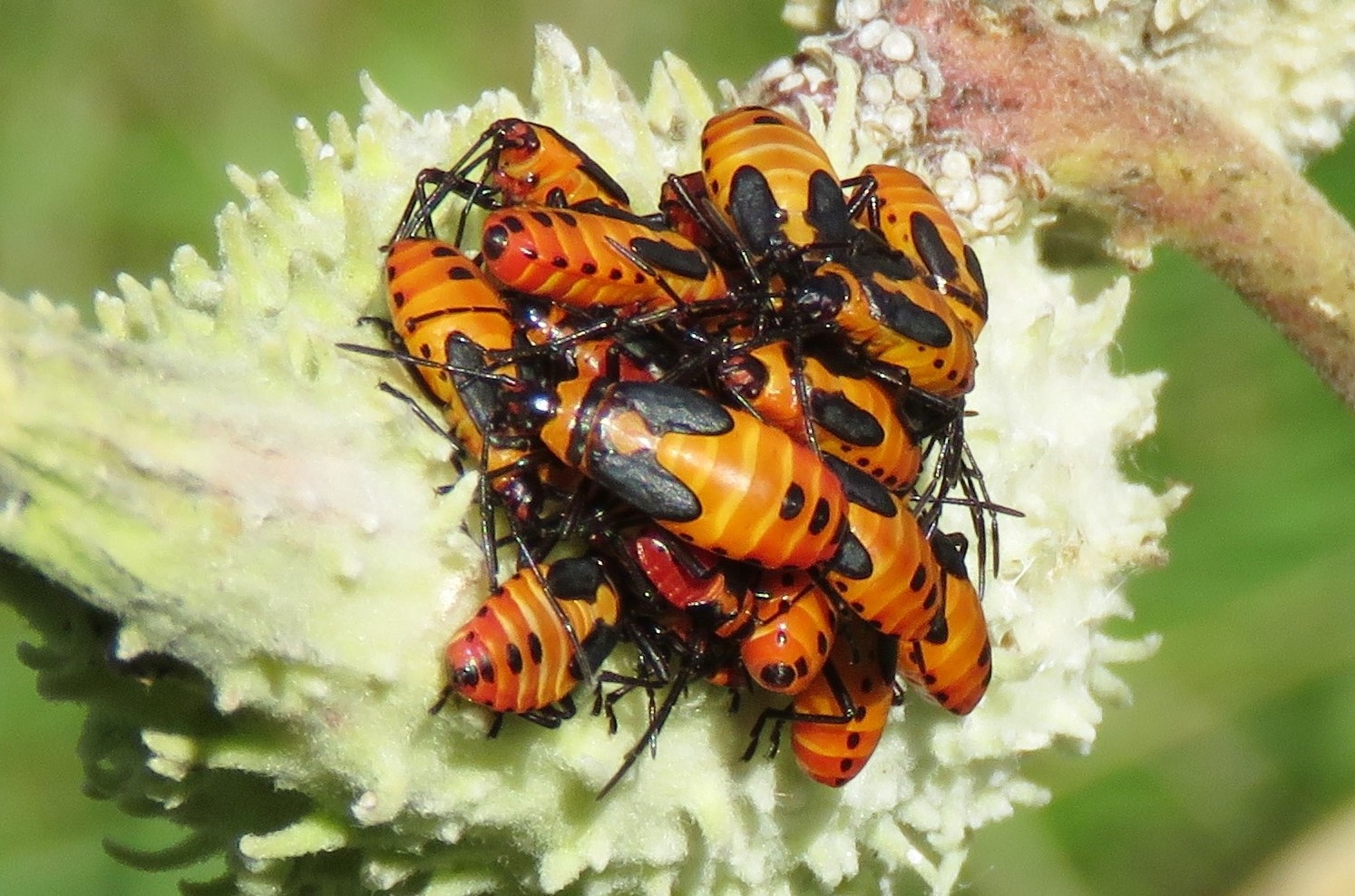 They cluster together in sunlight during cool October days making observation of their stages of growth easy. The milkweed bug undergoes what entomologist refer to as incomplete metamorphosis. The eggs come first, then the nymphs, and there may be lots of nymphs on a single milkweed pod for females are prolific egg layers. The tiny nymphs look like adults, but have not yet developed their full wings and must go through five instars, or stages of development before reaching adulthood.

Here’s a “Wilder Side” crash course of Entomology 101 to explain instars in relation to Milkweed Bugs: Milkweed bugs go through stages as they mature. Each molt or shedding of their exoskeleton produces a larger nymph. As their growth continues they develop more fully, and wings begin to develop on the backs of the bugs first appearing as black spots. This process of molting is carried out five times until the tiny nymph becomes a fully mature winged adult. 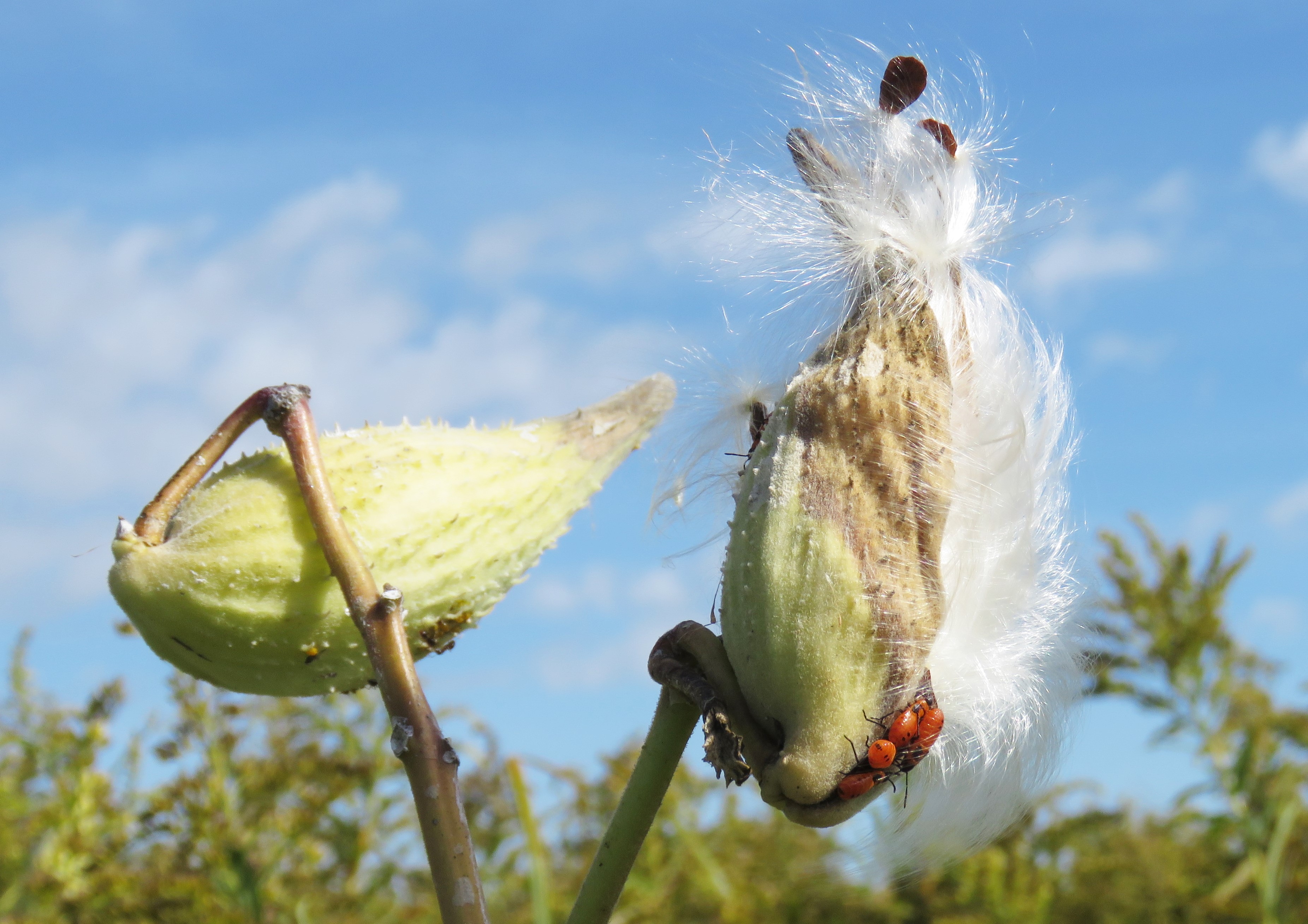 A close look at the nymphs to view the beginning of the wings growth is easy to do. Just walk up and look but try to avoid casting a shadow or they may re-position themselves. They are clearly noticeable in some of the photos, just behind the head. You won’t see much action by watching the bugs, but they have a slender straw-like beak that is inserted into the ripened seeds located within the developing pod. After they inject digestive enzymes into the seed, they suck liquefied milkweed into their gut.

“Most people don’t realize that large milkweed bugs, like monarch butterflies, undergo annual migrations throughout much of the range of milkweeds, from southern states and Mexico where they spend the winter, to northern states and southern Canada where they spend the summer. Large milkweed bugs cannot survive winter’s chill in northern climes. Their annual migration south is triggered by shortening day length, cooling temperatures, and declining quality of milkweed plants as food.” 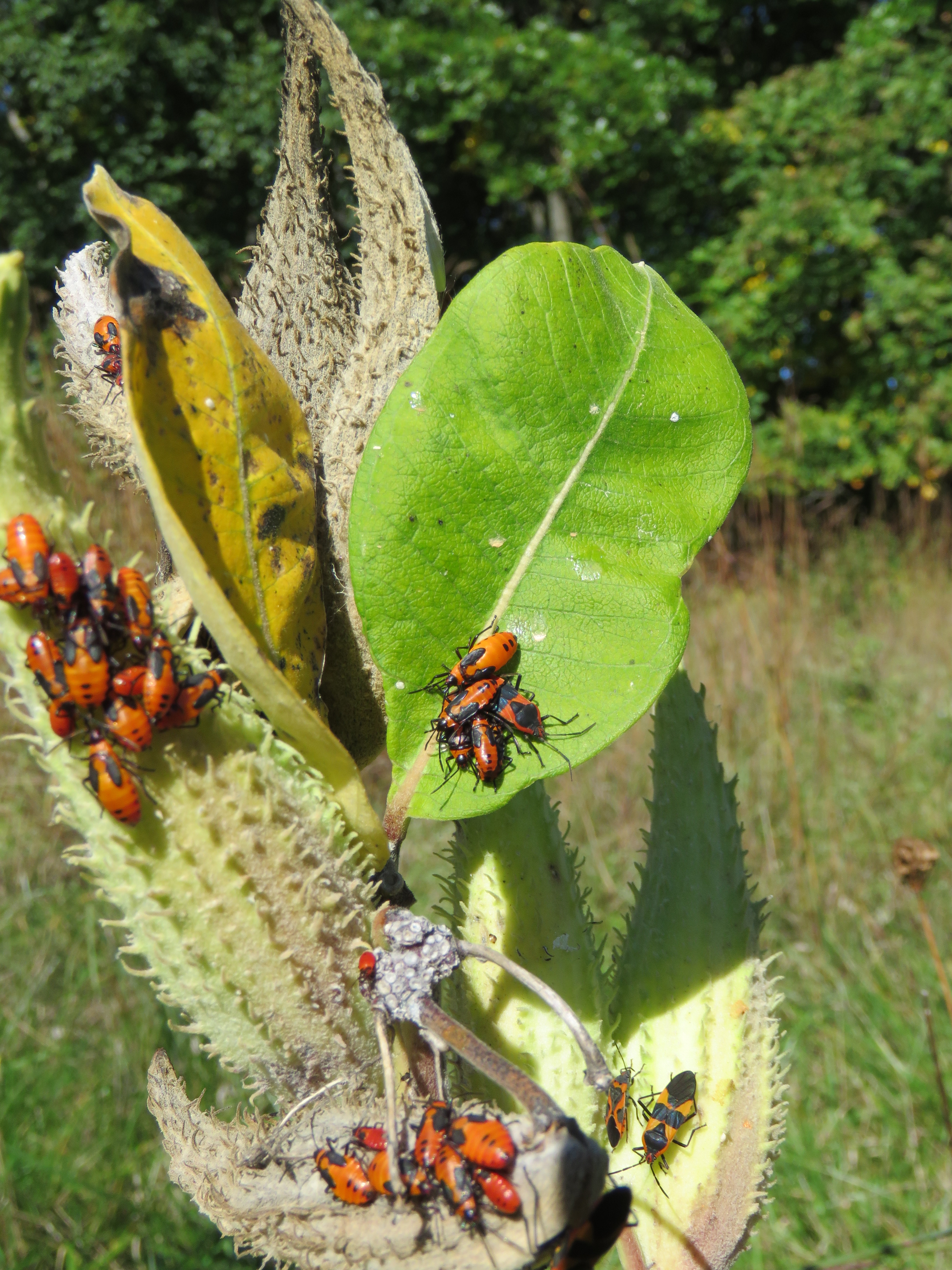 The shortening hours of daylight, coupled with the chill that heralds winter’s approach, will soon end their seasonal gala gatherings of gluttony on the milkweed pods of the wilder side of Oakland County. On your next hike, perhaps make it this weekend, explore the sunny fields and meadows of our Metroparks or Oakland County Parks or search trailside along the Polly Ann, Paint Creek or Clinton River Trails for the silky pods of milkweed and then approach slowly to spy on these beautiful creatures of the wild.

One thought on “Milkweed Bugs of October Meadows”