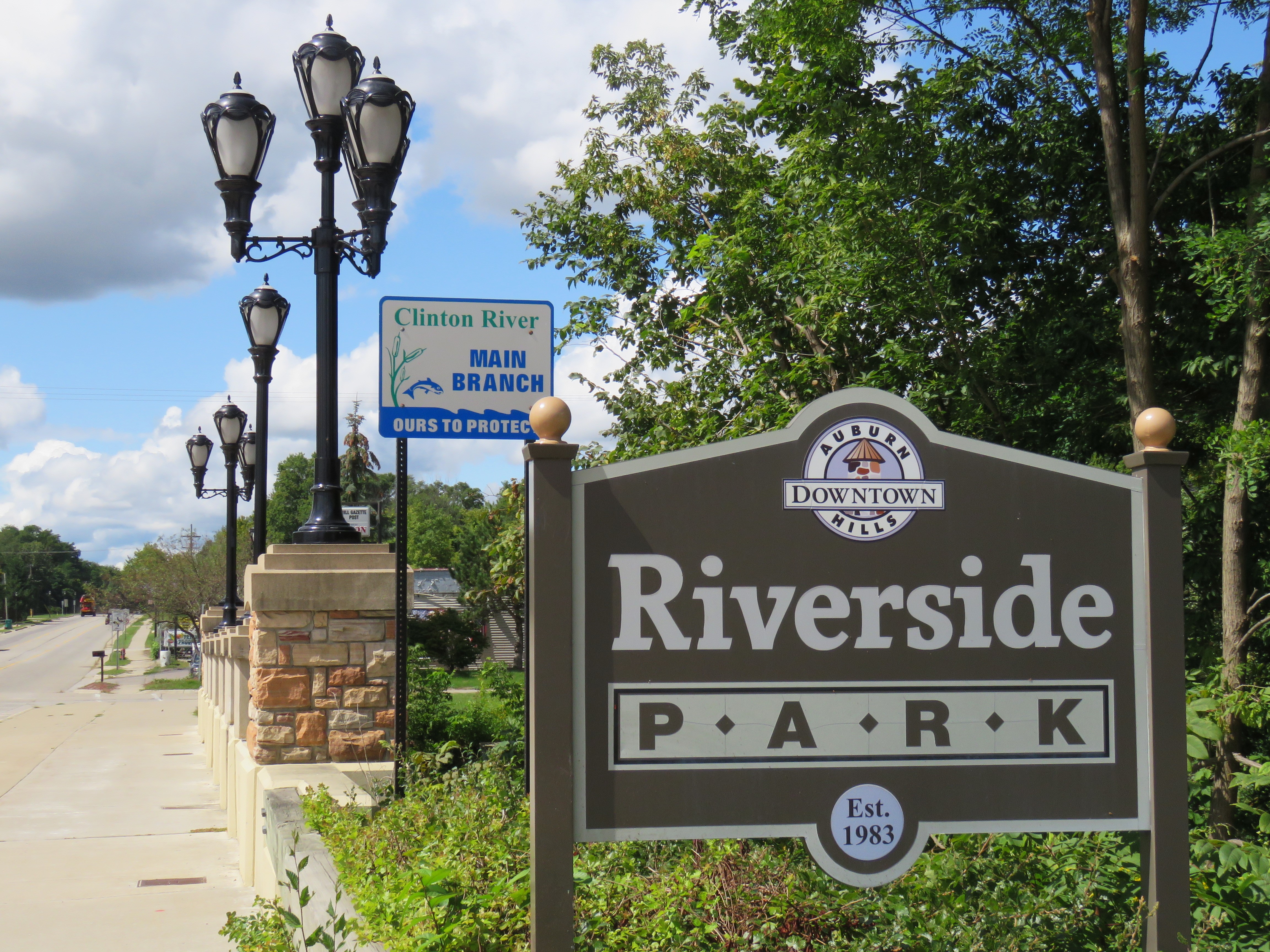 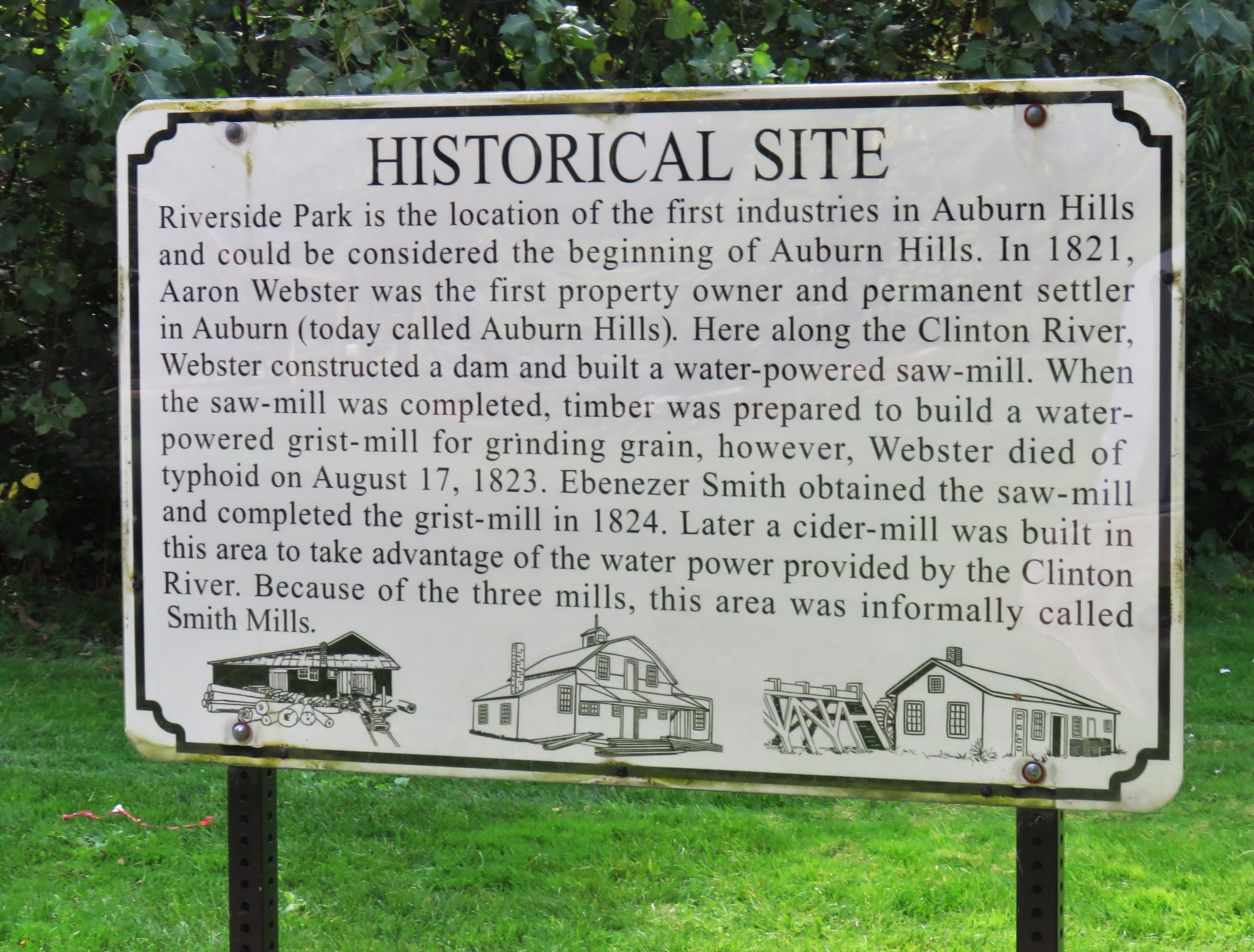 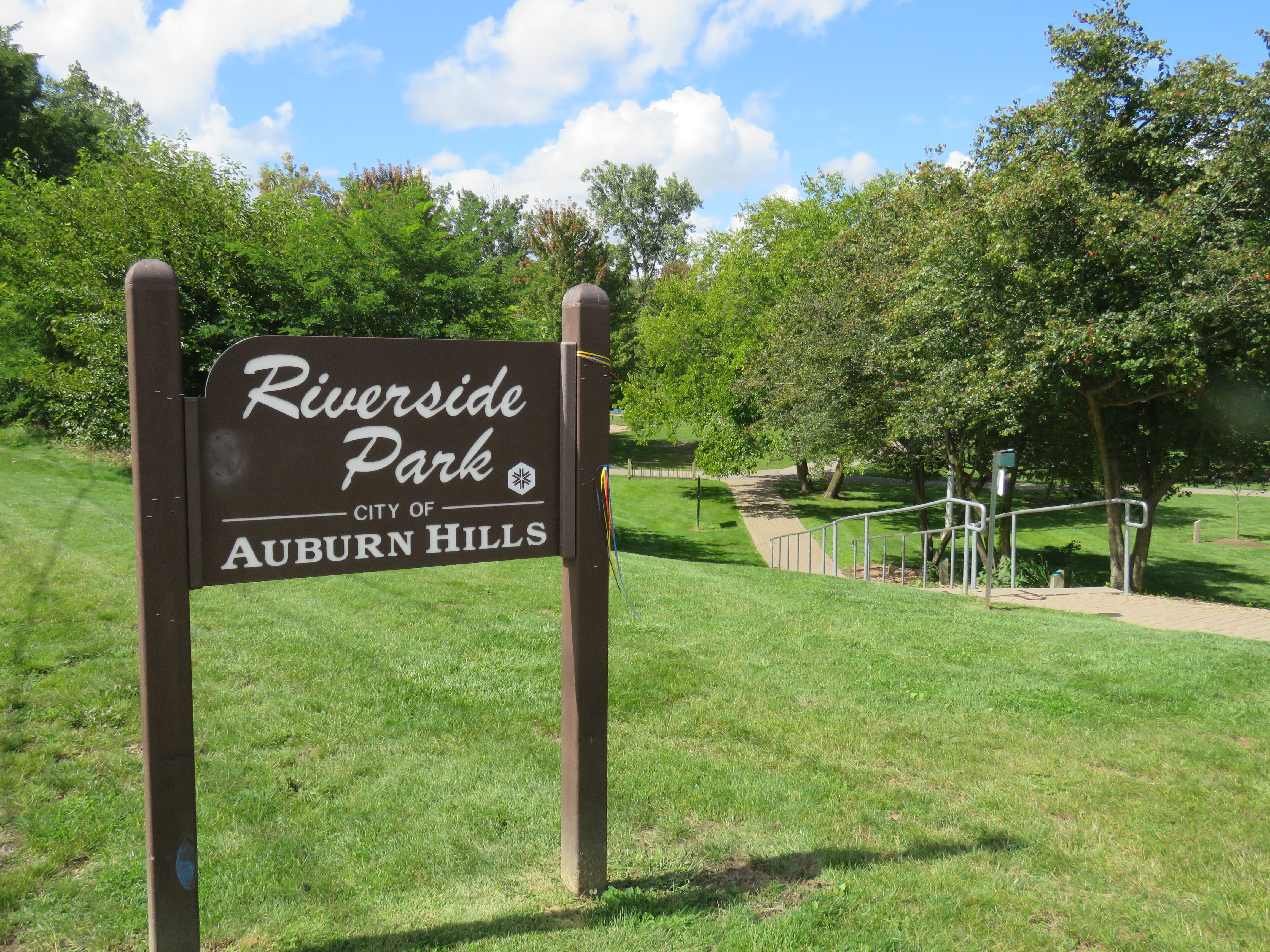 That area is now Riverside Park and abuts the pedestrian-friendly section of the City of Auburn Hills known as the Village Center. I was not aware of Riverside Park until I wandered down the brick paved sidewalk of the Village Center for a meeting over pizza with my old friend Bob Cesario, the owner of Jo’Angela’s Pizza & Deli Company. As we talked about placemaking –  the process of creating quality places that people want to live, work, play and learn in – I noted patrons coming in the front door of his cheerful pizzeria, and some exiting out the back door clutching their pizzas or salads. Cesario explained that on sunny days, some patrons eat their pizza in the park. “What park?” was my question, for at the moment I was unaware of any park in the area, let alone a river embracing, family friendly park just out the back door of a pizzeria. It was that two-word query that stirred the fire that brought to life a vivid fact that is often ignored: the proximity of a trail or river to a community enhances the quality-of-life and adds to the livability, connectivity and attractiveness of that community. Jo’Angela’s is next to the park, and Cesario was equally surprised I was blissfully unaware of the park, but not for long. 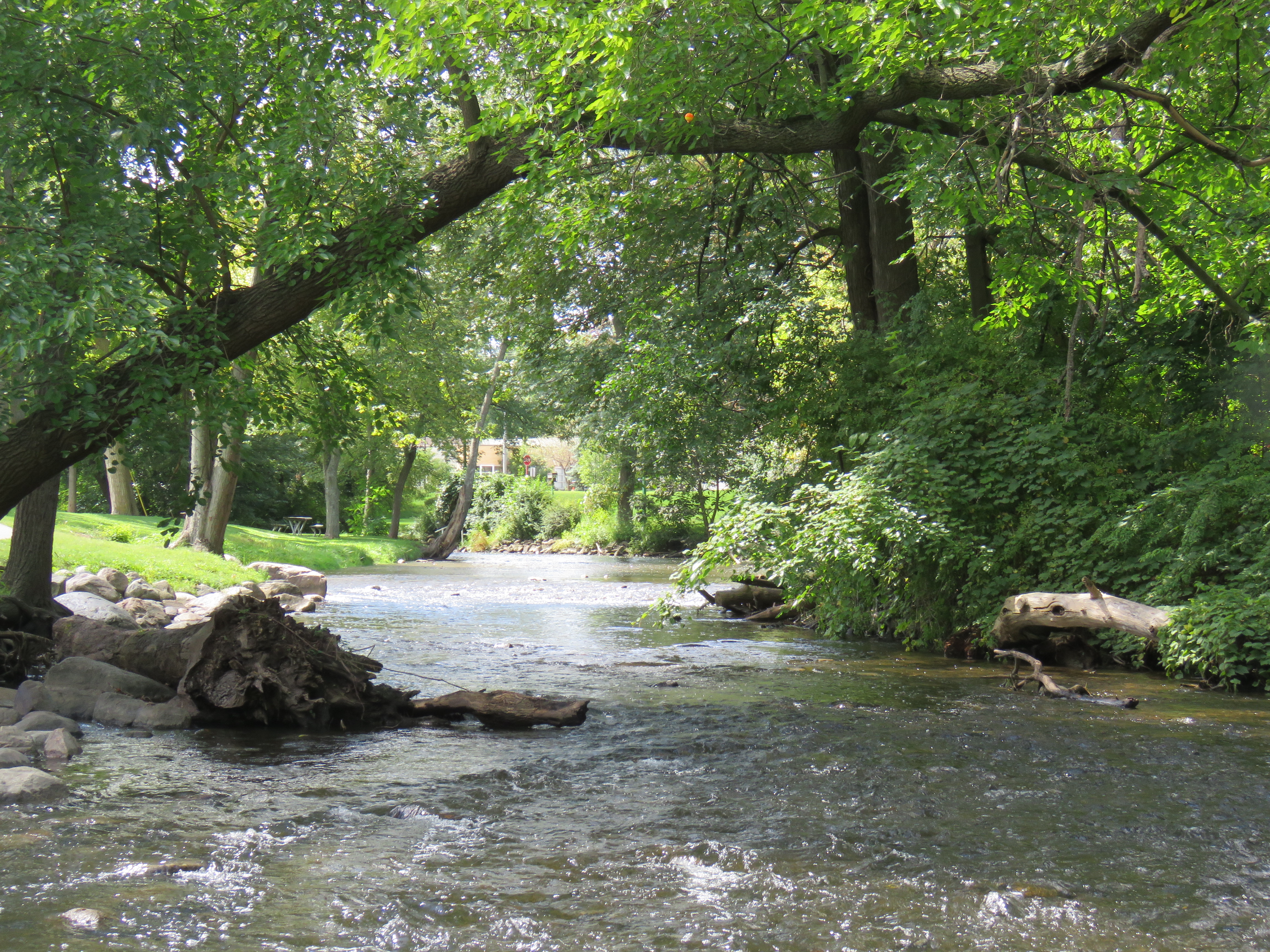 As soon as my pizza was ready I made the ninety second walk to the park in the early afternoon sunshine. I had barely settled down at a picnic table next to the river when I noticed something glimmering on a sun-warmed rock at the edge of the river. I quickly realized I was witnessing intimate moments of damselflies. It was time to set the pizza aside and make a stealthy approach  to capture an image. 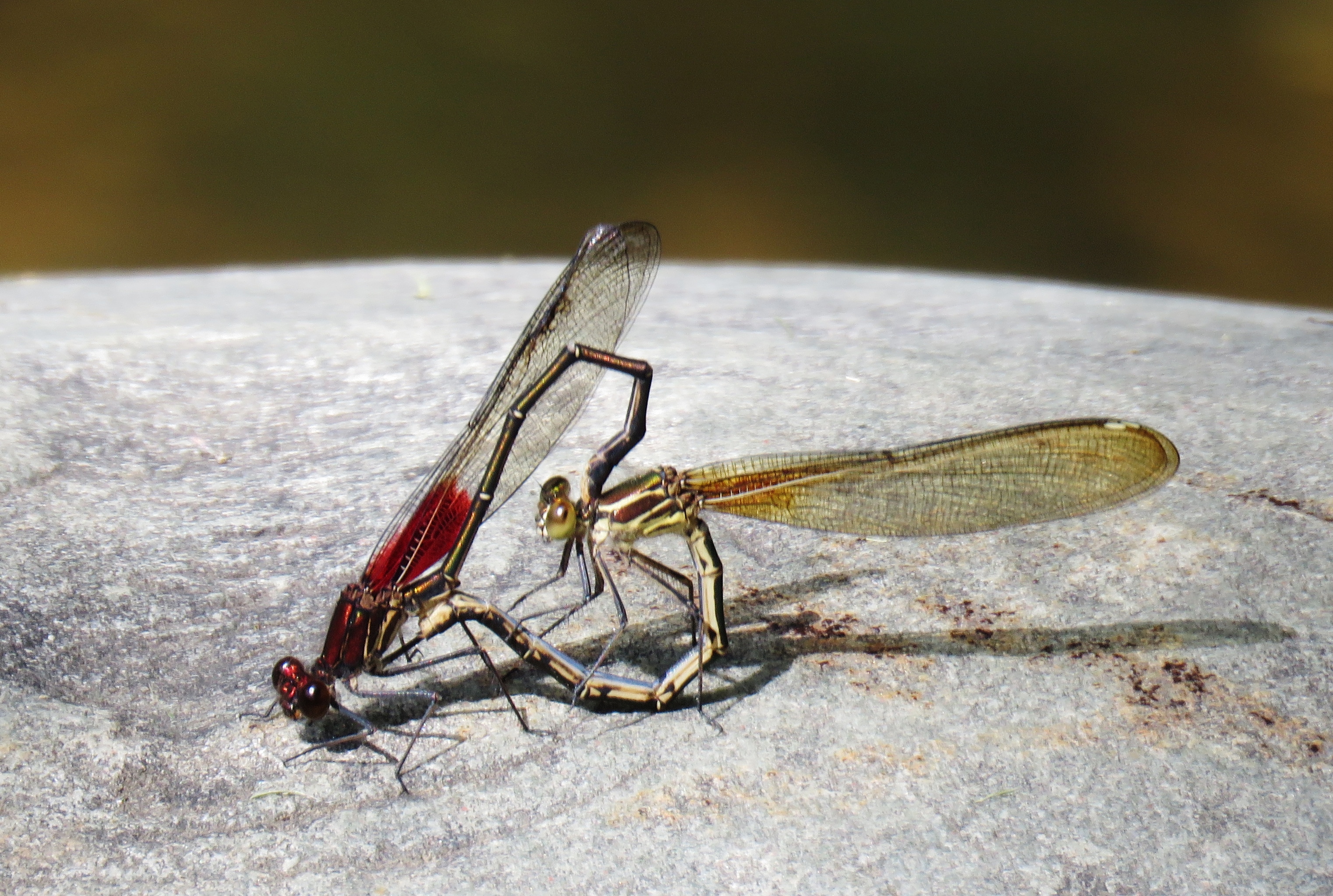 American Ruby Spot Damselflies (Hetaerina americana) can be hard to spot, and next to impossible to photograph when in flight, but when it’s time for mating in the waning days of summer, and they assume their heart shape pose, they are stunning. I will confess, I have watched damselflies mate before, but never while sitting at a picnic table eating pizza. With that wild side encounter behind me I set out to explore the rest of the 10.3-acre park as I listened to water flowing over gentle rapids and watched songbirds in the shrubbery. As I stood to wander, I noted a Cooper’s hawk perched on a limb on the far bank and suspect it too watched the song birds – in hopes of a meal.

Riverside Park is a success story, especially when considering goals of placemaking. Professor Mark Wyckoff of the Michigan State University Land Policy Institute explains placemaking this way. “Placemaking is both a process and tool, by which we collectively design and manage elements of the public realm (markets, waterfronts, squares, streets, parks, neighborhood  and downtowns, etc.) to create places that are appealing, accessible, comfortable, and support social activity. Placemaking can also help build and enhance sense-of-place by creating spaces that encourage social interaction and support interesting activities.”  He was not referring to Riverside Park when he wrote those words, but they fit perfectly. Riverside blends with the theme of placemaking and includes a popular play structure with slides and swings, a canoe/kayak launch, numerous picnic tables, barbecue grills, a paved river trail and even a modern restroom. Well-designed signage on Auburn Road announces its presence, parking areas are present, and the meandering river trail makes it easy for parents to push baby carriages and senior citizens to walk with ease. The layout of the river trail and abundance of benches create opportunity for casual social contact, or moments of solitude on a small slice of the wilder side of our county.

I watched a man fly fish a few feet from the Riverside Trail, as other park visitors walked about during apparent lunch breaks, while parents kept busy with their children at the play structures. Mallard ducks ignored the wandering humans and snoozed on the grass. Butterflies flitted about wildflowers, a reminder that when given half a chance nature thrives. 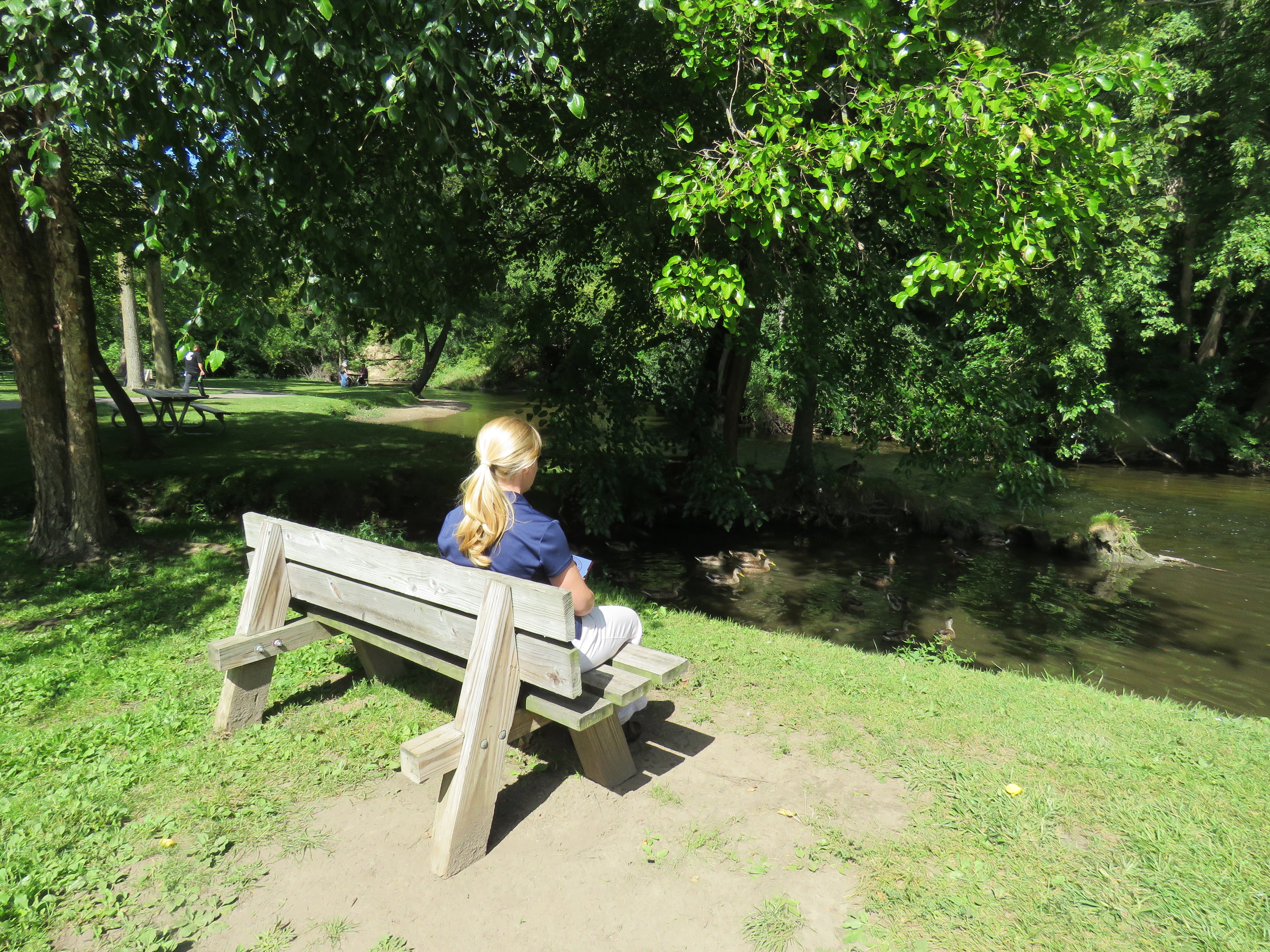 The mellow mood of this small riverside park intrigued me so much that once I was back home I did more digging. I quickly discovered Riverside is the site of the annual Auburn Hills River Day and Fishing Derby, which includes a special catch and release event for children. It’s held every year in June and trout are usually stocked before the festival. Next year will be the 15th time it occurs. For info on next year’s Auburn Hills Fishing Derby contact Community Development, the Parks & Recreation Department or check the City of Auburn Hills website. For info on all the other River Day activities planned throughout the Clinton River Watershed, visit the Clinton River Watershed Council’s website. 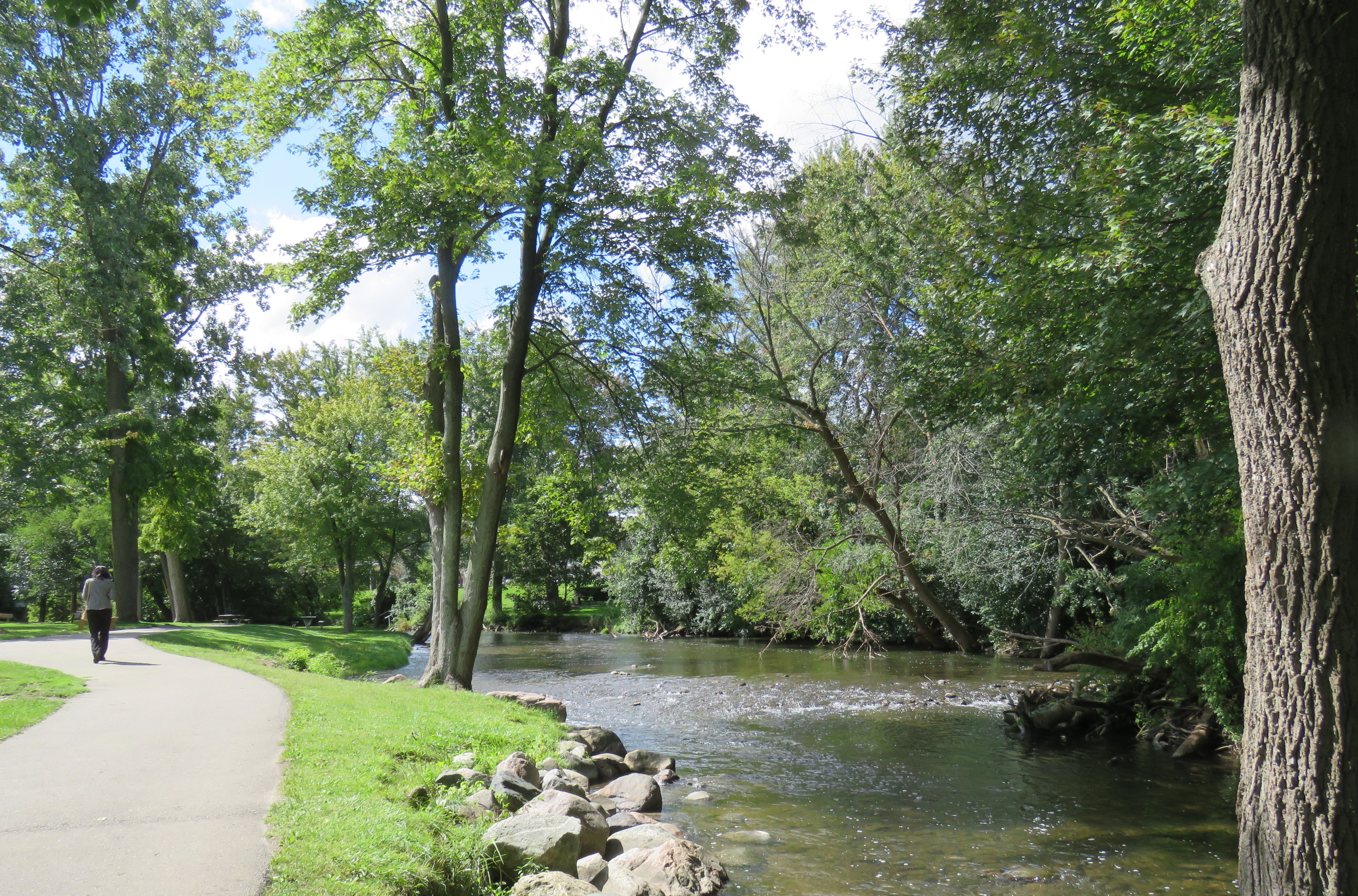 Riverside Park is also the launch site for the annual Paddlepalooza, a river event-sponsored by the City of Auburn Hills and the City of Rochester Hills that takes place on an 8-mile stretch of the Clinton River. It begins at Riverside Park and ends at the Rivercrest Banquet Center at Avon & Livernois. Paddlepalooza was described this way earlier this year: “Event includes a race for seasoned paddlers (canoe and kayak) or a shorter, adventure paddle for individuals to paddle the river…both options include fun on the water, great scenery, wildlife and lots of fresh air!” Another perfect example of placemaking. 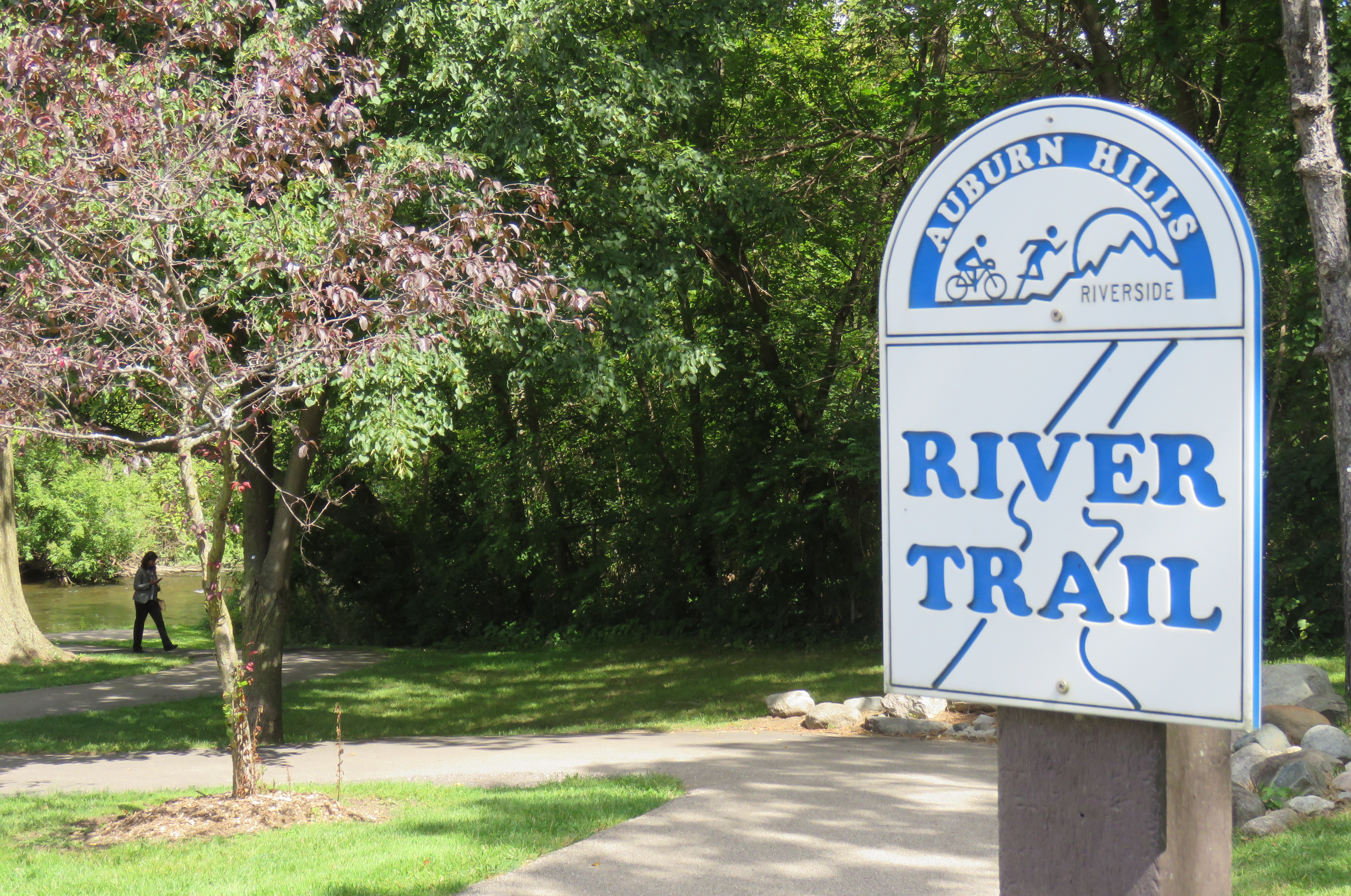 Although my visit to the park was too late in the season for their summer music series event, another placemaking feature I had been unaware of just may draw folks to the park and local businesses; a free Wi-Fi Network that can be accessed indoors or outdoors and blankets the revitalized downtown area and Riverside Park.

I contacted Bob Cesario for final fact checking about placemaking concepts, and asked for his thoughts about the Village Center. He said, “What a hidden gem downtown Auburn Hills is! Although it is in the rough, there are still so many great things to do and see in the area.” He paused, adding, “Park visitors should think about joining us at Jo’Angela’s Pizza and Deli Company for some great pizza, subs, or a deli sandwich or pasta. We also have a great placemaking partnership with Michigan by the Bottle Tasting Room on Wednesday evenings for a combination wine tasting, with pizza from our menu. We deliver your pizza to them free of charge, and offer a 10% discount on your order. What a great time!” 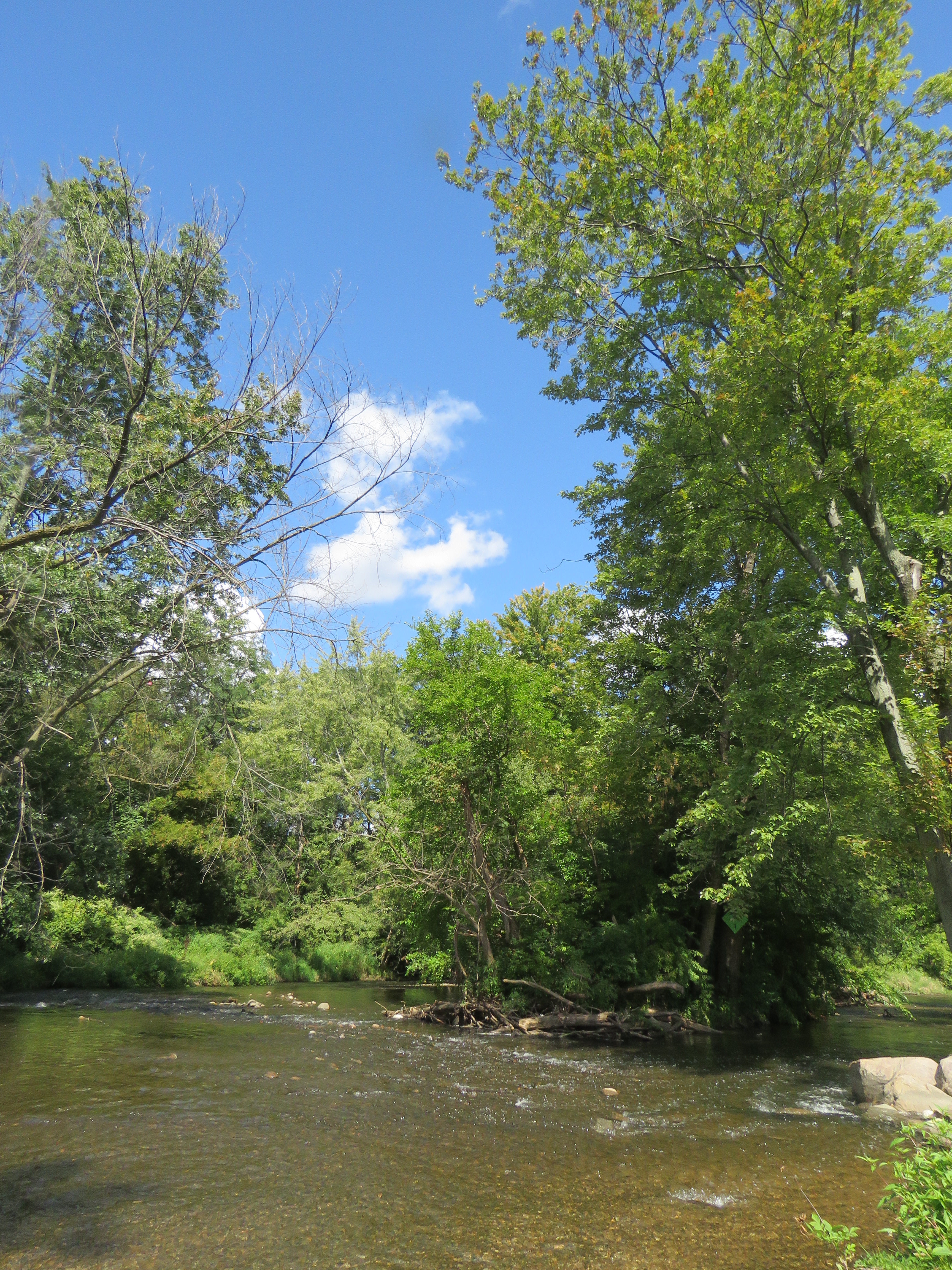 John Muir once penned “Everybody needs beauty as well as bread, places to play in and pray in, where nature may heal and give strength to body and soul.” A walk in Riverside Park, coupled with a meander down the main street of the Village Center, might just be the kind of place that would make Muir smile as a pleasant, yet social respite from a busy world: with, or without pizza.

5 thoughts on “A Park on a River, Placemaking, and Pizza”