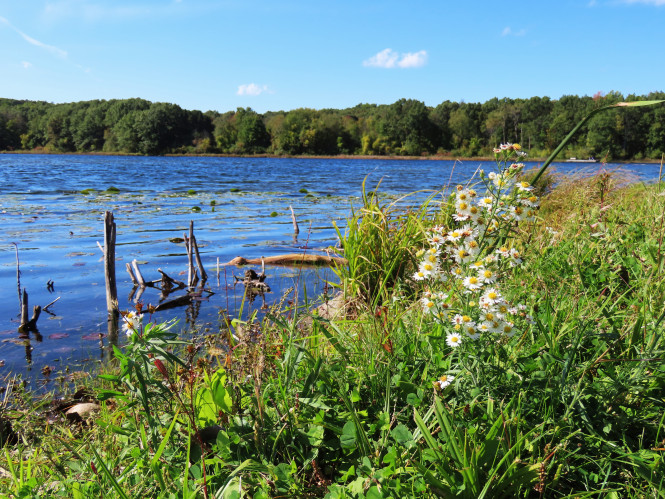 October is not the time to stay indoors and wish you were outside. In the past few weeks I’ve had inquiries from folks that are new to the world of hiking and want to start the hiking experience on trails that are “easy to hike” while enjoying the splendor of October. Easy can be interpreted in different ways by different people. It’s been ten years this month since I hiked up what was billed as the “easy” side approach of Mount Kilimanjaro. I struggled at times in the thin air, but made it to the 19,340 foot high summit. It was not easy. Let’s forget the word easy for now; if you are looking for a trail that’s family-friendly, embraces nature, and perhaps most importantly, won’t get you lost, I have one for you. It’s a real gem with great lakeshore views, and if you hike on the weekend you will never be alone. 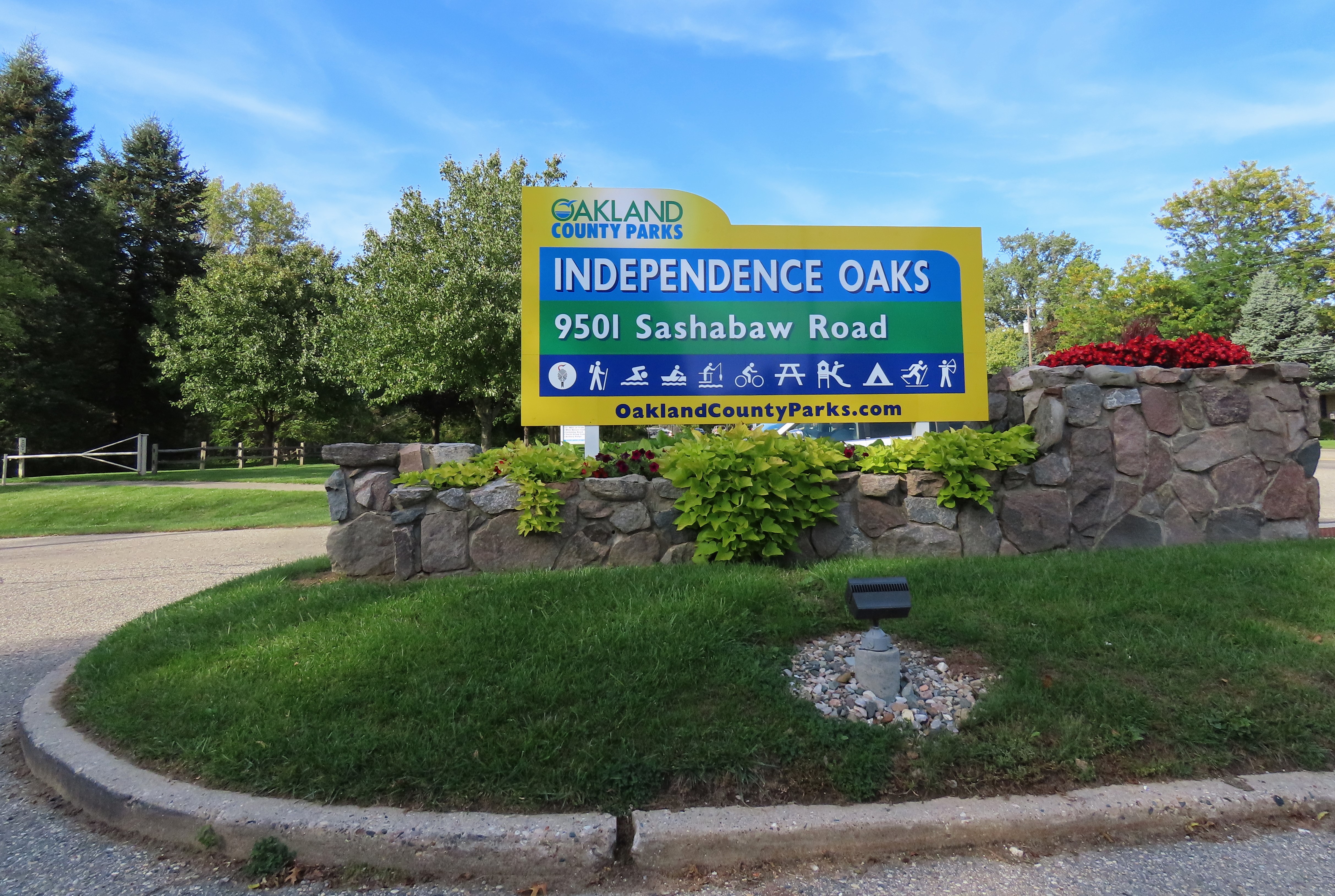 It’s the Lakeshore Loop Trail, a 2.3 mile trail that that circles around 68-acre Crooked Lake at 1,286-acre Independence Oaks County Park, the largest park managed by Oakland County Parks and Recreation. October is the perfect time to hike the trail as sassafras leaves shimmer in shades of orange and red, aspen leaves crackle and flutter in restless breezes, red maple leaves turn scarlet-red, with some landing on logs rich with green moss, and fantastic full fungi appear. It’s a soothing time to hike with the songs of chickadees that flit about northern white cedars as red-tailed hawks soar overhead and red squirrels and chipmunks scurry about on acorn hunts. I think it’s safe to call the Lakeshore Loop an easy trail. It’s surely a very popular trail as autumn paints the landscape with brilliant colors and the mosquito population plummets to nearly zero.

A confession: I last hiked that trail last Saturday afternoon around 3 p.m., one of my least favorite times to hike any trail. I am not an antisocial person, but my favorite times for that trail, or almost any trail, would be shortly after sunrise or the magical hours before dusk, for that is when I encounter the least people and see and hear the most wildlife. But did I have a good time last Saturday? You bet I did and I also had some intriguing waterfowl encounters as the hike progressed. I hiked with an equally addicted trail user friend and we were far from the only trail users that day. As we trekked clockwise, we encountered a few dozen others heading counter-clockwise, some in small groups, some alone and some with well-behaved leashed dogs. 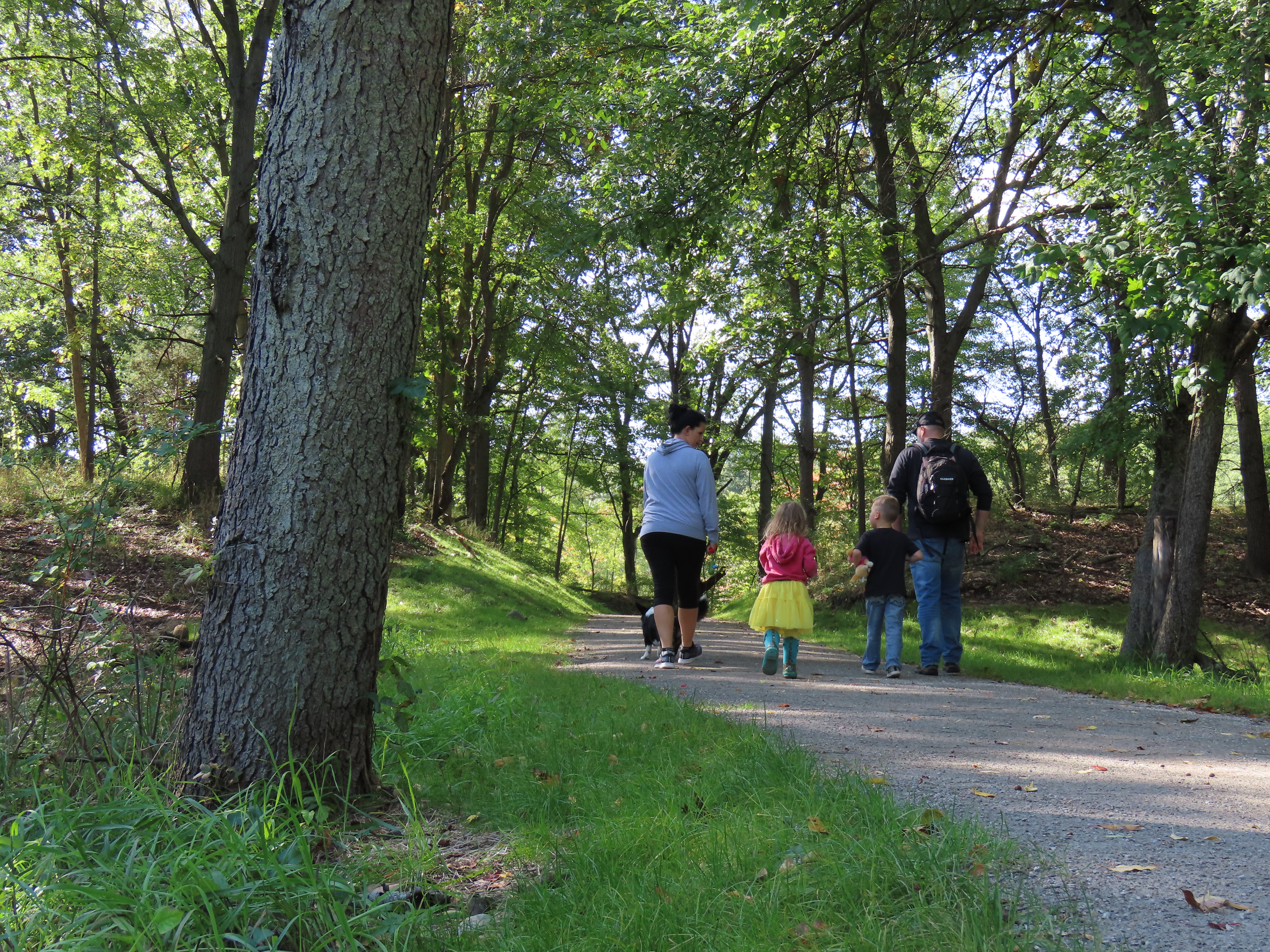 There are many places to access the Lakeshore Loop, a trail that is mostly crushed gravel and hard packed earth with minimal elevation changes. For a first timer I would suggest my favorite access point which is from the parking lot next to the boat house, a location that also has picnic shelters, barbecue grills and restrooms. Crooked Lake is for non-motorized use, making it a peaceful place for canoeists, kayakers, picnickers, and of course hikers. The boat house also doubles as a ski rental shop on weekends once snow blankets the trail. 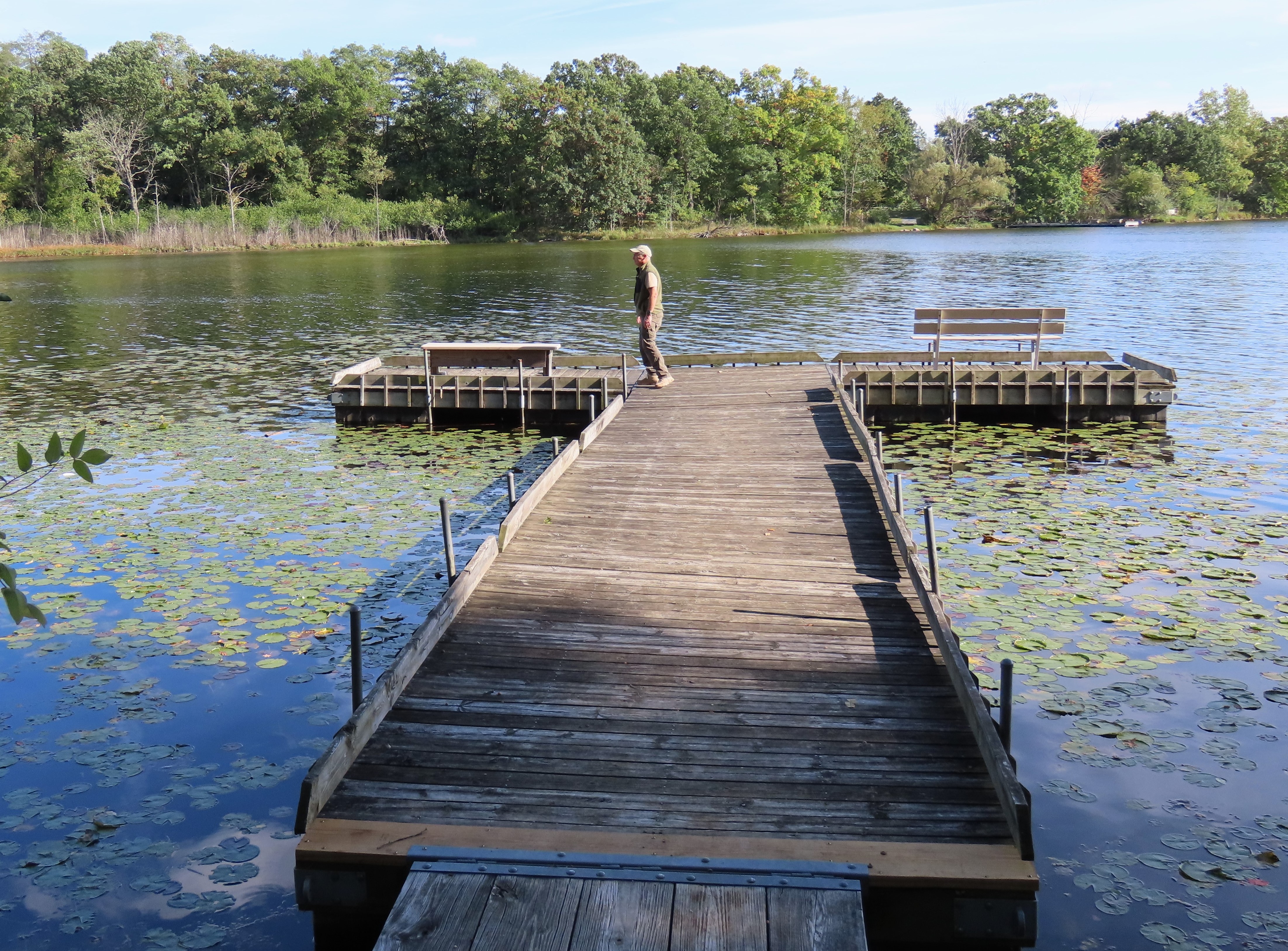 As I walked out to view a kayak launching platform, known as an “accessible transfer system” for kayakers with disabilities, I was greeted by a Great Egret that was fishing in the shallows adjacent to the dock. The egret flew to the southwest shore of the lake, a location that also has a well-hidden beaver lodge and most likely provided it with a more secluded fishing spot.

This Oakland County Parks and Recreation map shows the boat house location, the trail route and opportunities to connect with other trails, including more challenging ones that climb up and over the glacial moraine on the west side of the lake. Trail junctions have Trail Reference Point maps and signage keeping users on the trail they want to be on. 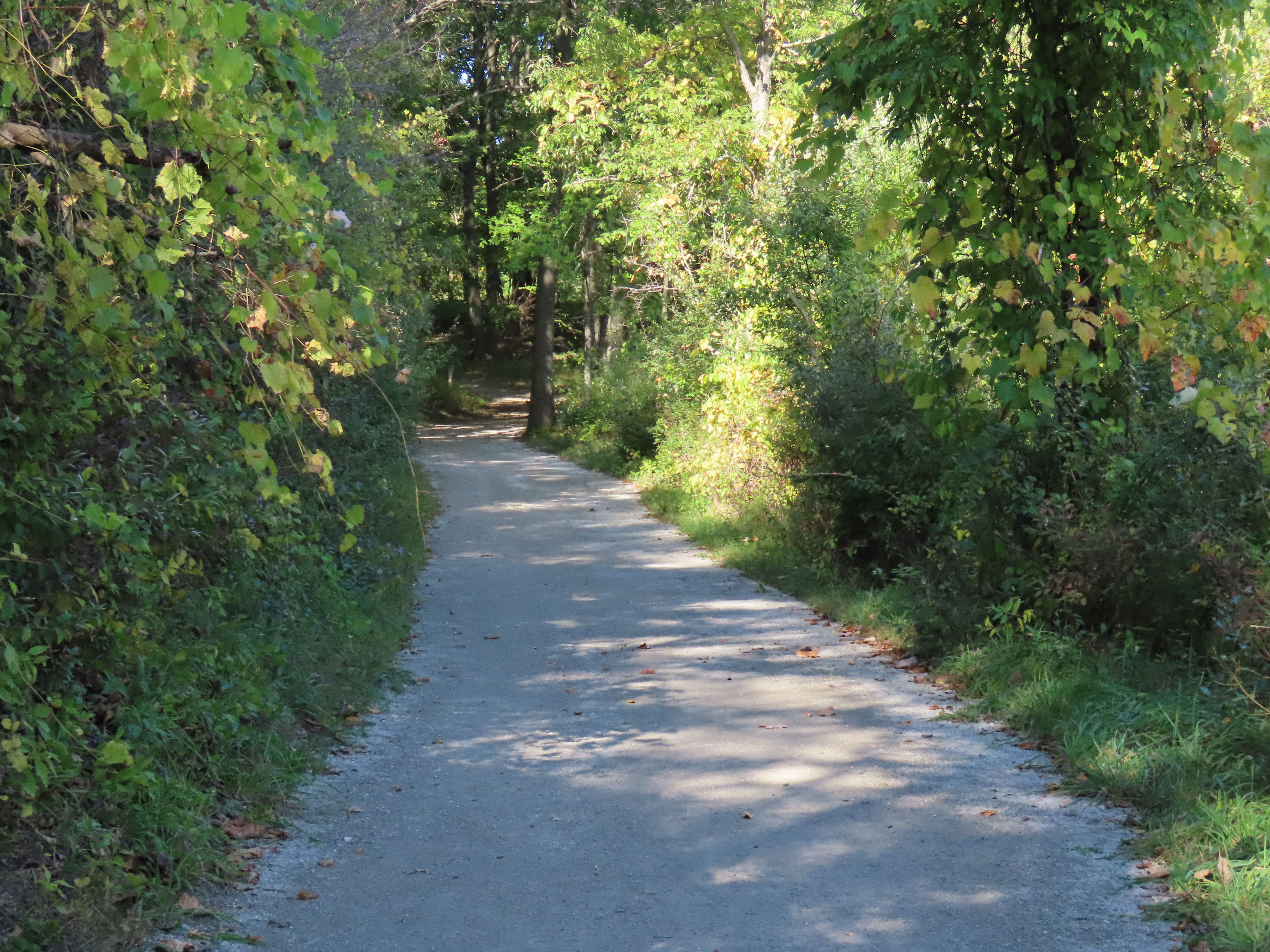 Once we started our actual hike, our first wildlife encounter was with a woolly bear caterpillar crawling across a well-trodden section of the trail, just south of the boathouse. We expedited its crossing to the other side and it continued to crawl along as it searched for a satisfactory overwintering site that is usually under thick carpets of leaves, behind loose tree bark or within cavities of decaying logs. 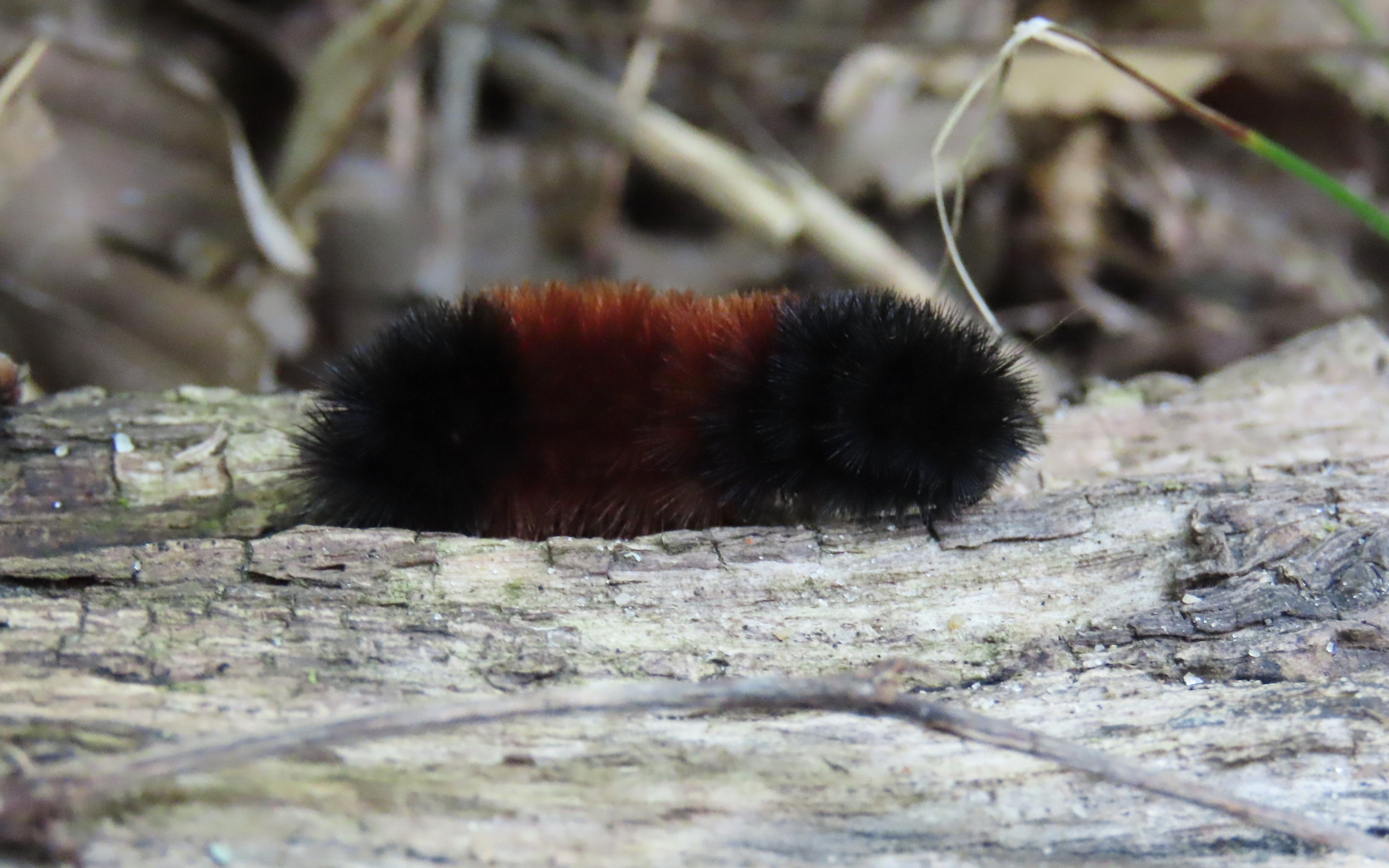 The last few weeks have brought many sightings of these easily recognized black and brown caterpillars as they crawl, and at times, scurry along like this speedster did in this video I captured. When spring arrives, they’ll emerge from their winter hideaways, spin fuzzy cocoons and transform into the less recognizable Isabella tiger moth.

We made a slight diversion near the southeast corner of Crooked Lake to walk out to Bay Point on a very short spur trail that leads to a small bluff and an old dock that provides stellar views of the lake and is also a popular semi-secluded fishing spot. We noted snails in the clear water amidst fallen leaves, another sign of the change of seasons. It’s a great morning spot to encounter resting or migrating waterfowl and sometimes listen to woodpeckers.

Although I often hear Pileated Woodpeckers and encounter deer on early morning hikes, they remained absent from view and sight on Saturday. However we spotted a “different looking” beautiful duck in the shallows, just yards from the trail, and I captured a few images as it preened and fed. When I returned home and studied the photos, I noticed the olive bill and finally identified it as an American Black Duck. It was a bird species I was unaware of and I excitedly shared one image to Facebook with the following caption from the Cornell Lab of Ornithology, “The American Black Duck hides in plain sight in shallow wetlands of eastern North America. They often flock with the ubiquitous Mallard, where they look quite similar to female Mallards. But take a second look through a group of brown ducks to notice the dark chocolate-brown flanks, pale grayish face, and olive-yellow bill of an American Black Duck.” As it turned my identification was wrong. A duck hunter friend who is also an avid birder and accomplished outdoor writer noticed my post and graciously explained, “It’s a drake mallard, either a juvenile or a male that is still partially in eclipse.” Here’s some excellent information on what “eclipse” means (I did not know either) and also confirms my friend’s comments and identification correction: Wintu Audubon Society: Eclipse of the Ducks.

As we continued our hike along the west shoreline we spotted painted turtles sprawled out on logs, catching early October warmth. Several hikers did the same and also sprawled out on benches and docks along the way, adding emphasis to the words, “easy hike.” We continued our easy meander past brilliant poison sumac shrubs at the water’s edge and then followed the trail around the north tip of the lake, passing by popular play structures and picnic areas on the east shore, all of which were bustling with human activity. Our very slow paced nature-embracing trek led us back to the boat house as more hikers and a few parents with toddlers in tow set out on the Lakeshore Loop. It’s a beautiful trail, it’s an easy trail and it beckons in the golden days of October. For more details on Independence Oaks County Park, or other parks managed by Oakland County Parks and Recreation, visit their website.