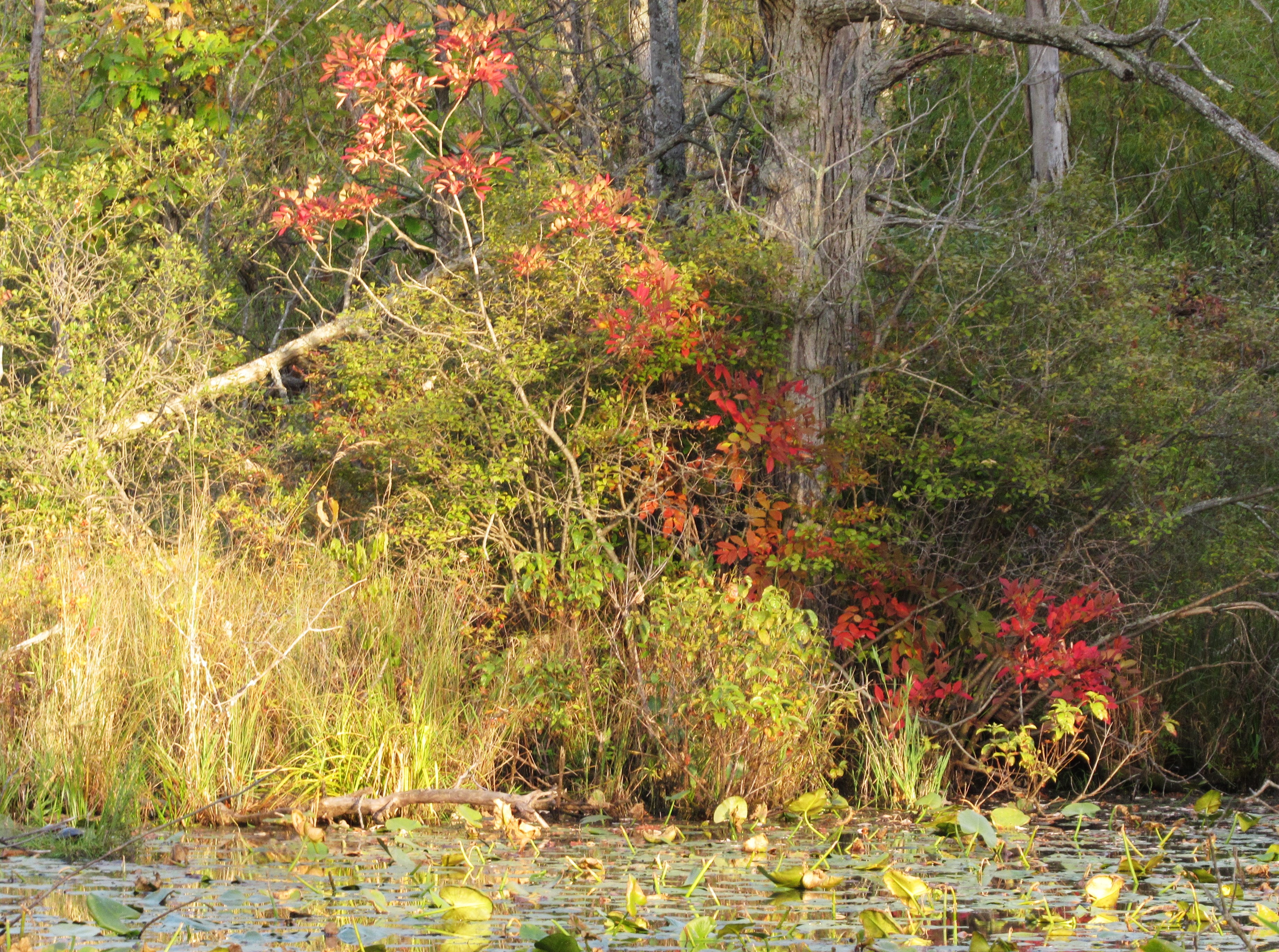 Autumn is the season for a plethora of nature-embracing outdoor activities under canopies of kaleidoscope colored leaves and restless winds. It’s the time to hike the woodlands, explore our network of cyclist friendly trails, fish, camp, share a quiet picnic on a lakeside hilltop, and kayak our beautiful lakes in a soon to be mosquito-free environment. It’s the season when young children chase after long-leaping leopard frogs hidden in moist meadows and collect colorful leaves for their parents. Autumn accelerates our hunt for wild mushrooms, with chicken of the woods being at the top of the list, and entices foragers to gather the last of the wild blackberries. We dodge falling black walnuts and bid farewell to Ruby-throated hummingbirds, Sandhill Cranes and Ospreys in these early days of autumn. Perhaps best of all, we are at the cusp of the season to embrace pumpkin-spiced everything! 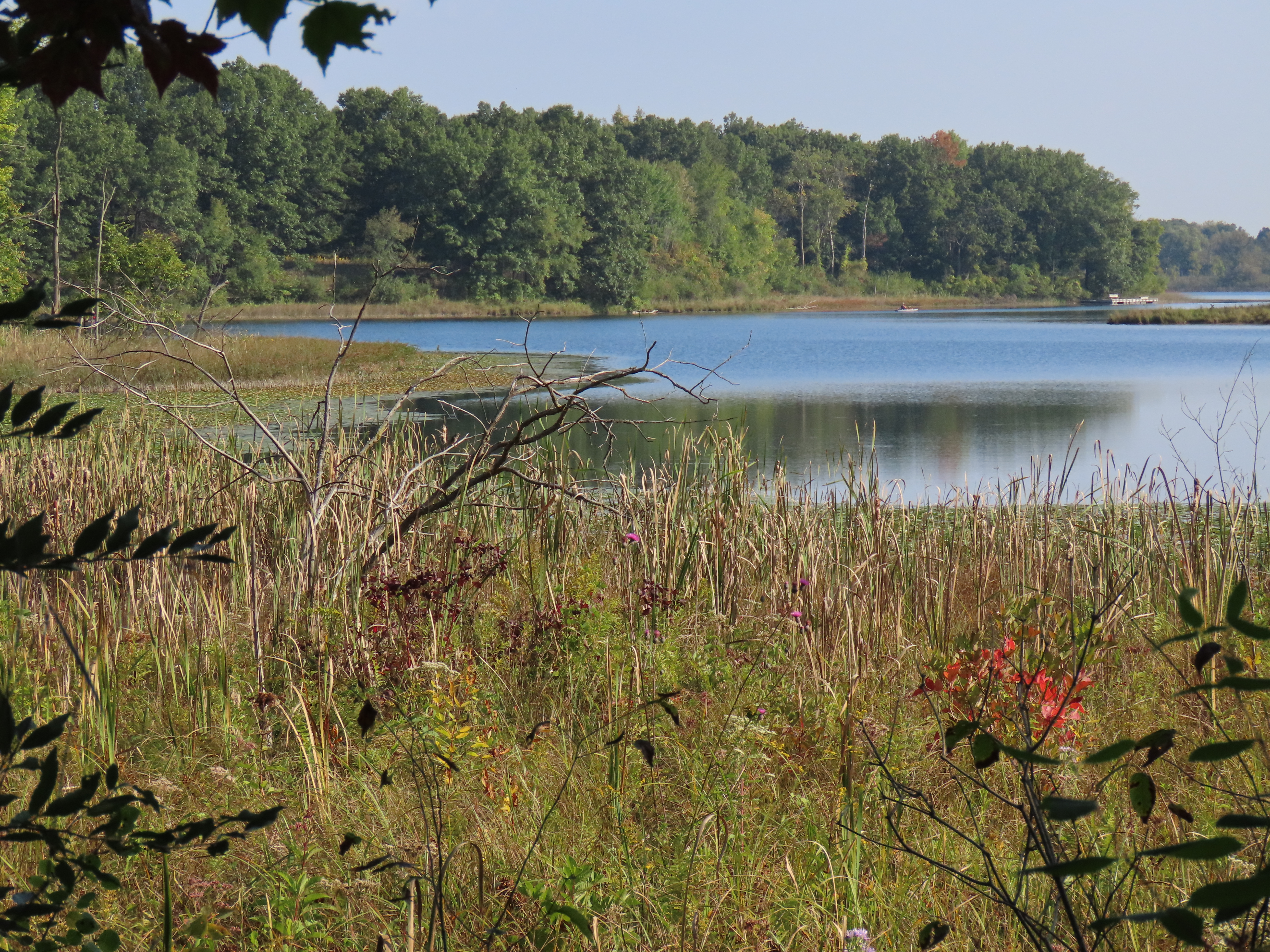 Autumn is also the season when some outings, especially those near trailside marshes and on wetland crossing boardwalks, turn into a totally miserable experience a day or two after coming home that leaves one scratching with the fury of a dog with fleas and wondering, “What happened?”

The answer lies on the wilder side of Oakland County in the form of a scraggly shrub that sometimes looks more like a small tree. It bears the scientific name of Toxicondendron vernix, but is better known as poison sumac. 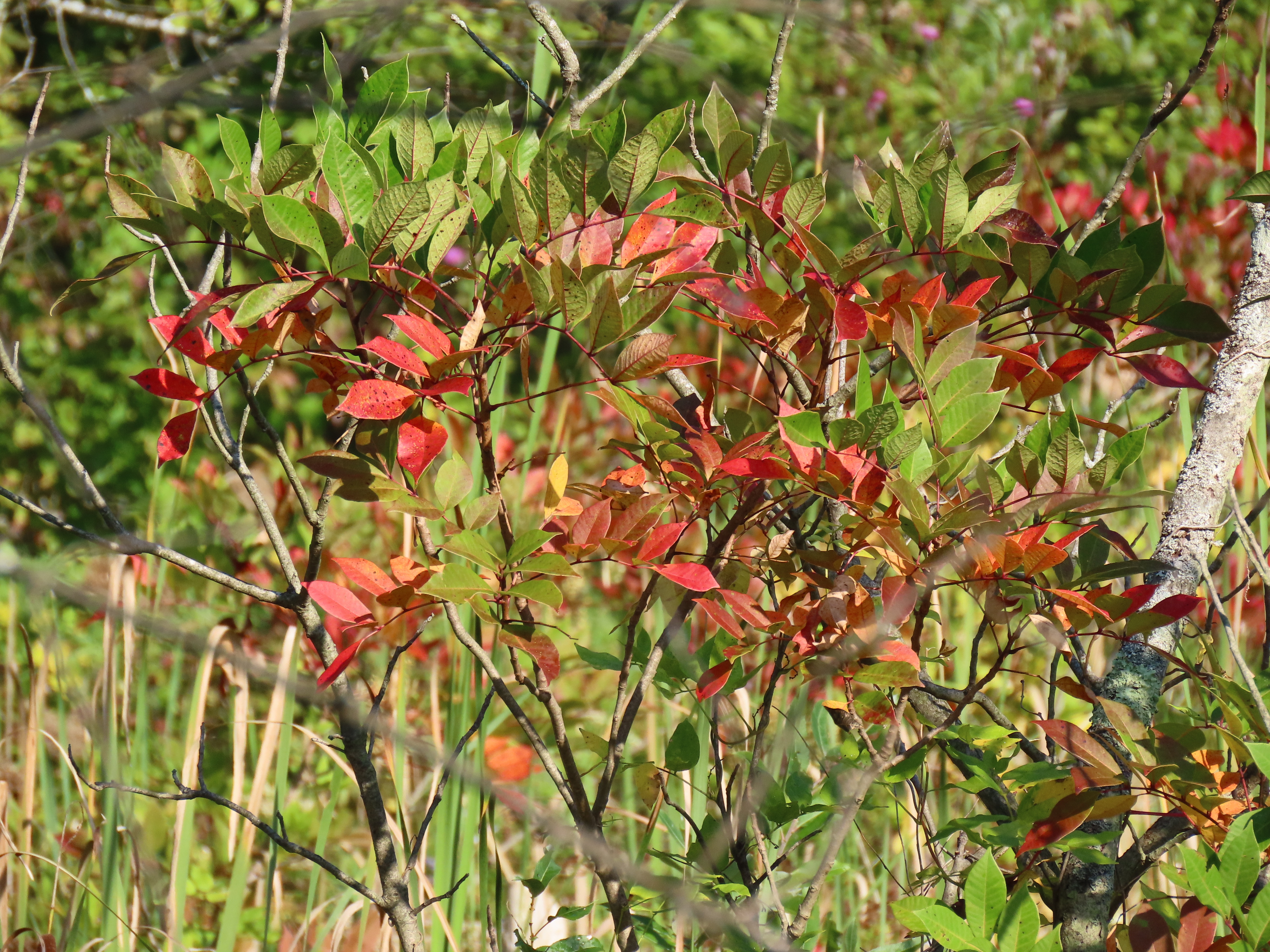 Poison sumac thrives in and near swamps, marshes and other wetlands. In contrast, staghorn sumac, also known as red sumac, shuns wet areas, is prolific in dry, sunny areas and is often seen on the slopes of highways. In autumn the leaves of both species turn red, but that’s where the similarity ends. Red sumac turns a dull deep red while poison sumac leaves take on a shiny and rather fiery looking reddish-orange hue.

Their fruits have more distinguishing characteristics with staghorn sumac having very fuzzy red fruits that appear in tight cone-shaped clusters, held upright and resembling an Olympic torch, while poison sumac has very tiny whitish-yellow fruits that dangle downwards on thin stalks. Less noticeable is the fact that stems of poison sumac are always smooth and reddish in color with leaves that consist of seven to thirteen leaflets arranged in pairs (as in opposite each other) with a single leaflet at the end, while young stems of red sumac are fuzzy appearing and resemble the antlers of a buck in velvet.

Identification misinformation between the two species, and the inability of many to even recognize poison sumac, can lead to incredible misery and increased business for dermatologists and on occasion, the emergency department of hospitals. All parts of poison sumac are poisonous in the sense that they cause a severe skin reaction. There is general consensus among knowledgeable dermatologists and medical professionals with wilderness medical experience that poison sumac is more allergenic than poison ivy. Poison sumac contains an oily substance known as urushiol, the same substance in poison ivy that causes woe, pain and misery. Contact with that oil usually occurs when the plant is bruised, cut, torn or burned and leads to an allergic reaction known as contact dermatitis. Red sumac, however, is not poisonous and is safe to touch. Some naturalists and foraging campers, including me, collect the fuzzy red seeds in autumn to make a tea that has a lemonade flavor. 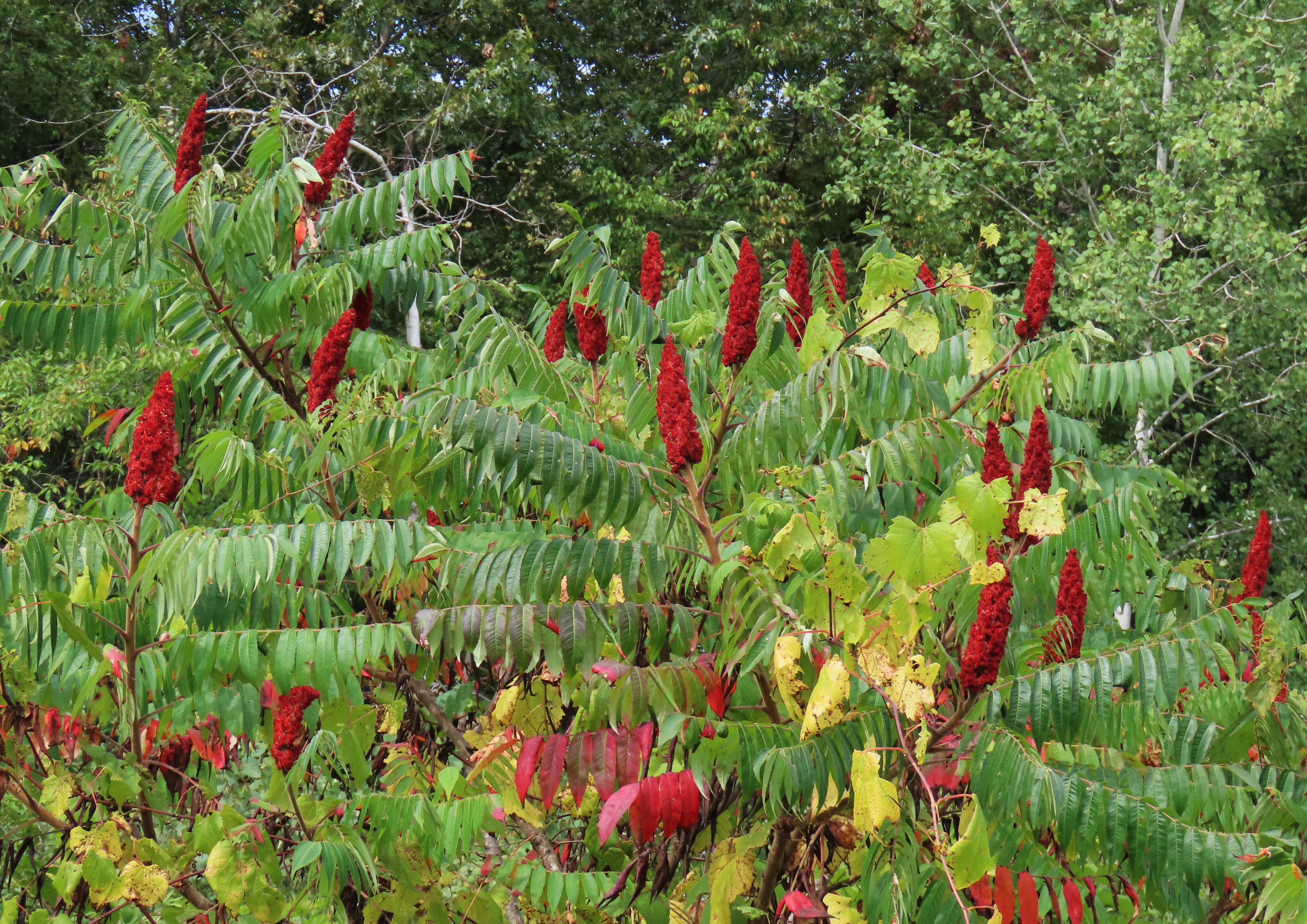 Poison ivy and poison sumac are abundant in Oakland County. There is no poison oak in our county and although poison ivy is found in every county in the State, poison sumac is mostly found in southern Lower Michigan wetlands, with only a few scattered locations in the northern portion of the Lower Peninsula.

Don’t let the presence of poison sumac slow down your outdoor plans. Learn about it! There is no “cure” for the rash, but there are preventive methods, with identification of the plant being the leader of the pack, and as I discovered, there is a plethora of incorrect information making the rounds on Facebook. Facts are necessary.

Generally speaking, if you stay on trails and are not a swamp-trotter, marsh-explorer, ditch-prober, or river-rat, you will never encounter poison sumac with one notable exception and that is when crossing nature-embracing boardwalks that pass over wetlands. I captured this image just last week of poison sumac hugging the edge of boardwalk in northern Oakland County. I knelt for a photo and then hiked on. 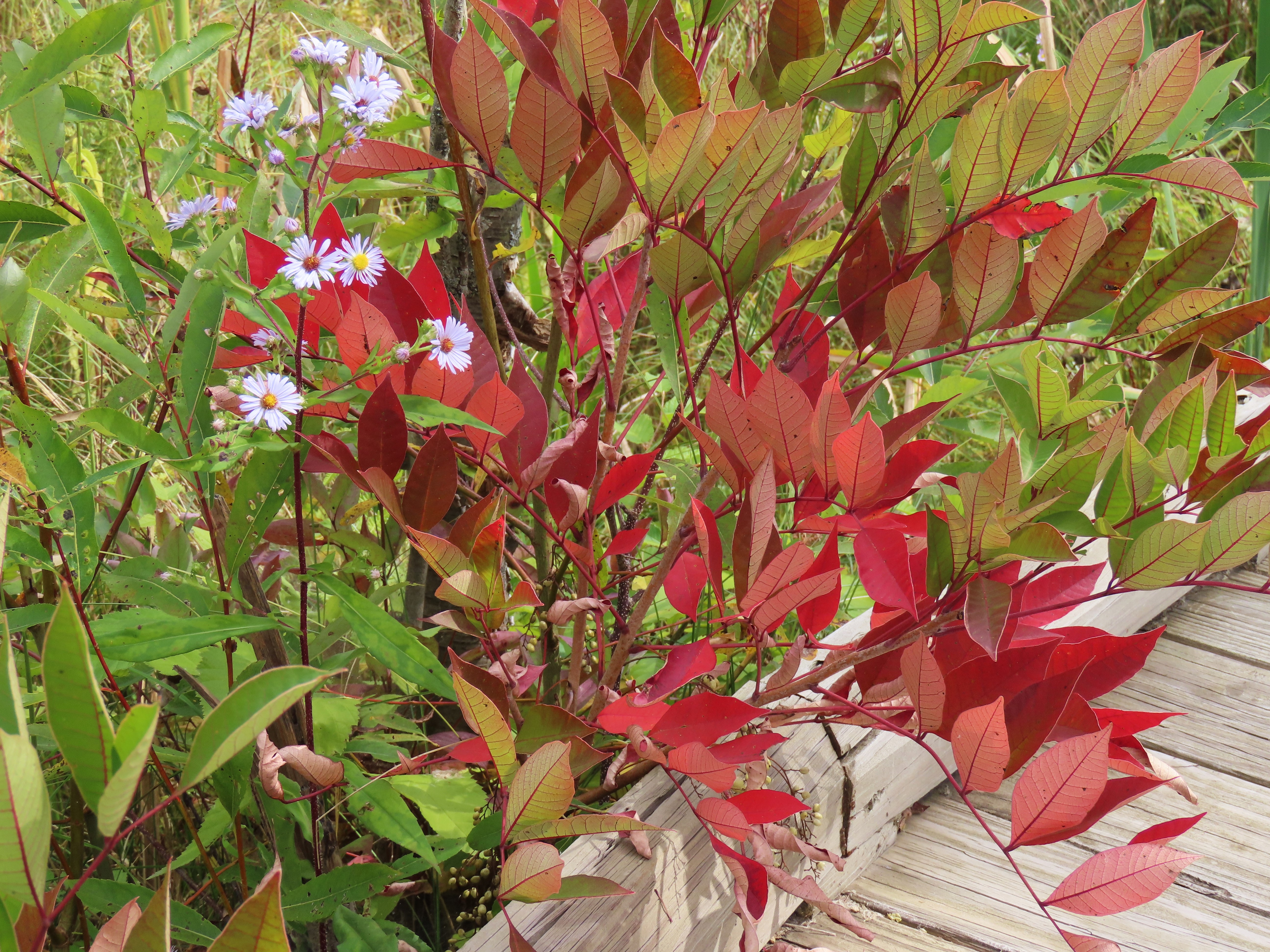 I proudly consider myself a swamp-trotter, marsh-explorer, ditch-prober and river-rat and only once, about four years ago, ended up with a poison sumac rash on my neck and wrists. That unfortunately memorable encounter occurred when I was trekking off trail at Rose Oaks County Park to set a wildlife camera trap near a small hidden beaver dam in late autumn and did not realize at first I was pushing aside the branches of poison sumac at face-slapping height to reach my camera trap location. The whitish berries dangling from the leafless stems of the plant warned me too late that I might be in trouble, and I was. I was rewarded, however, with a few grainy black and white images of the beaver that lured me into trouble, a price worth paying. I was so intent on my mission that I failed in doing what I should have done as soon as I realized I had been exposed, and that was to remove the oils from my skin.

My favorite oil removal method would have been using Tecnu Extreme, a product I always keep in my day pack, but it was inconveniently left at home that day. The next best method would have been to thoroughly wash with soap and cool water. I did not. I was miserable for more than a week. There are numerous products on the market to remove the oils and relieve pain and itching, but sometimes the swelling is severe, the pain is intense and in rare cases leads to difficulty in breathing, making it a true medical emergency. Tec Laboratories, a leader in the battle against urushiol, writes:

“First, you must remove any remaining rash-causing oil, urushiol, to contain a rash from spreading and allowing your body to begin the healing process. Second, you need an effective anti-itch treatment to relieve the miserable rash symptoms.”

The most common early symptoms of exposure are a slight burning sensation on the skin coupled with itchiness, swelling and redness that are usually followed a few days later by watery blisters. The rash usually appears one or two days after exposure but sometimes it takes longer and the symptoms can last for weeks. And contrary to myth, the rash itself is not contagious, but if the oils stay on work gloves, shoes, tools or skin it can spread. The oil remains volatile even in winter if the plant is bruised, cut or burned. Burning poison sumac is extremely dangerous since the oils can bind to smoke particles and even be inhaled. 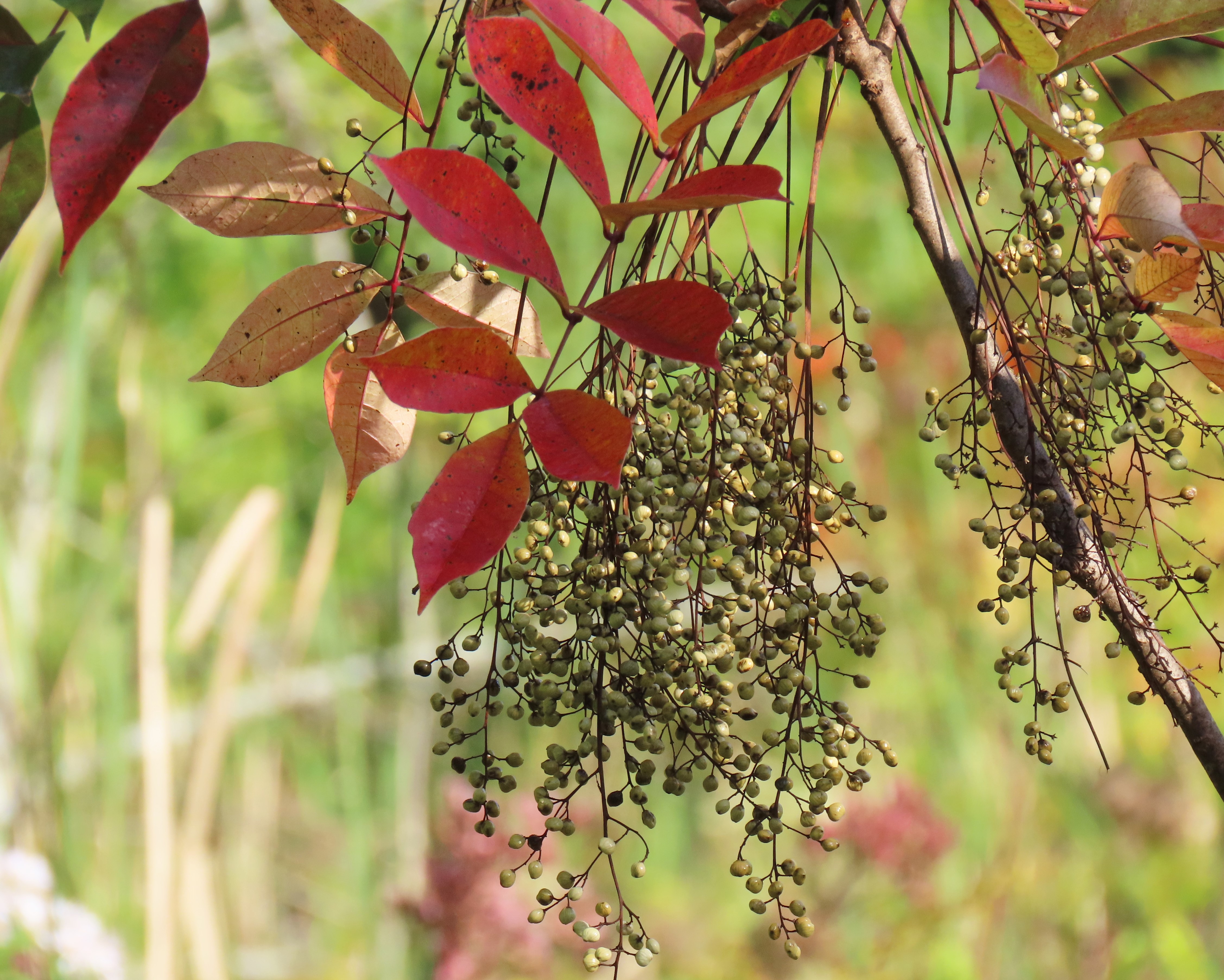 The National Institute of Occupational Safety and Health has excellent information on the hazards of poisonous plants, including poison sumac and the serious danger of being exposed to urushiol when inhaled from the smoke of a fire. This is a serious occupational hazard for wildland firefighters, utility workers and outdoor recreationists and homeowners that unknowingly encounter or burn the plant.

Don’t let the presence of poison sumac stop your awesome autumn outdoor adventures. Arm yourself with situational awareness of this autumn wetland beauty and enjoy the wilder side of Oakland County. Swamps and wetlands are breathtaking in early autumn and I will be doing northern swamp-tromping this weekend with an eye-out for poison sumac and will keep in mind the words of Thoreau, “I enter the swamp as a sacred place.” This time I plan on coming out unscathed, with perhaps a good story to share. 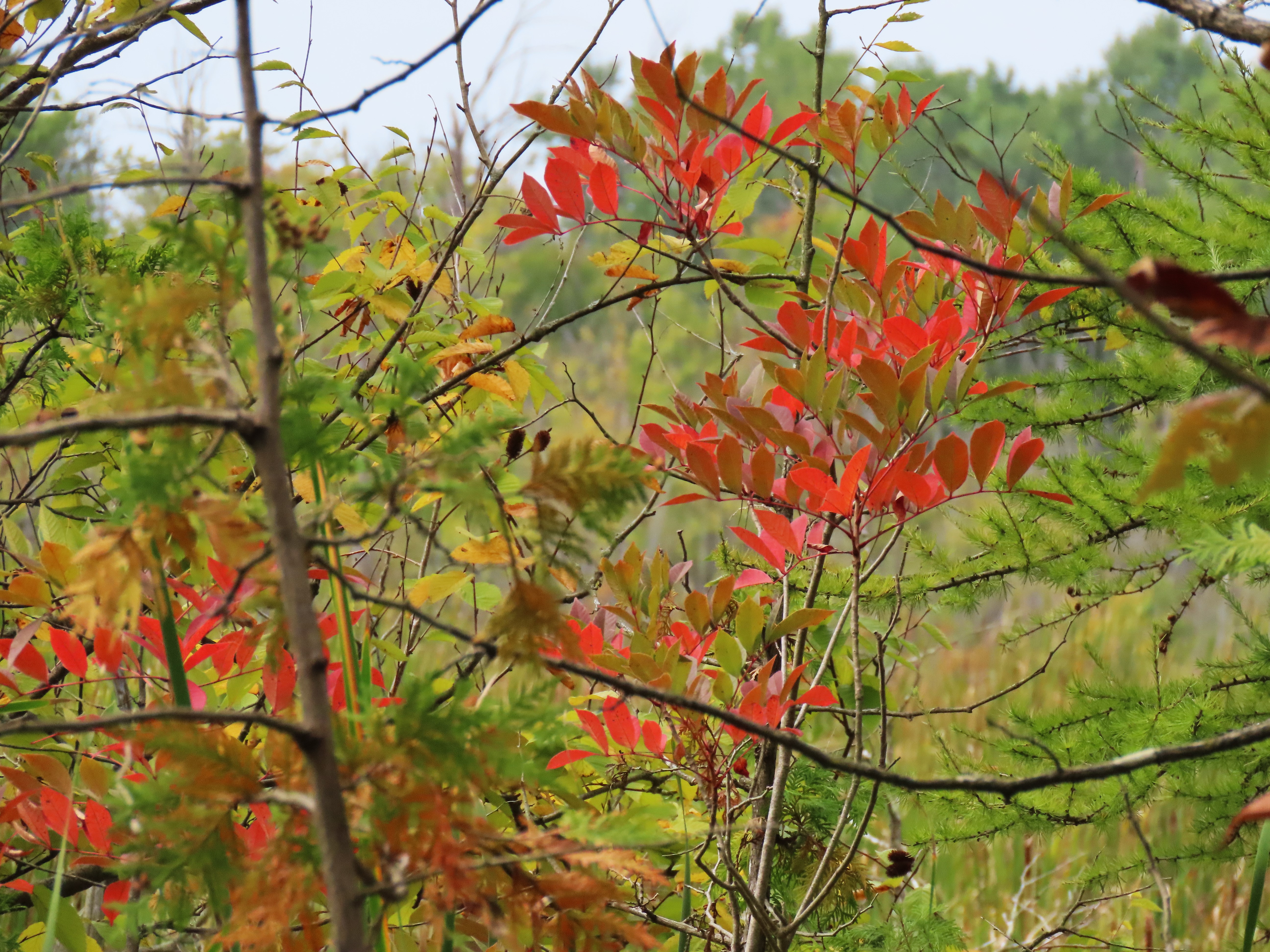 4 thoughts on “Poison Sumac: An Autumn Beauty to Avoid”