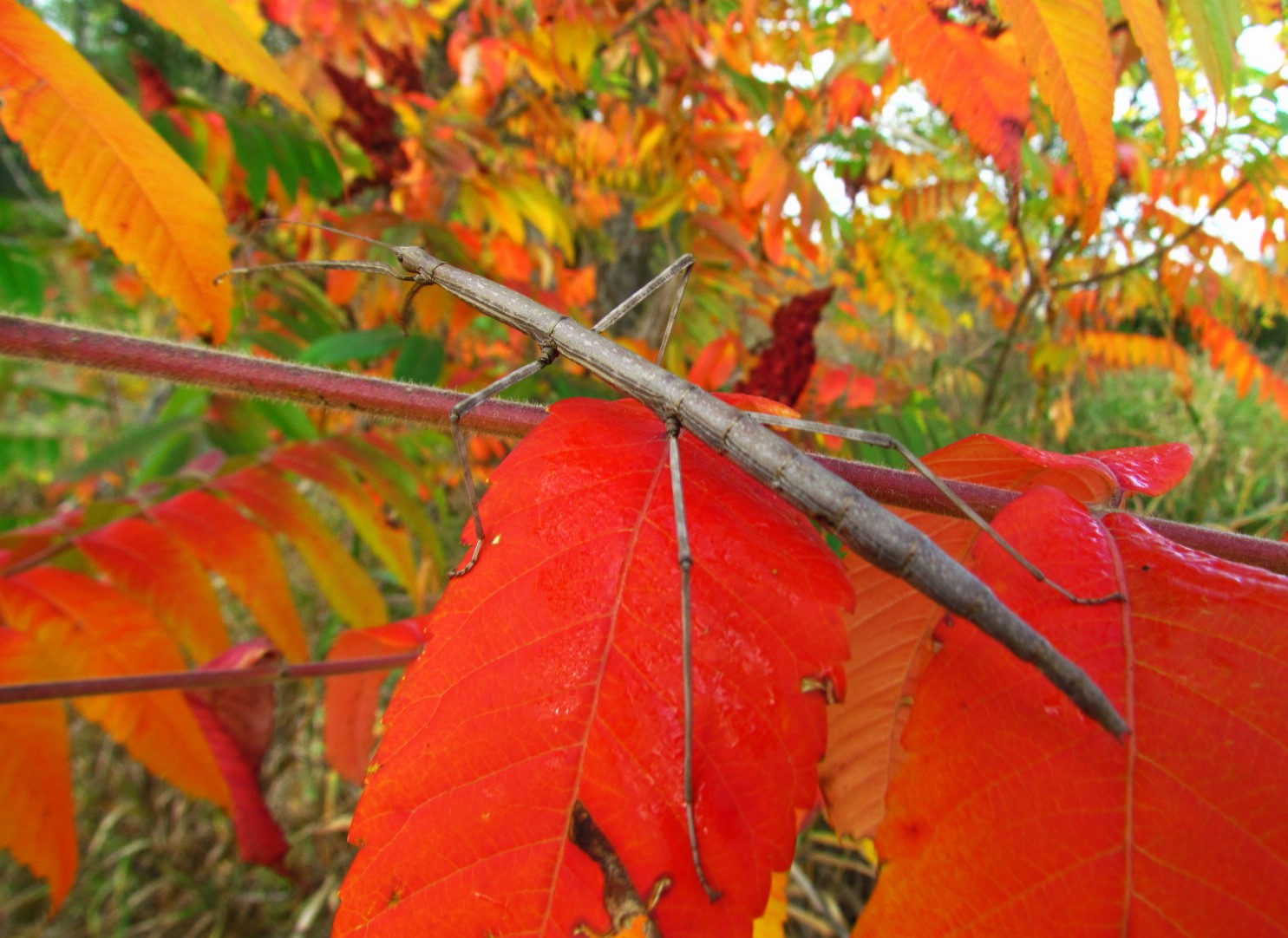 Even with near record-breaking heat earlier this week, the season of encountering six-legged, creepy crawly things is slowly winding down. There are exceptions, and leading the pack of exceptions in Oakland County is the Northern Walkingstick (Diapheromera femorata). These well camouflaged creatures spend most of the summer in the canopy of our oak trees, but as the days shorten they descend to lower levels and surprise encounters become more frequent when they meander onto shrubs, porches, and the sunny sides of homes and outbuildings. 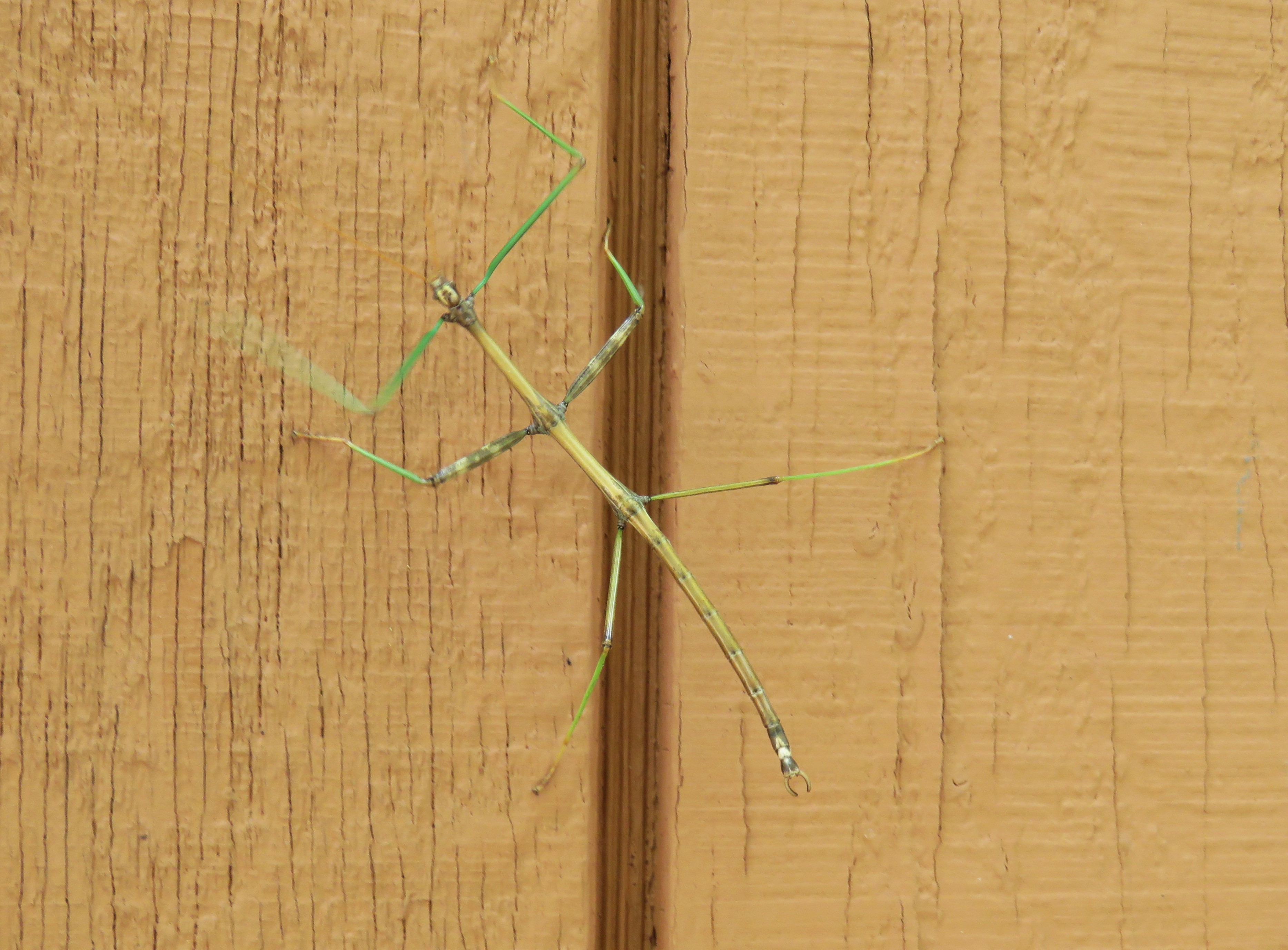 Nature-loving little kids love these peculiar looking insects that appear in viewing range during the early days of autumn, and so do most science teachers, naturalists and, of course, me. And I bet once you get to know one, you will love them too. For they are truly one of nature’s finest creations, a reminder that nature is full of wonder and surprise and sometimes crawls right at our doorsteps. 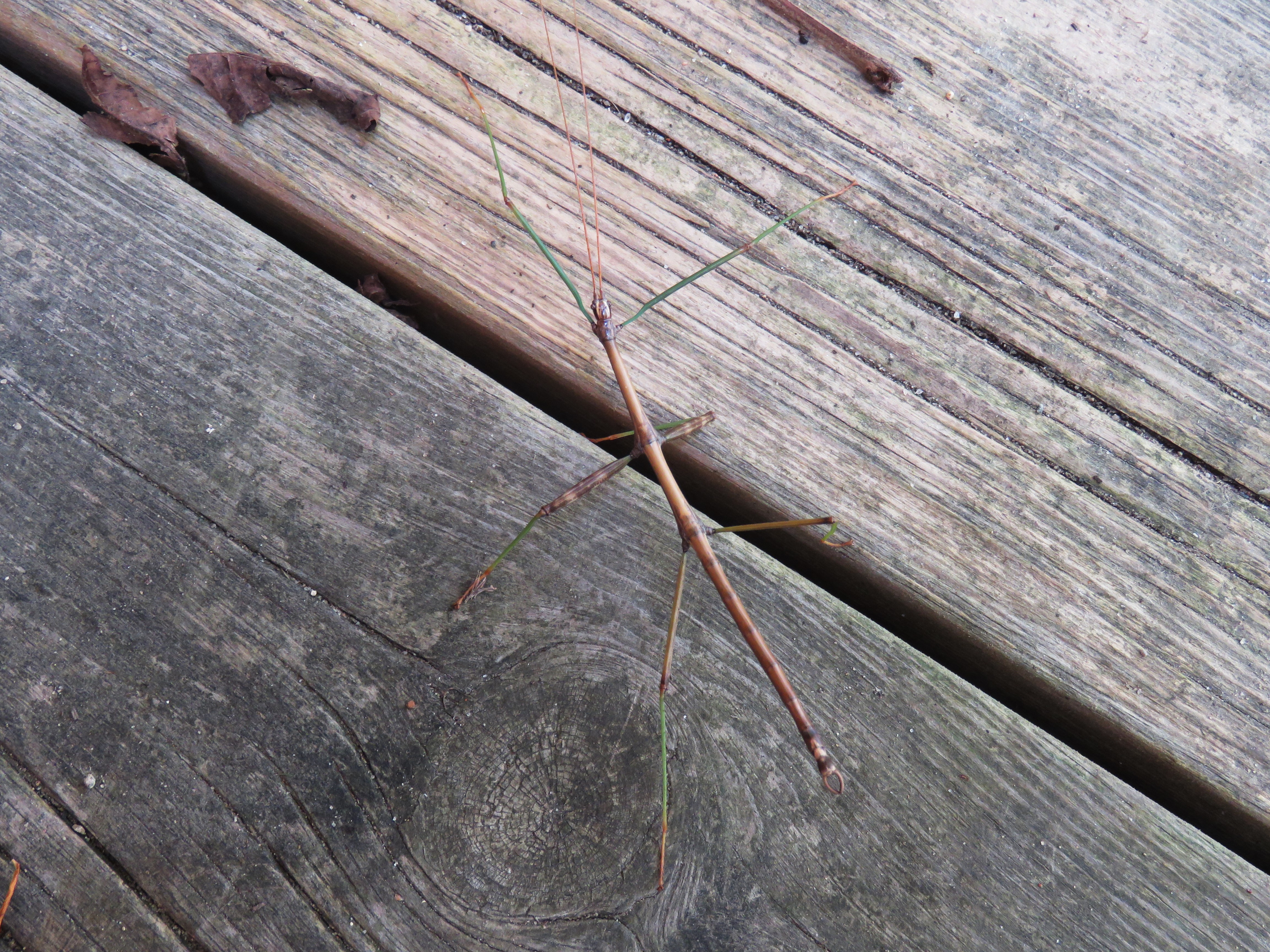 There are about 3,000 species of “stick bugs” living on our planet, but the only stick bug species that is found in Michigan is the northern walkingstick, a true master of camouflage that is referred to as a “world-class hider” because of its ability to practice highly effective “behavioral camouflage.” The word crypsis sometimes appears when researching scholarly literature on these strange looking bugs. Crypsis is defined by Merriam-Webster dictionary as “the ability of an organism to conceal itself especially from a predator by having a color, pattern, and shape that allows it to blend into the surrounding environment.” Crypsis can be used as a predation strategy, such as in the case of the praying mantis: a hunter extraordinaire species that waits in ambush for a meal, and is sometimes confused with our walkingsticks which are herbivores. The walkingstick uses it as an antipredator adaptation to hide in plain sight, appearing more as a stick than a meal. One fact is clear; both species avoid detection by blending into the background so well that they tend to go unnoticed, at least most of the time. But when they are seen, “Oh wow!” moments emerge. 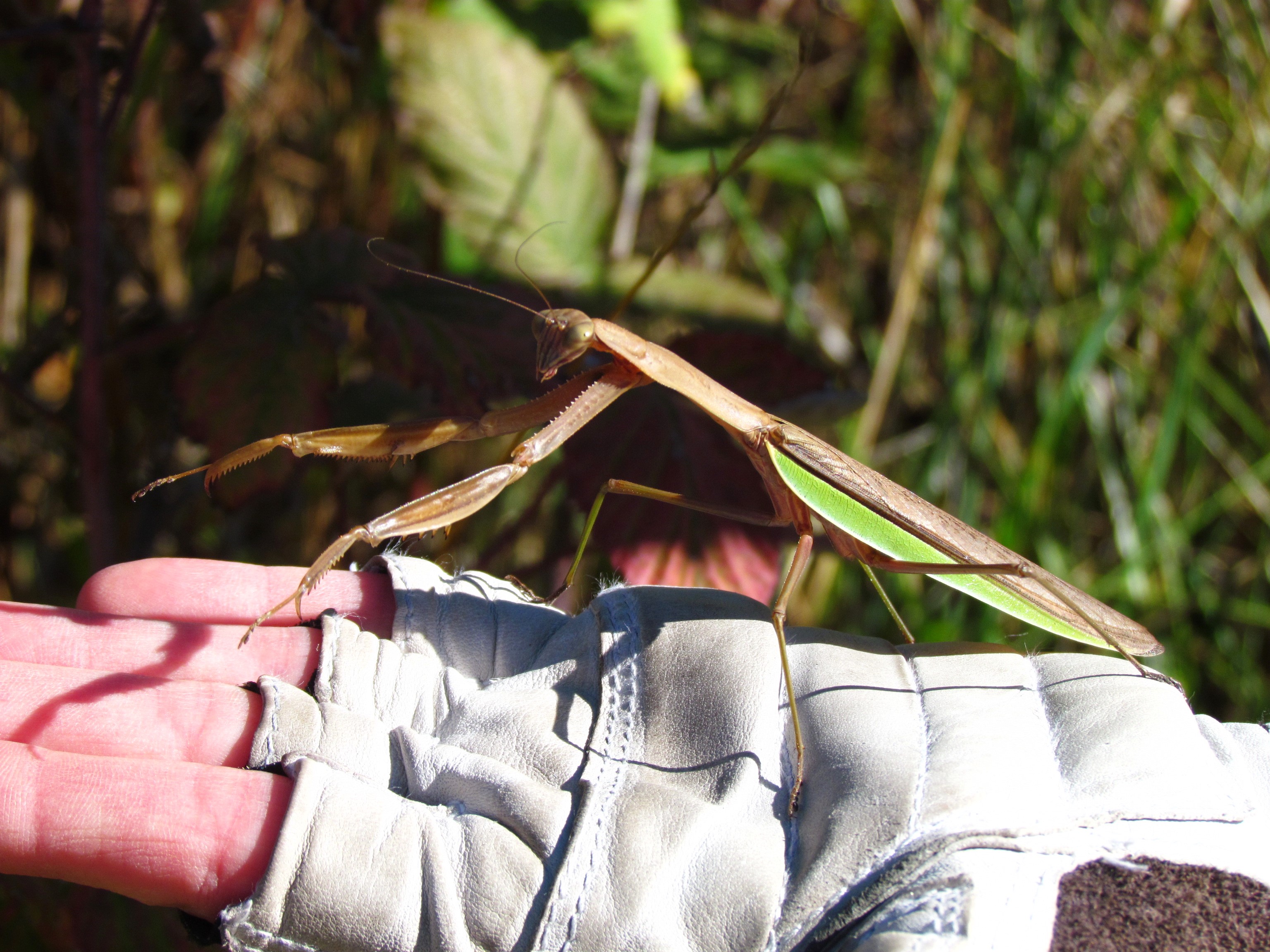 The northern walkingstick uses more than natural camouflage coloration to blend in with twigs, it practices mimicry to avoid detection. Most animals that use mimicry mimic other animals, not plants, but walkingsticks mimic thin sticks. They have three pairs of legs, but when at rest in the trees, the front pair of legs is extended forward beside the antennae, forming a realistic looking twig-like extension, which increases its ability to avoid detection by creatures like birds that hunt mostly by sight. I witnessed that behavior in the palm of my hand when I picked one up and placed it on my hand. It quickly “flipped” the front pair of legs forward next to the antenna and froze in place. I suspect it was trying to tell me, “I’m not here. I am not a bug. I am just a stick.” 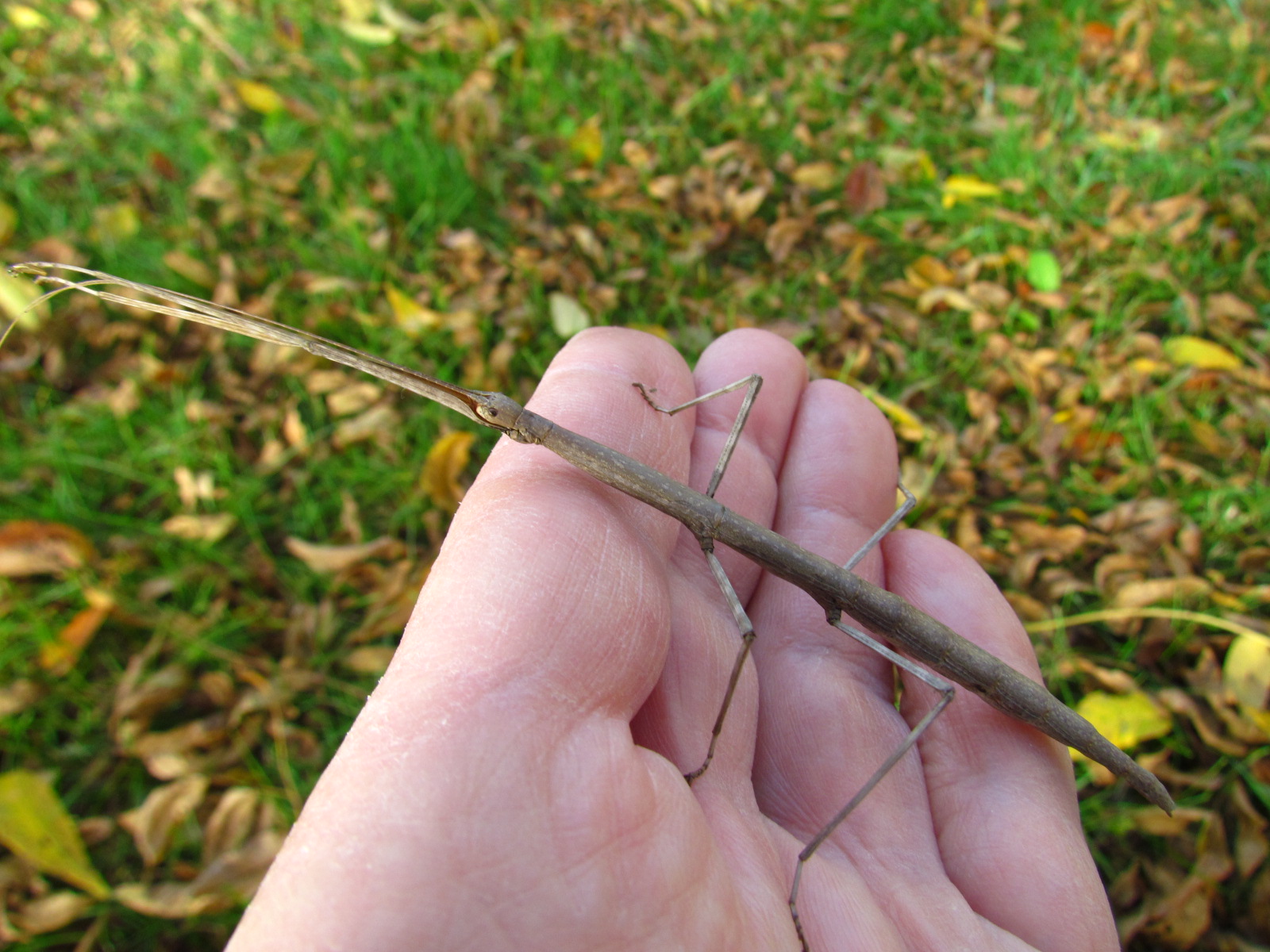 It held that pose just long enough for me to capture a photo before it jumped off my hand and scurried across my porch, revealing another behavioral secret I had been unaware of. It may be called a walkingstick, with the emphasis on “walking,” but they have the ability to run, and run very fast, as I documented in this short clip on my wooden porch in rural northern Oakland County.

As leaves fall, the season of feasting fades for the walkingsticks that had consumed prodigious amounts of leaf tissue. The Animal Diversity Web of the University of Michigan Museum of Zoology confirms that it is not just oak leaves that walkingsticks feast on.

“Northern Walkingsticks feed on the foliage of trees and shrubbery. They are particularly fond of oak and hazelnut trees. They are herbivorous and have mandibles to cut pieces of the leaves, stems or flowers. Newly hatched nymphs tend to feed mainly on hazel (Corylus americana) and black cherry (Prunus serotina), but in environments where these plants are not in high abundance they tend to eat white oak (Quercus alba). They have also been noted to consume sweetfern (Comptonia peregrina), various strawberry and blueberry plants, and beaked hazel (Corylus cornuta), from the time frame of May to mid-June. The nymphs eat by consuming all but the major veins of a leaf. Adults tend to feed primarily on black oak (Quercus velutina) at all times of the day, but peak feeding activity was found to occur at 9:00 P.M. to 3:00 A.M., and their feeding habits tend to include feeding on a single leaf for quite some time, stop, move about, and then begin feeding on another leaf. They are leaf skeletonizers.”

Predation on walkingsticks continues as leaves change into their autumn colors. They are hunted by squirrels, eastern chipmunks, turkeys, songbirds and bats. Bats are perhaps the most successful hunters of our walkingsticks, for bats are well equipped to overcome camouflage and mimicry, and walkingsticks are active at night when bats are feeding. Bats are not hampered by their camouflage since bats hunt by echolocation rather than sight and aren’t fooled by their stick-like appearance. A hungry bat sends out sound waves that “bounce off” the moving walkingstick instantaneously providing the bat with enough return information to swoop in for an easy meal.

By the time pumpkins are laced with heavy frost, walkingsticks will be gone, but another adaption of this insect assures a new generation next spring. The University of Wisconsin in Milwaukee explains their life cycle this way:

“Northern walkingsticks reproduce when they mature in late summer/early fall. As females negotiate the treetops in early autumn, they drop eggs (about 150) that free-fall to the ground and overwinter in the leaf litter. Their eggs mimic seeds, which may offer some protection from parasites. These will hatch in spring—or in the one after that—although if the winter and spring have been especially dry, the egg will not soften enough to allow the nymph to emerge. According to the Forest Service’s Forest Insect and Disease Leaflet #82, “As the cycle in the north is 2 years long, even-year and odd-year broods have developed. In some localities both broods are nearly equal in numbers, but in others they are unequal. For instance, in Minnesota even years are “off years,” while in Wisconsin and Michigan odd years are “off years.”

As I delved further into a variety of literature, an amazing factoid appeared in various forms: the role some species of ants play in assuring new generations of northern walkingsticks. As it turns out, the eggs that “free-fall” to the ground resemble seeds and when some species of ants find the eggs, they carry them off to their underground nests and dine on the outer protective layer, without eating the embryo within. I am not an entomologist by any means and uncovered some conflicting information on this process, but am confident it occurs. The eggs remain safe underground and in spring after the weather warms up, tiny new walkingsticks emerge unseen and climb for the treetops as a new cycle of life begins. 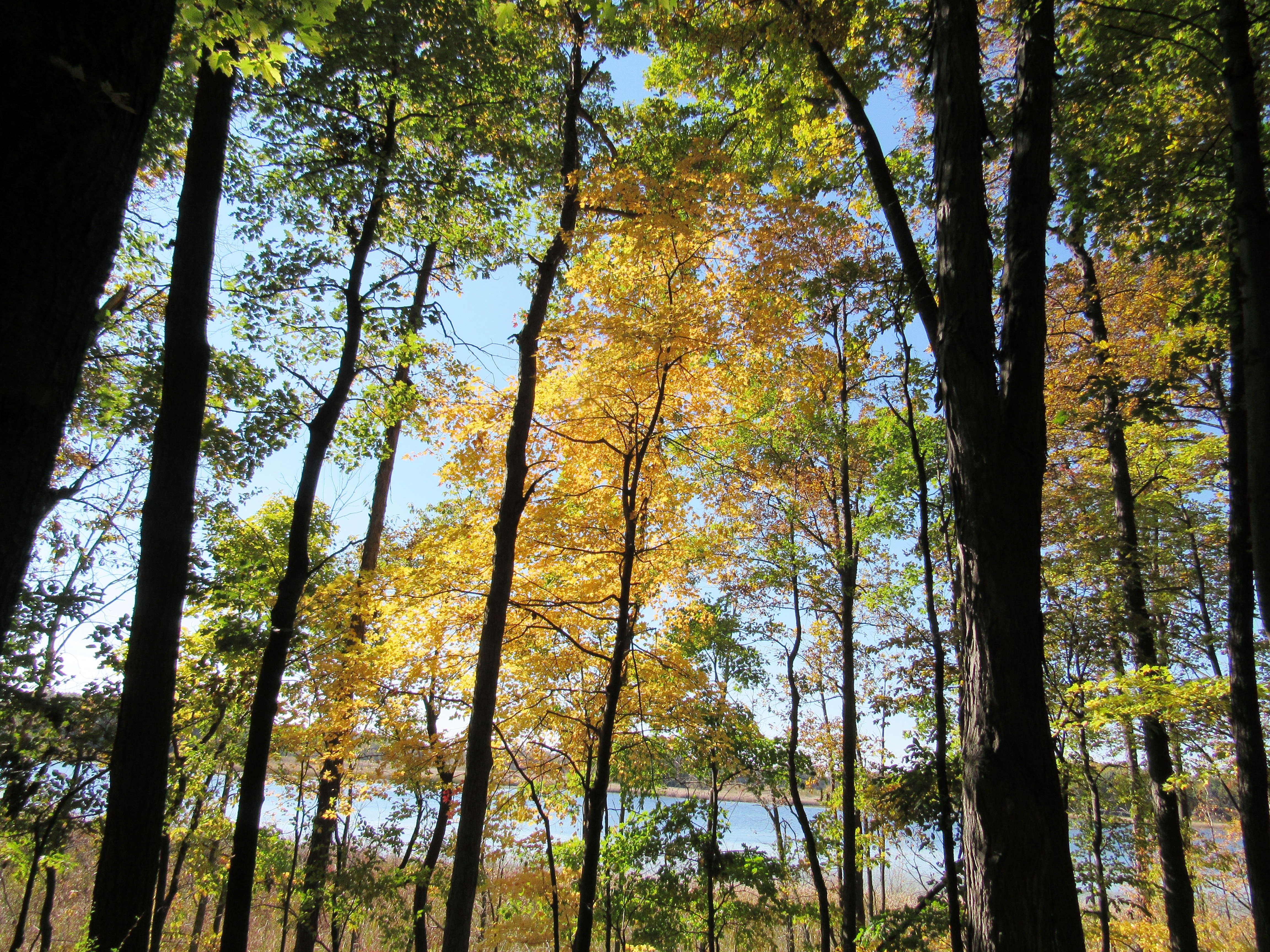 “Where does one look for walkingsticks in these early days of October?” “Anywhere and everywhere, but most encounters are not planned, they just happen” would be my answer. All the images I shared were accidental encounters from late in September. One walkingstick was perched on the railing of my porch, another was motionless on the sunny south wall of my freshly painted, but very old weathered garage, and the third one I stumbled upon as it crawled on shrubbery at the edge of my woods. It was those encounters that inspired me to share the tale of these wondrous six-legged creepy things that are very much at home on the wilder side of Oakland County.