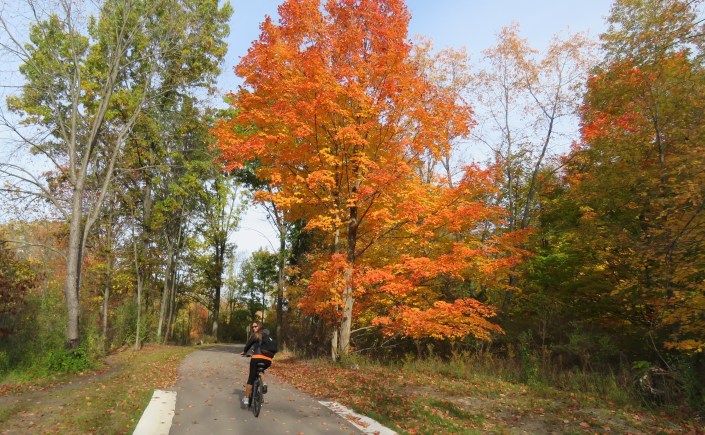 October, the golden month, has almost arrived. It’s also the month we should not forget the need for situational awareness. A few years ago I failed miserably at practicing situational awareness, and things could have ended badly for me. Keep reading for that informative misadventure. I’ll also share a few words on poison sumac, Eastern massasauga rattlesnakes, and weather awareness.

I’m well into my third season of beekeeping, and with the calm and rational assistance of my beekeeping partner, harvesting honey is fun and easy. We have a ‘high-tech’ beehive called a flow hive. Harvesting honey from the hive is almost as easy as turning on a faucet. Unlike traditional hives, the frames from a flow hive are not removed and placed in a device that spins to extract honey. A special tool is inserted into a slot on the back of the flow hive and turned 90 degrees to activate internal mechanisms that let honey enter tubes and then flow into collecting jars.

We’ve harvested twice before without any issues. Note my reference to the word “we.” This year I was going to do it alone, which was probably not the smartest idea, since I have been rightfully accused by my beekeeping partner of rushing into things. She thinks and plans before she acts. I sometimes forget the thinking and planning part, and should have waited a few days for her.

I did a quick inspection via the hives viewing ports and everything looked great. It’s important to mention that I was just wearing shorts and a T-shirt, not my bee suit that covers me from head to toe. I did not see a real need, since the frames that hold the honey and bees are not removed from the hive.

Flashback to two years to grasp the error that was about to occur: On an action-packed incident day, I accidentally disturbed a yellow jacket nest while removing a rotted log from the edge of my driveway. In a matter of seconds, I acquired seven yellow jacket stings. Thirty minutes later, out of an abundance of caution, I drove myself to McLaren Clarkston Emergency Center. I work there as an ER paramedic. Driving was not a smart idea—I should have called emergency medical services, just in case things went south quickly. EMS units carry epinephrine and would have started treatment on the route to the hospital.

Being on staff, I went around to the back of the building and used the entry code to open the staff door entrance. The moment a nurse saw me walking in, I was hurried to a room, since I was now visibly having a reaction and was sweating. I was quickly deemed a priority patient. About four hours later, I was discharged after getting an IV followed by epinephrine, solu-medrol and Benadryl. I am extremely grateful the on-duty doctor also gave me a lecture, and prescribed spring-loaded epinephrine pens for me, just in case I was developing a sensitivity to venom. I thanked the ER doctor and kept the EpiPens with my beekeeping supplies as promised. I knew I would not need them. I was wrong.

So, two weeks ago I had plans to extract about a half-gallon of honey while wearing a T-shirt and shorts. My attire was not wise, knowing that honeybees can be increasingly defensive in autumn to protect their honey. I knelt down next to the hive for a close look and got a single sting on my leg from a yellow jacket that was also looking for honey. “No big deal,” so I thought. A few minutes later I felt “funny.” I went back to the house and noted the palms of my hands were turning red. A full length mirror showed that same color change on my belly and thighs. I knew that was not good, and I knew it was about to get worse without rapid intervention. I opened up my emergency sting kit and jabbed the “just in case” spring-loaded epinephrine auto-injector needle into my thigh with one hand and filmed it holding my phone with the other.

That was followed by washing down 50 mg of Benadryl with tea that was sweetened, aptly enough, with honey. I am very grateful to my friends and coworkers at McLaren that reminded me of the need of situational awareness, in this case, having an EpiPen. I safely extracted the honey two days later. It’s excellent honey!

One of the most beautiful plants of early October is poison sumac, a species sometimes confused with staghorn sumac. I once witnessed a family on the wetland boardwalk at Independence Oaks County Park – North collecting “pretty red leaves” for a school project. I advised them it was poison sumac and walked with them to show them a few staghorn sumacs. There are visual and habitat differences between the two different sumac species. Poison sumac grows in wetland and swamps and staghorn sumac, also known as red sumac, thrives in dry soil. Both species develop red leaves in autumn, however, the berries are totally different, as are the stems. Poison sumac has tiny yellow-white ‘fruits’ that dangle downwards, while red sumac has a large cluster of fuzzy, red seeds that point upwards. I have no doubt that encounter will lead to their increased situational awareness. Do you know the difference?

Several times a year I am asked if we really have rattlesnakes in our county. The Eastern massasauga rattlesnake is our state’s only venomous snake. They are a rather reclusive, wetland-loving snake and are seldom seen. However, chances of encountering them increase in early October because they sometimes bask in the sunlight on trails. I am lucky, having seen them in the wild three times. Once at Indian Springs Metropark, once at Stony Creek Metropark, and once at my most visited location, Independence Oaks County Park—the location where I filmed the following video. The only situational awareness needed is to leave them alone and they will return the favor. By the end of October they will have slithered down into moist crayfish burrows for a long winter nap.

Thunderstorm frequency decreases dramatically in autumn, but they can still form rapidly. It should go without saying that the words of the National Weather Service should never be taken lightly. They empathize “If Thunder Roars, Go Indoors,” and their website states that “lightning kills about 20 people a year in the United States and hundreds more are injured. Some survivors suffer lifelong neurological damage.”

The weekend is here and the mosquito-free month of October is a grand time for leaf-peeping, fungi-finding and hiking. Or perhaps go cycling and explore the wonders of the wilder side of Oakland County.  Just don’t forget to pack your situational awareness. And now into the woods I go, with EpiPens in my day pack—just in case.