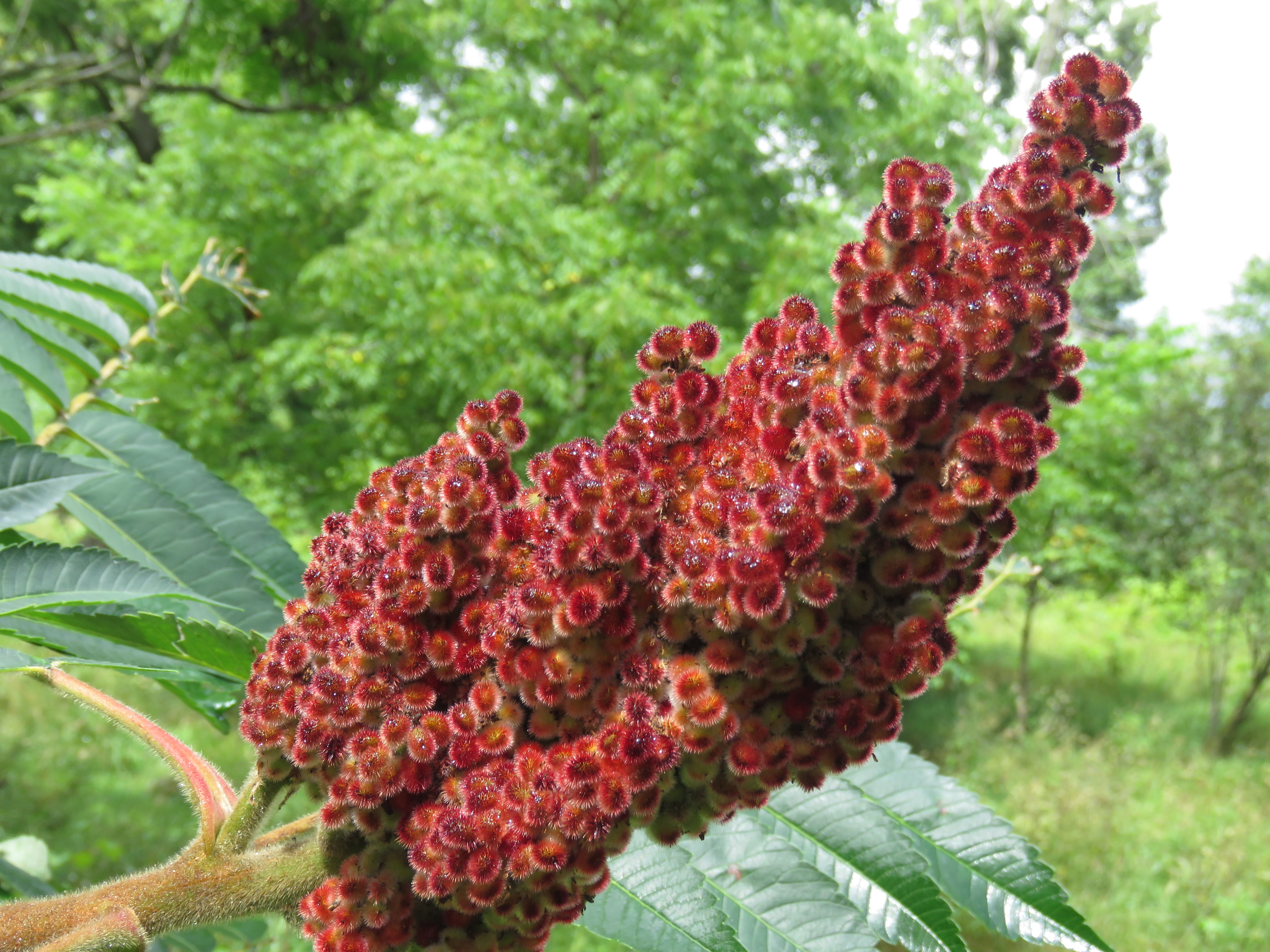 It was late summer in the rolling hills of Western New York State when I came upon the sun-soaked field of staghorn sumac that accelerated my path of nature education after a near stumble. Back then I was a long-haired, bearded 20-year-old. I was happy to be the nature specialist for Camp Lakeland during my summer break from college, but I was even more excited to share “nature’s lemonade” with kids on their hikes. My hair is a lot shorter now, but my foraging enthusiasm remains. This little flashback to Camp Lakeland is necessary to set the stage for this tale from the wilder side, for in the world of nature all things are connected. 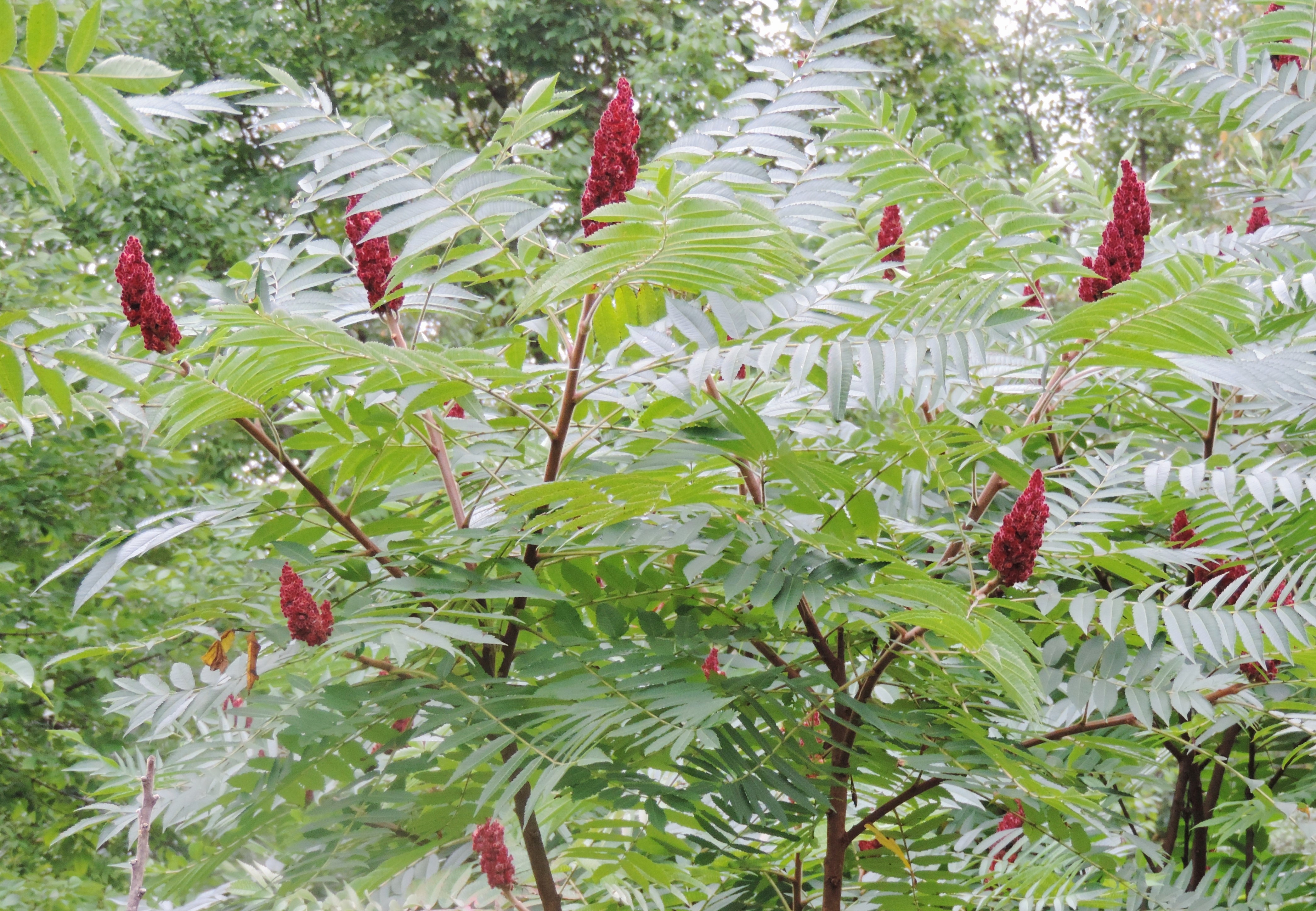 Those kids and I gathered the conical-shaped, fuzzy red seed sumac clusters. My instructions to that small group of campers were very clear. I said something along the lines of: “Break off a few red seeds and put them on your tongue. They taste like lemonade.” A few seconds slipped by on that long ago summer day before one camper squealed in distress.

“What’s moving?” was my puzzled response. She proceeded to spit a few seeds and a small squirmy bug into the palm of her hand. 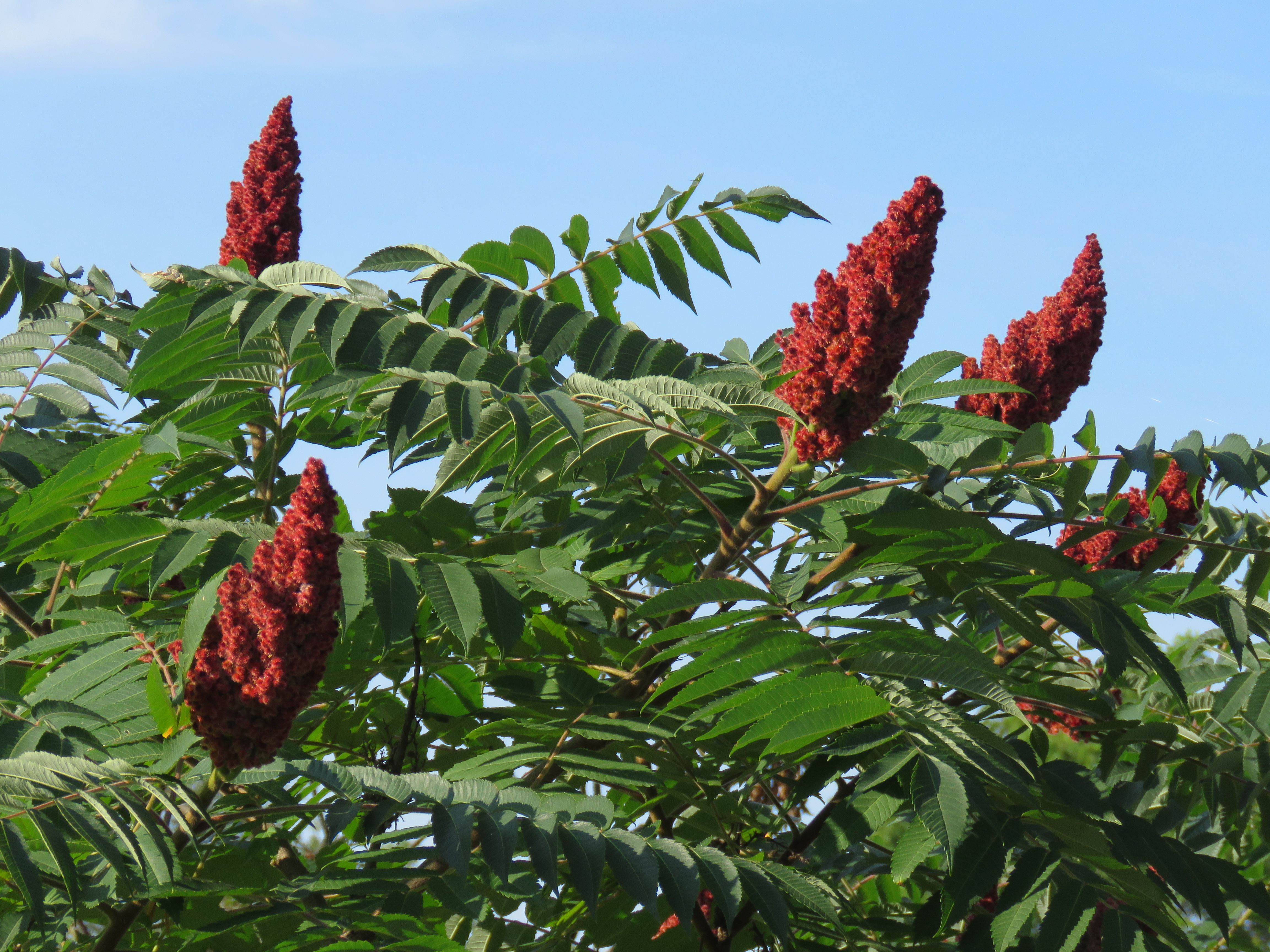 That incident taught me something. Always tell both youthful foragers and adults to look closely at that fuzzy red conical cluster when preparing to sample a sweet, yet sour drupe, which is the proper name for the sumac seeds: the ingredient to create Vitamin C-rich sumac-ade. My misadventure was not over.

Later that day I was summoned to the Camp Director’s office. He met me at the door in what I vaguely recall as a state of terror. The campers had shared the story of that delightful bug-on-the-tongue adventure with him. He thought it was funny too, until he heard the word “sumac.” After a few minutes of lively discussion with me, during which I feared banishment from my first paying nature-related job, I was able to convince him that the campers would live. All that the director knew before our chat was that sumac was poisonous and that this tree-hugging hippie from college, who he had just hired, had encouraged ten kids and their 17-year-old junior counselor to taste a seed and then wanted them to drink a poisonous potion. I explained that staghorn sumac (Rhus typhina), sometimes known as red sumac, is not the same as poison sumac. They bear little resemblance to each other except for part of a name, green leaves in the summer, and roots in the ground. Perhaps that’s how my nature education career really began. I was invited to return the next summer.

Poison sumac (Toxicodendron vernix) is poisonous in the same sense as its “cousin” poison ivy. If someone makes contact with the leaves, vines or berries of poison sumac they might come down with what medical professionals call “contact dermatitis.” A severe, itching rash is likely. There is no way to confuse the two species. Staghorn sumac has fuzzy conical-shaped clusters of seed that point up to the sky. Staghorn sumac is a colony-forming, rapidly growing, tree-like deciduous shrub with crooked, leaning trunks, picturesque branches, and velvety twigs. Poison sumac produces small individual whitish-yellow berries that dangle down. That is the most obvious difference for a novice. Both species are common in many of our parks and wildlands, but their precise locations differ greatly. Poison sumac thrives in wetlands. Staghorn sumac favors open, sunny, and dry areas and often grows in great clusters on roadside hills, or in the zone between a meadow and the woods. Both plants have leaves that turn a deep, beautiful scarlet color as summer fades into autumn. As for the name, Staghorn sumac is named for its soft velvet-like covering on its new growth branches, resembling the antlers of buck in summer velvet.

Those fuzzy seeds reach their zenith of flavor in the waning days of August. That means its harvest time for those who want to make a delicious natural tea from the seeds of Staghorn sumac. I’ve been making that tea for a long time, but I never even thought of eating wild plants, tasty roots, and strange berries until I fell head-over-heels in love with nature classes and the concept of foraging as a student at Goddard College in Vermont. It was there, prior to my summer experienced at Camp Lakeland, that I was also smitten with the writings and rambling of Euell Gibbons in his classic: Stalking the Wild Asparagus: a 1962 classic that included information on staghorn sumac. 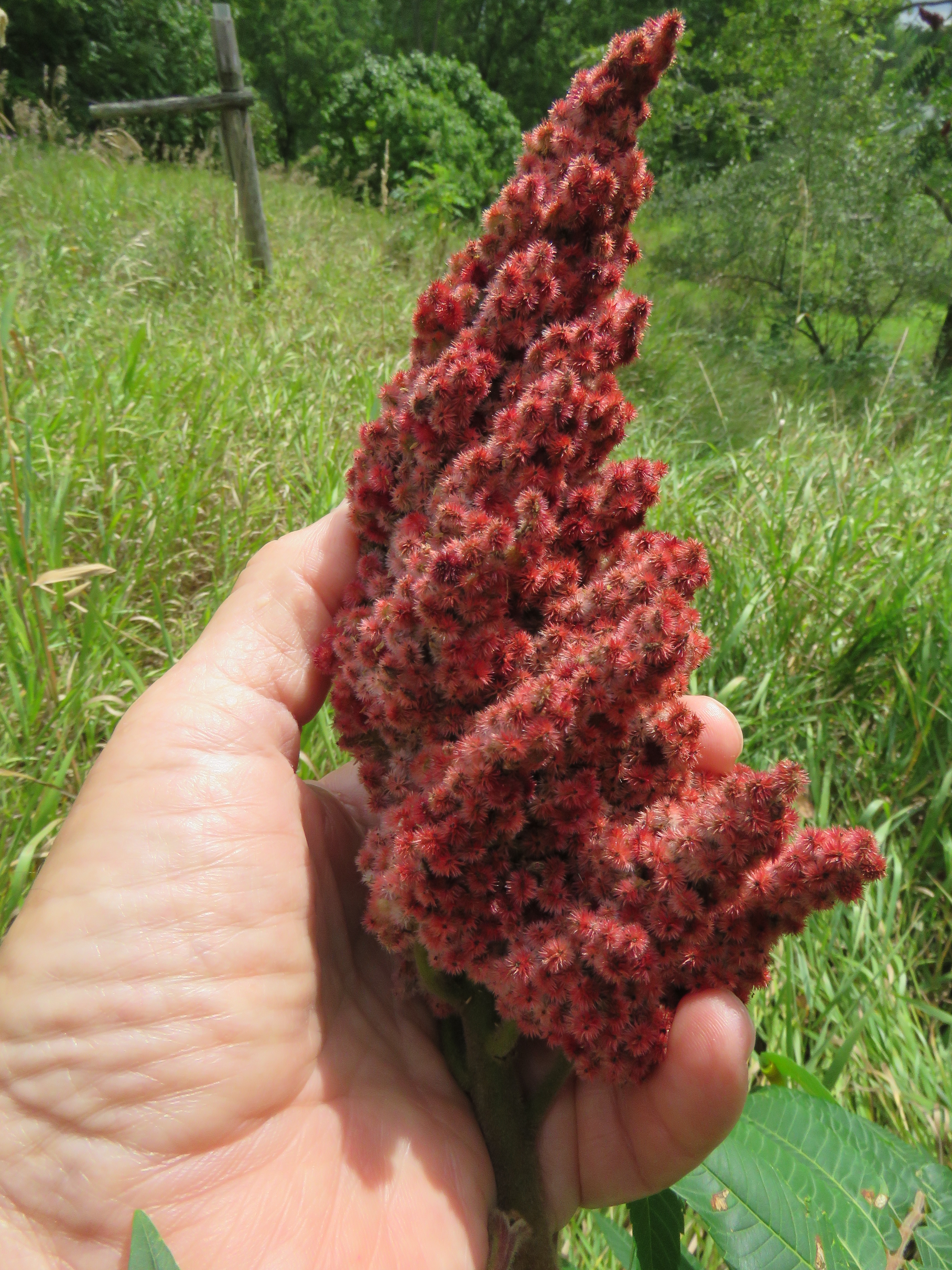 Sumac-ade has increased in popularity and is explained in detail in many modern books on foraging. One of my favorites, it is very applicable to many wild plants found in Oakland County, is Backyard Foraging by Ellen Zachos. Here’s some of what she says about staghorn sumac: “Timing is everything. Sumac berries get their lemony taste from a combination of acids that coats them. This is washed away by rain, so gather your sumac as soon as possible after the berries ripen. Dry whole cones by placing them in a paper bag and hanging them somewhere in dark for two to four weeks, and then store them whole in a glass jar and use as needed.” 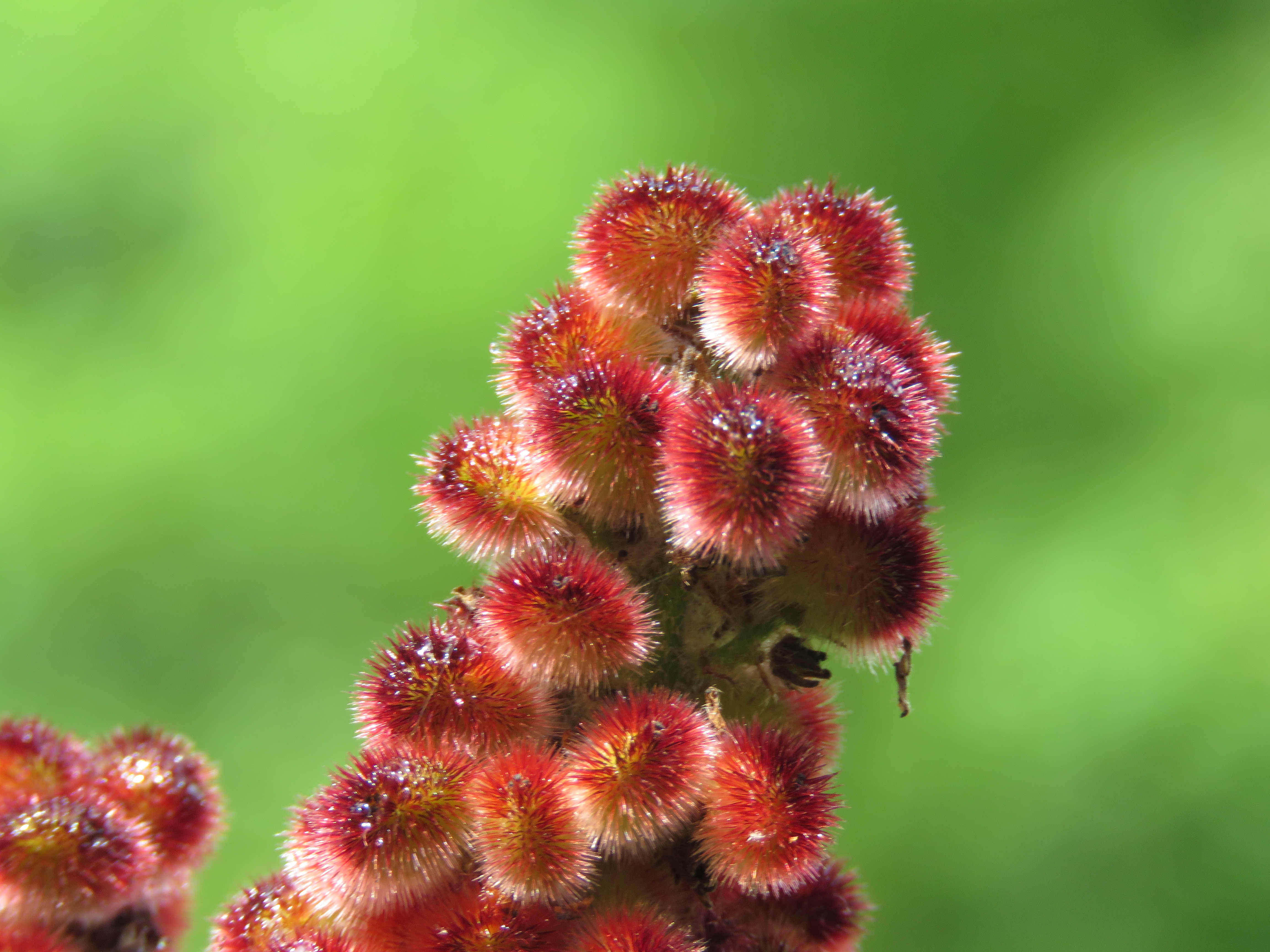 Her sumac-ade method is simple: “Break apart several cones of berries and let them soak in a pitcher of water until the liquid turns pink. Taste periodically for sourness. Cold brewing takes longer than hot brewing (hours vs minutes) but produces a tastier beverage.” Although she states to strain after the sumac-ade is ready, I suggest breaking apart the clusters before soaking to check for hidden bugs or beetles and then to strain afterward to filter out the tiny fibers that are attached to the seeds. Her process of cold brewing can be greatly accelerated by following the common method of making sun tea. Two hours in the direct sun should be sufficient. If you simply want to make a cup of hot sumac tea, a heaping tablespoon of those fuzzy seeds should do the trick. Regardless of the method used to create nature’s best lemonade, honey is the best sweetener. 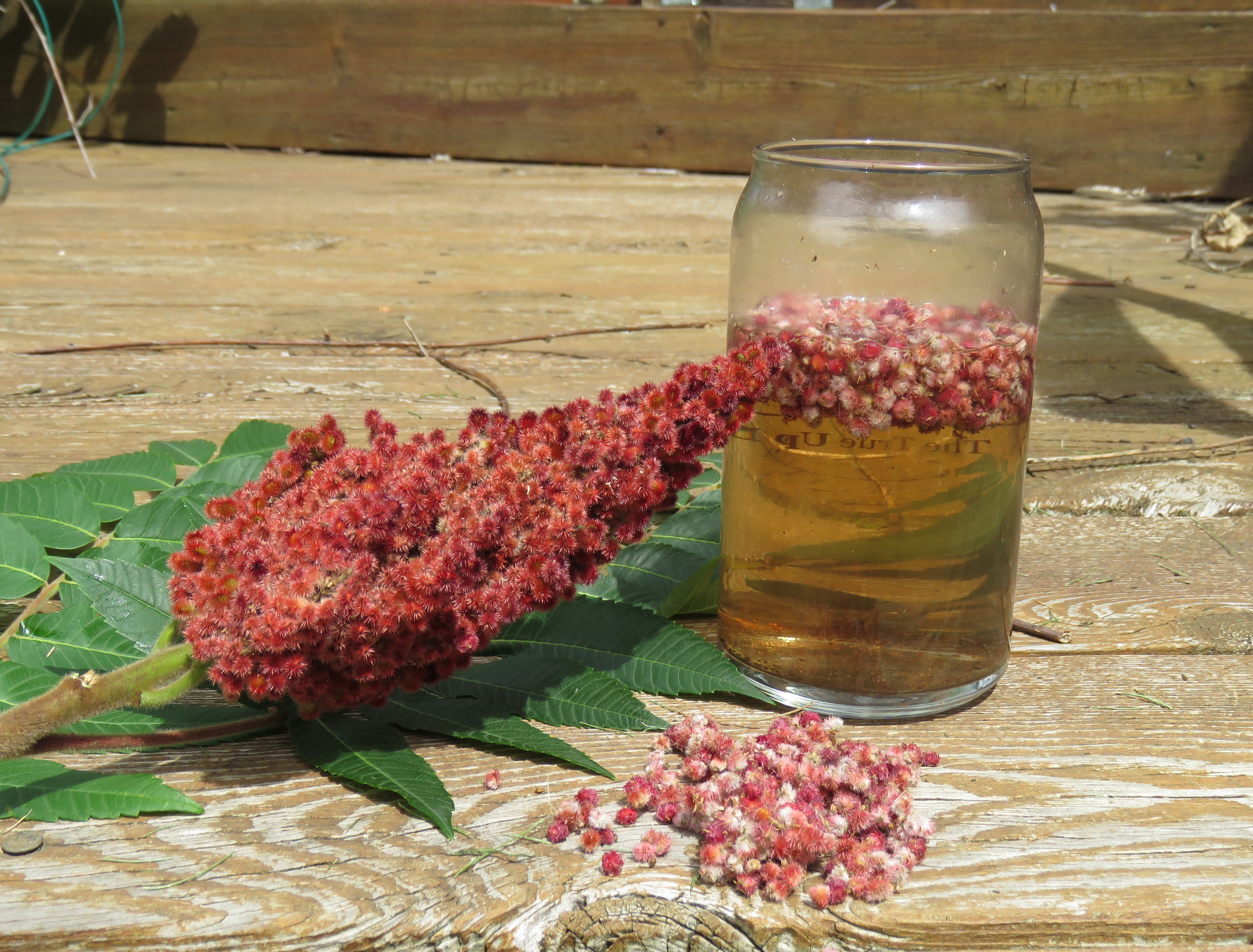 As most chefs and culinary pros know, sumac seeds are gathered and ground as a key ingredient in Za’atar, an aromatic spice that originated in the Middle East and has found its way to our shores and taste buds. This video link shows how to make it. It’s easy! 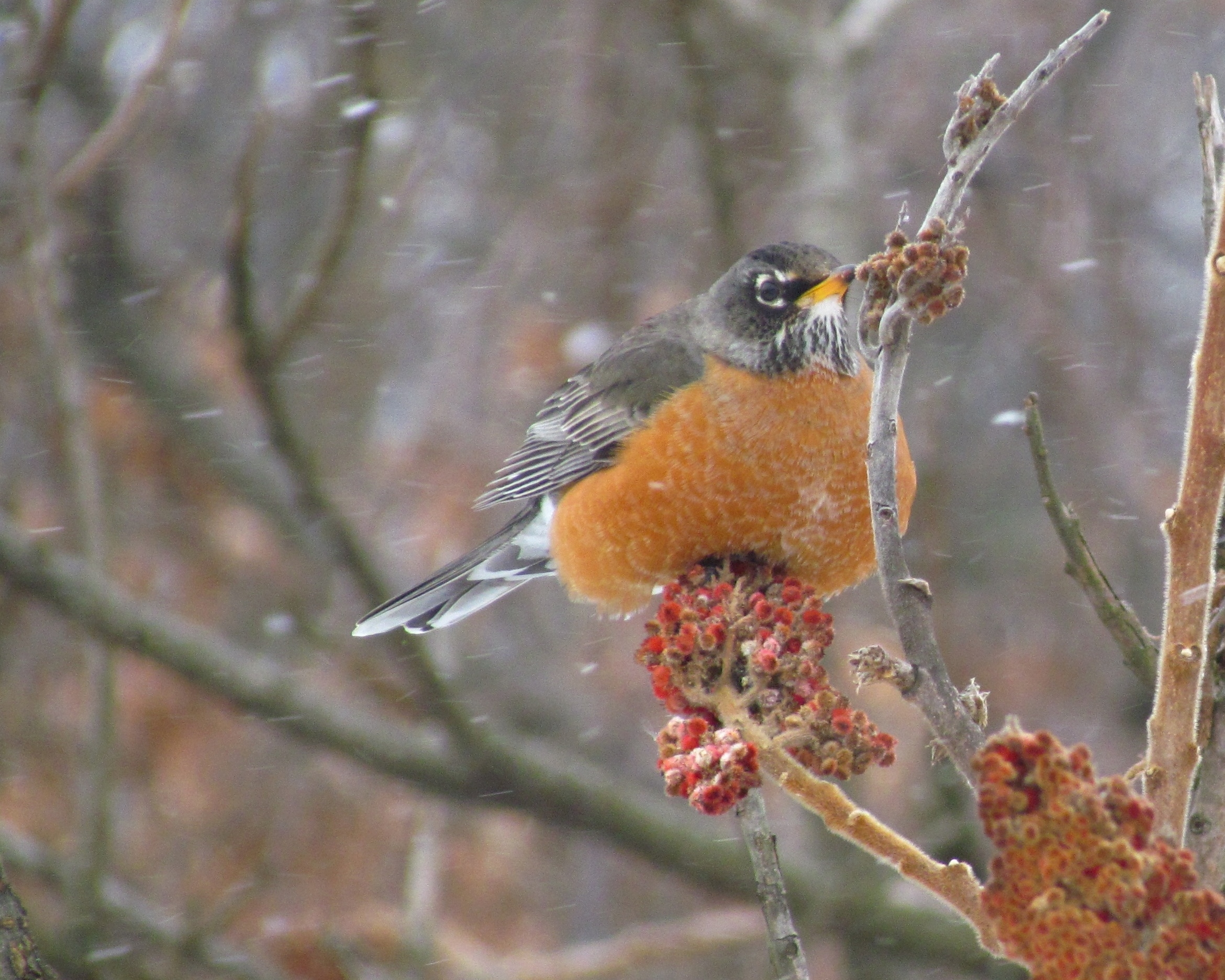 Now is the time to gather your sumac. By the time autumn takes hold and the leaves of sumac turn red, the competition for this tree-like shrub that thrives on the roadsides of Oakland County accelerates. Dozens of species of local birds feast directly on the seeds, especially as other food sources diminish. Among the species that feed on the berries are Eastern Bluebirds, Catbirds, Wild Turkeys, and Ruffed Grouse. Woodpeckers and nuthatches also tear at the clusters in search of hidden meaty morsels, and once snows begin to swirl, wintering American Robins join the feast, and then its game over until next summer on the Wilder Side of Oakland County.

One thought on “Palate Pleasing Secrets Of Staghorn Sumac”