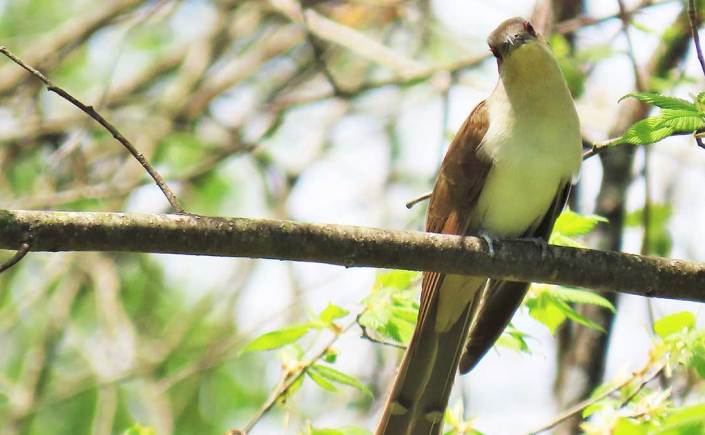 You must have the bird in your heart before you can find it in the bush.” – John Burroughs Locusts and Wild Honey, (Burroughs, 1895)

I never knew Black-billed Cuckoos existed until a few hours after an early evening encounter near the end of May, and that’s where this bird tale begins. First, however, I must establish I do not qualify as a “birder” by any means. I have no interest in creating a life list of bird species I have seen, but I take great pleasure in watching Ruby-throated Hummingbirds at the feeder and listening to the cheerful song of House Wrens nesting in my arbor.

The Cuckoo encounter, a most memorable journey into nature’s way, was totally unexpected. I was meandering along the edge of my woods in northern Oakland County, heading to a pond I frequent almost daily with the sole purpose of doing nothing except relaxing and thinking – two actions that work best when disconnected from technology. I’ve also developed a habit of observing when I hike, part of my never-ending journey into nature’s way. I define “observing” as detecting unexpected movements, sounds, or shapes that seem out of place.

A sudden flutter of wings activated my observing mode, but since I was walking westward into the glare of the setting sun, all I could tell was that a bird landed on a limb about 40 feet from me. In the poor light conditions, I looked through the camera’s viewfinder to get a clear photo and saw that I had a mystery on my hands. This bird looked very different. I managed one photo before it was gone. At first, I thought it might be some sort of flycatcher, but a closer look on my computer screen left me baffled. I sent the image to a few avid birders and they both responded back quickly with almost identical wording. Besides identifying it as a Black-billed Cuckoo they added, “Where were you?”

Black-billed cuckoos are not rare, nor are they an endangered species. They are, however, seldom seen even by the most committed bird watchers, the kind of folks who will travel hundreds of miles to add a new bird to their life list. Even I became excited about the uniqueness of my sighting after reading about them. According to ornithologists at the Cornell Lab of Ornithology, the Black-billed Cuckoo is one of North America’s most elusive birds – a seldom seen beauty that is graceful in flight, but also secretive and sly.

Tent caterpillars are a favored meal of the elusive Black-billed Cuckoo and my sighting was near young black cherry trees with tent caterpillars. My excitement increased when I listened to an audio recording of their songs, a song I have heard multiple times before in the same area but could not identify. Even now, as I wish for another cuckoo encounter in my corner of the wilder side of Oakland County, its name still sounds like something wonderful out of a child’s colorful cartoon book.