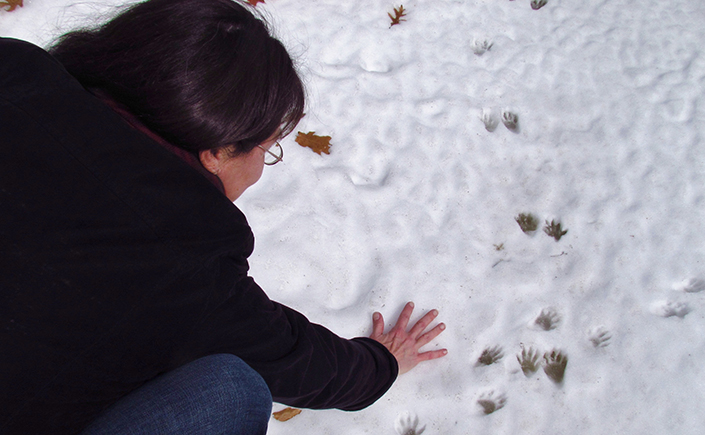 Which way did the rabbit go? That was perhaps the wildlife tracking question I enjoyed using the most when I first came to Michigan and worked at the nature center of Cranbrook. Over three decades later, “when rabbit tracks appear in snow” is still my favorite trailside introduction to stir excitement in children – and their parents. Rabbits bound between shrubs and brush, and when a rabbit bounds (they don’t “walk”), they land with their hind feet side by side and their front feet behind their back feet, with the front feet landing with one in front of the other. Confusing? Not once you get field practice! However, if the tracks end at the base of a tree and just disappear, it’s either a tree climbing rabbit (a very rare species indeed), or more likely a squirrel.

Squirrel track patterns are similar to the bounding pattern of rabbits, but their front feet land side by side, unlike rabbits whose front feet land one in front of the other. But just like a rabbit, the hind feet of squirrels, which are larger than the front feet, land in front of the front feet. The common squirrels of Oakland County; the gray squirrel, red squirrel, and fox squirrel, as well as the eastern chipmunk, all leave similar track patterns as they hop along, with the size of their tracks being the most obvious difference between the species. Behavior may give a clue too, as to what species of squirrel left the tracks. If squirrel tracks end under evergreens and pine cones have been chewed, it’s most likely a red squirrel; gray squirrels favor oak trees. 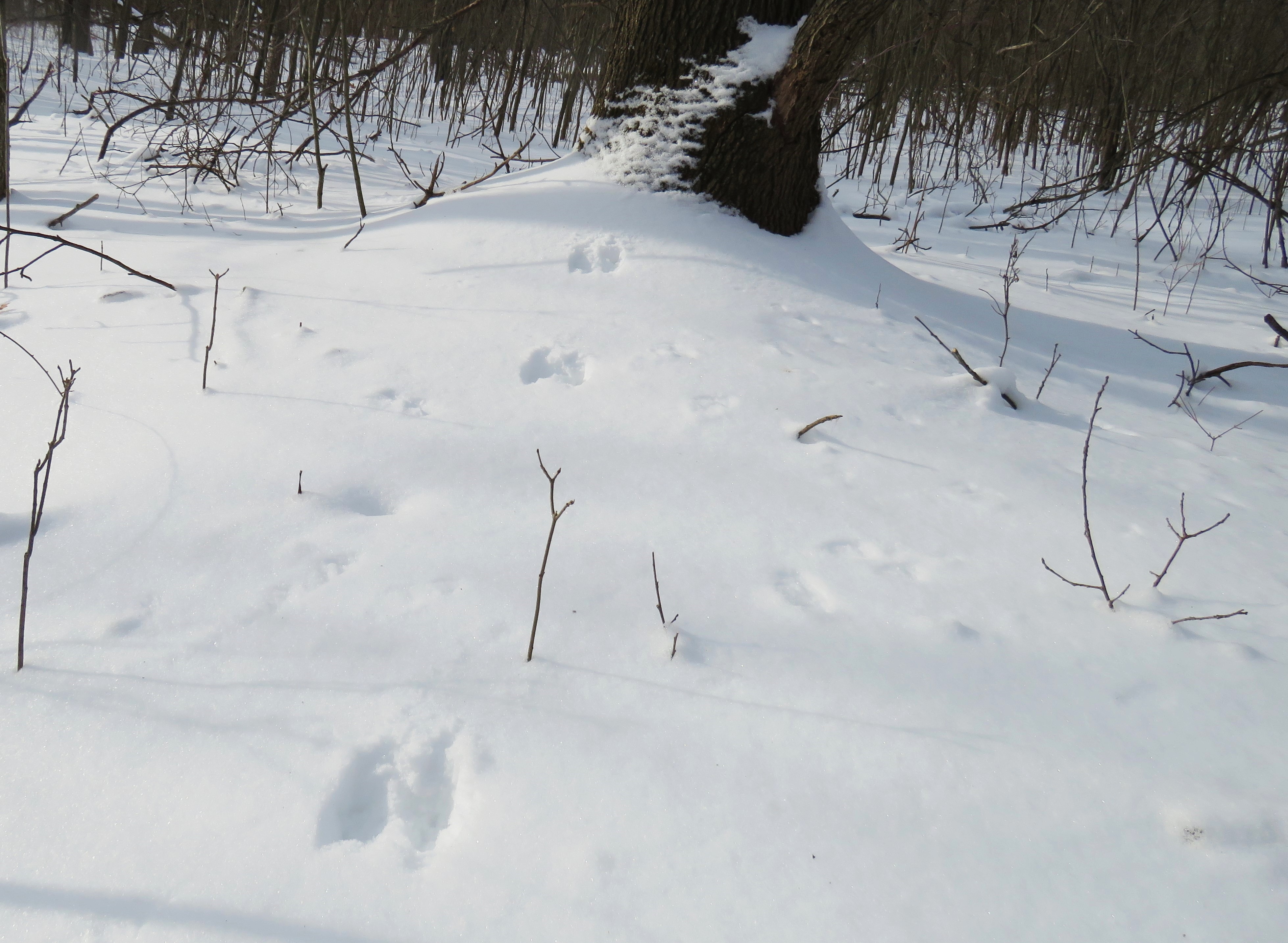 In winter, red squirrels follow well-established runways, both above and below the snow. Their predictability is often noticed by Red-tailed Hawks that perch on a tree limbs with a clear view of the meadow and wait for a small mammals to pass by. This image, captured in my meadow last week, documents the final travels of a red squirrel that made the fatal mistake of building his entrance hole into an underground snow tunnel just a few yards from an oak tree, that hawk’s favorite perch.

Raccoons are on the move now, searching for mates. They become very active in the early days of March and wander woods and wetland edges searching for mates, as well as open creeks to hunt for crayfish. Their tracks almost resemble a tiny human hand. If snow is powdery and not too deep, the five finger-like toes on each paw will be clearly visible. 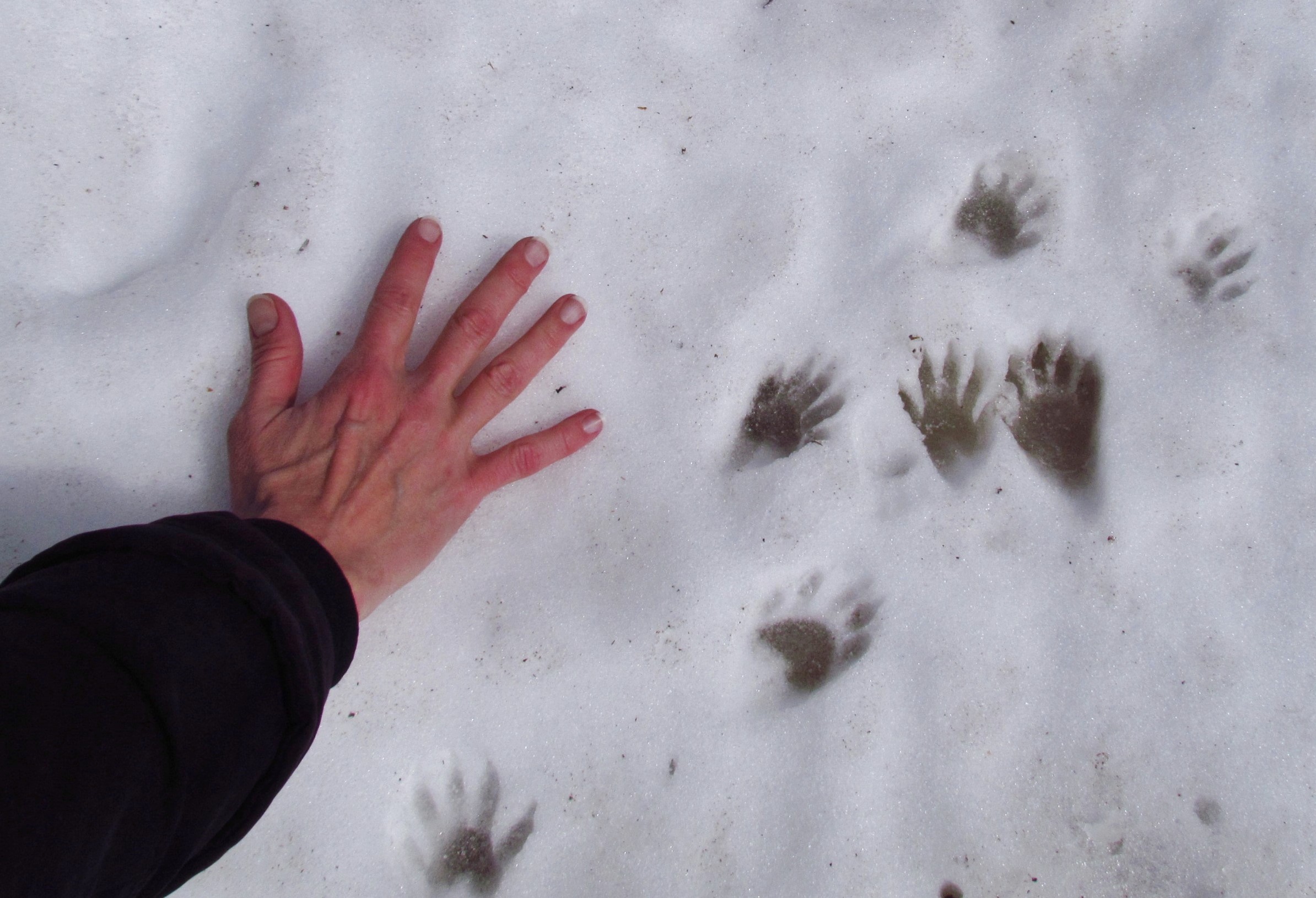 Skunk love is in the air. They wander far and wide in the closing days of February, looking for suitable sites to raise their young, and when feeling threatened, perfuming the air. While the snow remains deep, their tracks resemble what an imaginative mind might construe as a five-inch wide snake slithering about, for their thick fur often obscures their paw prints in the snow. The front and hind feet of the skunk are similar in size, but when tracks are left in melting snow or mud, the noticeably longer nails of the front feet may be noted. Skunks are excellent diggers and once lawns begin to thaw, they dig for lawn grubs, leaving small circular dig marks.

Opossum tracks are curious appearing and highly recognizable. Opossums have opposable thumbs on their hind feet, which are a great asset for grasping and hanging onto to branches when exploring trees for fruit or escaping a terrestrial predator. Each foot has five toes and the rear tracks resemble those of an infant child. Their intriguing star-like front track prints are formed that way since their “thumbs” stick out at an angle differing from the other four toes. Opossums will often wander in daylight as winter fades, paying visits to bird feeders and crossing sunny meadows in search of decaying fruit under trees, leaving “star” tracks in the snow.

White-footed mice leave bounding footprints in the same pattern as a squirrel, but so very much smaller. They are unmistakable, and the occasional drag mark of the tail is an extra clue nature-detective kids love. Sometimes the trail ends in a clump of shrubs where the mouse climbed up to an empty bird nest it had converted to a cozy home out of reach of four-legged predators. This bird nest was even capped with berries by an industrious mouse. And other times, the track disappears into a tunnel in the snow.

White-tailed deer tracks are next to, but not totally, impossible to misidentify. Sometimes, melting snow distorts their impressions. Their tracks have two toes (properly called hooves), that make an upside-down heart-shaped track. Whitetail deer often create well-traveled trails to get from one area to another, especially to daytime bedding areas amidst thick shrubs where they feel secure. Nighttime trails may be located in more open areas, and often those trails cut across meadows and fields and sometimes lead to suburban bird feeders.

Coyote tracks look very similar to dog tracks to the untrained eye, but there are significant and easy to notice differences, not just in each paw print, but in the pattern of the tracks. Coyotes, unlike cats, are unable to retract their claws. Their claw marks are nearly always visible on their tracks, unless the coyote walked on a very hard surface or through deep snow. The two nail prints near the top of the paw are almost always visible. Perhaps more important for the novice tracker is the stride of the coyote. Coyotes tend to trot along in purposeful fashion with the hind paws in line with, or on top of the front paws. They often walk in straight lines making their track pattern almost completely linear, something a domestic dog rarely does. An exception might be when they are mousing; the art of listening for a mouse under the snow and then pouncing. A lucky nature detective just may come across the scene of a mouse or meadow vole hunt and find a few specks of blood at the site.

Wild turkey tracks are impressively large, with three large toes in the front and a shorter back toe, which depending on snow depth, sometimes only registers as a “claw-like” impression. The track averages four to five inches long. It’s rare to find a solitary turkey track in winter, for they usually travel in flocks. And if suddenly the tracks come to an end and a bit of wing prints appear in the snow, look up. For they may have exploded into flight to rest in their roosting tree.

Becoming a track detective on the wilder side of Oakland County is a great adventure, but it can also be deceptively tricky, especially when snow melts and the tracks distort. That’s when a house cat track morphs into a cougar and a human print transforms into Sasquatch. Winter is waning, but there’s still plenty of time to read the stories in the snow. 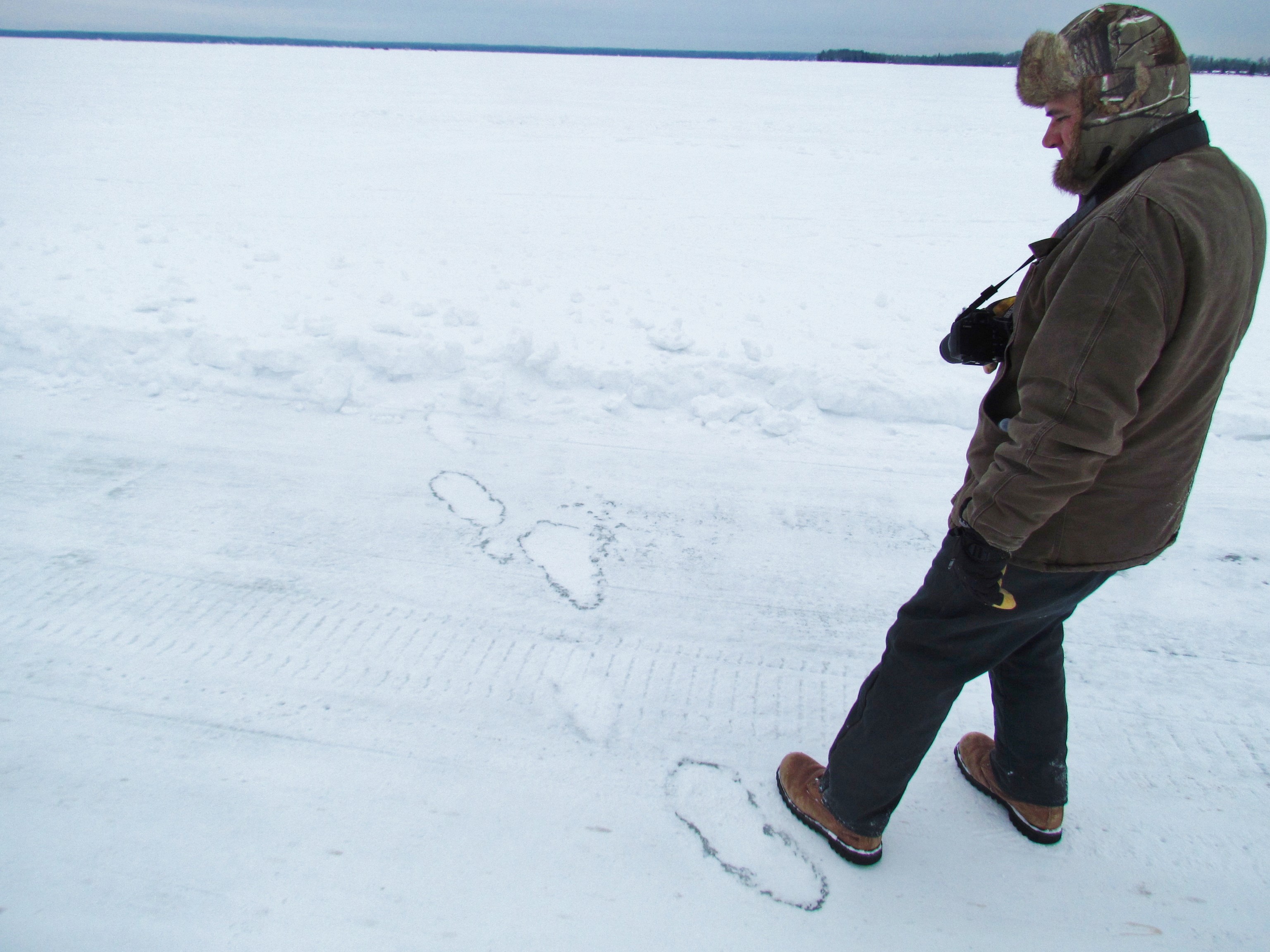