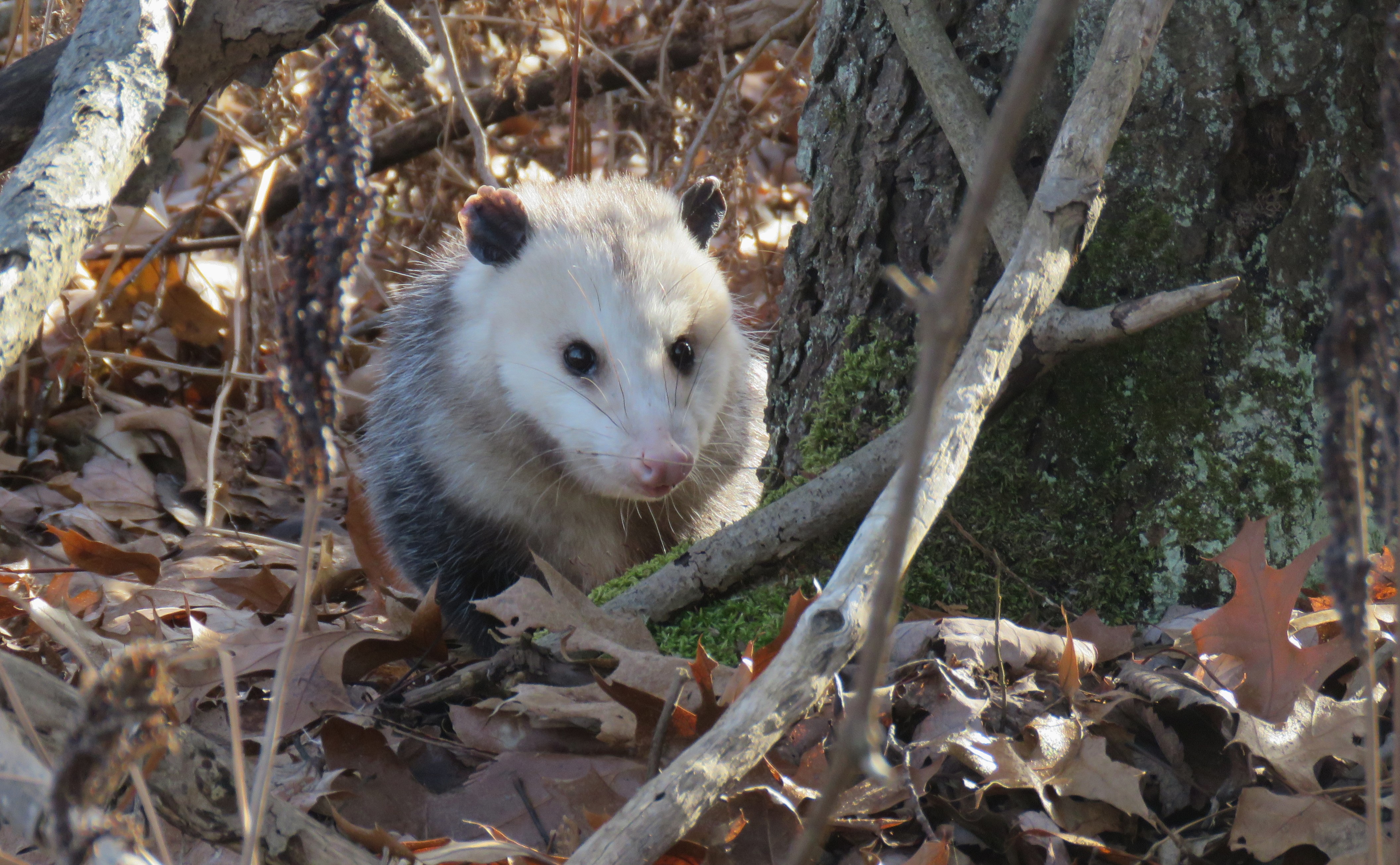 I’ve always had an infectious sense of wonder when it comes to close encounters with wildlife, but sometimes the very best encounters are totally unexpected, and it’s often with creatures that never seem to make anyone’s “must-see” list.

It was an unusually warm, snowless winter day at the end of January. I had just sprawled out on the ground with my camera resting on a fallen tree to position it for the best angle to photograph a beaver lodge at the edge of a secluded cedar swamp. Slight rustling in the dry leaves drew my attention. I turned to my left and an inquisitive young opossum was just a few feet away—not playing dead, not backing off, and not advancing. It watched me ever so intently as we both moved slightly about for better views of each other. The opossum inched closer and then we were eye to eye. It seemed to freeze in place. So did I. 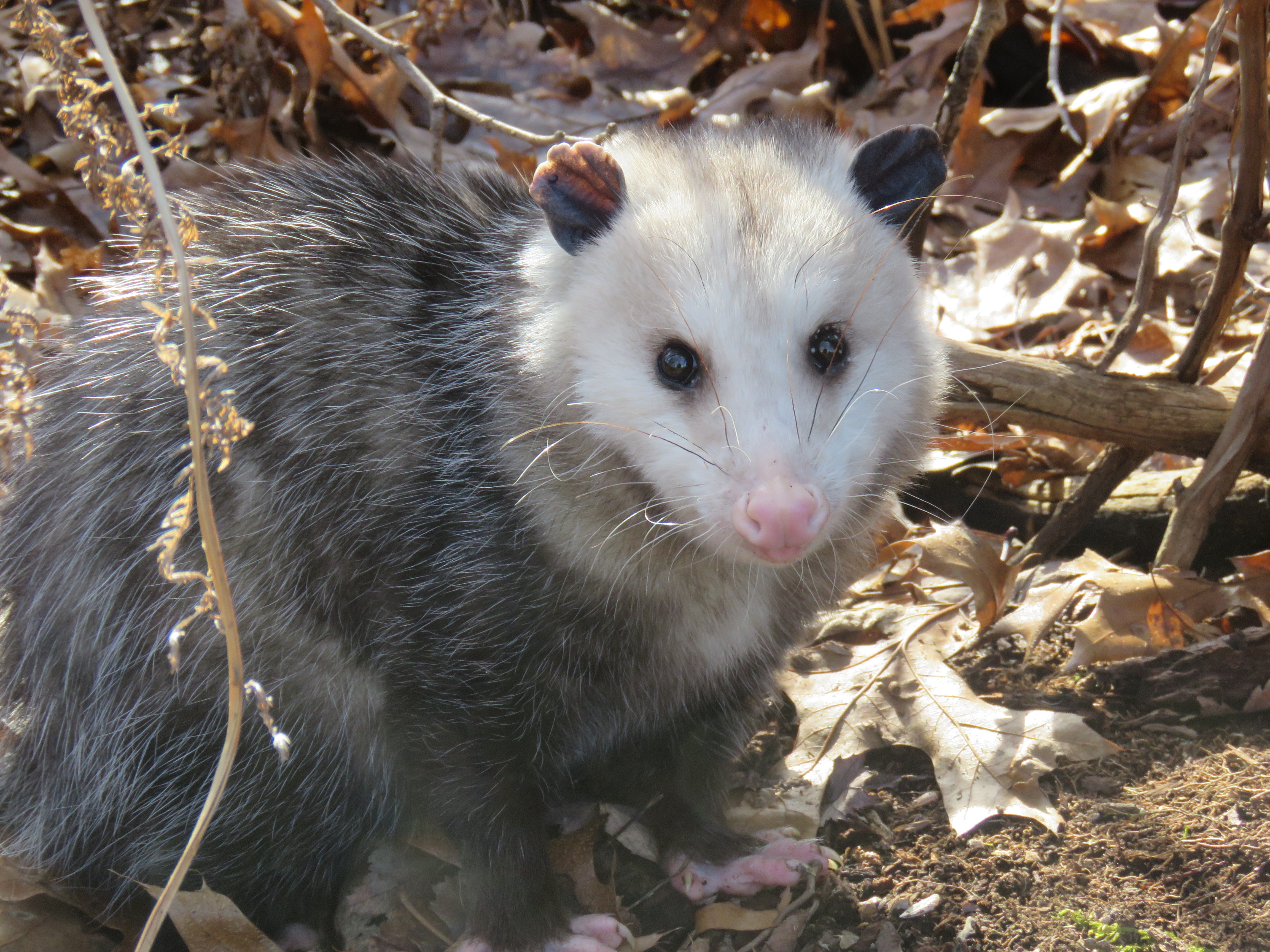 I wondered what the opossum thought about the two-legged creature (me) invading its habitat and whispering softly. Perhaps the opossum and I shared similar thoughts, “What a peculiar creature this is.” We were so close I could watch an insect crawling on the emerging green spathe of a skunk cabbage plant right next to the opossum. I wondered if the opossum sensed what I knew, skunk cabbage plants generate their own heat and as a result attract early emerging insects: protein rich treats. 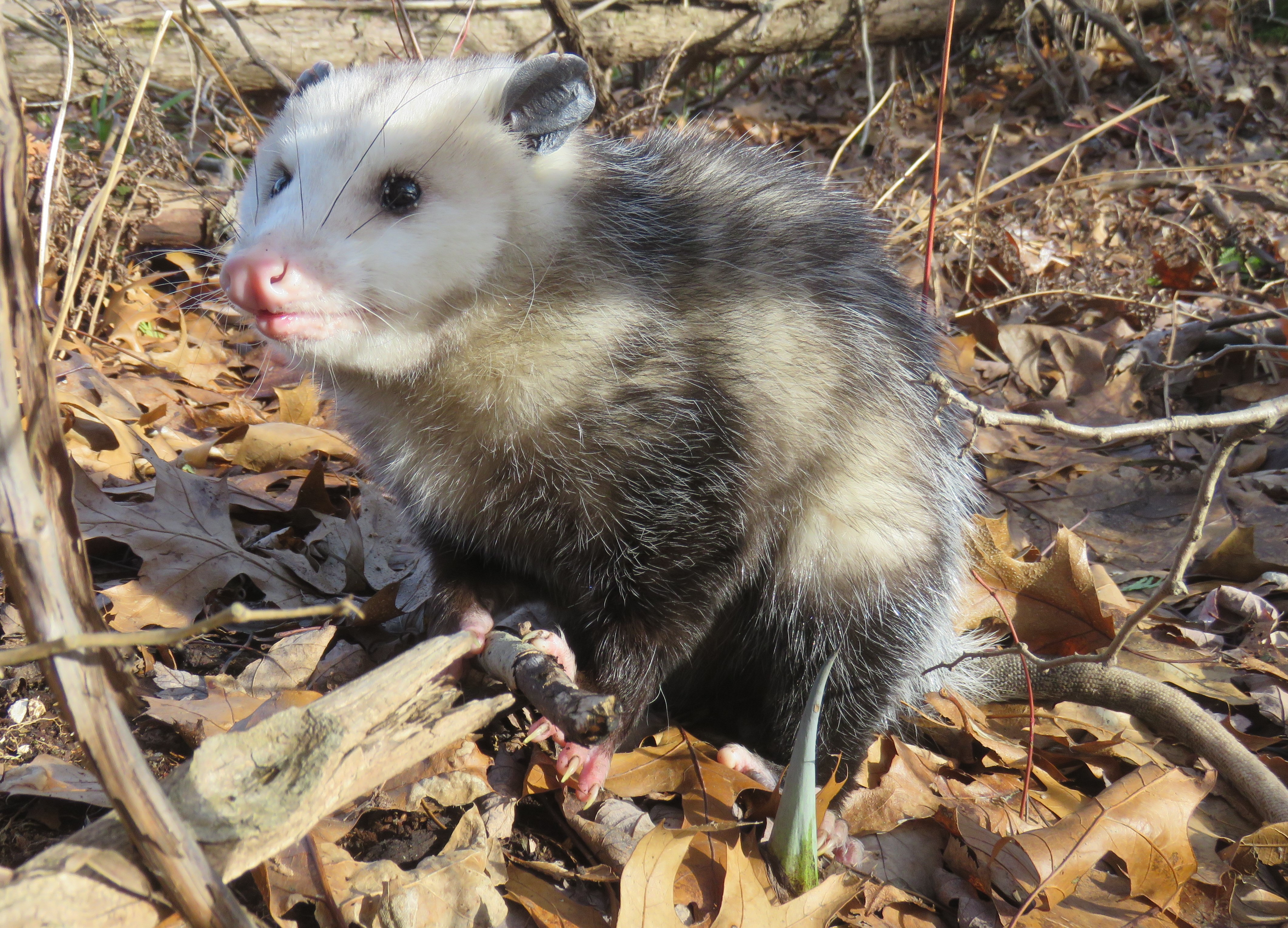 Opossum have wandered the earth for about 70 million years. Their closest kin live in the outback of Australia. Their hind feet have an opposable thumb, they have prehensile (grasping) tails, hairless ears, and fifty teeth, the most of any mammal. Their rather pointed snout and mouthful of teeth give them a peculiar expression. We humans might call it a grin. A grin that drools at times. That pretty much describes the Virginia Opossum (Didelphis virginiana), the only marsupial (pouched mammal) found in North America. They have adapted to life in our midst far faster than most of us have come to understand or appreciate their wandering ways. Opossums are now roaming the streets and back alleys of Rochester, Oxford and Pontiac; the palatial yards and gated communities of Bloomfield Hills; and the protected wetlands, wildlands and parklands of our county. It’s all about habitat and food, and they are masters of adaptation. 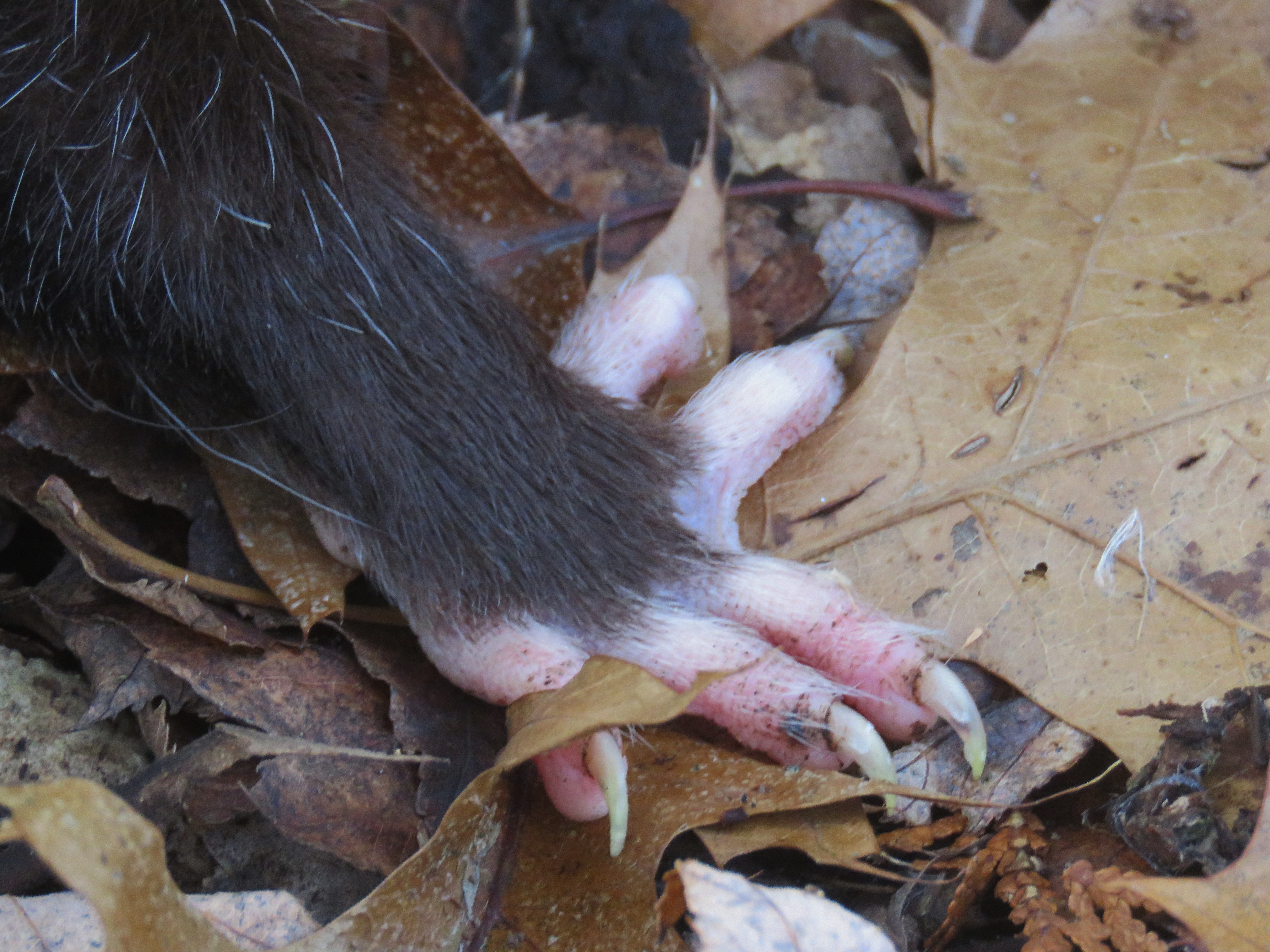 Opossum will eat almost anything. Although in the early days of February, they often scrounge for seed spillage under bird feeders. This is usually done at night, but sometimes during the day, making some homeowners think they have seen the world’s biggest rat. Their diet changes with the seasons and includes eggs, berries, snakes, frogs, fish, snakes, worms, mice, fruits, grains, bugs, cockroaches, crickets, snails and road kill. Opossums are relatively new to Michigan and were once restricted to the Southeastern United States. Many species of wildlife look at opossums as a delicacy, including red-tailed hawks, great horned owls, coyotes, and red fox. In human inhabited areas, opossums often meet their demise in the teeth of dogs and cats, or under the wheels of a car. 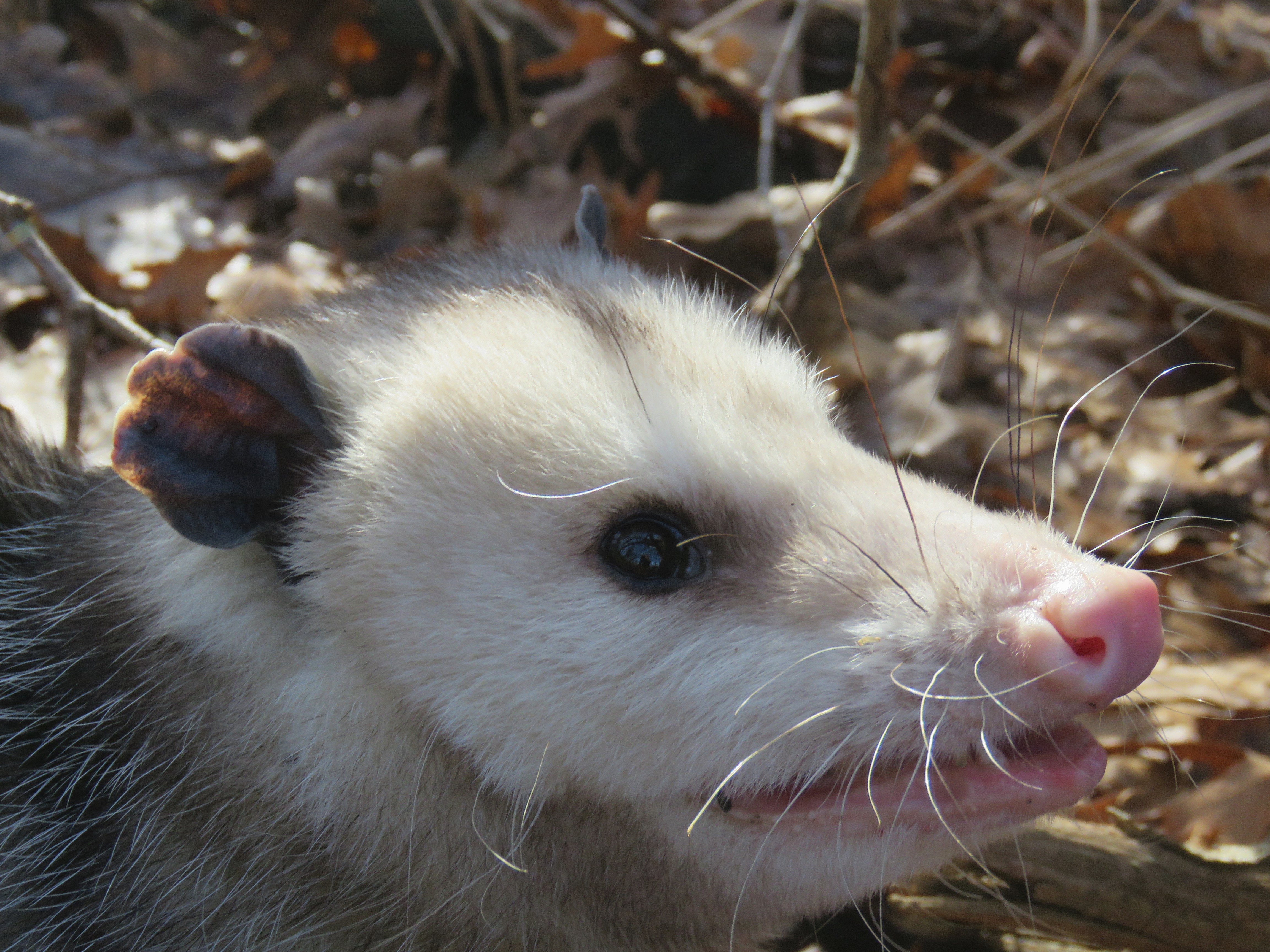 In spite of their numerous natural predators, and the cars that kill thousands every year, they are common in the Lower Peninsula and some are showing up in the Upper Peninsula as their northern expansion continues. Winter, however, can be tough for an opossum and many suffer frostbite on their naked ears and hairless tails, which is often the beginning of their end. It’s their mating habits, and adaptability to habitat, that keeps their numbers climbing. 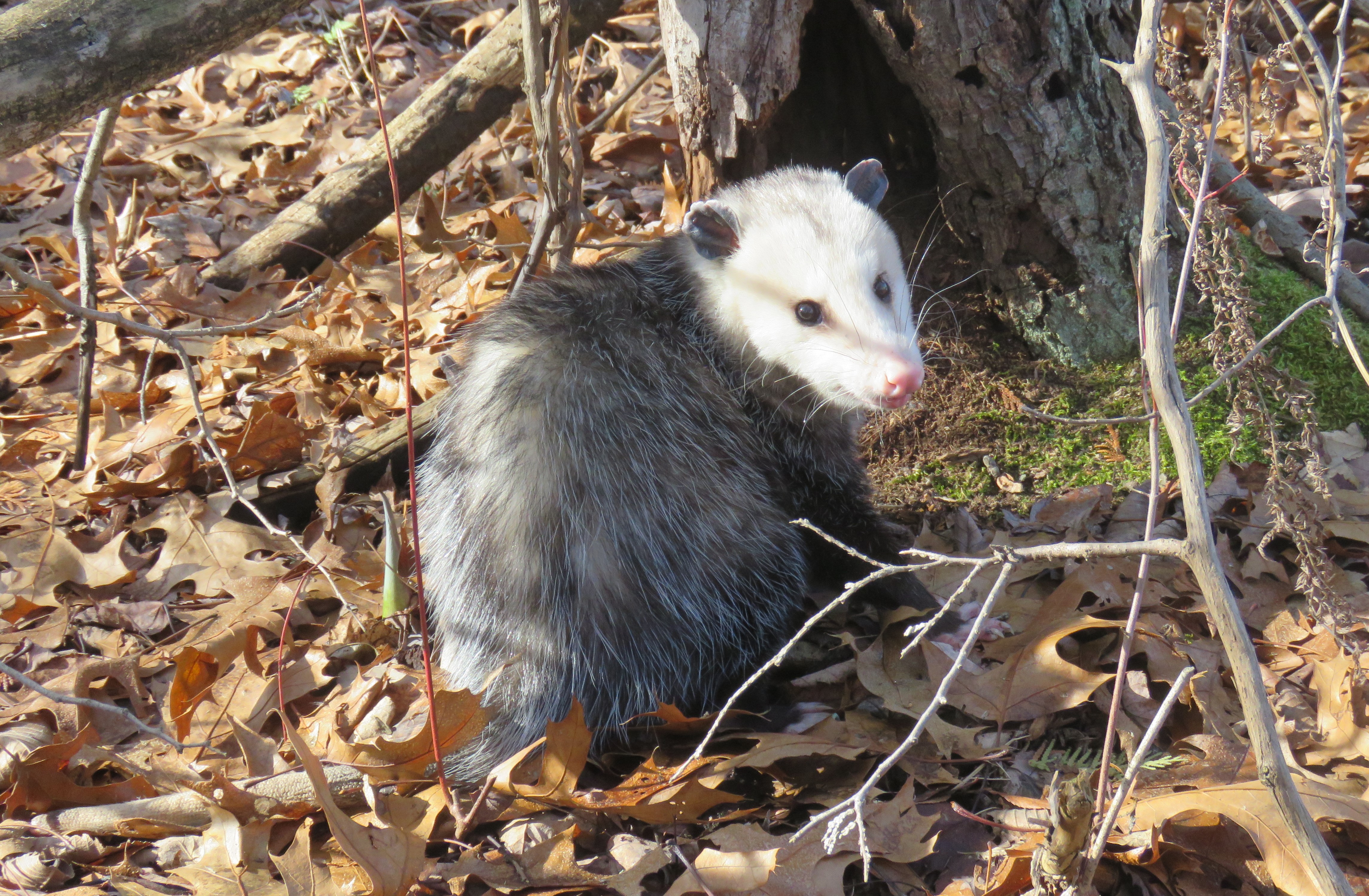 It’s mating season now. That opposable thumb helps create odd star-shaped prints in melting snow and along muddy creeks in Oakland County, giving clear evidence that they are now meandering, and perhaps looking for a mate. Twelve or 13 days after mating, ten to 20 furless and totally helpless young are born. They are smaller than honeybees at birth. Their tiny front feet have claws used to cling and climb up the mother’s belly and into her pouch. Once inside, they attach themselves to a teat, or at least try to, for the mom has only 13 teats. It’s a race for survival, the way of evolution. The lucky 13 remain about two months in the darkness and warmth of the pouch. Towards the end of their pouch stay they come “topside” and cling to mom’s fur for short rides. By the time they are mouse-sized, they are ready for extended rides with views of their world. They are independent by summer’s end. 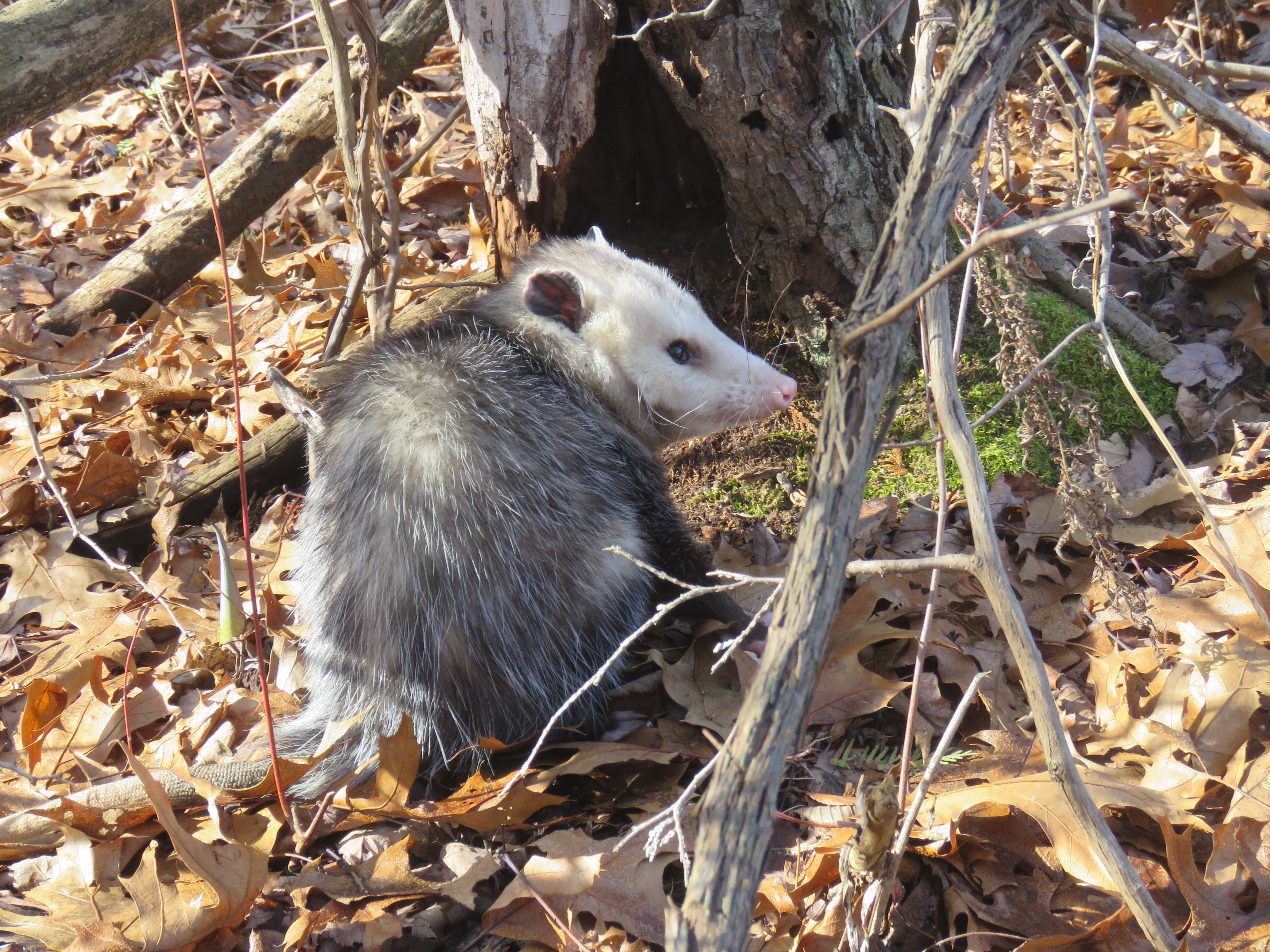 Opossum are perhaps best known for “playing possum.” There are physiological reasons behind this bluff, but the fun fact is that when threatened by a predator they will sometimes flop on their side and lie motionless with eyes closed. Others will open their mouths, drool and extend their tongue and go into a catatonic state, sometimes for more than an hour. Some will hiss, urinate and defecate in an attempt to dissuade the attacker. “My” opossum simply watched me. Every now and then when cornered, one will forget the playing possum routine, lunge forward and bite, and then if given a chance make a “full speed ahead” escape to the den or try to race up a tree.

Opossums are excellent tree climbers, so says the literature, but I have never seen one in a tree in all my wanderings. But then again Oakland County is not the natural home of the persimmon tree, a tree that produces their favorite fruit. But their long sharp claws would help them climb, and opposable thumbs on their hind feet would help grasp onto branches, and that prehensile tail would help with balance. However, contrary to legend, opossums do not hang upside by their tail to sleep. They usually curl up in a ground level tree cavity, or a leaf-lined abandoned groundhog den and snooze the night away. And as they sleep, they unintentionally gather a morning snack—ticks.

Ticks love opossums. Opossums love ticks. The National Wildlife Federation states, “With the huge rise in deer tick populations and the spread of Lyme disease, many friends of wildlife are welcoming opossums into their yards. Why? Scientists have learned that opossums act like little vacuum cleaners when it comes to ticks – with a single opossum hoovering up and killing as many as 4,000 ticks per week.” Rick Ostfeld, Senior Scientist at the Cary Institute of Ecosystem Studies echoes the federation and adds, “Opossums are extraordinarily good groomers it turns out – we never would have thought that ahead of time – but they kill the vast majority – more than 95% percent of the ticks that try to feed on them. So these opossums are walking around the forest floor, hoovering up ticks right and left, killing over 90% of these things, and so they are really protecting our health.”

When one considers their gentle nature, unusual beauty and human helping habits, perhaps we should be more considerate of this often maligned creature and “give them the brake” when driving. For more information on opossums, be sure to visit the websites of Opossum Society of the United States and Opossum Awareness and Advocacy. You just may begin to look at the opossum as one of the coolest primitive creatures living in our midst.

13 thoughts on “The Opossum: Our Marvelous Marsupial”