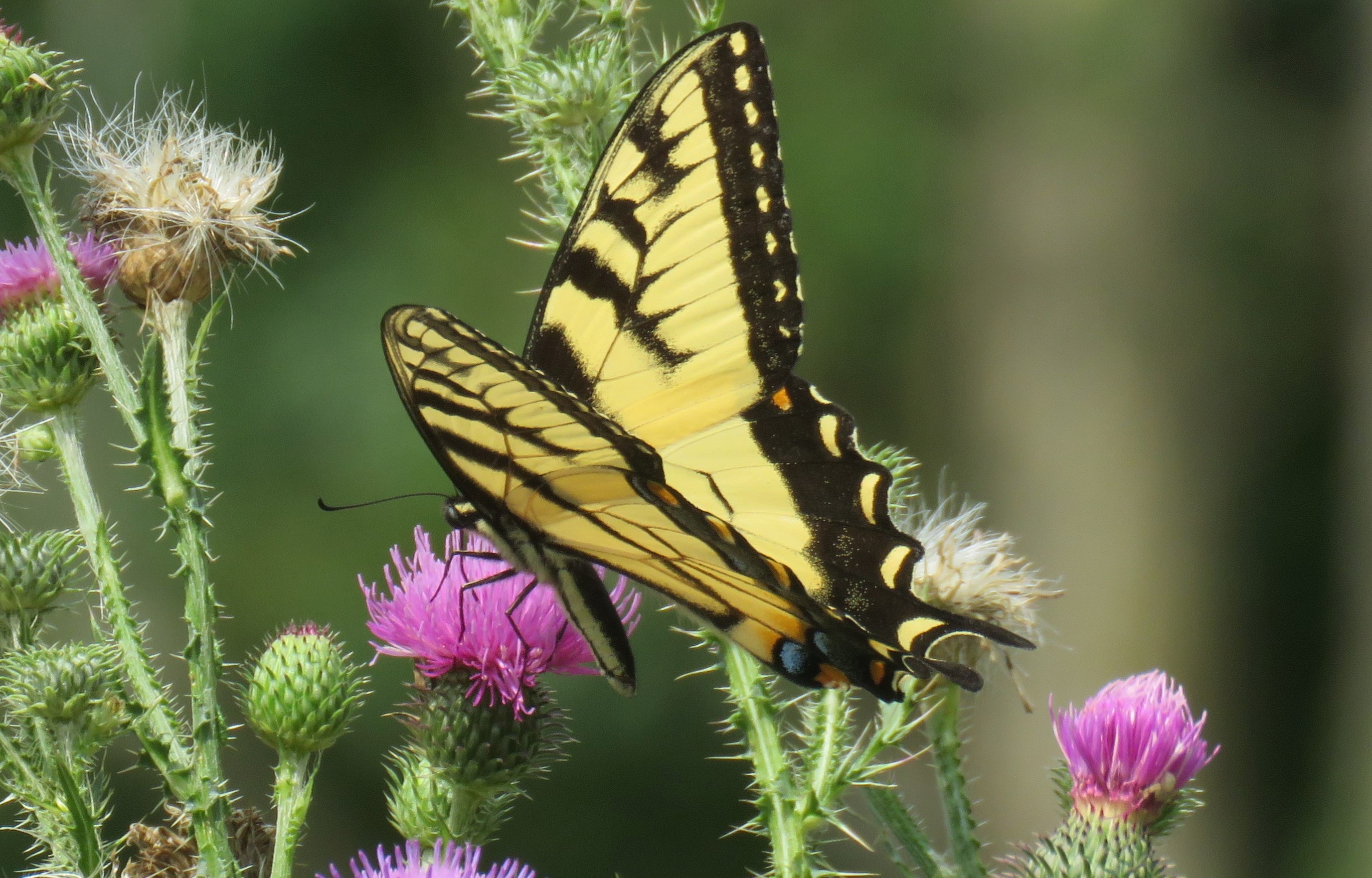 The Eastern Tiger Swallowtail (Papilio glaucus) is one of the most elegant butterfly species that flutters above the meadows and flower gardens of Oakland County. They are not as much of a “media-hog” as our milkweed loving monarch butterflies, nor do they undertake long border crossing migrations, but as for their visibility in these waning days of August—the beautiful swallowtails win hands down.

Don’t get me wrong. I like monarchs and often attend our local monarch butterfly festivals, but our “tigers on the wind,” the eastern tiger swallowtails, barely get a public notice even with their nearly five-inch wing spans. Perhaps they should, for they are appearing in the urban areas of Novi, Pontiac, Royal Oak and Rochester, and as to be expected they are fluttering about rural fields and the wide open spaces of our Huron-Clinton Metro Parks, Oakland County Parks, and the expansive State Recreation Areas managed by the Michigan Department of Natural Resources. It’s almost impossible to hike or bike down the Paint Creek, Polly Ann or Clinton River Trails on a sunny day without taking note of their mesmerizing appearance on trailside wildflowers. With those thoughts in mind, and no disrespect meant to the monarch lovers (count me among them) here’s a snapshot salute to the swallowtails, for in the world of nature all things are connected.

A closer look at the three words of their name, Eastern Tiger Swallowtail, is a good introduction to the species. EASTERN because they live in the eastern United States. TIGER refers to their tiger-like striping. And SWALLOWTAIL is a reference to the forked bottom of their wings that resembles the wing tips of swallows. The swallowtails are easy to spot thanks to their large size and distinctive coloration as they flutter about the edges of woodlands and over fields and visit hundreds, if not thousands of Oakland County yards. Telling a male from a female is not always easy, especially in flight. However, with a bit or practice it can be done. Male Eastern Tiger Swallowtails are always yellow, while females may be yellow or black. Females also have what I would describe as a shimmering splash of iridescent blue along the trailing edge of their rear wings.

Literature is rich with butterfly behavior facts, but it’s a lot more fun to witness swallowtail behavior rather than just read about it. For the past week I’ve been watching a scrubby patch of invasive bull thistles near my house. After just a few minutes of viewing them feed on the thistle, I realized they can feed right side up, upside down and in positions that would make a gymnast stare in awe. When the thistles sway in gusts of wind, the feeding continues, for the swallowtail’s six legs have tiny clawed feet that allow them to hang on tight. Although sometimes a wing flutter or two seems to help reposition them for the insertion of the tip of their long proboscis.

The proboscis is their nectar gathering tool and works something like a curved straw, allowing butterflies to sip nectar. During rest, this tube-like feeding structure of the butterfly is coiled tightly against the head. However when the butterfly feeds, the proboscis unfurls downward into the flower’s center, or whatever they plan to sip liquids from.

I noticed that sometimes they sip for about thirty seconds on a single flower, while other times it’s a “touch and go” landing without any apparent feeding. A bit of research and chatting with my entomologist friends revealed that’s because they did not like the taste of what they found, or the flower had no nectar. But the tasting is not done with the proboscis as might be expected but rather with tiny “taste receptors” located on their feet. Those same receptors are used to determine if the leaves of a possible host plant are a suitable species for egg laying.

Nectar provides a quick energy boost for a busy swallowtail, just like an energy drink may help a long distance runner. However, some of their nutrient needs are met in ways that might make a human cringe. Decomposing carcasses, especially those of fish, are rich in nutrients and it’s not a rare sight to see a gathering of different species of butterflies and other small insects getting their nutrients clustered on the moist scat of raccoons or coyotes. A lone swallowtail took flight from this coyote scat nutrient smorgasbord just as I took the photo, while the rest kept on sipping.

“Puddling” is another seemingly odd behavior practiced by most butterflies, including the swallowtails. Research indicates that mostly male butterflies gather in mud puddles. Professor of Entomology Professor Michael Raupp of the University of Maryland Extension Service described the reason behind puddling this way in his Bug of the Week blog.

“The males take in salts and minerals from the wet soil, which strengthen their sperm and encourage breeding. The nutrients are then transferred to the female through the sperm, thereby improving the viability of their eggs. Much like the highly concentrated nutrients in dried fruits (as compared with fresh), the nutrients in mud puddles become even more concentrated as the water evaporates. Consequently, butterflies often continue visiting these puddling sites until they are nearly dry.”

I have also noted that behavior on wet sand on the edge of sunny lakeshores and assume those taste sensitive feet signal it’s a nutrient-rich wet spot. 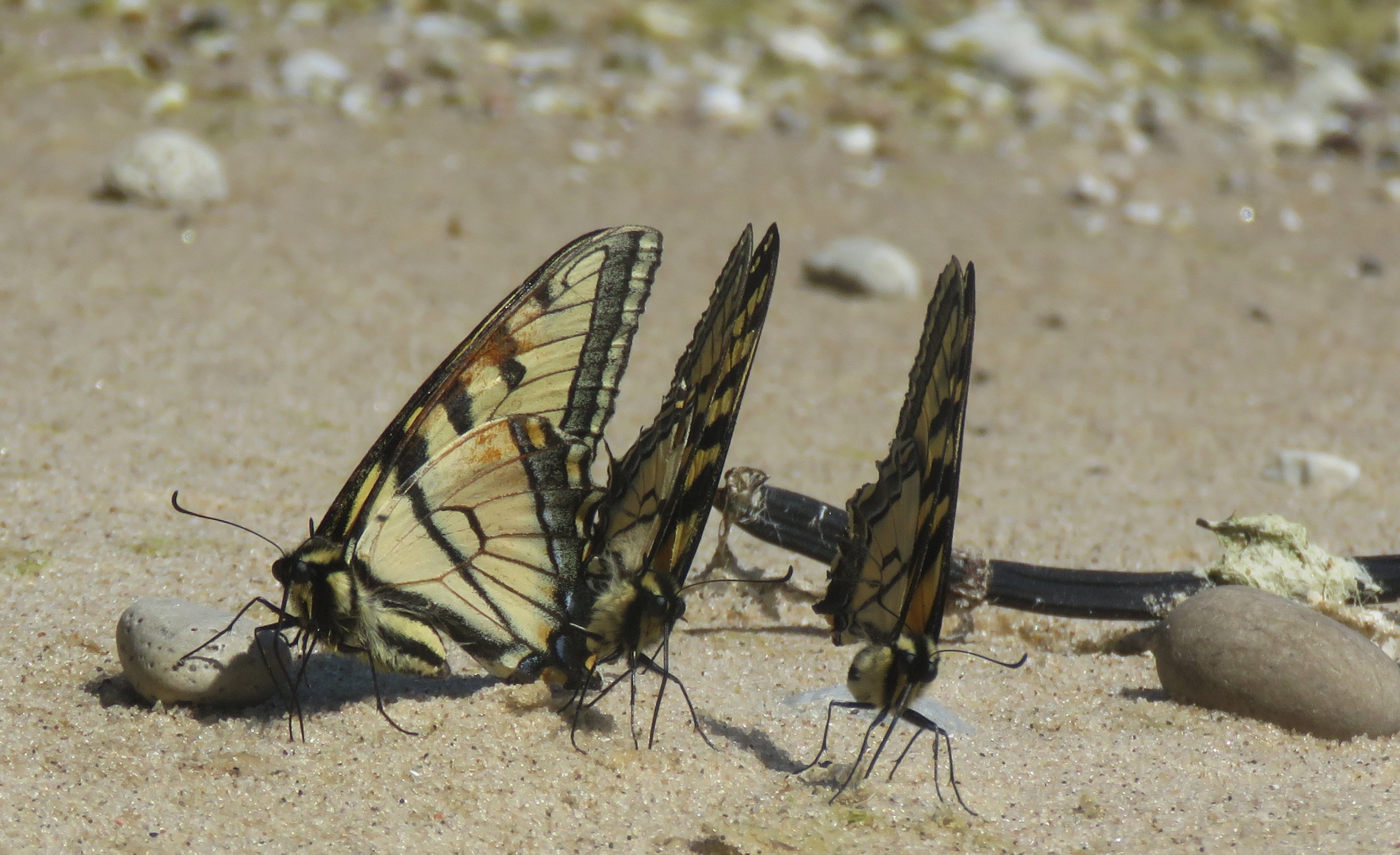 In Oakland County, eastern tiger swallowtails lay their eggs mostly on cherry, apple, maple, spicebush and sassafras leaves. Newly emerged young caterpillars are brown and white, with a coloration pattern and shape that resembles bird droppings, sufficient protection through mimicry to not draw attention to themselves. “Just more bird poop,” birds and other predators may think. As the caterpillars grow and molt they go through a series of changes (instars) until they morph into a stunning, emerald-green creature with a bold pair of black, yellow, and blue eyespots as part of their evolved elaborate defense system against predators. But that’s not all they have. If they sense danger, an odd-looking rather amazing organ called an osmeteria is activated. It’s a colorful retractable, fleshy, forked “horn” that resembles an oversized snake’s tongue, and it also emits a foul odor. Combine the smell with a view of the wiggly osmeteria and the intimidating eyespots, and a hungry bird or annoying human is likely to back off.

Although I have never had the good fortune to witness the display, this amazing 50-second Tiger Swallowtail Caterpillar Defense video documents the osmeteria in action. Perhaps the caterpillar in the video may look familiar even if you never explore nature’s way? Here’s why: Video game fans may recognize the amazing caterpillar of the Eastern Tiger Swallowtail as the creature that inspired the creation of the Pokémon, Caterpie.