Sassafras (Sassafras albidum) has set our woodland edges on fire with leaves that transformed from a dull green to a brilliant flame-orange color. The history and lore of this beautiful native tree of Oakland County is as rich and eye-catching as the autumn color of its uniquely shaped leaves. Three differently shaped leaves appear on the branches of this aromatic tree. As Michigan residents, we all recognize the mitten shape, the simple-looking leaf is known botanically as ‘entire’ and then there is the unmistakable three-lobed leaf. 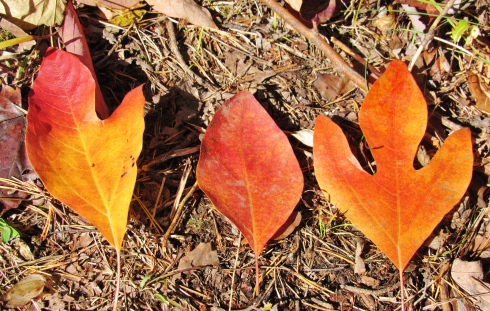 Sassafras root and root bark was used to make tea in the Northeastern and Midwestern sections of the United States, decades before Paul Revere’s famed ride. During the 17th century, sassafras was collected and shipped back to England for its numerous medicinal properties. According to published literature, for a brief time in the 17th century, only tobacco was exported more than sassafras. Researchers confirm that there are analgesic and antiseptic properties in the bark, roots and oils of sassafras. The plant remains popular today for its aromatic essential oils and medical properties and is also a favored food of many species of wildlife including deer, black bear and beaver. 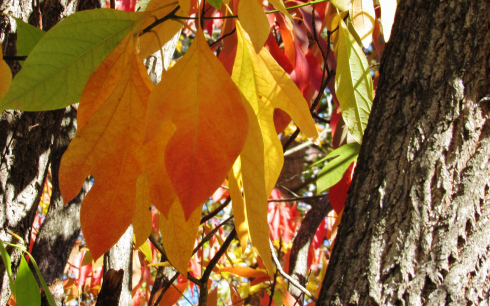 And now for the disclaimers:

With that said, I still make the occasional cup of sassafras tea at home in Brandon Township in northern Oakland County or on multi-day backpacking adventures in the sassafras-rich Appalachian Mountains. There is nothing quite as aromatic and flavorful as a cup of hot sassafras tree spiked with raw honey on a cold autumn or early spring morning and it’s well within the law too. 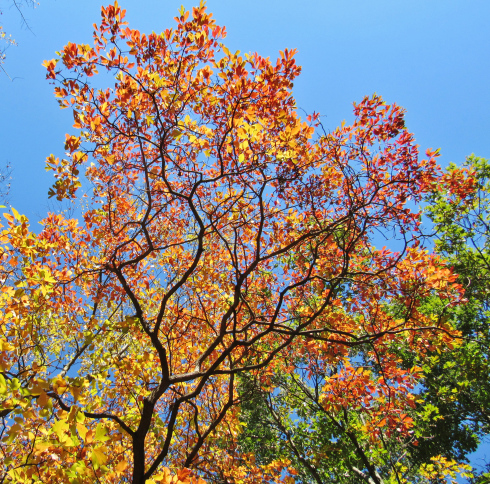 These medium-sized trees thrive near the sunny edges of woodlands and trails and are found throughout Oakland County. Beautiful specimens are in full color at Addison Oaks, Highland Oaks, Independence Oaks, and Rose Oaks County Parks and also in all of the Huron-Clinton Metroparks, State Recreation Areas and State Parks of the Michigan Department of Natural Resources in SE Michigan.

NOTE: Digging of the roots or cutting of any plant, including sassafras, is not permitted within Oakland County Parks. 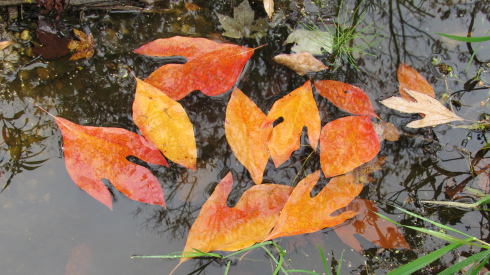 Visit DestinationOakland for details on all 13 Oakland County Parks.

3 thoughts on “The Woods are on Fire; with the Blaze-Orange Color of Sassafras”