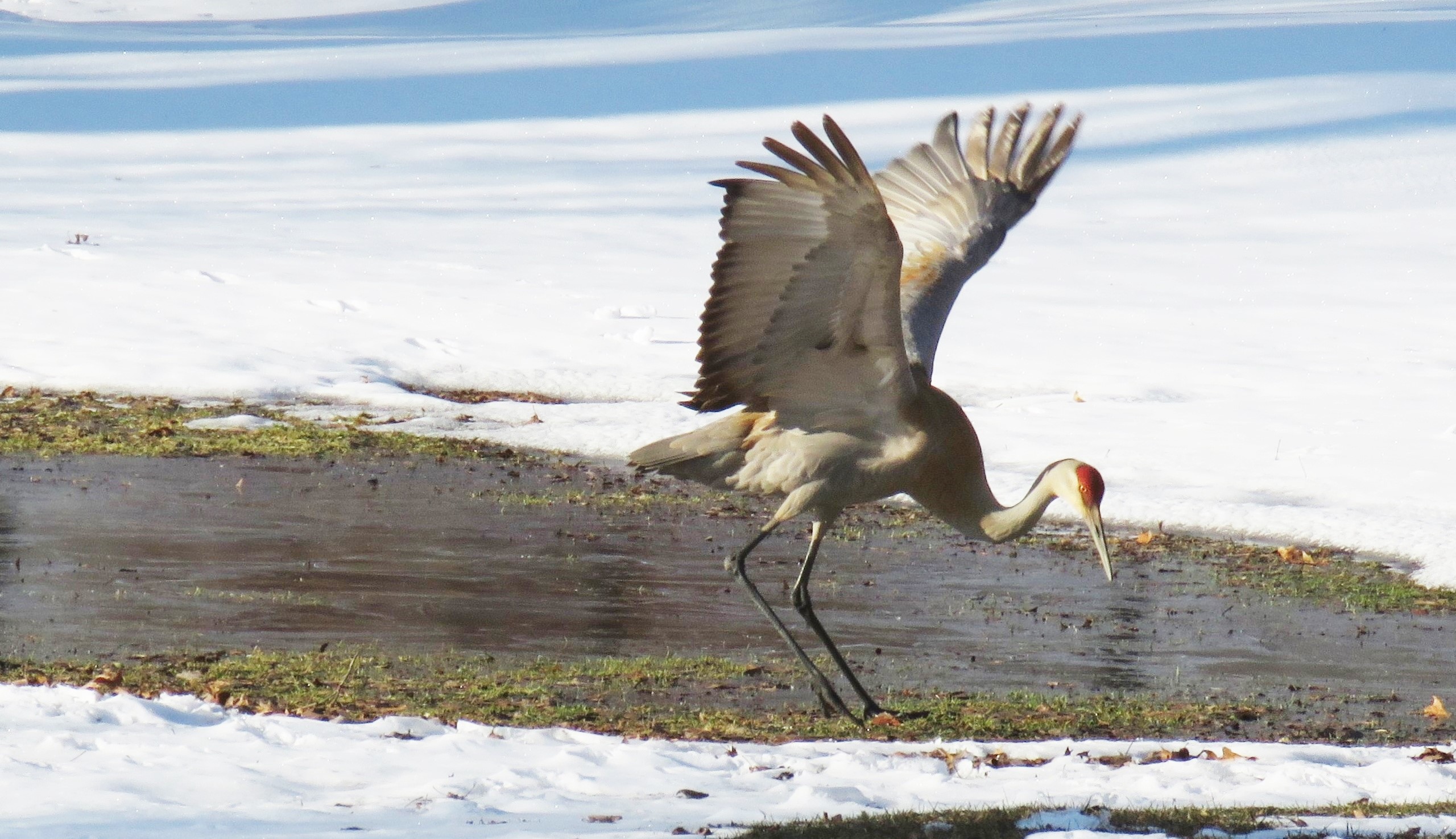 The confirmation of spring’s approach arrived on very long legs and boasted a bright red-capped head. It was just before sunrise when I spotted three statuesque Sandhill Cranes standing motionless on ice near a parking lot at Addison Oaks County Park. After a hilly, two-hour hike in a mostly snow-covered landscape, I returned to that melting patch of ice just in time to watch one of those red-crested, long-legged beauties of the wetlands stretching its wings in the morning sun. That sighting alone confirmed what the calendar already said: The final countdown to spring is well underway.

Nature lovers and naturalists have made notes of seasonal changes for hundreds of years. Henry David Thoreau remains my favorite when it comes to bluebird sightings. “His soft warble melts in the ear, as the snow is melting in the valleys around. The bluebird comes and with his warble drills the ice and sets free the rivers and ponds and frozen ground.” That’s how Thoreau documented the arrival of spring in 1859 with his words of exquisite beauty. For more of his observations of seasons, read Thoreau’s Life in the Woods journal, a more memorable confirmation of the seasons than today’s rambling words and Facebook postings. But alas, the appearance of beautiful Eastern Bluebirds in our meadows no longer announces spring, for many bluebirds overwintered in Oakland County. We just don’t notice them until they explore nesting boxes and natural cavities, or perch on fence posts in rural pastures. 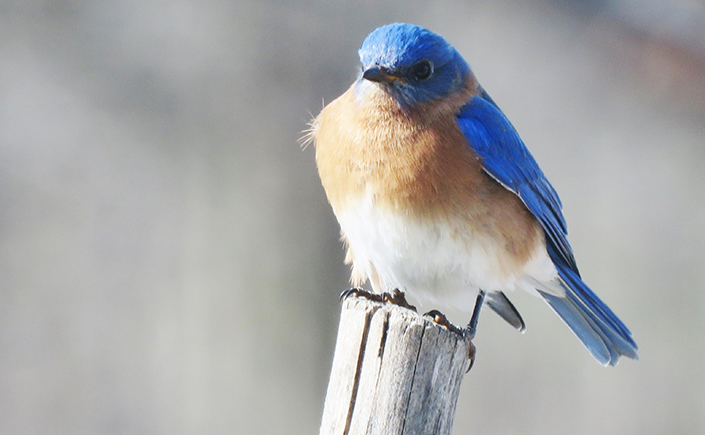 Robins also join the growing list of songbirds that are now false prophets of spring. Any day now, a newscaster will excitedly confirm that spring has arrived as they share a viewer’s photo of a robin hopping about a suburban lawn that still holds patches of snow. Many robins, like the bluebirds, spent the entire winter in Oakland County. We see them more now as the snow melts and water puddles on snow-free sections of lawns, conditions that bring worms wiggling to the surface.

Red-winged Blackbirds have returned to our wetlands and loudly proclaim their territory. Some of the earlier arrivals that scrounged about bird feeders last month had a head start in selecting prime breeding and nesting real estate and are ahead of the survival game of best habitat selection. The early arrivals, and those just coming in, are easily spotted on their perches near wetlands.

The “advance guard” of Canada Geese have been strutting about on ice since the end of February. Some were apparently here all winter, others just flew in, but in a few weeks they will all seek nesting sites. The tops of old muskrat lodges are perfect nesting locations for “wilder side” geese, while their more suburban kin nest build near the closely cropped lawns of lakeside homes. We know the rest of that story as the flocks expand in number to feast on their favorite human offering—closely cropped grass at lakeside homes, golf courses and manicured parklands near play areas.

The most accurate winged harbinger of spring in Oakland County is perhaps none other than the often maligned Turkey Vulture. Turkey Vultures quite literally smell spring. Their northern migration from southern regions is well underway. They have been spotted all across Oakland County soaring in “lazy appearing” circles with their wings held open in a characteristic V shape, known professionally as a dihedral angle. Some will perch on high-rise buildings, others settle down on barn roofs. They hold their wings wide open at sunrise to warm themselves before they set out riding the thermals, sniffing for carrion, their sweetest scent of spring. 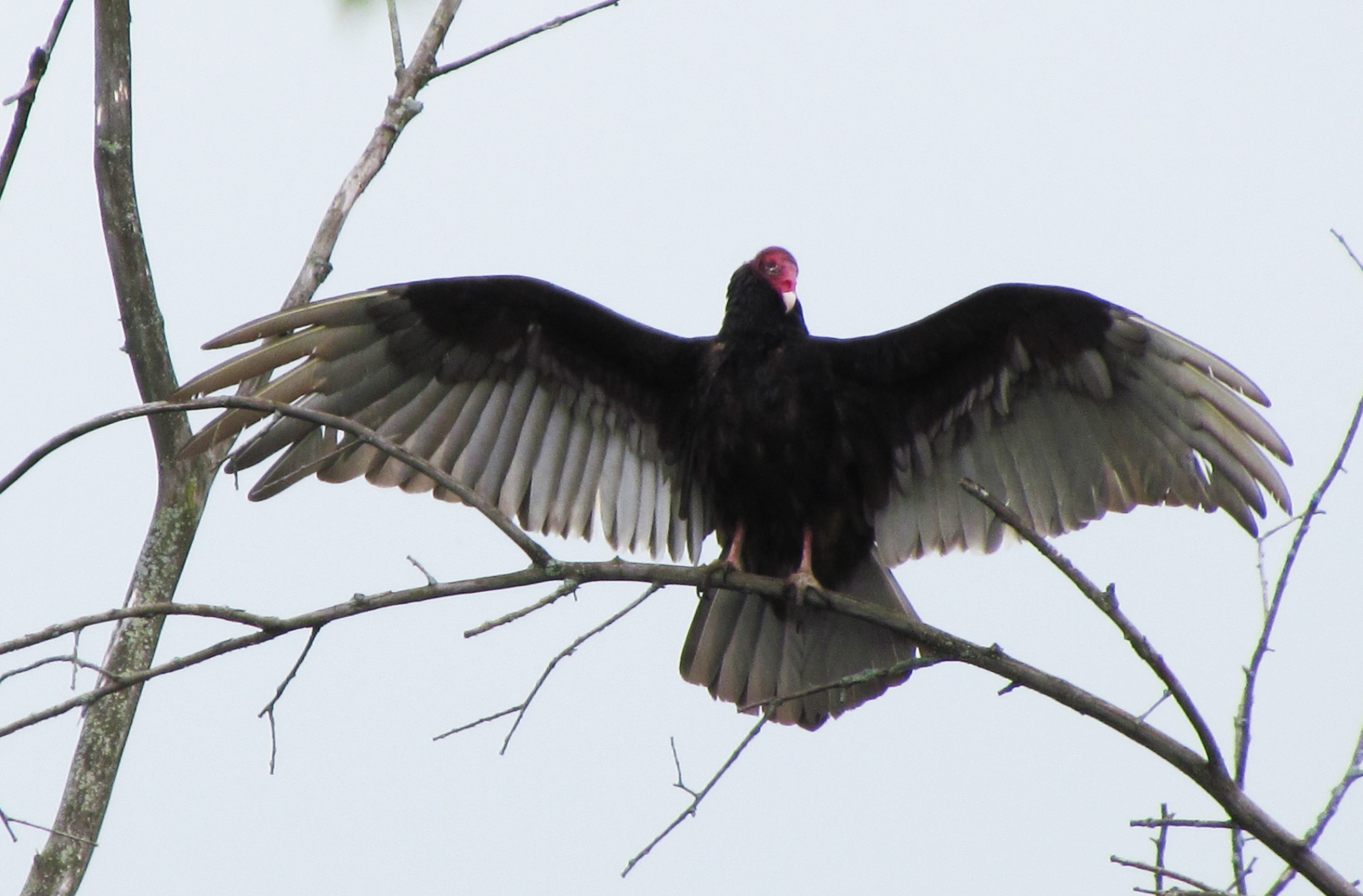 Vernal ponds begin to awaken as pond ice constantly crackles and rapidly shrinks in the woodlands of Oakland County. Salamanders are preparing to emerge from under decaying logs and migrate a few hundred feet to their vernal ponds, even if remnants of ice remain. Once the vernal ponds are fully open, spring will be here to stay and a new season of amphibian life, including spring peepers, wood frogs and chorus frogs will be fully underway. 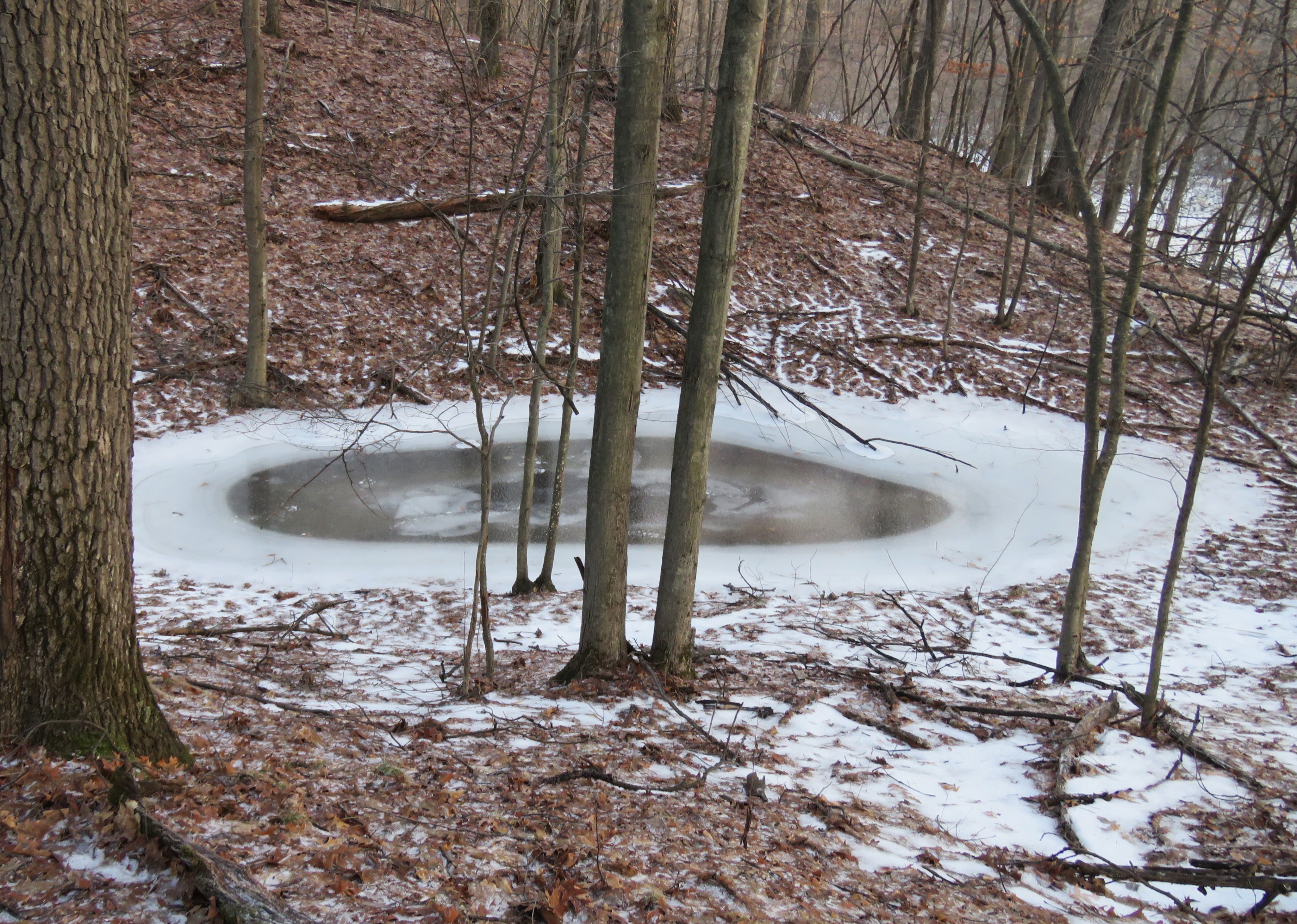 Skunk cabbage has emerged at the edges of meandering creeks deep within our woodlands. Skunk cabbage is a “thermogenic” plant and is capable of thawing frozen soil and melting snow; it even produces flowers before leaves emerge. Research has shown that their emerging flowers have the capacity to produce metabolic heat approximately 15 degrees to 35 degrees Fahrenheit above the ambient temperature, thus causing the strange open circles of snow around the plant. What do those circles tell me? Skunk cabbage behaves in some ways like a warm-blooded animal, giving it a head start in growth at the dawn of spring!

It’s an exciting moment when we find snow fleas, usually numbering in the thousands on patches of melting snow near a tree trunk. These tiny creature don’t appear much bigger than large grains of pepper, and leap about the snow. Hundreds would fit on the surface of a penny. There is no need to cringe at the word flea, for although that’s part of their name, they are more properly called springtails—a tribute to their ability to leap great heights, for their size. Wait a few weeks and the blossom of hepatica will bloom at the base of those very same trees.

If you have walked in the woods of Oakland County, rich with the fresh scent of spring, or almost anywhere else in North America, you have probably already encountered Turkey Tail fungus (Trametes versicolor), my favorite memory stirring fungus of spring. Its scientific name “versicolor” hints at its most distinguishing feature: layers of colorful, arched bands that may be greenish, brown, gray, or even shades of red. Viewed together, they resemble the colorful tail feathers of a strutting turkey. They are saprotrophs, which means they are decomposers feeding on decaying matter such as fallen logs, and as a result they enrich the soil. Look them for on sun-soaked logs along the trail’s edge. 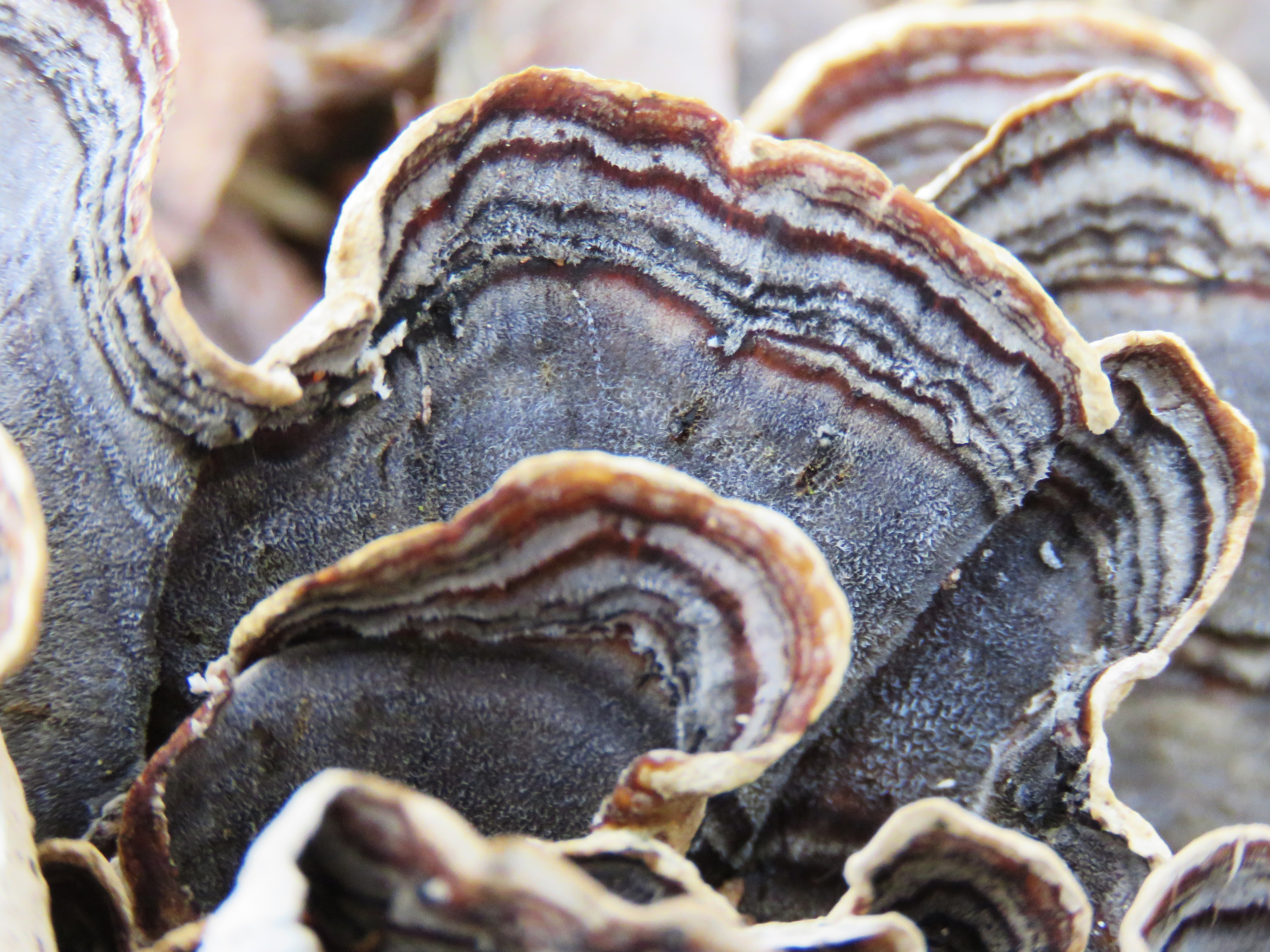 With nights still routinely below freezing and sunny days climbing into the 40s, maple sap is at peak flow. Nature Centers celebrate the end of winter with maple festivals, but sap also drips on its own without the help of human intervention. Broken twigs of maple trees glisten as icicles of sap form, a tastable phenomenon of nature that only occurs as the duel between the seasons accelerates. Get out and hike and search for your sap-icicle! 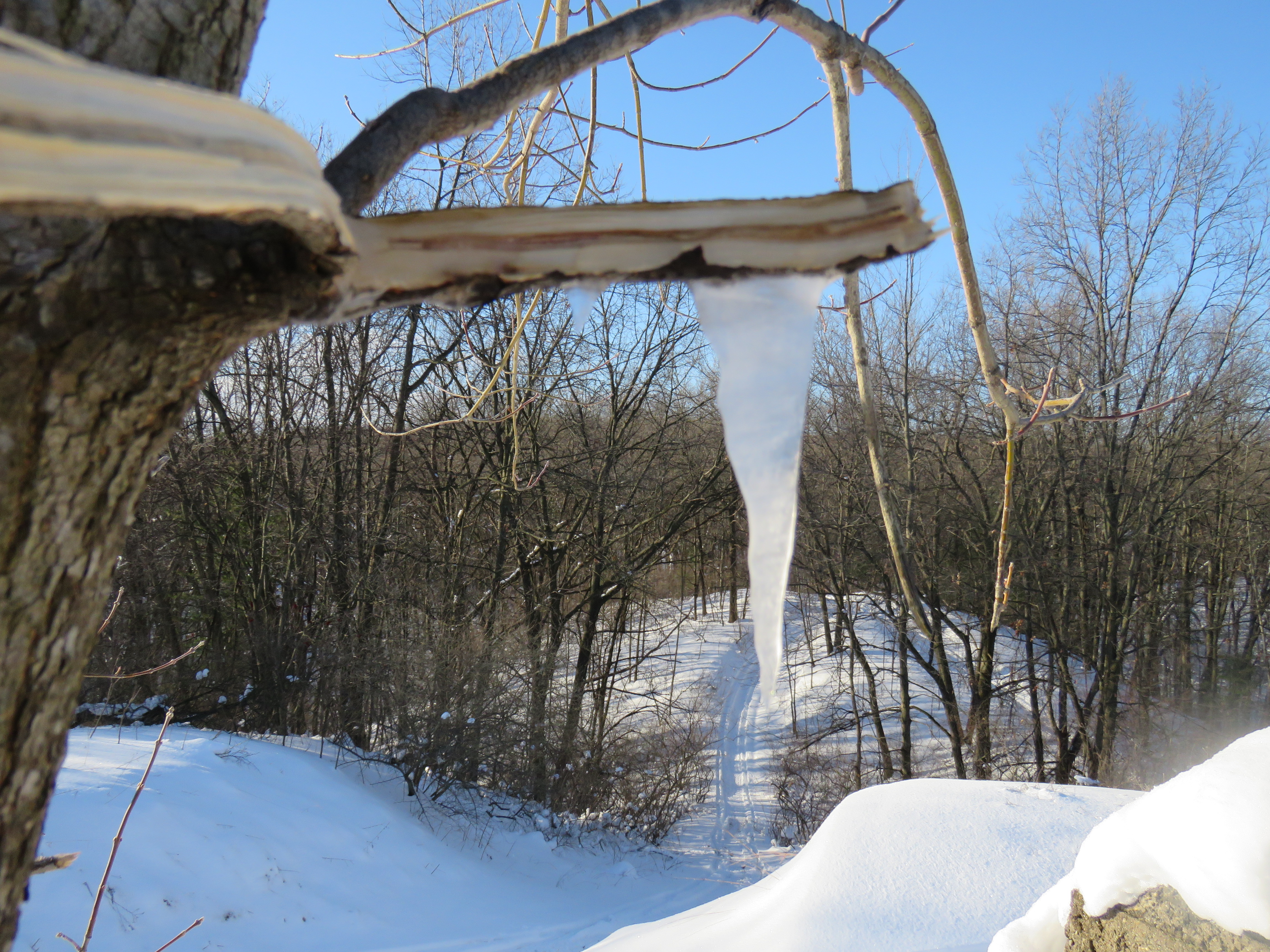 Restless raccoons are on the move from the most urban to the most rural areas of our county. Their distinctive paw prints in remaining snow bear witness to their nocturnal meanderings in search of food and new den sites. Some select attics or chimneys to raise their young, others find more traditional hollow trees. For the lucky raccoons that still live in natural wildlands, there is nothing quite like a sun-soaked branch of a mighty oak tree to take a late morning snooze and perhaps dream of frogs, duck eggs and warmer days to come.

4 thoughts on “Sights, Sounds, Scents and Signs of Spring’s Approach”