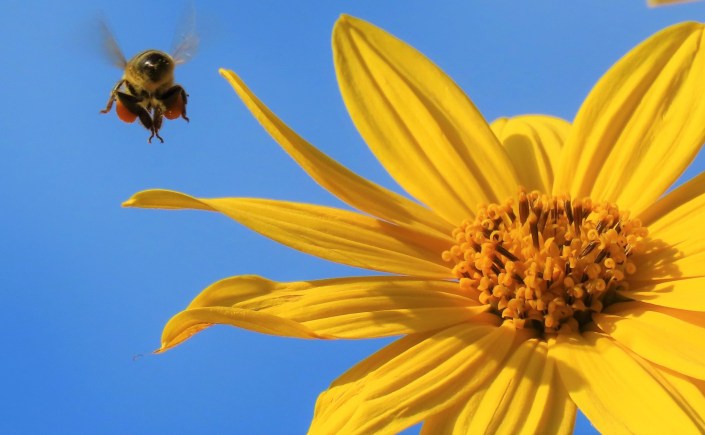 Honey bees know a good thing when they see one. They found the ten-foot-tall object of my quest first — a cluster of brilliant, yellow, eye-catching flowers that bloomed during the first week of October. The bees were harvesting the bright orange pollen of Jerusalem artichokes for their near final foraging flights of the season. That was almost two weeks ago. I returned a few days ago for the tubers.

The blossoms have now wilted, which signals that it is prime harvest time for the tubers. The Jerusalem artichoke’s crunchy tubers fuel my curiosity-driven foraging, an activity that should only be undertaken when you are 100 percent certain of any species sought, and possess accurate knowledge of edibility.

How this native plant officially received its name remains an issue of debate, but a 1981 story in the New York Times may hold the key to the mystery. The critical part of the lively story states, “The sunflower is called girasole in Italian, – it means gyrating or turning to the sun. And, at least according to folk etymology, girasole through some slip of nomenclature turned into Jerusalem.”

When I took photos of Jerusalem artichokes in a meadow near my house over a period of a few days, I noted that in the morning the blooms faced east, and by late afternoon they turned toward the setting sun.

The artichoke part of the plant’s name is less controversial, and apparently comes from the taste of its edible tubers, which resemble very large, lumpy-shaped ginger roots. Due to their underground growth, Jerusalem artichokes are often mistaken as root vegetables. It’s an easy mistake to make, and I made it too, until I dug deeper into the plant’s growth patterns and discovered the difference between root vegetable and tubers.

Root vegetables grow downwards, absorbing nutrients and moisture from the soil, while tubers form at the base of the root. Another significant difference is there may be multiple tubers formed from one above-ground plant of a potato or Jerusalem artichoke while root vegetables, such as a carrot, only have one vegetable forming from each plant.

Jerusalem artichokes wilted after the first frost, signaling that it’s time to prepare to harvest the versatile tubers of this often unnoticed plant. You won’t have to be concerned with bees foraging on the blossoms, as their pollen is long gone and tucked away within the cells of their beehives.

I started this year’s harvest by munching on some thinly sliced, raw tubers, after brushing off the soil. The taste and firm texture was pleasing with what I might call a slightly nutty flavor. However, I kept my early pre-frost sampling to a minimum after reading and rapidly confirming that raw tubers, especially before frost, can lead to significant distress in the form of intestinal gas.

The best time for harvesting tubers begins about two weeks after the blossoms fade and the flowers and tall stems have wilted. The plants remain recognizable even after the blossoms are gone, if you pay attention to the stems. They have a sandpaper-like texture and most are six to ten feet tall.

A single mature Jerusalem artichoke plant might produce two or three pounds of tubers, and the harvesting of tubers can continue throughout the winter. Halloween week in Oakland County would be an ideal time for a first harvest, but keep in mind that although most parks and wild lands permit casual harvesting of wild berries, nuts, and tree fruits, you cannot dig in public parks and wild lands for tubers.

I’m lucky to have Jerusalem artichokes growing just yards from my kitchen window. They added early autumn color to my kitchen cooking world and also lured in bumble bees. Those plants spread rapidly from my garden digging in earlier years. When digging the tubers, which are usually hidden about four inches beneath the surface, it’s easy to sever part of them. That’s good news, because new plants emerge from the remnants of broken tubers.

Starting in mid-autumn, and throughout the winter, many Whole Foods stores sell Jerusalem artichoke tubers. Don’t forget — they are usually sold under the name “sunchokes.” Whole Food’s website includes this information: “Although their flavor is deeper and nuttier, their culinary properties are akin to potatoes and they can be boiled, roasted or added to soups or stews similarly. For a few recipes that highlight their uniquely earthy taste and firm texture, try Jerusalem artichoke and parmesan tart, made with an unusual polenta crust, or hearty split pea soup with Jerusalem artichokes.”

Creativity can replace a recipe for the hobby harvester. Jerusalem artichokes can be prepared in as many ways as the potato: boiled, steamed, roasted, pureed or fried. First, wash the tubers off in cold water. A dish brush will help remove the soil. Then, you are ready to explore this often unsung gift of nature with your culinary skills.

Farmer FoodShare, a farm sustainability and hunger relief organization based in Durham, North Carolina, shares the basics of harvesting and offers two easy recipes. I tried their scalloped sunchokes recipe, which took just minutes to make. It was fun to watch and listen to the sliced sunchokes sizzling with seasonings and parsley on my cast iron pan. That celebratory moment served as a reminder that nature has many treats waiting for us on the wilder side of Oakland County.