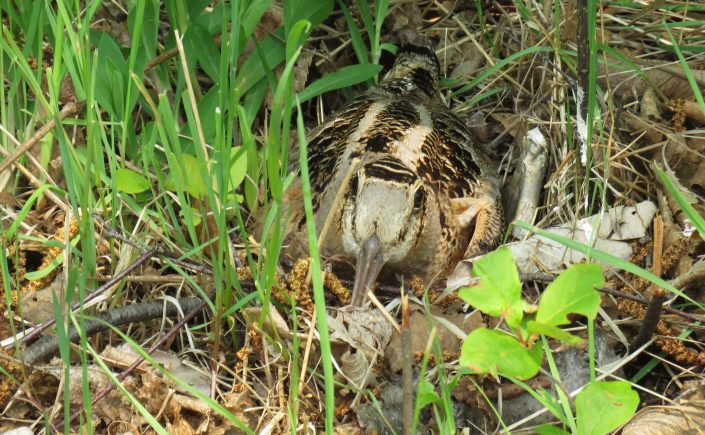 I know of a field with heirloom fruit trees (a location I shall keep secret), where Timberdoodles hide in plain sight to incubate their eggs and dance in the sky. That’s where this wilder side tale really begins a few months ago on my spring hunt for morel mushrooms. Now you may ask, what do morel mushrooms have to do with Timberdoodles (American Woodcock), one of the strangest appearing birds of Oakland County you may ever encounter? More than you may think, for “In every walk with nature one receives far more than he seeks,” a quote from John Muir that so often comes to life for me. That day in May was no exception.

It was late afternoon. I was tired. With my eyes to the ground, I meandered through the field, searching near young birch trees and fruit trees for that delectable fungi that evades my prying eyes. Suddenly, I noticed something amidst old dry leaves about 15 feet from me. That mysterious “something” seemed slightly out of place. It had a shape that did not fit the ground cover scene and it certainly wasn’t a morel. In hindsight, I suspected its brownish color drew my attention as my eyes searched hopefully for emerging morels.

For the next few seconds my mind raced through options: Perhaps a sleepy chipmunk? A young rabbit? Carelessly discarded trash? However, the inquisitive part of me said “move closer, it’s something else,” and so I did.

I went a few steps forward before slowly kneeling at the side of a shrub that was partially blocking my view. That’s the moment I detected eyes that were looking back at me. Eyes that seemed to be on top of the head of a strange multi-colored bird with a brownish hue. That bird had a long bill, a really long eye-catching bill. Unless you know what a Timberdoodle is, and how tough it is to get this close to one, the next sentence won’t mean a thing to you. The fact of the matter is my heart pounded with excitement when I realized I was in a stare-down contest with a nesting female Timberdoodle, a perfectly camouflaged bird with brown-mottled plumage that blends in perfectly with dried leaves and vegetative matter which decreases their chances of detection from predators. Their list of predators is long and includes raccoons, skunks, crows, opossums, coyotes, foxes, large snakes and even  off-leash dogs and free-roaming cats.

It was a new first close-up encounter for me! I was so excited at the sighting, I almost forgot my camera was in my grab-and-go day pack that accompanies me on my outdoor adventures. It took a minute of fumbling to get my camera out and in focus as I moved slowly to avoid scaring the bird. I knelt lower to the ground, focused and began to click away. I made sure to pay close attention to the large brown eyes that were set well back and high up on the sides of its head, a gift of evolution that lets the ground-nesting Woodcock watch for danger approaching from all directions – above, behind, straight ahead and from its sides.

I realized my sighting was pure luck and that it was my eyes to the ground morel hunt that led to its detection, for Timberdoodles are extremely hard to spot when nesting because of their cryptic plumage. The only time they are seen more frequently is in early spring when the males perform twirling aerial displays accompanied by twittering sounds and buzzy “peents” before take-off. I’ve been on several early spring Timberdoodle hunts in hopes of witnessing and photographing this ritual, called the Timberdoodle sky dance, but have only gone home satisfied with beautiful twilight and sunset photos.

I felt terribly guilty when I shifted my position, breaking a twig in the process, launching the Timberdoodle into flight. With an explosive flutter of wings, she almost made me jump backwards as she zipped between branches and then landed just about 100 feet away in a clearing. That brief moment gave me another photo opportunity of her in the meadow and of the nest, an ever so slight depression on the ground, comprised primarily of dead leaves, that cradled four eggs. I quickly backed away and a few minutes later she was back on her nest. I no longer cared about the morels and left the area well-rewarded with Timberdoodles on my mind and locked away in my camera.

I felt terribly guilty when I shifted my position, breaking a twig in the process, launching the Timberdoodle into flight. With an explosive flutter of wings, she almost made me jump backwards as she zipped between branches and then landed just about 100 feet away in a clearing. That brief moment gave me another photo opportunity of her in the meadow and of the nest, an ever so slight depression on the ground, comprised primarily of dead leaves, that cradled four eggs. I quickly backed away and a few minutes later she was back on her nest. I no longer cared about the morels and left the area well-rewarded with Timberdoodles on my mind and locked away in my camera.

The Timberdoodle is without a doubt one of the more unusual birds that thrives in favorable habitat on the wilder side of Oakland County. There is no question in my mind that they see us far more often then we see them. Its true name is the American Woodcock (Scolopax minor) but they are also known regionally across the midwest and eastern states by numerous colorful colloquial names, including bog-sucker, big-eye, and mud-bat in addition to my favorite, Timberdoodle, which is most often used in literature and public nature presentations.

It’s now sizzling hot in this first full week of July. I had all but forgotten about that fruit tree field encounter had it not been for another relativity close encounter while I was jogging one evening along the muddy shoulder of a rural road that cuts through a marsh near my house in northernmost Oakland County. There it was—another Timberdoodle! This one was not sitting motionless on eggs, but instead was actively engaged in hunting for earthworms along the shoulder of the road, something I had read about but never witnessed. Perhaps the rustling of the cattails in a steady wind drowned out my approach. I stood still and watched for about a minute before it took flight as a car approached.

After returning home and doing a bit of research on its hunting technique, I discovered fascinating facts including that they have sensitive nerve endings in their bills that help detect the location of their favorite prey, earthworms. When hunting for earthworms, Timberdoodles probe into soft soil with their well-designed bill, however they are opportunist hunters and will also feast on spiders, crickets, grasshoppers, snails, and grass seeds. After the Timberdoodle’s bill reaches a hidden worm it yanks it out of its burrow. They rarely lose their catch because they can open the tip of their upper bill and then close it on the worm in a vice-grip like fashion. Evolution has been kind to them, for these shorebirds that have evolved to live in young forests, are also gifted with a rough-surfaced long tongue, a perfect tool for securing slippery prey such as earthworms.

I sometimes wonder how many times I have been close to a Timberdoodle nesting site or summer hunting grounds without being aware of their presence while trekking in their habitat, which includes old fields, meadows, and orchards. In fall, at about the time the leaves of sassafras turn fiery orange and pumpkins ripen, our Timberdoodles will fly to southern states for the winter. When next spring comes around, I will be hunting morels again in that secret field of heirloom fruit trees with an eye out for the Timberdoodles on the wilder side of Oakland County.