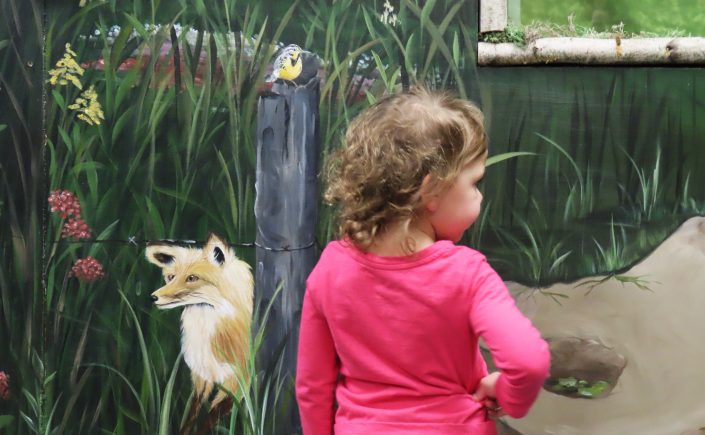 “Every child should have mud pies, grasshoppers, water bugs, tadpoles, frogs, mud turtles, elderberries, wild strawberries, acorns, chestnuts, trees to climb. Brooks to wade, water lilies, woodchucks, bats, bees, butterflies, various animals to pet, hayfields, pine-cones, rocks to roll, sand, snakes, huckleberries and hornets; and any child who has been deprived of these has been deprived of the best part of education.” ― Luther Burbank

That powerful quote from Burbank came to mind last Friday afternoon while I waited in the hall outside of the newly renovated Nature Room at the West Bloomfield Parks Recreation Activities Center for its grand reopening ribbon cutting ceremony. The unbridled enthusiasm of the children in attendance was contagious and increased as the clock counted down to the cutting of the ribbon by Parks Director Jennifer Tucker, with park commissioners and park staff in attendance. While waiting for that moment, some of the excited children, and adults too, posed in the hallway’s monarch butterfly face cutout board for photos while others explored the exhibits in the hall.

The young crowd surged forward as the ribbon was cut and the time for exuberant exploration was on!

The Nature Room is, without a doubt, a fun, educational and exciting place for children, but just as importantly, it may serve as a perfect catalyst to inspire children and adults to get outside and embrace the ways of nature in the woodlands, wetlands and wildlands of West Bloomfield, and the rest of the wilder side of our county. That would be a very good thing in this era where children (and adults) spend countless hours staring at smartphone screens and playing video games, rather than embracing the outdoor world from which we are increasingly disconnected. Author Richard Louv called this phenomenon, “nature-deficit disorder” in his powerful book, Last Child in the Woods (2005). It’s publication increased our awareness on the positive developmental effects nature has on our children and is more relevant than ever today. 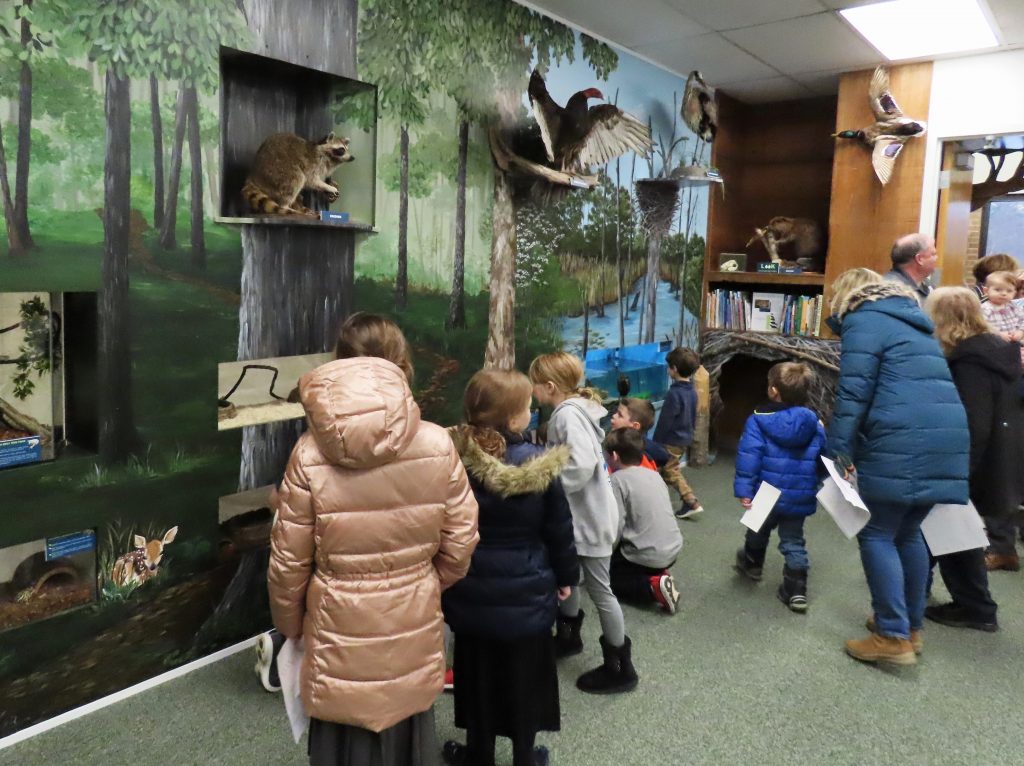 During my exploration of the room, with dozens of children and their parents scurrying about, I saw no one looking at their phones. They were engaged in hands-on nature activities and viewed the murals and wildlife exhibits. As I listened in on conversations, I heard a few kids asking if they could explore outside and look for real animal tracks. Others took turns climbing into the “beaver lodge,” trying on an array of wildlife hand puppets and showing off their butterfly wings.

The nature wall murals that covered two sides of the room were stunning and designed for exploration. The realistic paintings of habitat included temperature controlled tanks built into the wall that held some small creatures, creatures that at first glance might appear to be part of the mural. A closer examination revealed a live gray treefrog perched on a branch and a red-eared slider swimming in a tank, drawing the attention of very young child who watched in awe. But, what really drew my attention was the excited squeal of one youngster that loudly exclaimed to her Mom, “It’s moving!” I walked closer to see what was moving. It was an albino Butler’s Garter snake that she perhaps thought was a realistic prop, but when it slithered forward and flicked its tongue, she realized it was a “real” snake.

Another wall mural displayed a painting of a red fox peering from grasses and a Meadow Lark, a masterful singer perched on a post. That mural also included Eastern Bluebirds that had one child calling them “baby bluey birds.” The mural’s painted pathway led into a meadow of summer wildflowers and when looking closely, other creatures could be seen, including a rabbit and butterflies. What I found excellent is that the mural portrayed creatures accurately and did not depict them as cartoon characters, making the mural a creative teaching tool that stirred curiosity about their lives and natural behavior.

It was not until I noticed kids pointing upwards and talking about birds that I noted the live mounts of a Great Blue Heron, Great Horned Owl, Red-tailed Hawk and a Turkey Vulture, four of the more noticeable “big birds” of West Bloomfield. A live mount of a raccoon also perched over a mural led to a quick conversation that ended with a parent explaining accurately that, “They live in hollow trees and sometimes chimneys.”

My favorite interactive tables were the ones where kids could create wildlife tracks and another one with a large magnifying lens to look at little things including pine cones, snake skins, bones and fossils. Other displays along the wall included replica skeletons and skulls of creatures found in West Bloomfield and a rack holding wildlife puppets. The skunk and praying mantis puppets seemed to be favorites and led to impromptu role playing.

As the afternoon progressed and a cold drizzle accelerated, I decided it was time to thank the park staff for a job well done and then head to the adjacent civic center trails for a rather soggy nature exploration.

I quickly encountered deer tracks as the trail meandered along the west side of the township library and began a slow descent into the woods. As I trudged past a small partially frozen lake, a lone Great Blue Heron that had been standing statue-still next to the open section of the lake took flight. Coyotes are found everywhere in the county and so the set of rather fresh coyote tracks I encountered in the woodlands near a fallen log was not a surprise to me. After about 45 minutes of slow paced hiking in squishy snow and fully enjoying the rainy day trek, I headed back up hill and paused for a spontaneous staring contest with a trail-side fox squirrel that was perched in an almost “prayer-like’” stance.

Come out and explore and you won’t be disappointed. About 70 acres of natural land behind the building offers hilly nature trails to explore seven days a week from 8 am until dusk. The Nature Room is located within their Recreation Activities Center (4640 Walnut Lake Road) and is home to the majority of the department’s scheduled nature interpretive programs. During the month of February, the Nature Room has Open Hours on the 7th from 1pm to 4pm, the 18th from 3 pm to 6pm, and the 22nd from 10 am to 1 pm. The Nature Room is truly a creative, sensory-rich treasure trove of imagination and wonder, things that Burbank would have called “the best part of education.”

West Bloomfield Parks is celebrating 50 years of service to the community this year. Visit their website for details on their anniversary events, 12 parks, facilities, special events, field trips, summer camps, nature programs and classes for all ages.