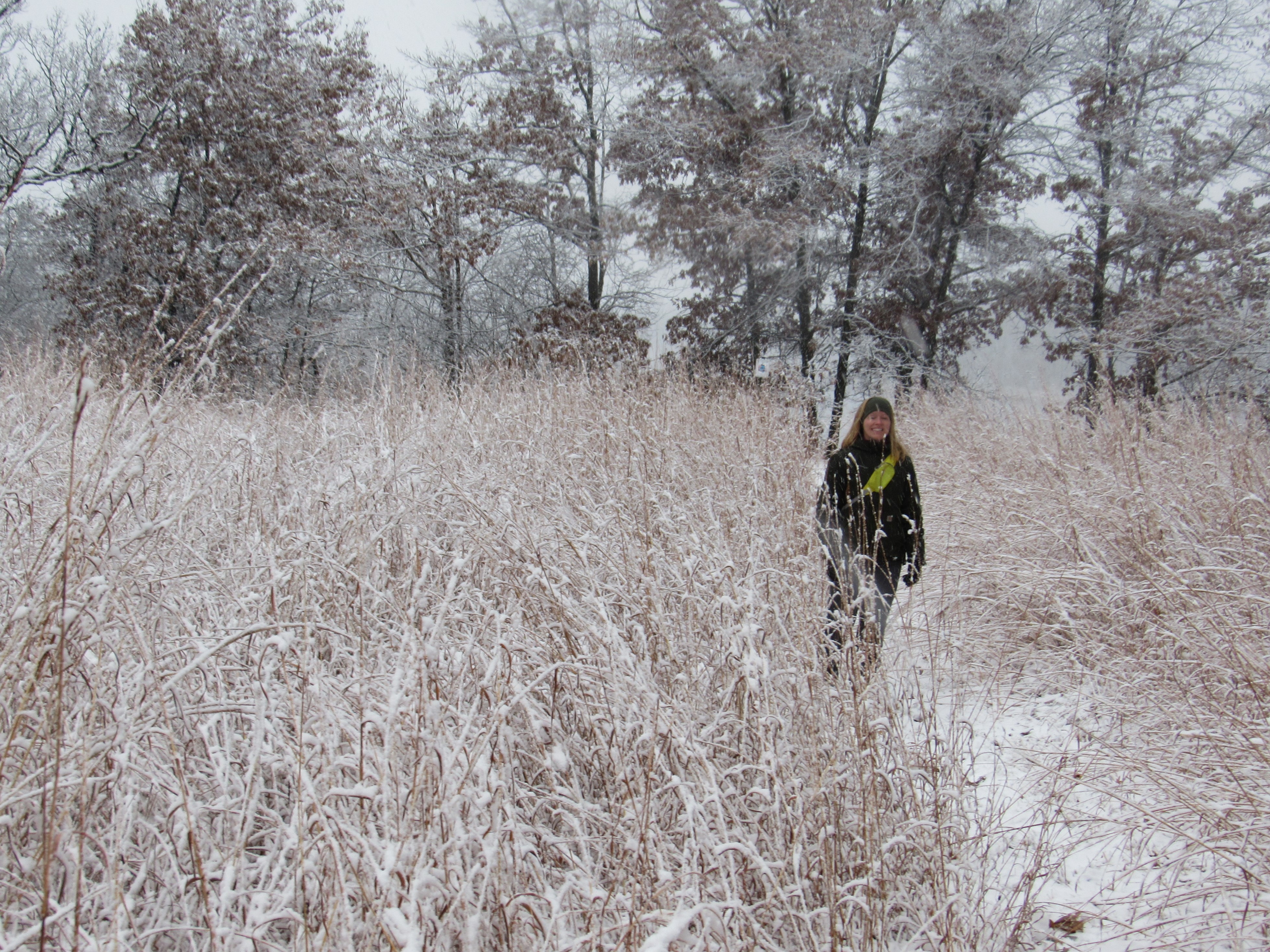 December 1st, Sunday morning at 7:30 – Misty rain was falling across most of the county, but in the higher elevations of northernmost Oakland County, snow was winning out over the hail pellets that bounced off my porch railings. Chickadees and Downy Woodpeckers switched into a feeding frenzy mode at my window feeder in response to my offering of sunflower seeds. They were restless and so was I. I am an unabashed partisan of hiking in almost any weather, even when others would rather stay home. With that thought in mind, I called a friend who would likely be up for an early morning snowy adventure. Forty-five minutes later we were en route on back roads through a world of swirling white to the Lost Lake Nature Preserve, a 537-acre sanctuary that encompasses sections of Oakland County’s Holly Township and Genesee County’s Grand Blanc Township. It first opened to the public in the fall of 2015 and I had been there three times since then, but always as an attendee at official events sponsored by Southeast Michigan Land Conservancy (SMLC) and never in wintery weather.

The preserve is managed by the SMLC and includes a large wetland complex surrounded by mostly wooded hills and sections of grasslands and restored prairie habitat that were once part of an old private airport runway and remnants of old-growth forest. The SMLC website states:

”The Southeast Michigan Land Conservancy conserves natural land and open space — including forests, wetlands, meadows, agricultural lands, and places of scenic beauty — to provide habitat for wildlife and to enrich the lives of people.”

The drive from Ortonville to the trailhead on Evans Road in Holly Township took about 30 minutes as the beautiful snowfall increased, and at times became a situational awareness adventure with a few cars ending up in ditches. While en route we passed a large oak tree that succumbed to saturated soils, ice and high winds during the night and totally blocked a road. We arrived safely and eager to get boots on the ground in the almost hidden preserve lot on Evans Road. 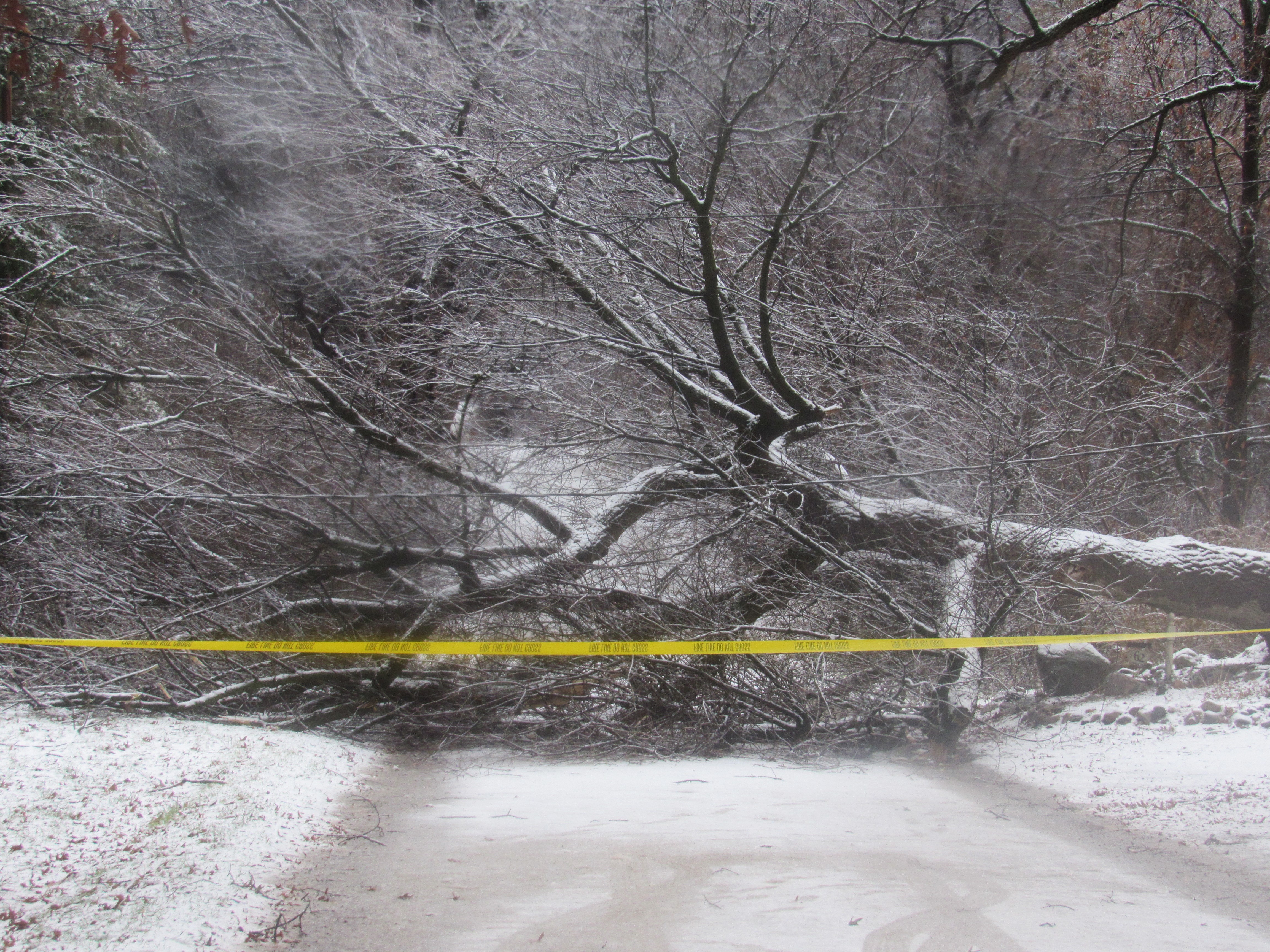 After reviewing the posted rules and the site map at the trailhead, and making note of property lines and the county line, we trekked north along the easy to follow woodland trail, unintentionally disturbing a trailside rabbit, our first of many unplanned nature-exploration stops. The fresh snowfall created nature’s storybook, enticing me to switch into my nature education role. Without being asked, I explained that the larger hind feet of a rabbit land in front of the smaller front feet when it hops and show the direction of travel.

Shortly thereafter she queried me on the dewclaw impressions made by a buck that had crossed the trail. I explained it since something like this: “Each hoof of the deer has two dewclaws on the backside of the leg that are too high up to leave an impression during a deer’s travels, unless the deer bounds through mud or wet snow.” The saturated soils and moist snow made them easy to spot and after returning home and searching the Internet for the reason behind the name “dewclaw,” I discovered that one theory is that the name comes from the fact that a dewclaw rarely touches the ground but only brushes the dew on grass. 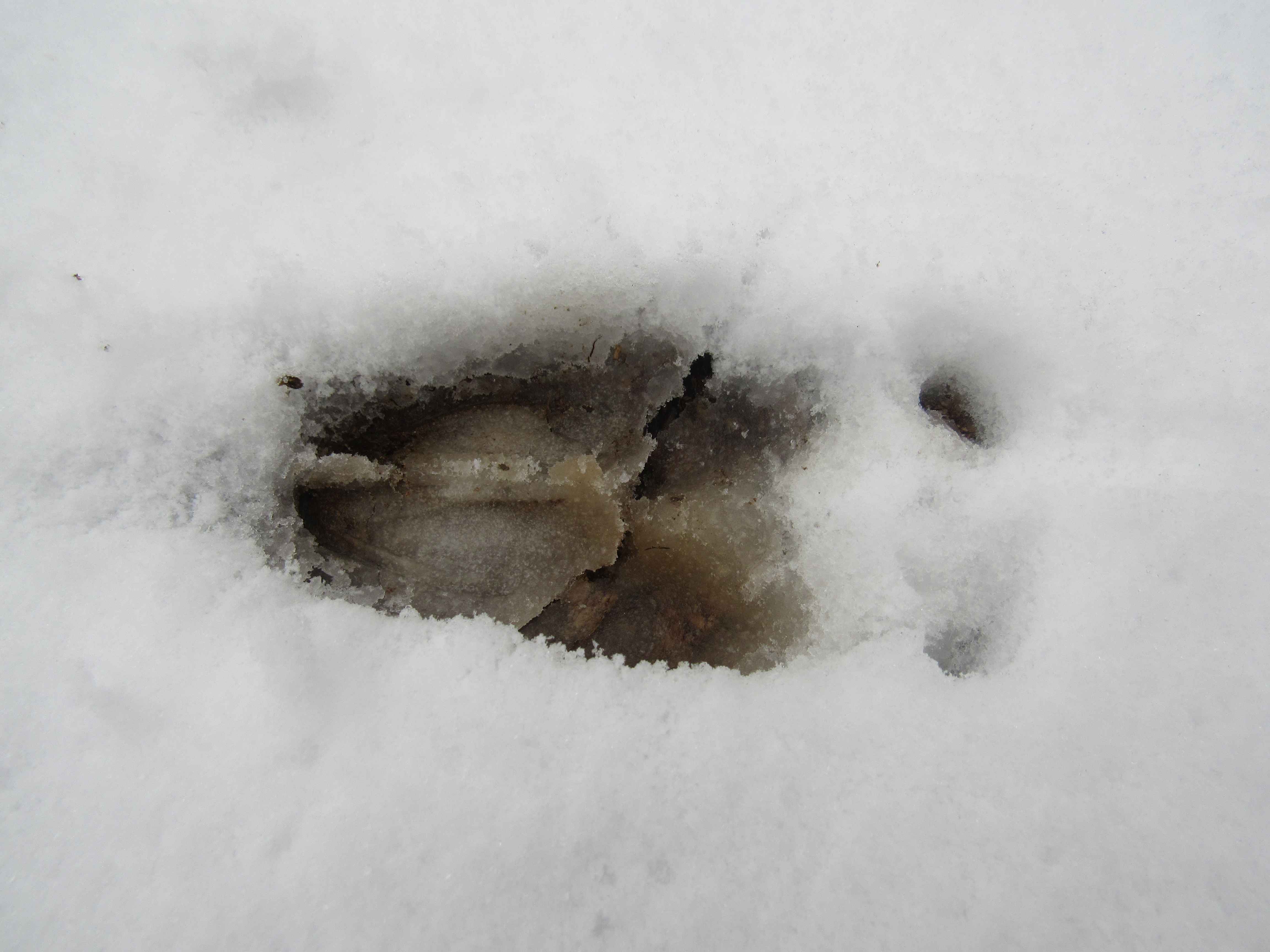 With the fun of our spontaneous “Wildlife Tracking ID 101” behind us we continued along the trail passing through a second-growth woodland before entering a large open area, much of which is now reverting back to prairie habitat with stewardship help from the conservancy. I wondered to myself if that tundra-like open area, once an airfield, might be an alluring rest stop for a migrating Snowy Owl. The gray sky and snow transformed the scenery into an image an artist could paint. We continued westward towards Slack Lake, the larger of the two lakes at the preserve. Just as we walked under a stately oak, a pair of mergansers exploded into flight from the fog-shrouded lake at the base of the bluff. We meandered closer to the lake and noted Mother Nature had been busy with her paintbrush, creating alluring images of shore ice with the consistency of a slushy ice drink that framed sunken leaves from that massive oak.

We bid our goodbyes to the massive oak before continuing down the trail through old-growth forest towards the marshy southeast corner of Slack Lake. For the next few minutes we both practiced what I often preach: we looked about and listened to focus on nature’s way. A Red-bellied Woodpecker pounded away on a tree trunk in search of hibernating insects to the accompaniment of the call of a single crow. A slight gurgle of water drew our attention away from the woodpecker to water from a hillside spring that nourished the wetlands. The diverse habitat that surrounded us made us wonder what species of wildlife may have detected our passing, but remained unseen. I am sure coyotes made the list.

From there it was back uphill through a picturesque winter landscape, with evergreen boughs drooping low with wet snow and ice coating frozen fruits and berries. It was the kind of scene that perhaps would have inspired one of John Muir’s musings, “Everyone needs beauty as well as bread.”

We were about ten minutes away from looping back to the trailhead at the tail end of our 2.5 mile trek when a sudden flurry of movement in the woods drew our attention. A large flock of Wild Turkeys had hurriedly trotted off after detecting our not so stealthy approach. Although they escaped the lens of my snow-splattered camera, the evidence of their snowy morning breakfast activity was unmistakable. The flock had been scratching about under fallen leaves on a hunt for grubs and seeds, our departing snapshot of many magical moments on the wilder side of Oakland County. For more information on the Southeast Michigan Land Conservancy and all their projects and sanctuaries, visit their website.

2 thoughts on “A Magical Wintery Morning”