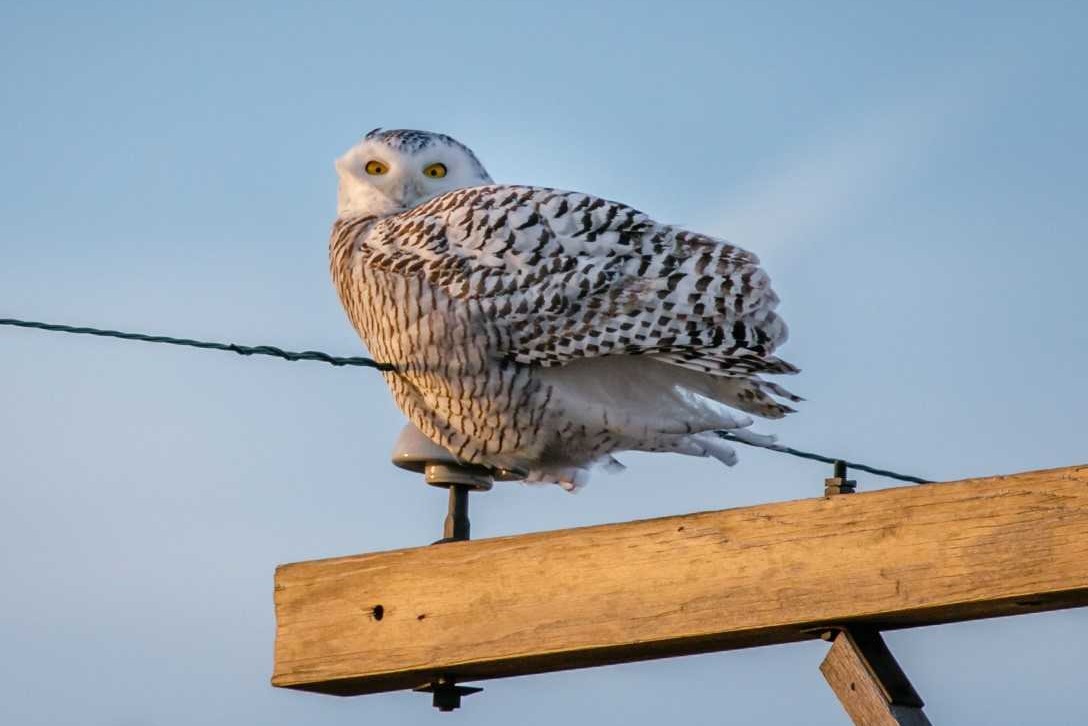 Snowy Owls are charismatic, majestic and mysterious. They are the heaviest of all North American owls with some weighing almost six pounds. Their yellow eyes, massive talons, feathered feet, eye-catching white plumage and diurnal hunting behavior appeal to almost everyone, even people who normally would rather shop in a crowded mall than walk in the silence of a woodland. Naturalists and birders are smitten by their unpredictable movement patterns, and the spirit of the remote arctic wilderness these amazing raptors represent. However, unless you plan on visiting the high Arctic tundra of North America or Eurasia, the chances of seeing Snowy Owls in the wild is usually nearly zero. But maybe not this December.

In North America, Snowy Owls nest as far west as the western Aleutian Islands of Alaska. They breed in rugged arctic landscapes including the Arctic National Wildlife Refuge where Snowy Owls will aggressively drive off wolves that dare approach the owlets in their ground nests. See them in action in this video from BBC Earth.

They are found from the western reaches of the arctic regions of Canada to Newfoundland and Labrador, the most eastern province of Canada. Oakland County is not their home. But last Friday I saw two of these yellow-eyed beauties, and both of them were less than sixty miles from Oakland County. The encounter was not accidental. For the past few weeks I’ve been in daily contact with birder friends and organizations that monitor the migratory movement of these internationally protected, enigmatic raptors that know no borders. 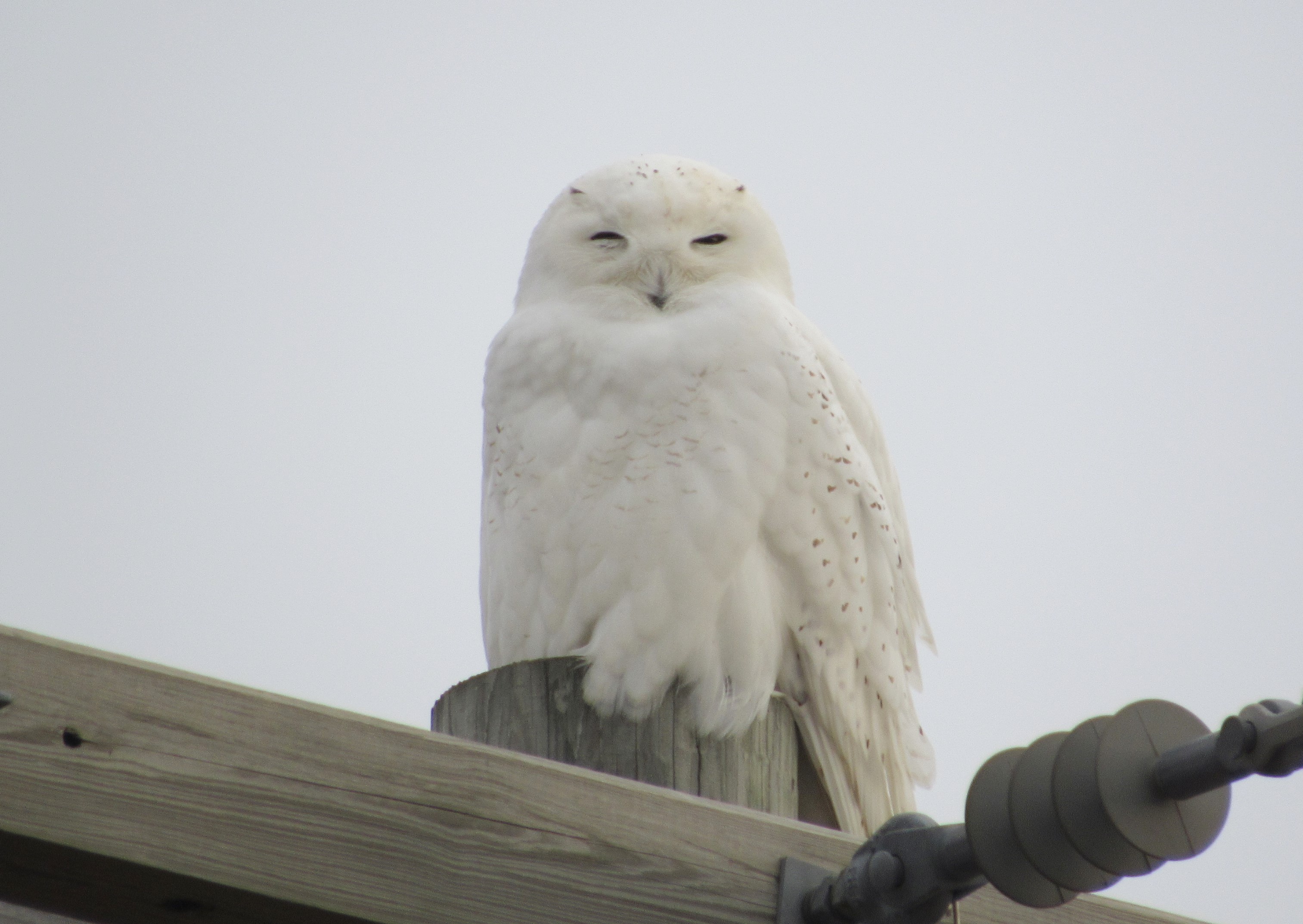 The call I was waiting for finally came late Thanksgiving evening from my Lapeer County birder friend, fellow outdoor writer Jeff Nedwick, “We have confirmed sightings in Tuscola County”. That’s all I had to hear and I was out the door the next morning at dawn. The first two hours of our hunt were fruitless, as we slowly cruised the backroads of Tuscola County farm country paying close attention to power line poles and freshly tilled farm fields. Snowy Owls are active by day and will usually perch high up, on the top of a pole or be seen flying low to the ground, looking for local rodents to substitute for their arctic diet of lemmings. 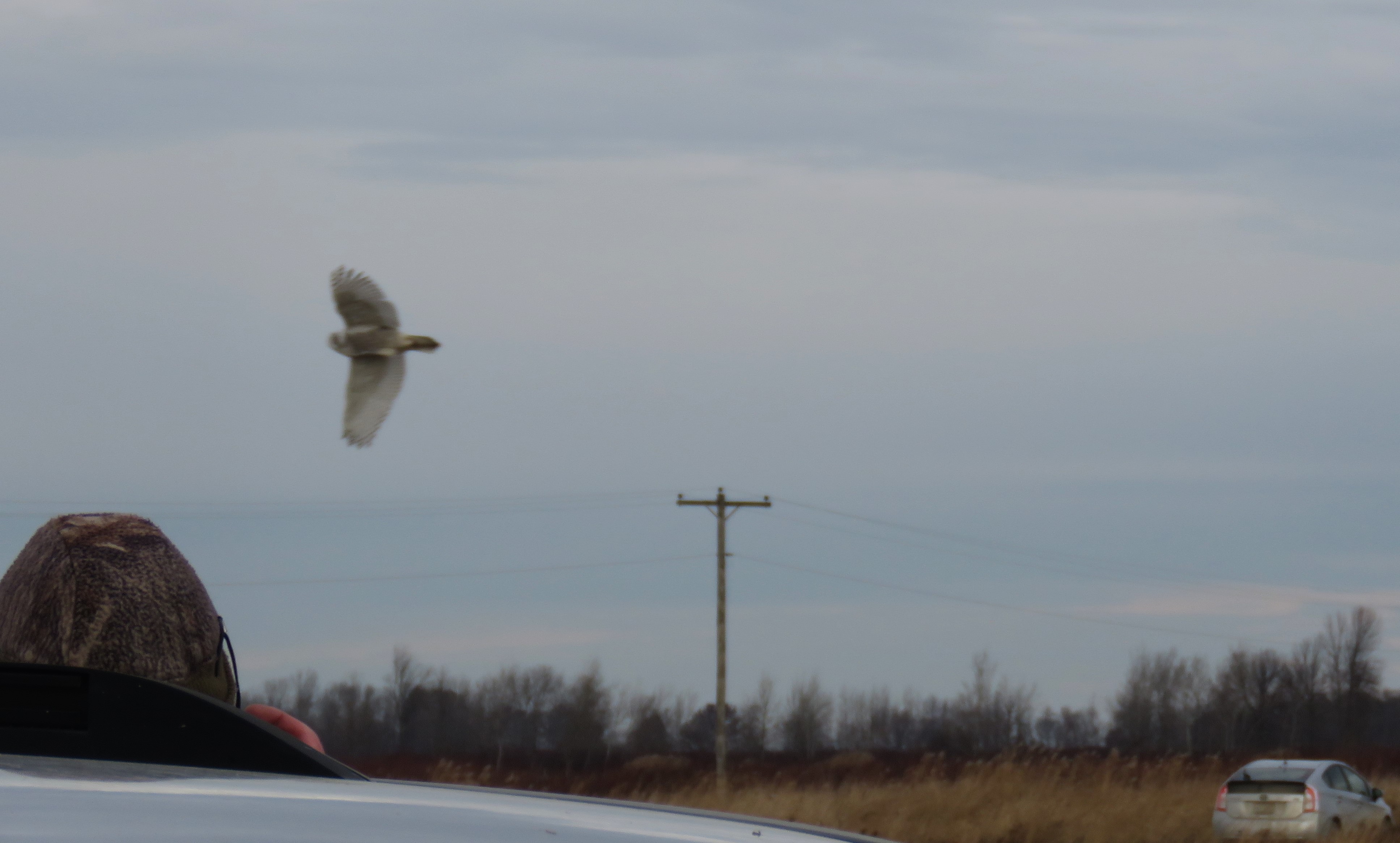 We talked about the possibilities and probabilities of seeing Snowy Owls as we crept along the roads at very low speeds. The possibilities were excellent for Tuscola County, based on the earlier sightings that initiated our hunt, but the ways of nature are full of the unexpected. The probability remained unknown. The night before our owl hunt I studied literature from Project SNOWstorm, a volunteer-fueled Snowy Owl-tracking organization founded after a major “irruption” of Snowy Owls four years ago. Their website emphasized a new Snowy Owl “irruption” appears to be underway. 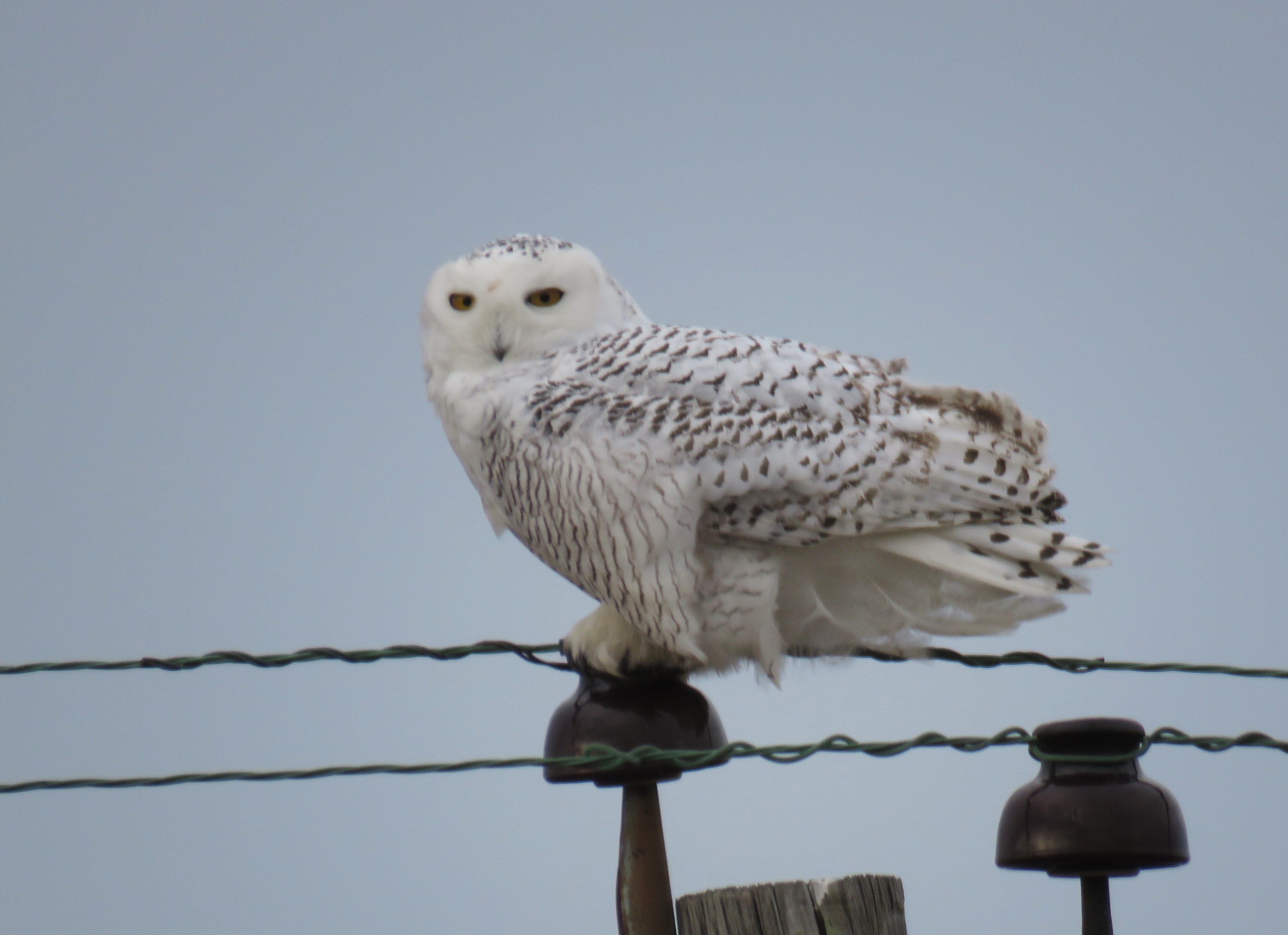 Snowy owls are already appearing all over Wisconsin and the Wisconsin Department of Natural Resources does a super job of explaining the predicted irruption of Snowy Owls.

“Most experts agree these periodic mass movements are associated in some way with their primary northern prey source, a small rodent known as a lemming. Traditional thought suggested that a temporary “crash”, or shortage, of lemmings pushes owls southward in search of food. However, more recent evidence suggests nearly the opposite, that a temporary abundance of lemmings allows the owls to successfully raise large families, and then these young owls disperse southward by the hundreds to avoid competition with older birds for winter territories. It’s even possible, perhaps likely, that not all irruptions are created equal and both mechanisms play out in some years. Unfortunately, the population dynamics of lemmings are complex and poorly understood. The same can be said for snowy owls, in large part because of the remote northern haunts they occupy most of the year. This no doubt elevates their intrigue but serves as a barrier to understanding and ultimately conserving the species.” 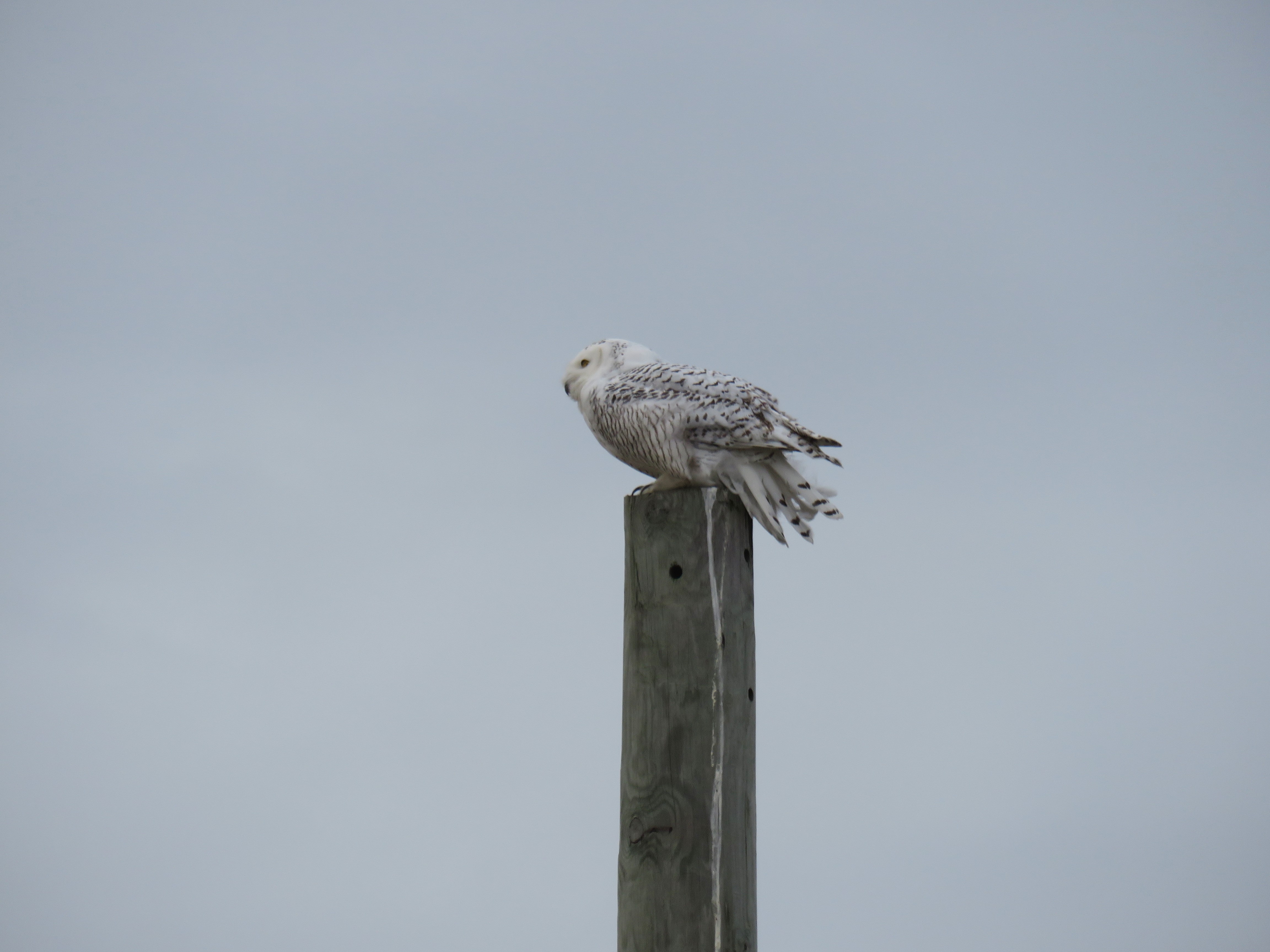 Scott Weidensaul, one of the directors of Project SNOWstorm, says the clues point to a big irruption, but the group also fully admits there’s no way to definitively know how big it could be or if it will even happen at all. “There’s a little bit of voodoo and black magic in all of this,” Weidensaul said. One of the clues of an irruption is the sudden appearance of Snowy Owls where there were none before. That tells me, it’s happening, and Oakland County residents need to be watchful for these snowy white migrants. 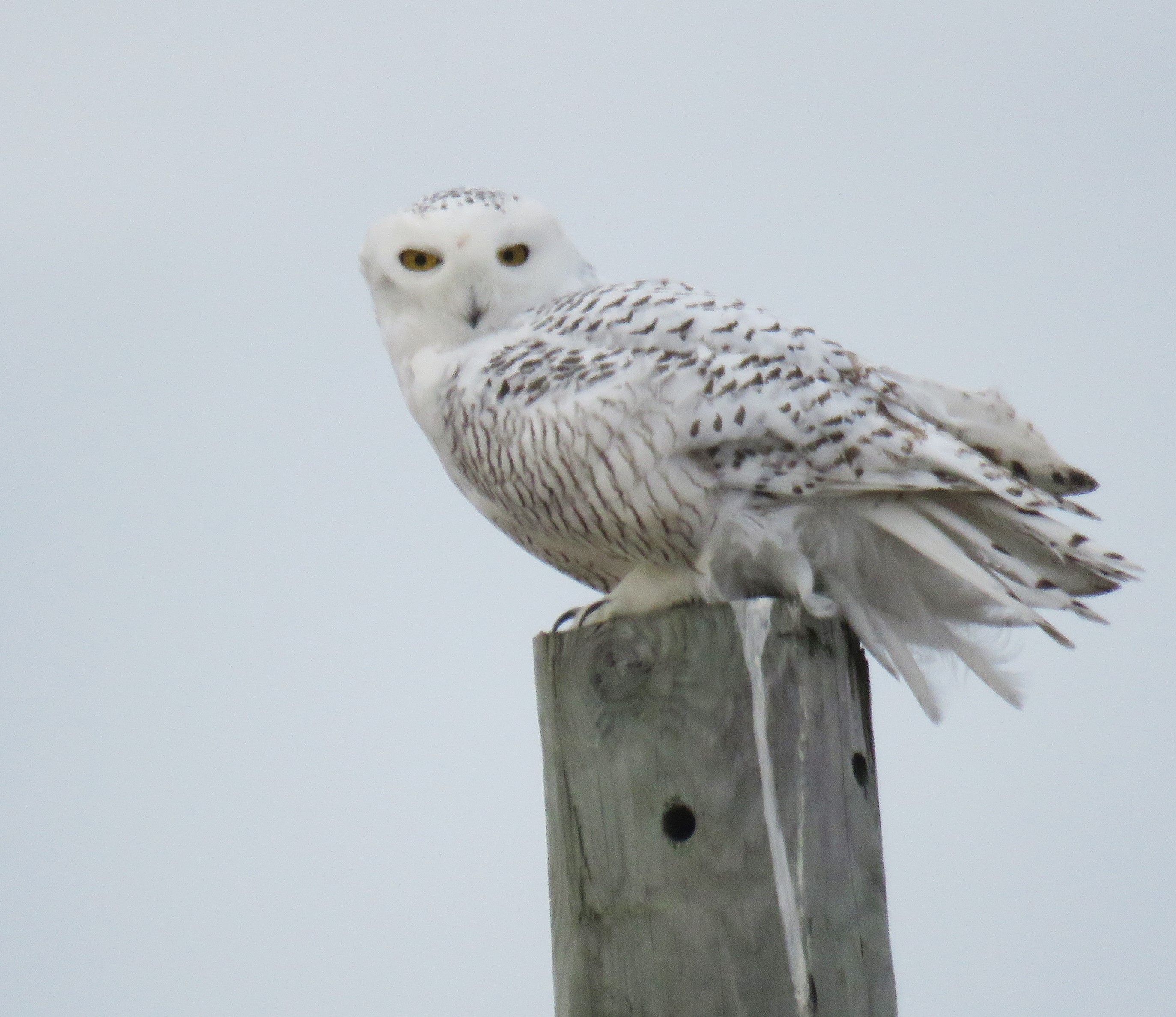 Our car conversation came to a screeching halt adjacent to the parking lot of the Fish Point State Wildlife Area check station. Something big and white was on top of a large pile of gravel about 100 feet from the road’s edge. And there it was: a Snowy Owl perched stoically on that gravel pile just a few dozen feet from parked vehicles. For the next 20 minutes we stayed in my car and took photos through the open window as the owl would slowly rotate his head from the marsh to the human observers and back again. We left that owl to perhaps dream about mallard ducks and drove about a quarter of a mile before another Snowy Owl suddenly erupted from the ditch area alongside the road, flew directly in front of the car, and then gained elevation and perched on top of a power pole. We speculated it may have just dined on a young muskrat or perhaps a meadow vole. As we settled in to watch, quickly joined by other birders, the owl turned to face into the wind making it easy for us to see the heavily feathered body from the top of the head down to its enormous feet. We repositioned the car, which functioned as our blind to capture a short video of the owl.

Scott Weidensaul doesn’t blame people for wanting to see Snowy Owls; the birds are a rare glimpse of Arctic life that deserve all of the attention, but he also advises to watch from a distance to let them rest and hunt. I’ve been asked in the past few days the best places to look for them locally. There is no correct answer except for saying you will not find them in our woodlands. The Cornell Lab of Ornithology states, “Whether the tundra or the Great Plains, an airport field or beach dunes, Snowy Owls like treeless places and wide-open spaces.” However, these nomads of the north, a symbol of the high arctic, may appear anywhere as they migrate southward, even in populated places such as Oakland County. They are most comfortable in habitats similar in appearance to the arctic tundra they consider home. Keep in mind they have had little, if any, contact with humans back in their arctic breeding grounds and they may appear in urban and suburban settings. Many of the owls that move south during an irruption are young owls and have never seen a car, a city or a human.

Oakland County habitat that may attract Snowy Owls during the irruption include, but are not limited to, the edge of wetlands and shorelines of lakes, open meadows and large fields, golf courses and if winter every really arrives, near large frozen bodies of water. Some of our Metroparks and county parks have wide open spaces that may lure in a Snowy Owl, including Stony Creek Metropark, Indian Springs Metropark and Kensington Metroparks, as well as Addison Oaks, Independence Oaks, Lyon Oaks, Rose Oaks and Orion Oaks county parks. The large open fields of Seven Lakes State Park, Bald Mountain State Recreation Area, Highland State Recreation Area, Pontiac Lake State Recreation Area, and the adjacent runways of Oakland County International Airport are also attractive (unfortunately, Snowy Owls sometimes take to airport habitat, an unfortunate and potentially dangerous situation). 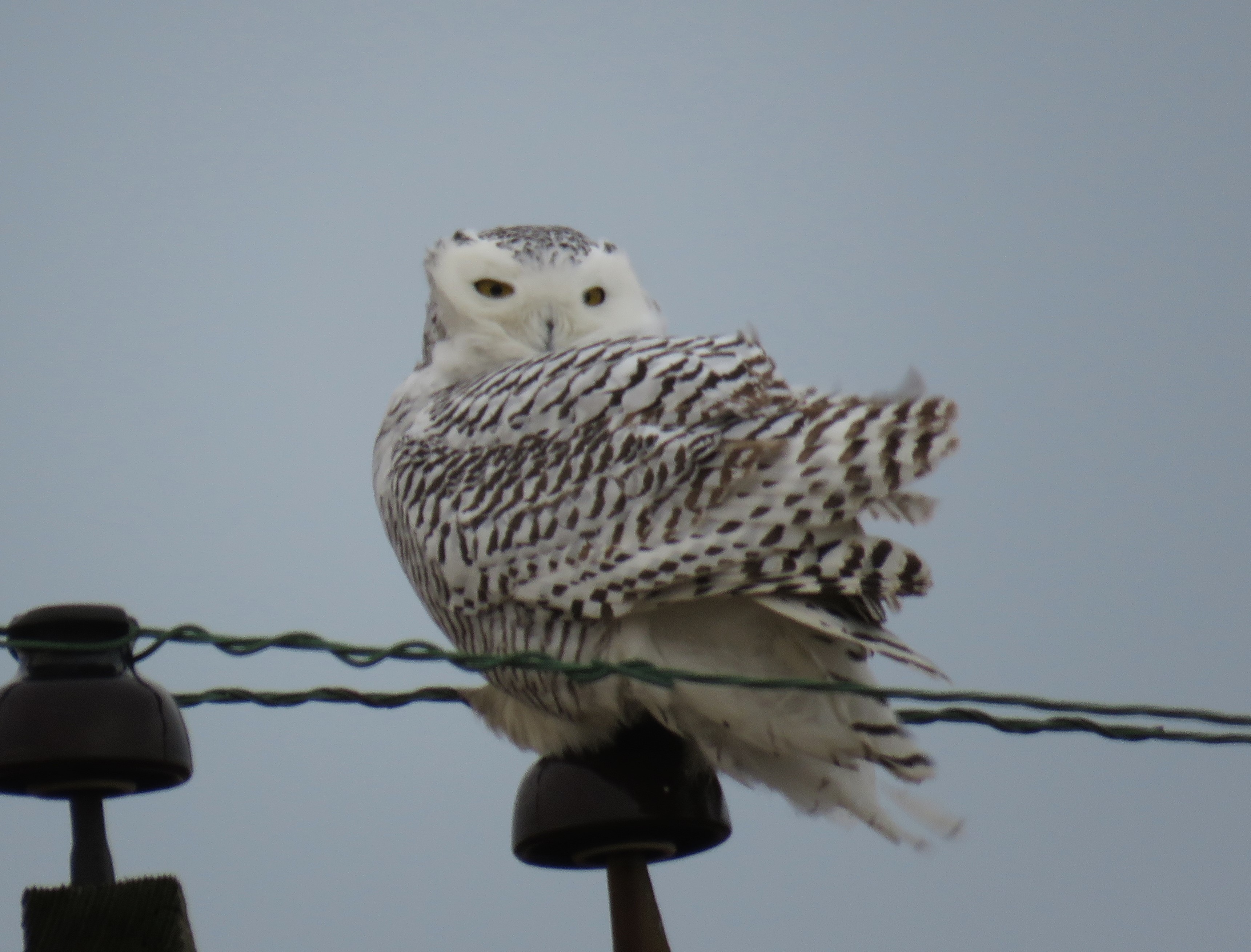 Seeing a snowy owl in the wild during their migration is an exhilarating experience, whether by chance or after an intensive hunt, most often done by walking or driving slowly, stopping often and looking. I quickly discovered that “illusions of reality” often take hold when scanning the horizon with hopes of seeing a perched Snowy Owl, or one standing in a tilled field, perhaps on a fresh kill. White trash bags, buckets on farm posts and almost anything else that stands out and appears white may make the human eye think it just saw a Snowy Owl. Forget everything you may have done on traditional night hikes in search of our resident Screech Owls, Great Horned Owls and Barred Owls. Almost all sightings of Snowy Owls occur in the daylight hours and they are seen most often perched in plain view. They will perch on anything, including billboards, large signs, barns, rooftops, hay bales, telephone poles, buoys, lakeshore breakwalls and even the tops of muskrat and beaver lodges, especially if the adjacent water is frozen.

The crisp cold days of early December are the perfect time for a hike on the Wilder Side of Oakland County. An exploration along a rural meadow, golf course, farm field or quiet lakeshore may bring an encounter with the most amazing owl you will ever see. But stay alert wherever you are; encounters may occur in the most unexpected areas. A Snowy Owl was confirmed this week in a highly developed area of the City of Madison Heights. I feel lucky, encountering two in one day, but I will keep looking, and now look closer to home. You should too. For detailed natural history information on Snowy Owls visit the Cornell Lab of Ornithology website and for updates on the Snowy Owl irruption visit Project SNOWstorm. 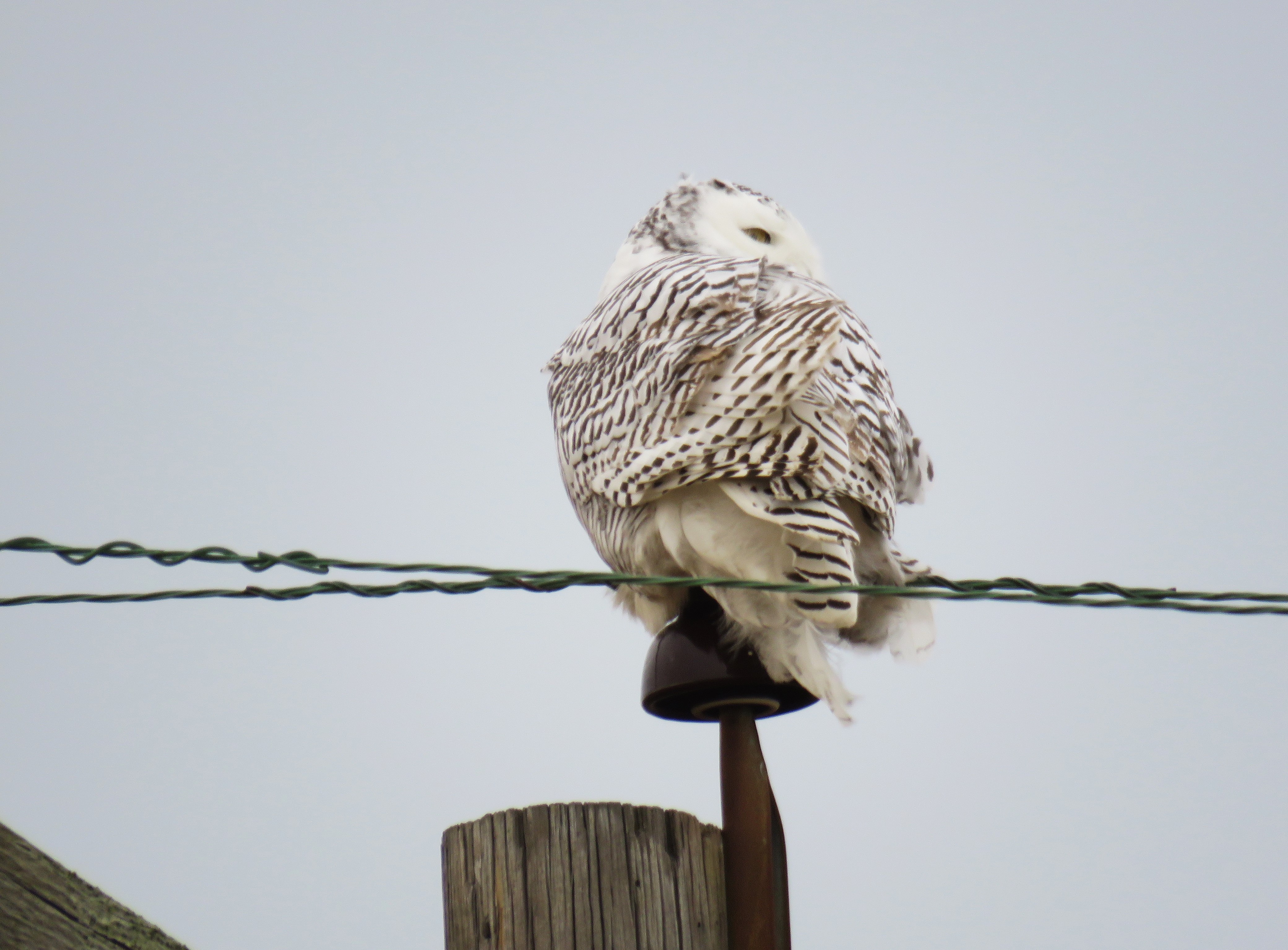 NOTE: All images were captured with telephoto lenses

2 thoughts on “Snowy Owls: Visitors from the Arctic Wilderness”