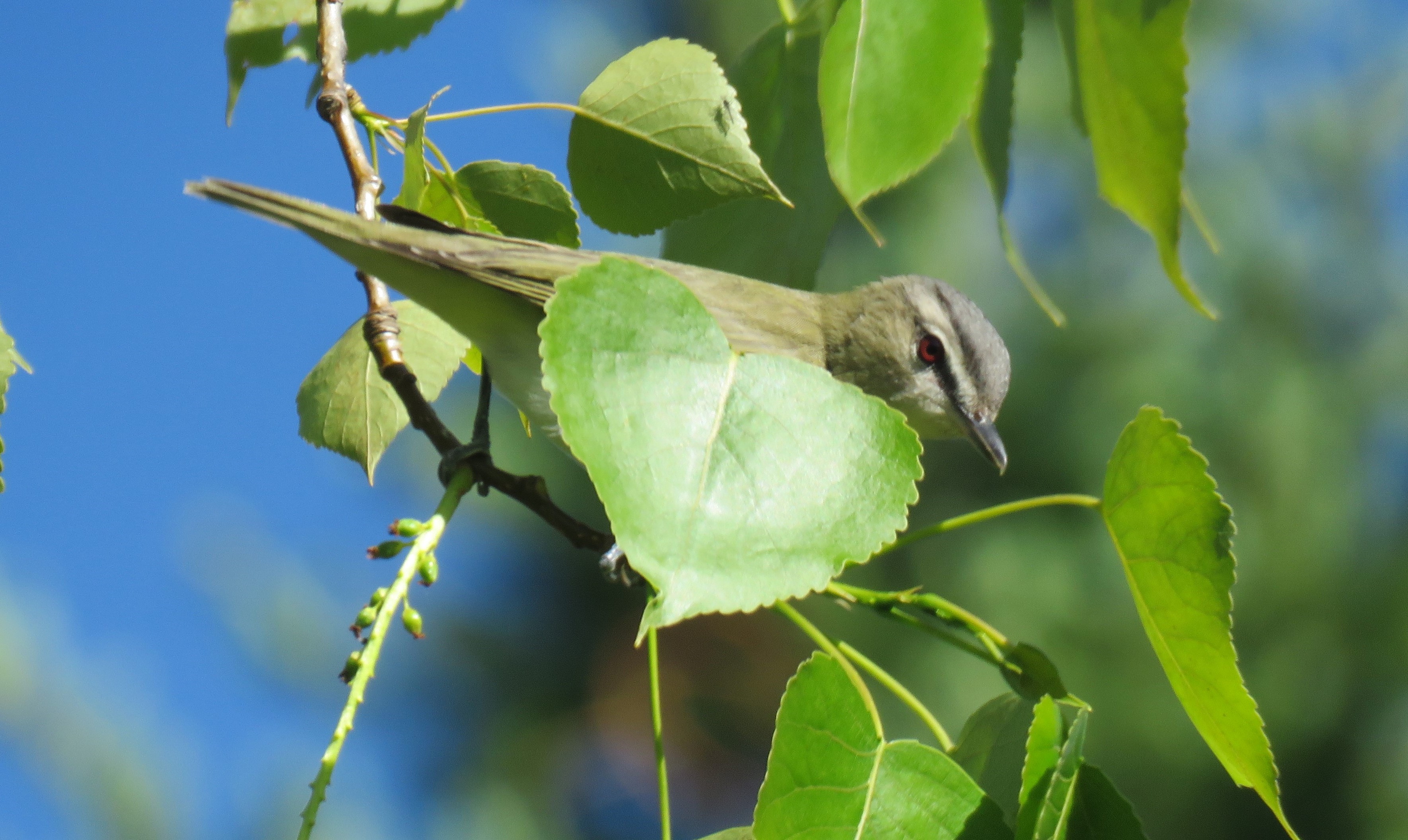 I am not a bird-watcher or at least I did not think I was. Here is what I do know:

Hundreds of thousands of folks across our country, maybe even millions, are serious birders that create what the birding in-crowd knows as a ‘Life List.’ That cherished list is a record of every bird species they have ever seen and identified with absolute certainty. I would be ruled out from those prestigious Life List clubs almost instantly because of the words, ‘absolute certainty.’ To my untrained eye and short attention span, a warbler is a warbler, even though 54 different species of warblers are found in North America. I even struggle to find subtle identification marks on many of our common song birds of summer such as the Red-eyed Vireo.

One could say I am just too restless and easily distracted by furry and fanged creatures to focus on a list of birds; I don’t even make shopping lists. People that pursue their personal hobby of chasing after birds to put another name on a list, will think nothing of driving hundreds or even a thousand miles to view a rare species a few days drive away. “Hey Joe, Judy just saw a rare Blue-Beaked Bobolink in the Florida Keys, up for a road trip?” And they are off, driving day and night to add one more name to a list. That’s not for me. 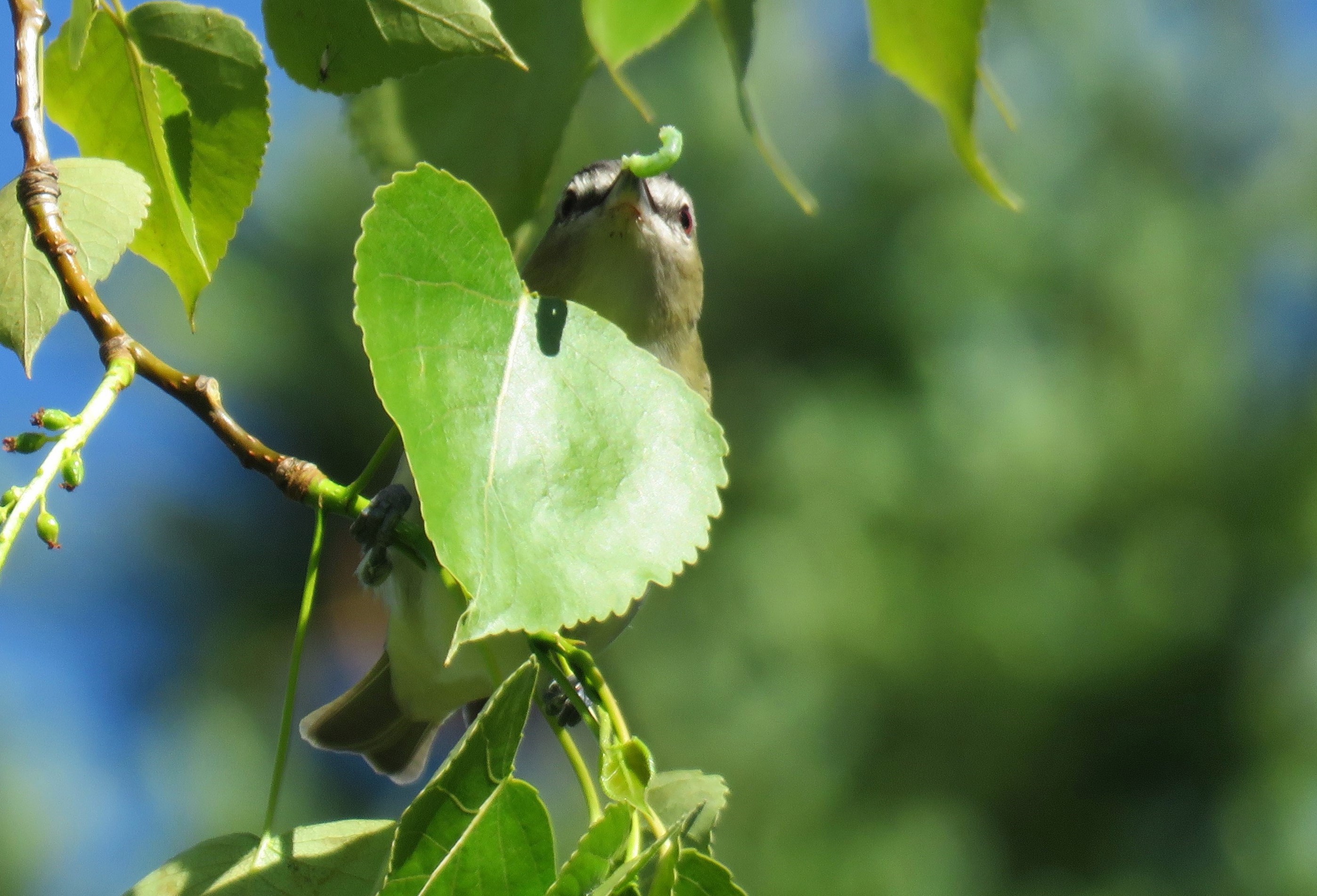 I’ve had my birder friends tell me that if I don’t want a Life List, try a State List, an Oakland County List, or even a Birds at my Bird Feeder List. My answer has always been: No, No, and No. Then something funny happened, and it started with that Red-eyed Vireo, but at the time I had no idea what name that bird carried. It was the bird’s behavior that drew my attention. It kept flitting about the leaves in the upper branches of an aspen tree without any notable purpose. I know that eons of evolution and natural selection add purpose to most wildlife action, so I zoomed in with my telephoto lens for the answer. That mystery bird with a strange reddish eye was hunting and gobbling down tiny green caterpillars, Wow! That was kind of cool to me.

If my job was to name birds, I would have proclaimed it the ‘Red-eyed Green Caterpillar Gobbler’. It took the help of a passionate Facebook birder friend to discover its real name was a Red-eyed Vireo; those green caterpillars are a delicious delicacy for my newly named winged friend. A fact check with the Cornell Lab of Ornithology revealed more facts:

“They forage in deciduous canopies where they can be difficult to find among the green leaves. They move slowly and methodically, carefully scanning leaves above and below for their favored caterpillar prey. However, their habit of near-incessant singing in summer, even in the heat of mid-afternoon, helps draw attention to them.”

That’s when it struck me, I am a birder, but not a birder drawn by a list. A birder lured by behavior, especially eye-catching behavior, like learning the name of the seagull that seemed to be throwing up in the mouth of its companion. Yes, you read that right. 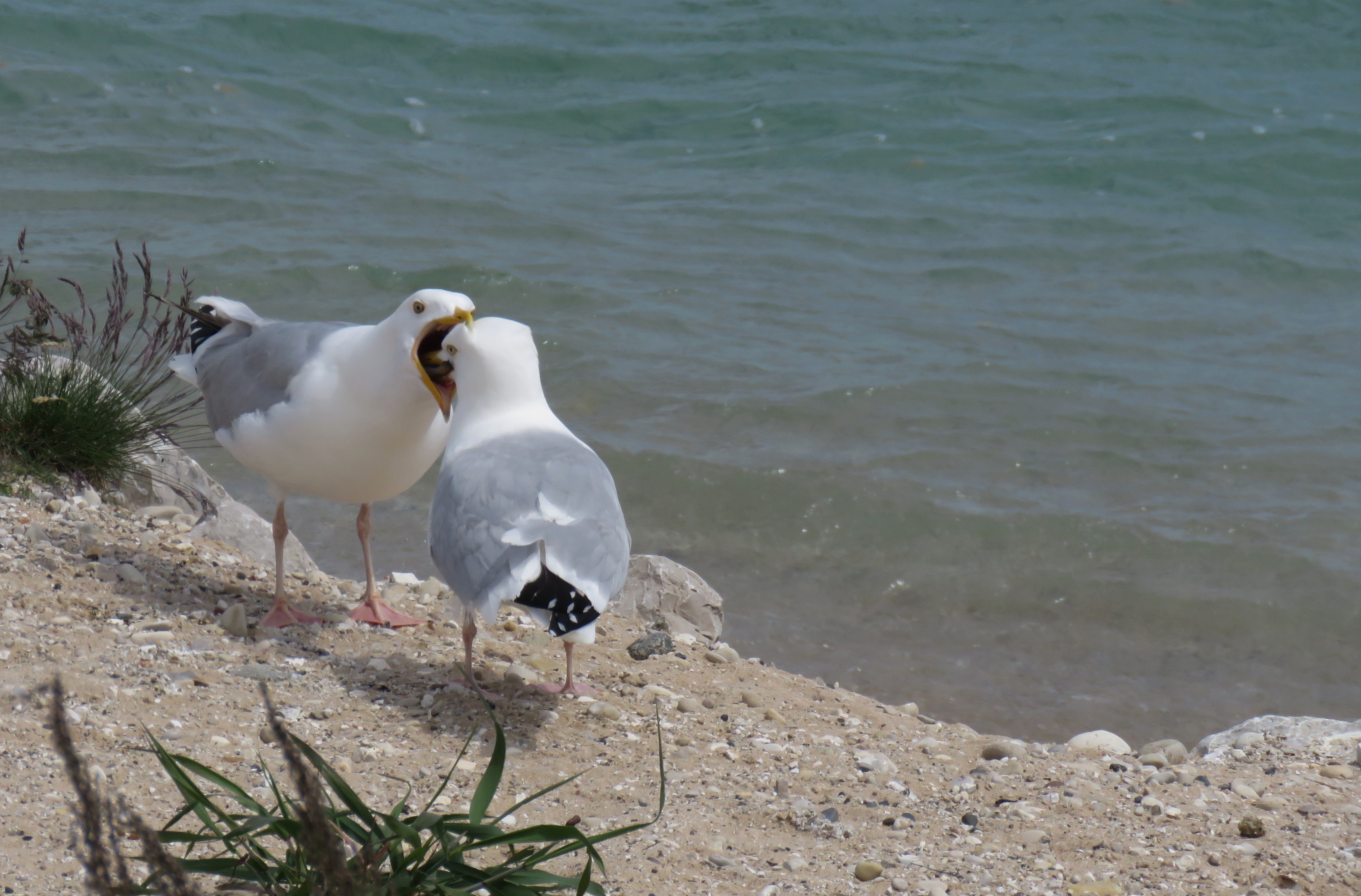 I notice birds usually while I’m relaxing and enjoying nature: hiking, fishing, kayaking, or sitting near water eating lunch. The case of the regurgitating Herring Gull had me confused until I did a bit of research and consultations with Life List friends. Turns out that I witnessed and photographed a romantic gesture. Human males might bring a bouquet of flowers to a female of interest, but with the gulls, nothing says, ‘I love you,’ more than a mouthful of partially digested minnows. 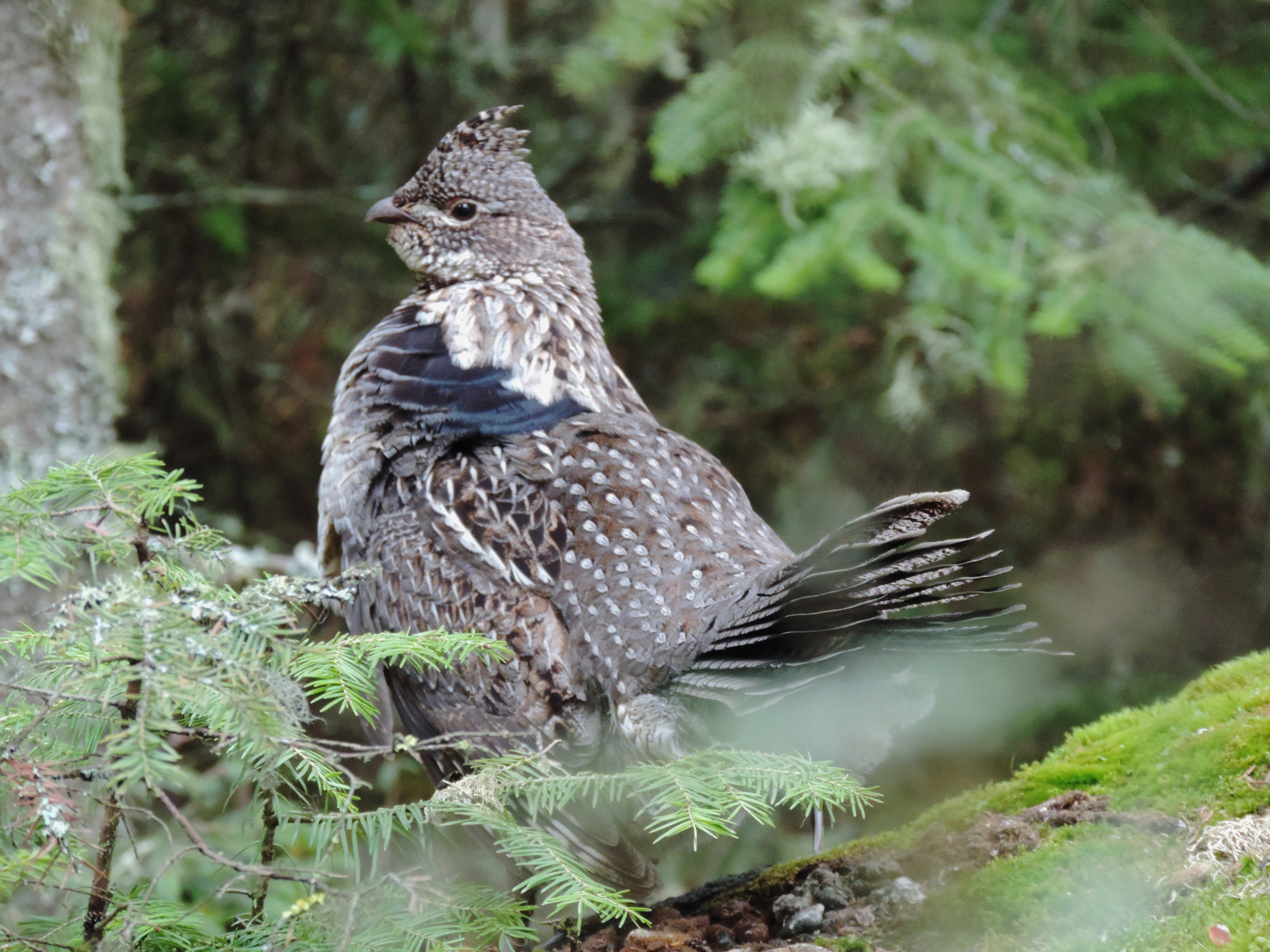 Another bird that might make my potential ‘Strange Behavior’ list, but not as strange as the courting Herring Gull, is the Ruffed Grouse. It is not the most common bird in Oakland County, but I had the pleasure of listening to a male grouse woo a lady grouse at Indian Springs Metropark. Then, I photographed one the following spring drumming in the wilds of Ontario. During mating season, the male grouse hops up onto a fallen log or similar show-off stage, puffs his feathers up and then beats his wings in a super-fast fashion. This creates a rapid-fire drumming sound, something akin to an old tractor engine struggling to turn over. That’s my kind of birding! 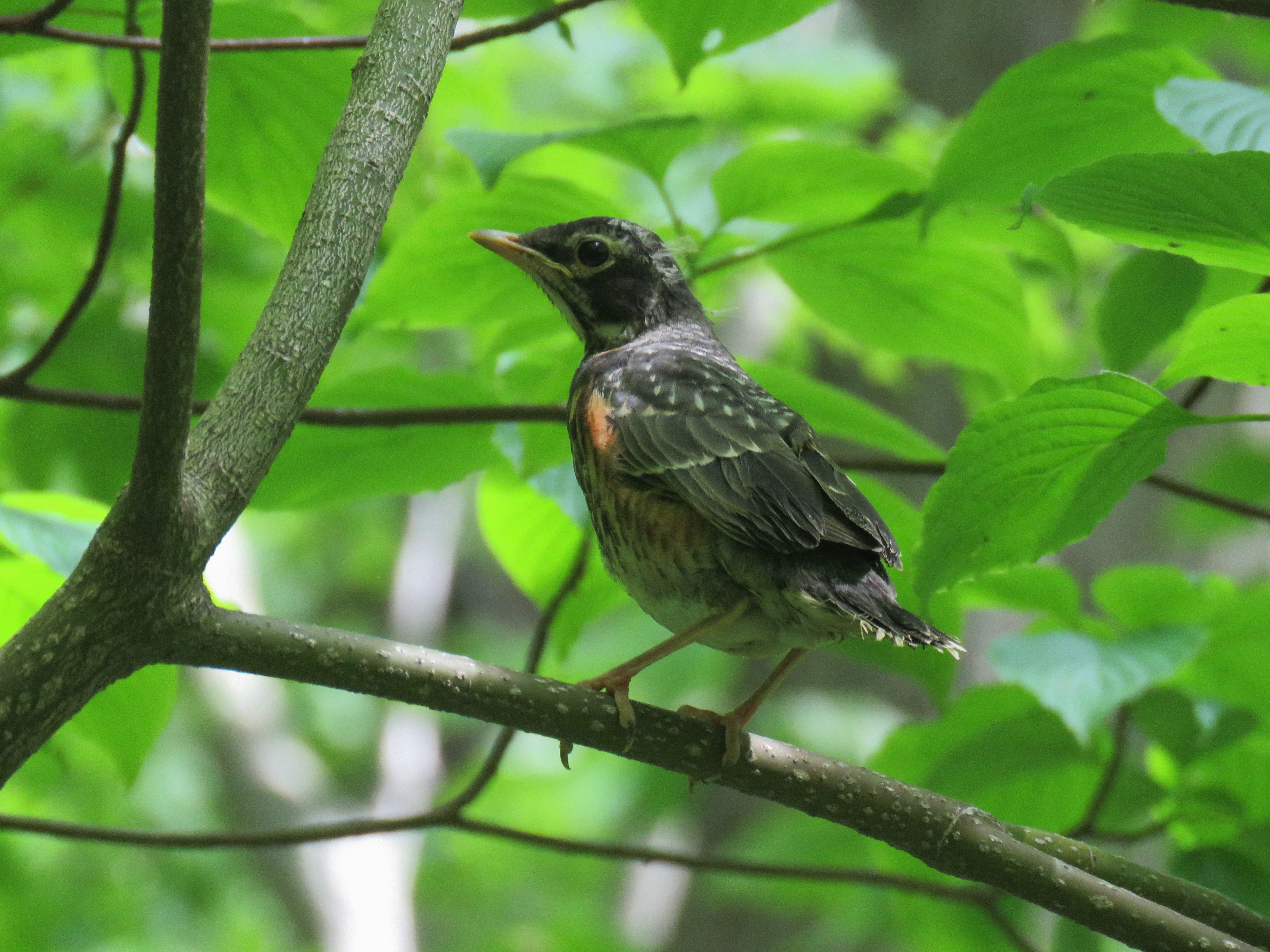 The American Robin is the quintessential early bird of spring. Many spend the entire winter in Oakland County, hidden away in woodlands and shrubs munching on wild dried fruits before it’s time for worm-slurping on suburban lawns. Putting a robin on a Life List would seem silly to me, but in late spring, I’ve noticed strange behavior of the fledglings, newly winged robins that can barely fly. When I walked in woods and encountered a fledgling, it seemed to ‘freeze’ in place instead of flying away. As it turns out, that behavior is not so strange after all, but something of a defense mechanism: if I don’t move you can’t see me. Perhaps it works, for many survive to adulthood when they can take steady flight to flee predators; that might even include red squirrels and chipmunks. That bird would make my, ‘I Did Not Know This’ list. 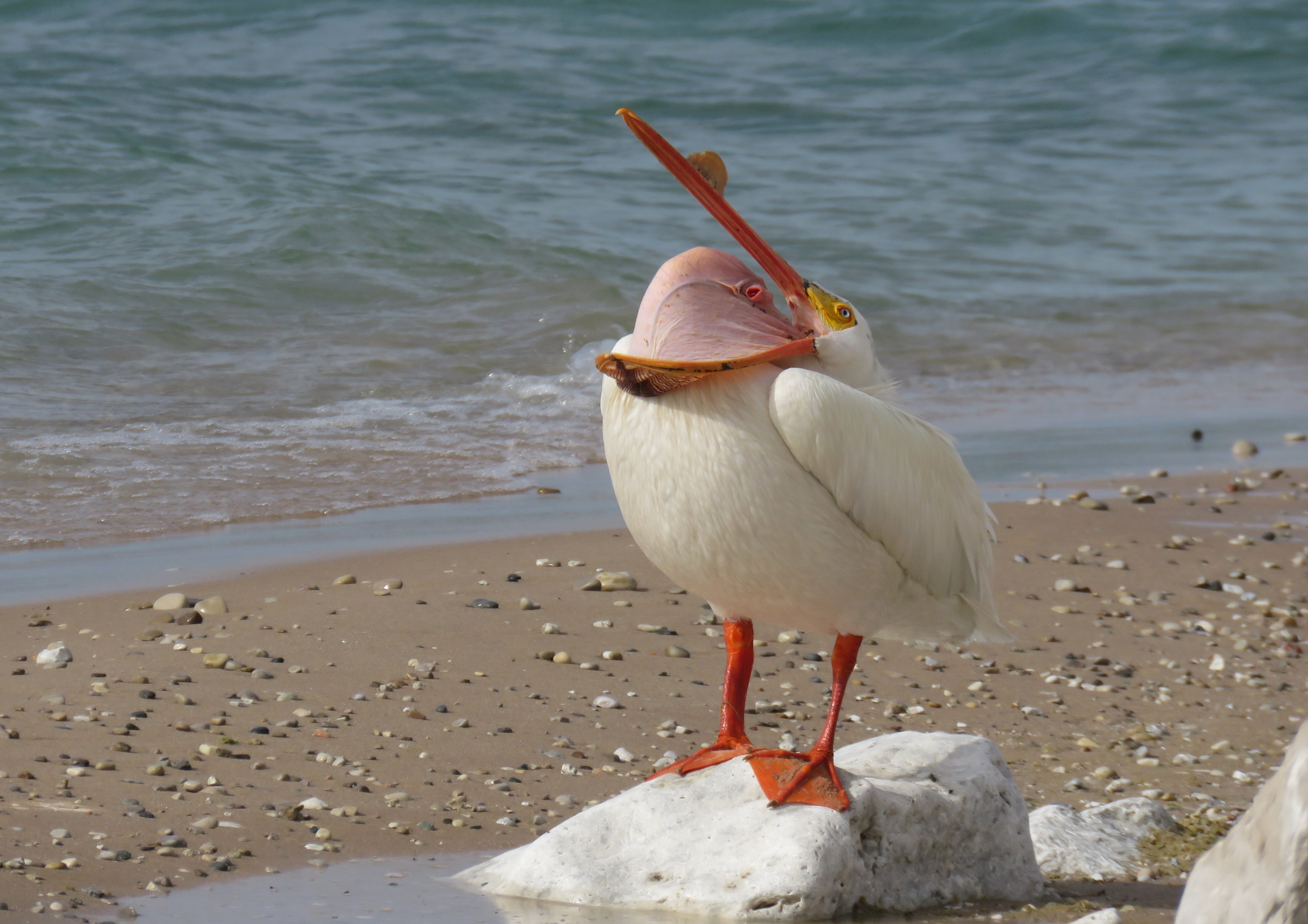 The one category I would certainly create, and I guess I already have, is the, ‘What Did I Just See’ list. The category that helped inspire my thoughts on Life Lists and transforming me into an accidental birder occurred a few weeks ago at Sleeping Bear Dunes National Lakeshore’s South Manitou Island where I encountered an American White Pelican perched on a rock, yawning in the morning sunlight. They are massive birds with a wingspan of eight feet. Lucky me, I climbed up the adjacent lighthouse tower where I could photograph it in flight from above, something that most birders with Life Lists will never be able to do. Follow-up research with birders in Oakland County confirmed that pelicans have been appearing this year at Pointe Mouillee State Game Area in Monroe County. A few of them have actually startled suburban lakeshore residents in Oakland County. It’s fair to say I have transformed into an accidental birder, a title that perhaps suits me well when I wander the woods, meadows, and lakeshores of the Wilder Side of Oakland County. As for my Life List, it remains with my non-existent shopping lists. 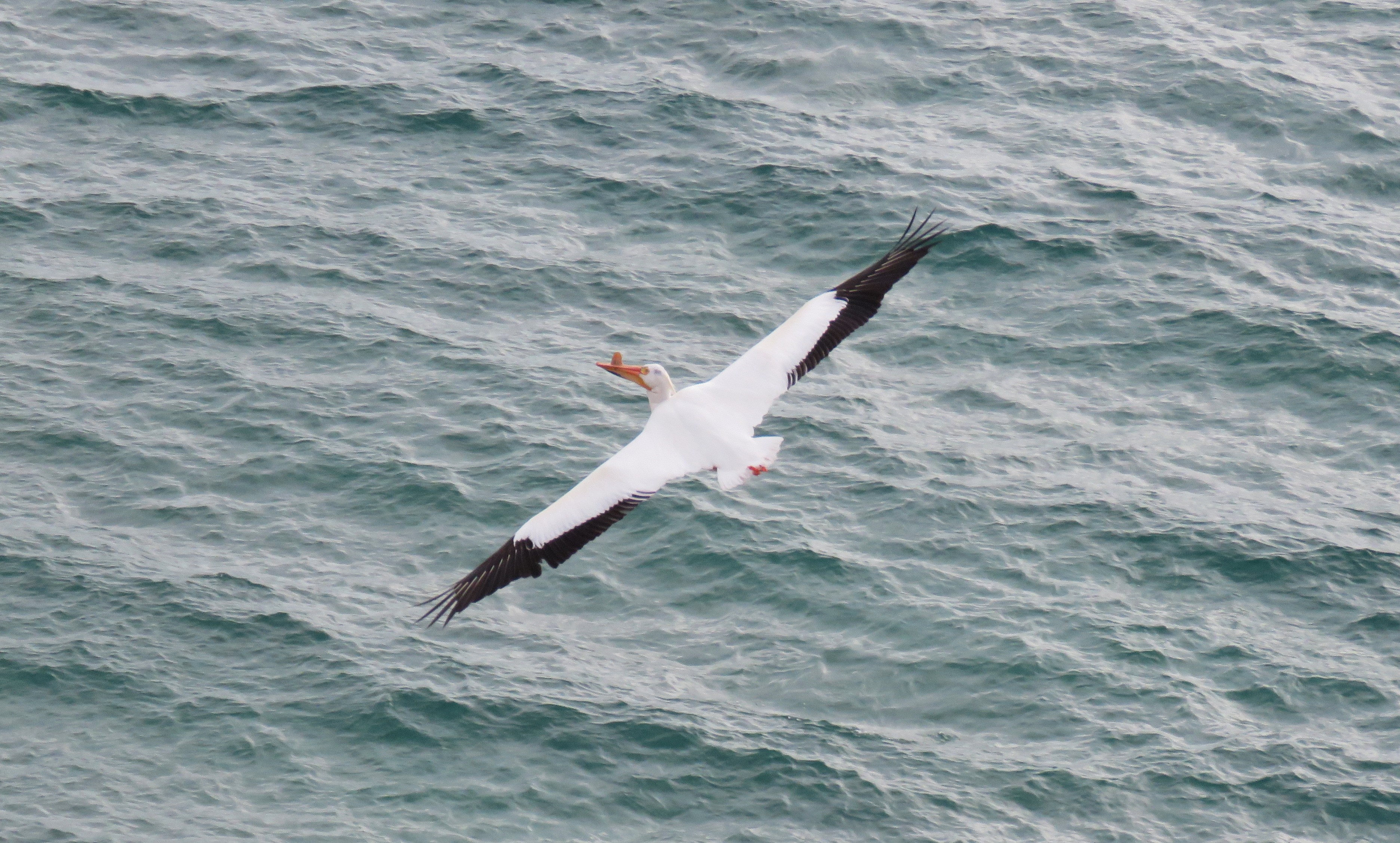 2 thoughts on “Confessions of an Accidental Birder”