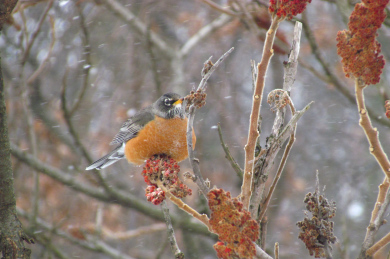 Sub-zero temperatures and the near arctic conditions of this polar vortex winter have not phased robins. However, the sightings of robins in the midst of a world of snow and ice have caused concern among humans.  No need to worry!  Robins do not usually migrate and the fact of the matter is clear; robins are not the first bird of spring.  Oakland County is home sweet home 12 months of the year.  The first bird of spring myth is perpetuated when near breathless television newscasters announce the presence of worm-slurping robins hopping about suburban lawns just as soon as snows melt and the lawn turns green. 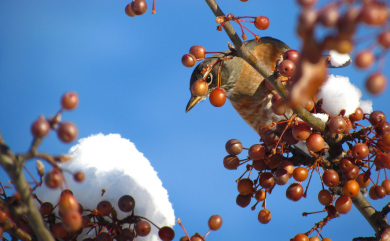 Wintering flocks of robins can be found in our parks and along the edges of golf courses and in scrublands, thickets and woodlands.   Why don’t we see them more often?  That’s easy. We tend to be indoors!  And contrary to common belief worms are not the main diet of robins.  Robins are omnivorous.  Fruits and berries are their usual entrees; juicy worms are just a seasonal protein rich delicacy.  Oakland County is a farmers market of goodies for robins even during the harsh days of winter.  Nature’s abundance and landscaping practices have created winter cornucopias of crabapples, hawthorns, highbush cranberries, bittersweet, poison ivy, sumac and other small ornamental fruits and berries. 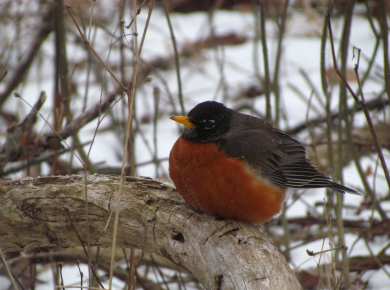 Cold is not an issue for robins.   When the mercury plummets and winter winds-howl they hunker down among shrubs and puff up their feathers creating insulating layers of down.  To create heat they shiver, a process that keeps their bodies at a cozy 104 F.  But I wonder if perhaps robins are not dreaming of plump worms just as humans dream of the first warm season barbecues.