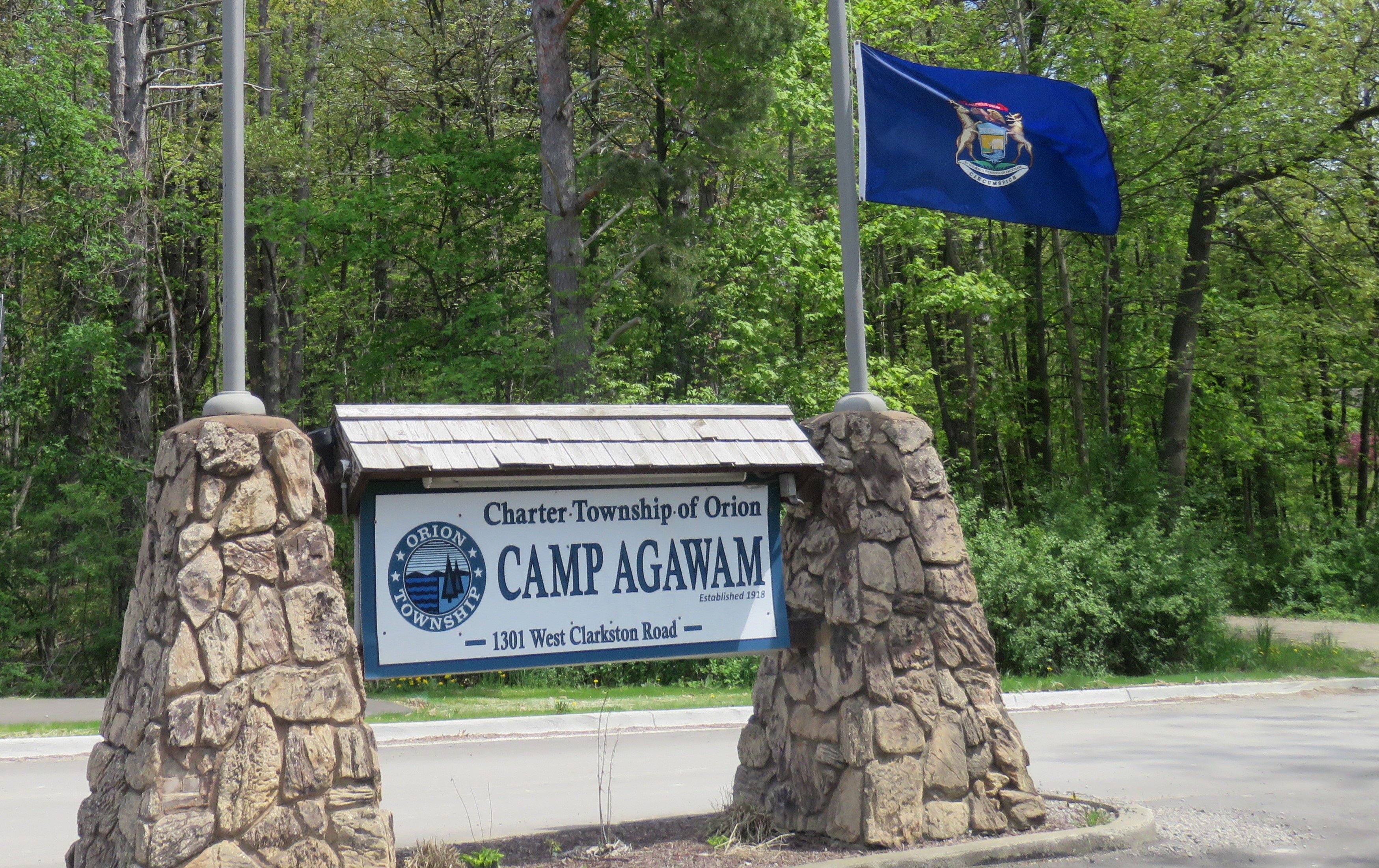 Camp Agawam, located in the heart of Orion Township is one of the newest kids on the “nature block” when it comes to easily accessible multi-use parks enriched with heavy doses of natural wildness and existing infrastructure. Agawam is on the south side of Clarkston Road between Joslyn Road and M-24 and was previously owned and operated by the Boy Scouts of America. In 2014, Orion Township took ownership and it’s now managed by Orion Township Parks and Recreation. Upgrades and improvements are underway and this very attractive park won’t be a secret much longer. 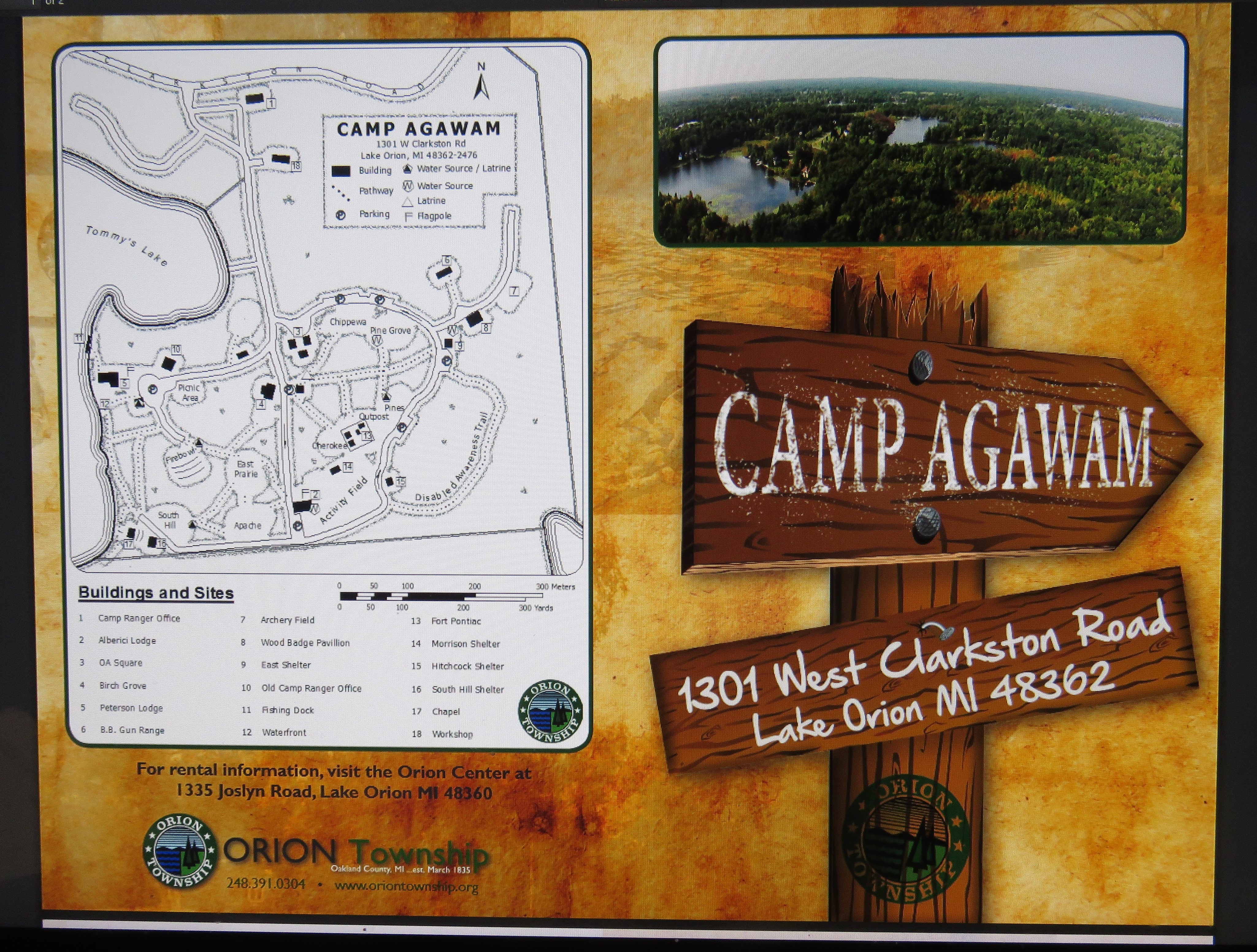 Their website states, “Camp Agawam offers a wide variety of opportunities for all ages. With roughly 140 acres, numerous campsites, rental facilities, walking trails, a chapel, and beautiful Tommy’s Lake, this is truly a picturesque park in the middle of suburban life.” Lured in by a catchy slogan on their brochure, “Come Get Lost in Nature at Camp Agawam,” I decided it was time to explore Camp Agawam. I did not get lost, but making a few wrong turns after entering the property led me to a new discovery. I encountered two young boys proudly defending Fort Pontiac, one of the park’s many rentable tenting sites, this one near the edge of the athletic field. I chatted with defenders Duncan and Jameson and with a bit of encouragement from their dad, they explained they would be there all night at the fort with the rest of their church group. I could describe them in one word: Happy! After the weekend ended Tyler, their dad, wrote me and said, “My kids had a blast playing games and making believe in the shacks throughout the fort. Definitely an experience we will remember for years to come.” 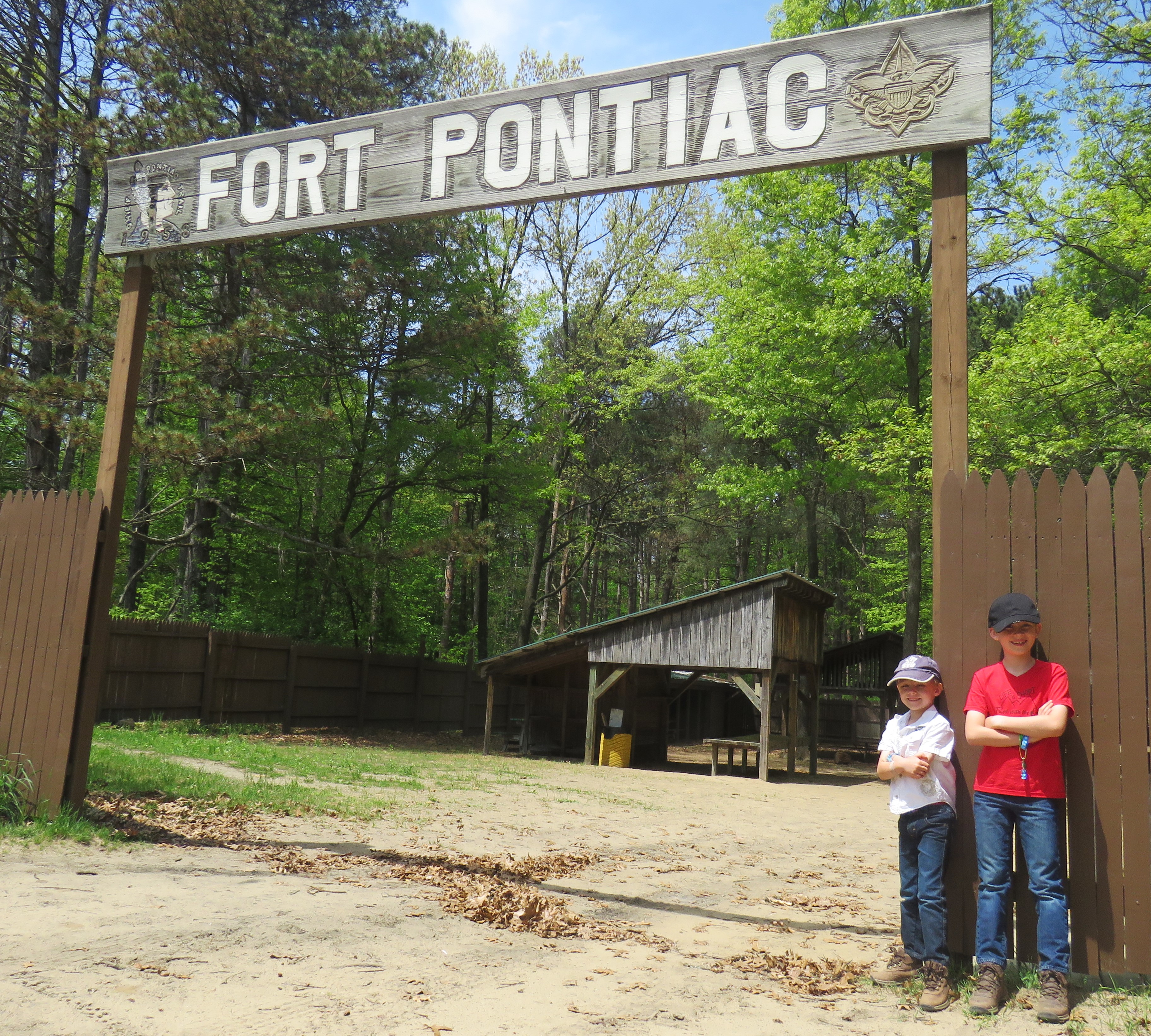 I noticed an old gate near the south end of the athletic field and a few minutes of “boots on the ground exploration” confirmed my suspicion that the northern tip of the Bald Mountain State Recreation Area saddles up against Camp Agawam – a reminder that in the world of nature all things are connected. From there it was on to the Hitchcock Shelter where I stumbled upon the Disabled Awareness Trail. The trail was easy to follow and led to the East Shelter, just a short distance away. Another hiker joined me and we bushwhacked a bit and quickly found ourselves on a meandering and rather enticing trail that went through much of the wilder northeast section of Camp Agawam. It was then that I realized that the one thing parks and recreation will not be able to improve on as development moves ahead are the subtle signs, songs, scents, and cycles of nature’s way that flourish in some sections of the camp. This is especially true on that meandering foot path that embraces wetlands, woodlands, and follows the gentle slopes and curvature of the landscape left by the last retreating glacier over 10,000 years ago. A local resident I encountered along the path showed me a morel mushroom she found, but all she would say as to the location of her prize is that it was growing under a picnic table. There were lots of picnic tables and shelters at Agawam and I was not going to crawl under every picnic table.

I hiked on with the musical accompaniment of warbler and vireo songs and the unmistakable call of a Pileated Woodpecker. The curves on the path added to the adventure, and I wondered what would be around the next bend. More towering pines, a hollow oak tree that might shelter screech owls, or more emerging wild geraniums and jack-in-the pulpits? The multi-use nature of the trail became more evident when I noticed disc golf baskets in one section near a new foot bridge over a tiny creek. Although I’ve never engaged in disc golf, the setting is spectacular and I suspect a challenging course. Trees, shrubs, terrain, and elevation changes in and around the wooded “fairways” would provide exciting obstacles.

I took a slight diversion off trail to follow the creek that led to a beautiful wooded wetland nestled between two hills. Sunlight filtered between the trees illuminating the wings of an eastern swallowtail butterfly that flew above mossy logs. Those logs looked like the perfect way to cross over to the other side; though, I half expected to end up with a high drama photo of myself face down in the swamp amidst hidden frogs, assorted water beetles, massive skunk cabbage leaves, and ostrich ferns. My crossing over and back was successful, without drama and the only surprise was the sudden trilling of a hidden gray treefrog. I’d like to think it was congratulatory song for me, but I suspect it was stirred to song by the rising humidity that precedes rain. 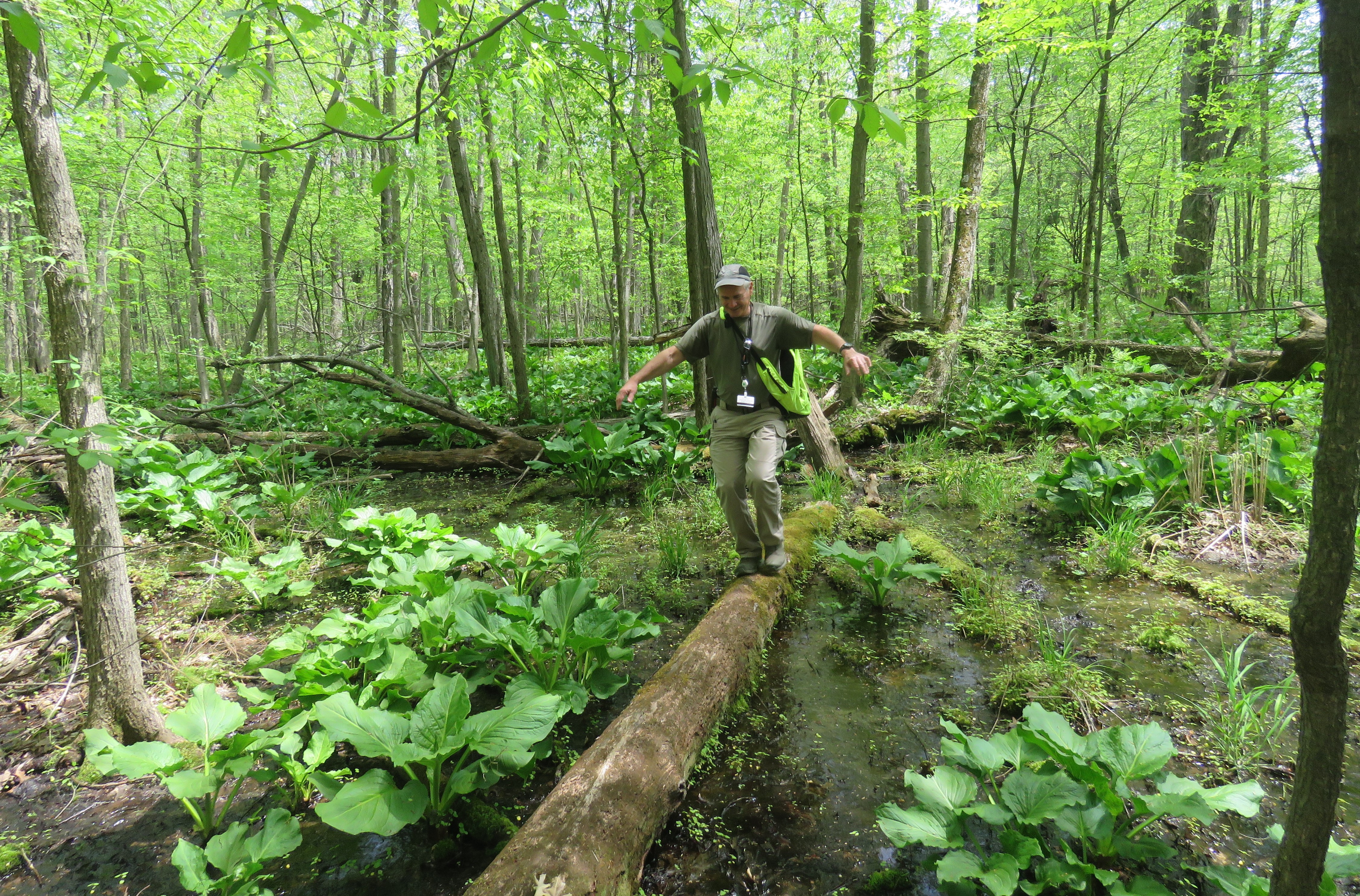 My nature-embracing trek continued and meandered between vernal ponds and another smaller wetland on the south side of Clarkston Road. From that vantage point I could see cars traveling on Clarkston Road, so I headed to the road for a closer look and talked with folks on the boardwalk on the far side of the road. I learned that recent expansions of Orion Township’s pathway system allow users to access Camp Agawam on foot or bicycle from downtown Lake Orion and neighborhoods fronting M-24. Upcoming pathway extensions will also allow easy access from Camp Agawam directly to the Polly Ann and Paint Creek Trails. A convenient pedestrian crosswalk, which I used after activating the button that warns traffic of my intent to cross, is already in place near the southern tip of Elkhorn Lake. The crosswalk connects the Clarkston Road pathway (funded with DNR grant monies) on the north side of Clarkston Road to the entrance of Camp Agawam on the south side. These progressive actions are sure to increase the ease of having a great day of exploring, even without a car, on this beautiful property with a bright future on the wilder side of Oakland County.

After another 15 minutes of hiking, this time along the camp roads, I returned to where I had started my trek near Peterson Lodge on the east shore of Tommy’s Lake. There’s a small beach there with a picnic table too: the perfect place for my late afternoon lunch. Thinking back to the hiker that found a morel, I looked under the table, but did not find any morels. 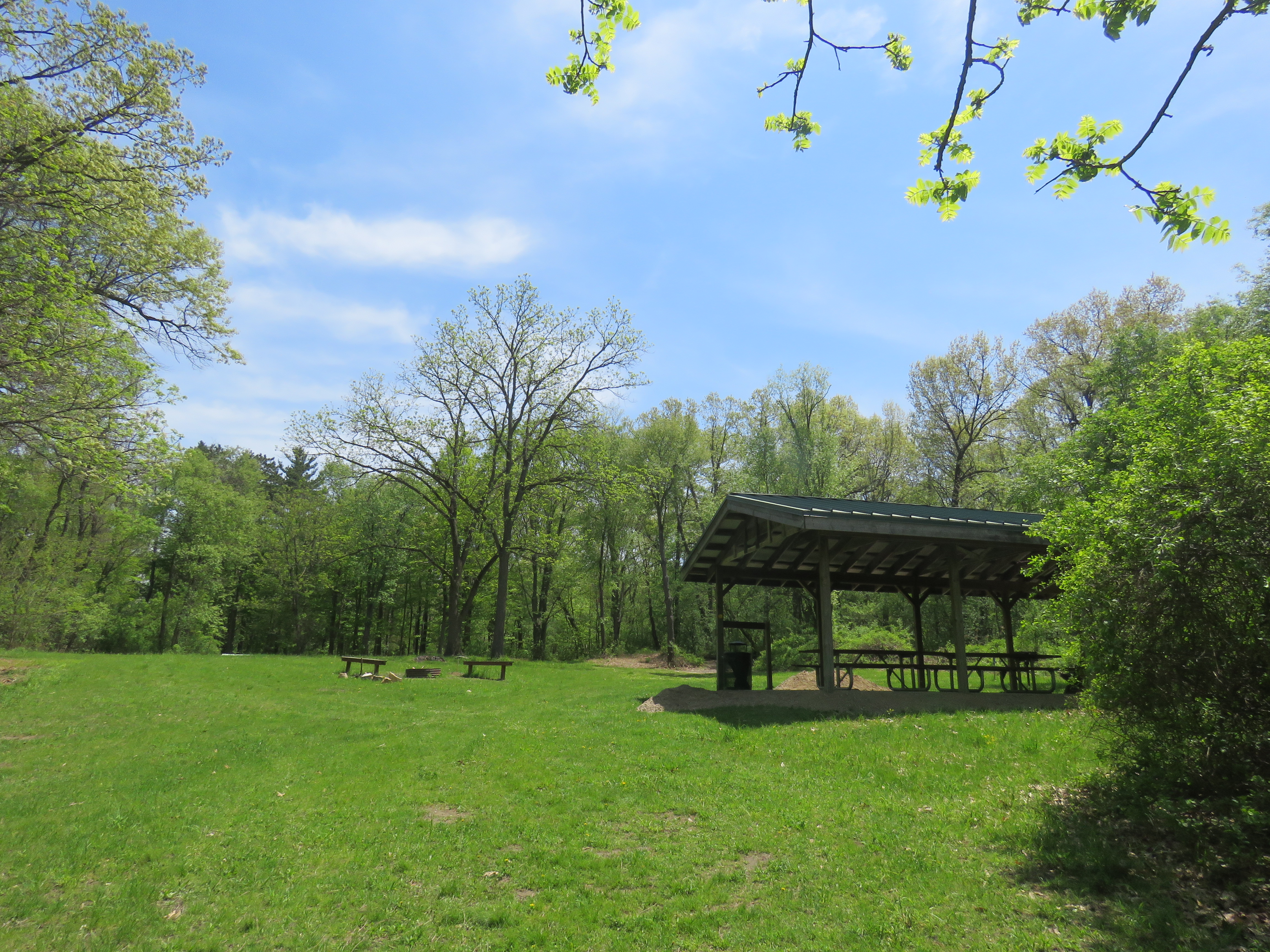 This gem, hidden away in the midst of suburban life, would be a great place for families to explore the “tamed,” yet still on the “Wilder Side” of Oakland County. Detailed information on Camp Agawam facilities, including a map of buildings and sites, rental fees, rules and restrictions can be found on the Orion Township Parks and Recreation website. 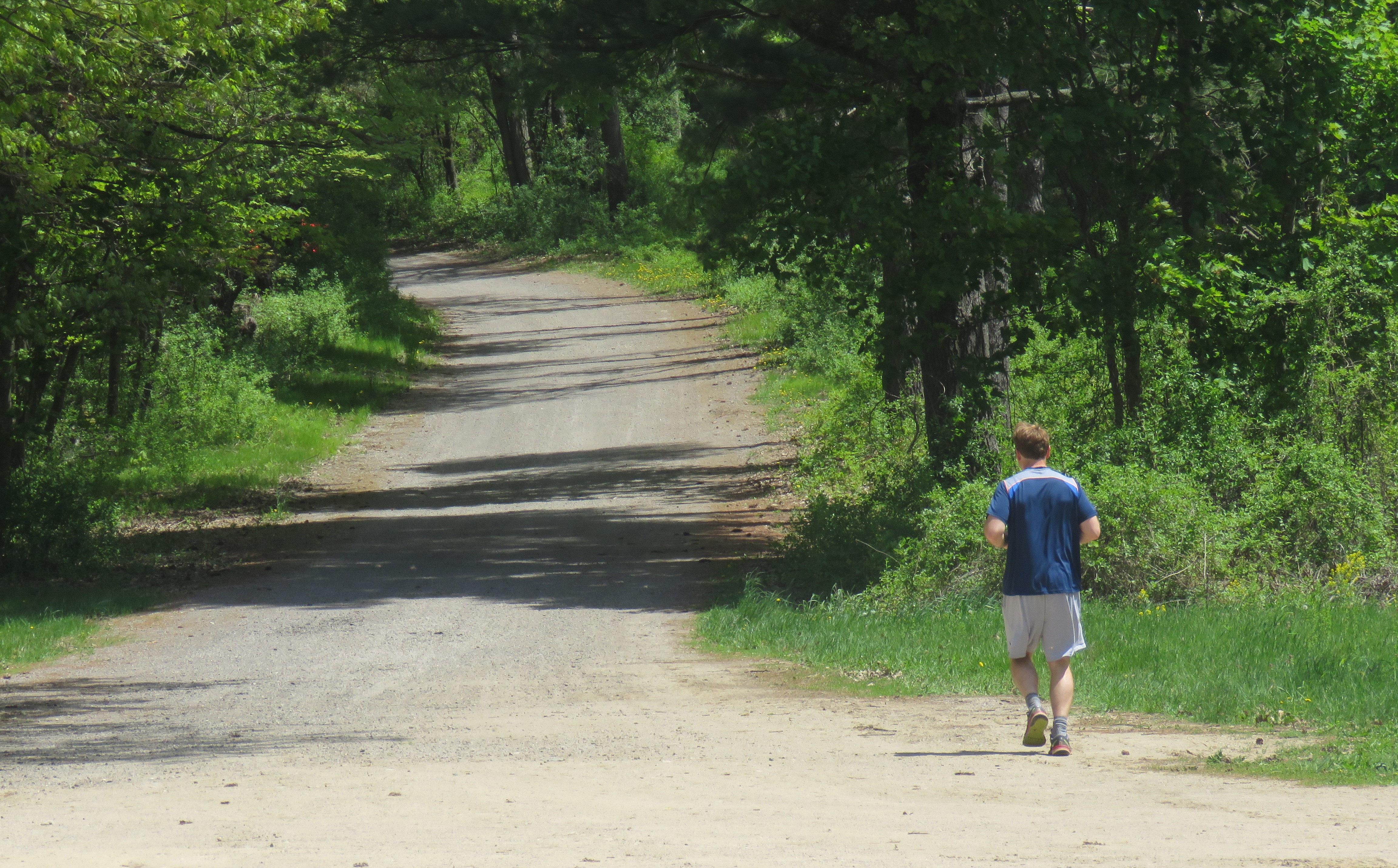 2 thoughts on “Getting Lost in Nature at Camp Agawam”