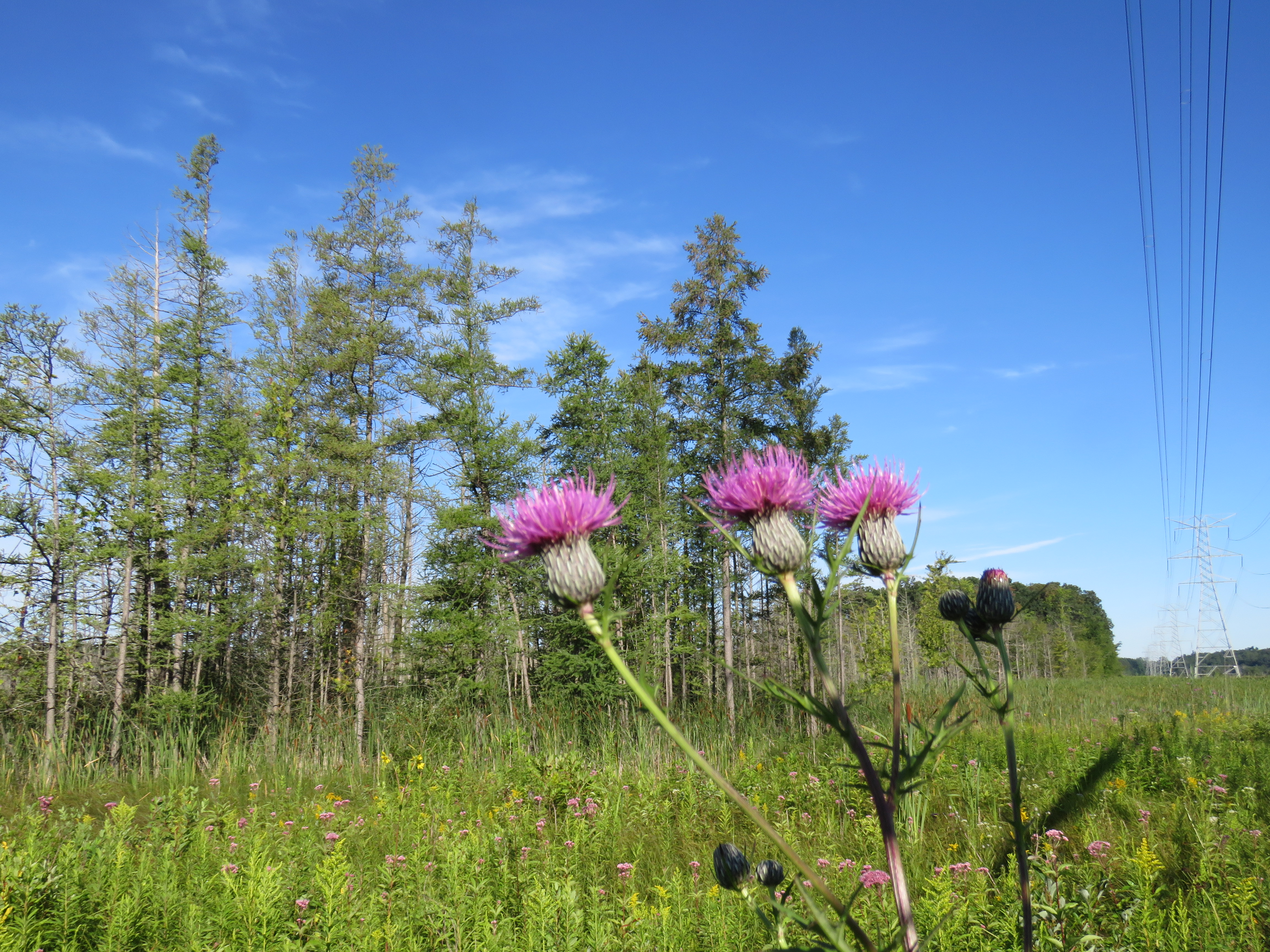 My early morning hike of solitude on a sultry summer day at Independence Oaks County Park – North was a near magical experience. Wispy cirrus clouds added definition to the clear blue sky. Spider webs sparkled with diamonds of dew. Sandhill cranes trumpeted from a wet meadow. An American Goldfinch and an Eastern Kingbird perched in treetops to bask in sunlight, as did a Red-tailed Hawk high up on a transmission line tower. The music of crickets and the rustle of aspen leaves in the morning’s gentle breeze softened the rumble of traffic on nearby Sashabaw Road. That all happened in the first ten minutes last Sunday morning. The next ten minutes were well-spent grazing on juicy blackberries, suffering some significant scratches in the process. A sudden faint buzzing sound near the base of the shrubs made me wonder if there was a hidden cicada down low. Or perhaps, just perhaps, an Eastern Massasauga Rattlesnake thought I was too close. The blackberry thicket would be a good place for a rattler to ambush a mouse. So I hiked on, that mystery unsolved.

Here’s what I wrote for the Oakland Press at the time: “The story of this parkland with a spring-fed lake started with a cataclysmic event. A mile-high slab of ice crushed and scraped its way south into Michigan. Boulders ripped from the Canadian Shield were carried to Oakland County. Forces sculpted the land and formed hills and ridge lines. When the great glacier melted, a block of ice, one of many, broke free from the main ice sheet and settled onto the raw and soft earth on the southern side of the Brandon Township/Independence Township line just west of Sashabaw Road. That depression became what geologists call a kettle lake. Today, that lake, which most likely once held the reflections of grazing mastodons, has a name: Upper Bushman Lake.”

The natural features that formed around that pristine lake over the past 10,000 years, including hardwood conifer swamps and wet-mesic prairie, helped the site be classified by the Michigan Natural Features Inventory as a Priority One Conservation Area. Bushman Lake is something of a focal point for nature lovers who take the time to explore this northern parcel of county land. So that’s what I did before hiking back into the woods.

It’s a beautiful spring-fed lake, part of the headwaters of the Clinton River and it holds a “Catch and Release Special Designation” from the Michigan Department of Natural Resources: the only public water in southeast Michigan so classified. The lake is about 32-acres and is actually comprised of three small interconnected lakes. During early bushwhacking visits, I noticed an osprey, a majestic raptor sometimes known as a fish-hawk, hovering over the lake. On Sunday I watched one fly over the northern-most section as it crossed from Independence Township to Brandon Township. The thick shoreline vegetation that surrounds the lake makes shoreline fishing essentially impossible for humans, but a desirable habitat for wildlife. 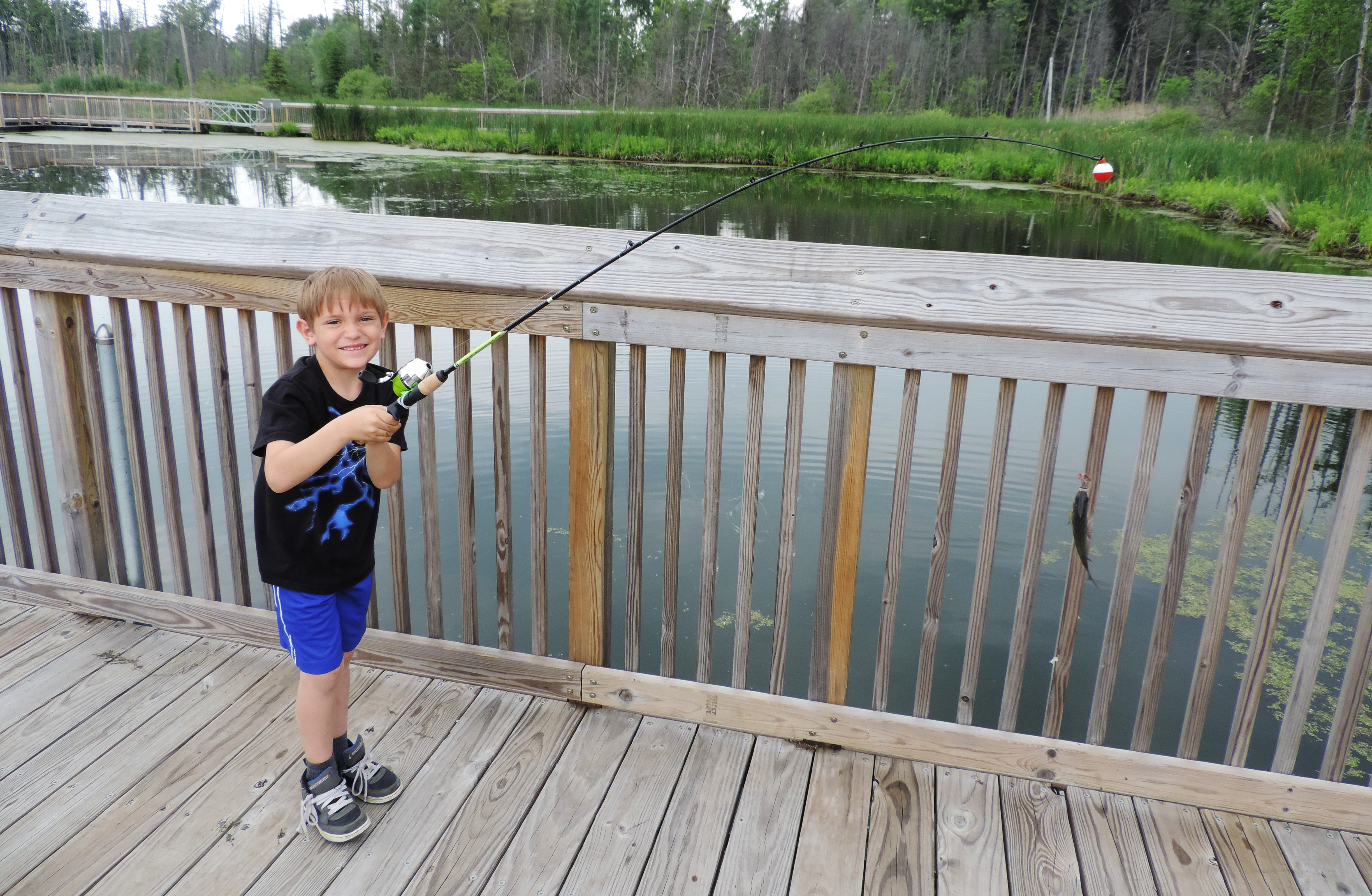 Fishing is one attraction at Independence Oaks – North. Park visitors may hand-carry their kayak or other non-motorized craft down a 1,200-foot-long gravel trail leading from the parking lot to the northeast corner of the lake. Fishers also must have an Oakland County Parks vehicle permit for parking and of course a MDNR fishing license on their person. Most anglers don’t use boats and instead fish from the 180-foot-long fishing dock that is easily accessed by following the gravel trail to a gently curving 312-foot boardwalk that connects to the pier. Bluegill, Northern Pike, Largemouth Bass, Crappie, and Pumpkin Seed Sunfish are the species most often caught. The lakeshore and dock area is also a popular area for mink and northern water snakes to hunt frogs and fish. Muddy tracks on the boardwalk hinted that perhaps a coyote had used the curved boardwalk as a hunting platform for small creatures. As I wandered away from the lake I noticed a statuesque Great Blue Heron near lily pads that served as platforms for a few very large snails.

A first-timer should not wander off-trail. Although the site is relatively small it would be easy to walk into “boot-sucking” wet meadows or brush up against swamp-loving poison sumac that’s already formed its clusters of small yellowish-white berries. As mentioned earlier, the Eastern Massasauga Rattlesnake, a fully protected Threatened Species, is at home in this wildland gem. There are signs posted advising hikers of their presence. Here’s what you may not know: On cool sunny days in the waning days of summer, rattlesnakes occasionally sun on trails. They are a shy and reclusive species and would not strike unless provoked. On a trail they are relatively easy to spot. In tall grasses and shrubs they are hidden. In all my years of wandering in parks and wildlands of Oakland County I have only been fortunate enough to have seen a massasauga twice: once at Indian Springs Metropark and then two years ago at Independence Oaks. That Independence Oaks beauty posed in perfect sunlight that clearly showed the tail’s rattle, and the elliptical cat-like eyes, a characteristic of all native venomous snakes in the United States except for the coral snake, a species not found in Michigan.

It’s hard to meander more than a few dozen feet without encountering late summer wildflowers. Some of the most noticeable tall meadow and marsh species include Joe-Pye Weed, Boneset, Purple Coneflower, Yellow Coneflower, and Queen Anne’s Lace. Butterflies, bumblebees, Ruby-throated Hummingbirds, and the amazing Hummingbird Moth, a moth that mimics the hummingbird in behavior and appearance, visit these wildflowers. This makes it easy for a patient photographer to capture quality images.

The park also has a small apiary. If wandering near the clearly marked beehives, give them a wide berth and you will be ignored. The woodland beyond the beehives is one of my favorite areas to sit and lean against a cedar tree on a small bluff, look out at the almost-hidden lake, and just appreciate the waning days of summer, its sounds, and scents. A pair of bucks watched me from a ridgetop, and one came in for a closer view. My five-minute walk back to the small parking lot revealed hints of summer’s end, including the empty exoskeletons of cicadas and the first tinges of red on the leaves of staghorn sumac. I stopped to talk with two first-time visiting young women who came to Independence Oaks – North to bicycle, not knowing its trails were very short. I was happy to share with them the news that a connector trail to the main park is under construction and may be completed later this year. They were happy with that news too, and with what they saw in the park in these middle days of August. 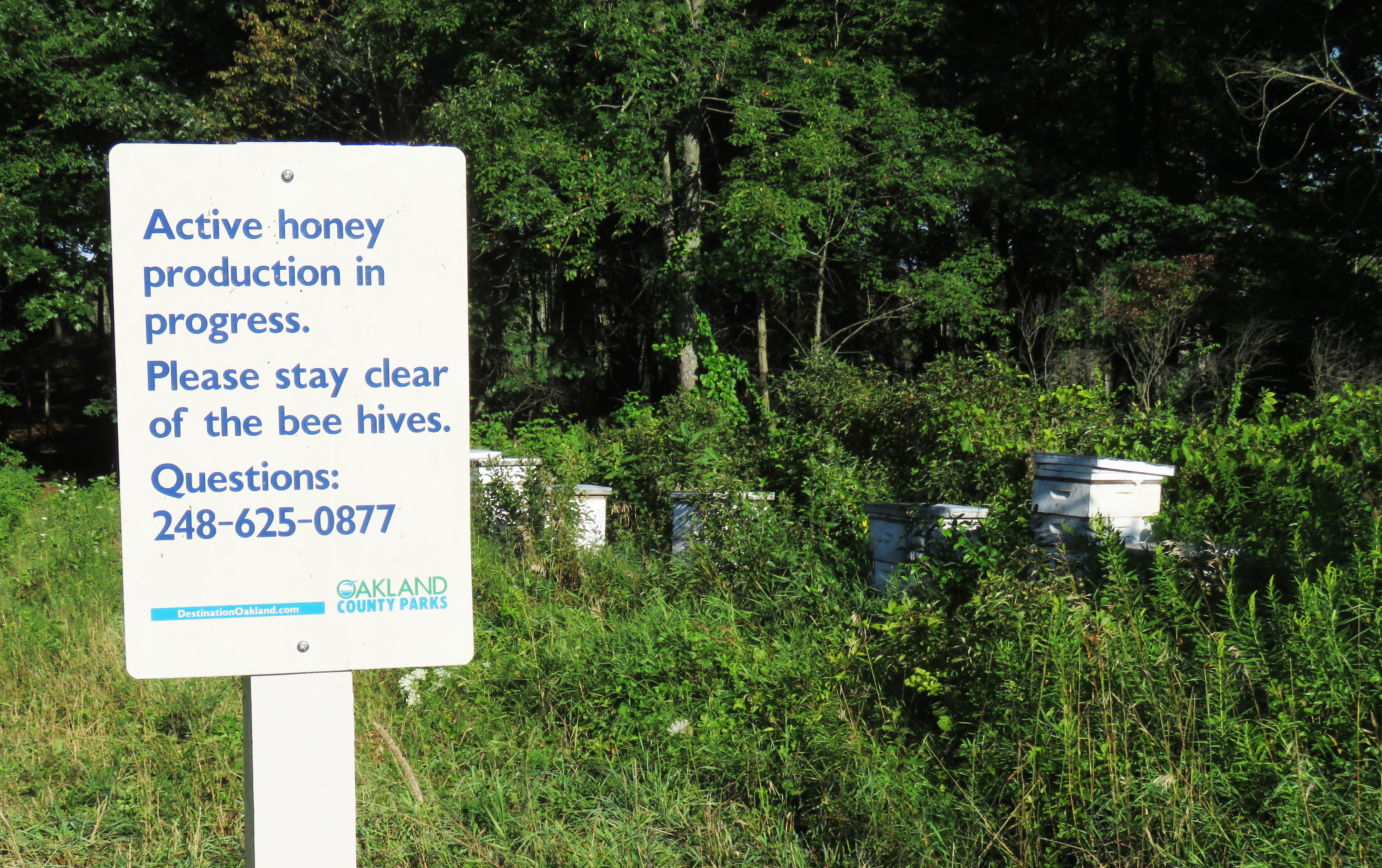 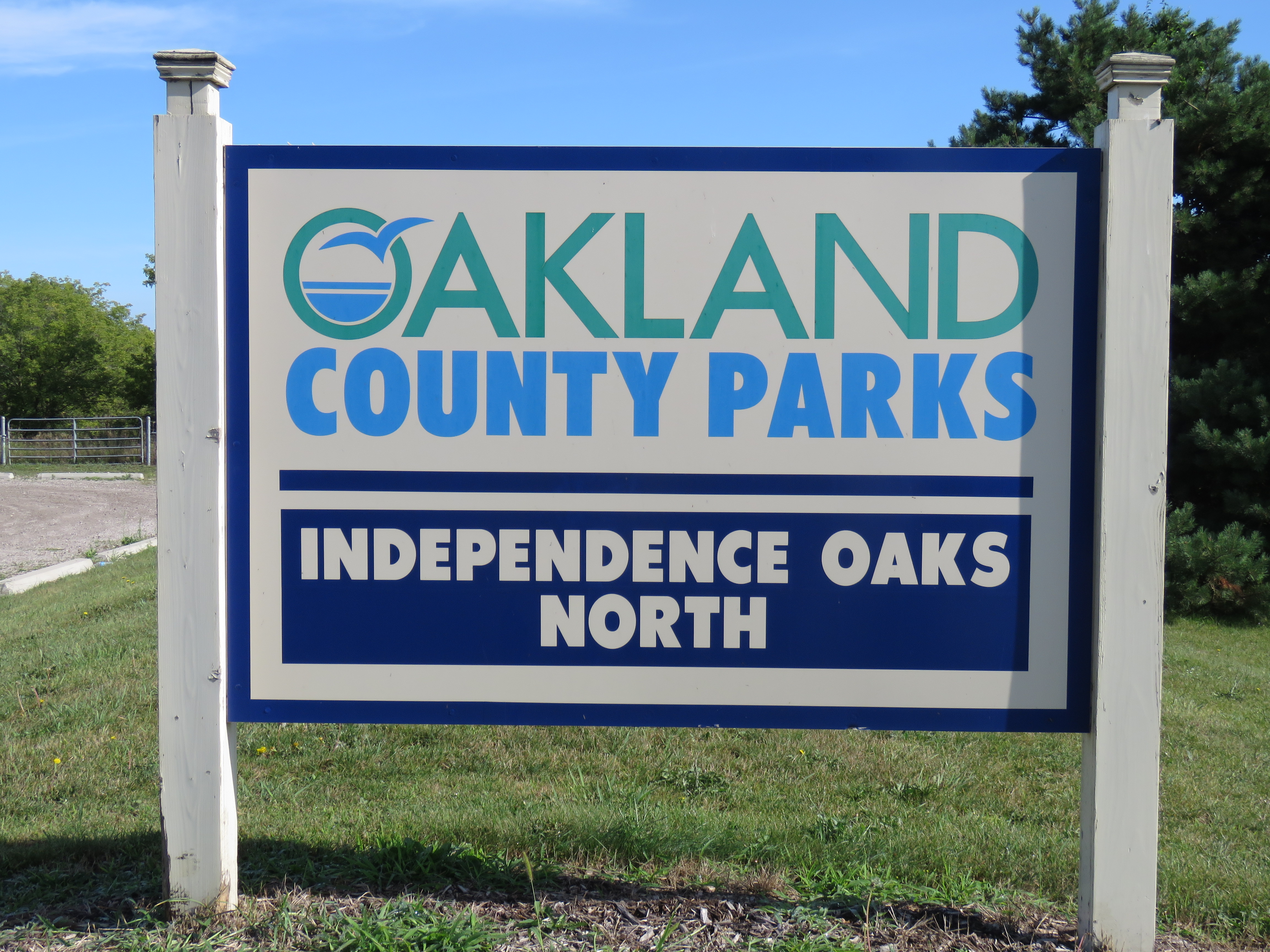 For detailed information on Independence Oaks County Park and all parks managed by Oakland County Parks and Recreation, visit their website.