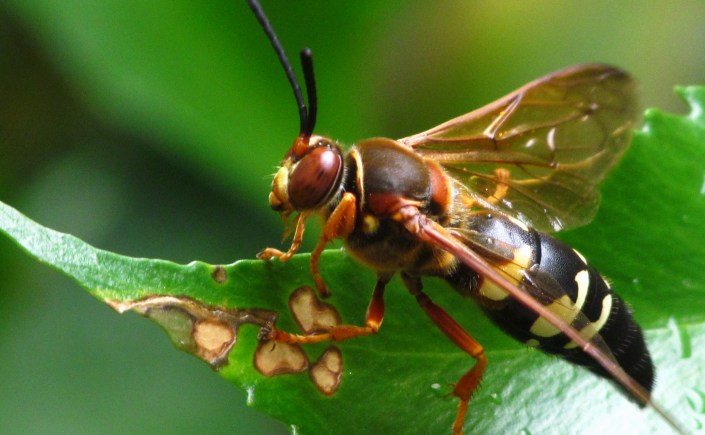 Cicada killers (Sphecius speciosus) are a little known, but rather frightening looking member of the wasp family that are very much at home in Oakland County. Just the fact that the word “killer” is part of their name draws attention and causes unnecessary anxiety and fear.

Cicada killers display the kind of digging and soil movement skills that would make any construction engineer proud. This excellent video of a cicada killer digging a tunnel next to the foundation of a pavilion at Bloomer Park in Rochester Hills was captured last week. The detail in the video inspired me to write more about these tunnel digging creatures that have a surprisingly mild disposition.

A bit of research revealed this information on their tunnel digging process:

“Females do the digging, preferring sandy or loose soils for her ½ inch wide tunnels. The entire egg-laying complex created by an individual cicada killer wasp is usually no more than 15 inches below the surface, but tunnels may reach up to 70 inches in length. Each tunnel can have up to 15 egg chambers that the female must stock with cicadas for her offspring to feed upon when they hatch.”

Should we worry about the presence of cicada killers? Absolutely not! They are very much a part of nature’s way and they want nothing to do with humans and ignore our presence. They hunt cicadas. Ohio State University Extension Service explains:

“As indicated by their name, these wasps hunt annual cicadas. Cicada killers rarely sting humans unless someone tries to handle one. However, homeowners may become alarmed because of their exceptionally large size and activity around nesting sites. Males have especially aggressive territorial behavior, but they are incapable of stinging. Females may sting when handled roughly, but typically, they are mild-mannered and will fly away when disturbed.”

When a cicada killer captures a cicada it will then fly with or drag the cicada, which might weigh more than the cicada killer, back to its ground nest. Their grub-like larva then start to consume the captured cicada while it is still alive. Purdue University Department of Entomology describes the graphic process in great detail this way:

“After digging the tunnel, the female wasp locates a cicada   in a tree or bush and then inflicts a very precise, paralyzing sting before dragging it to the entrance of its burrow. The cicada is not dead but merely immobilized – sometimes continuing its incessant buzzing even while being dragged to the hole. The cicada killer wasp is amazing, not only for being able to detect and paralyze its prey, but also because of its ability to fly carrying a cicada that is proportionally equal to or heavier than the wasp itself. This is an amazing aeronautical feat. Equally interesting is the reproductive behavior of the Cicada killer. After stuffing the cicada into a small nursery cell, the wasp lays an egg, then seals off the chamber. The egg hatches in 2-3 days, then the larva burrows into the cicada carcass and begins the slow process of devouring the immobilized, but still-living cicada from the inside out.”

Looking for cicadas or cicada killers? Now is the time! Cicada killers appear in southeast Michigan in their greatest numbers between the end of July and well into August, timing their appearance to the emergence of cicadas. Once you start hearing the shrill mating calls of the cicadas, which is usually on a hot summer day in early August, it’s time to look for their “arch-enemy” the cicada killer. Unless one is very observant, and perhaps lucky, it is almost an impossible task.

It’s often difficult as well to spot a cicada on a tree, but their loud buzzing sound is unmistakable. Some naturalists, myself included, refer to their seasonal song as one of summer’s most noticeable soundtracks. The males create the sound by vibrating their tymbals—a membrane in their abdomens. Female cicadas are smitten and consider it their mating invitation.

After mating, the males die and females begin to lay their eggs, which they insert into tiny holes in tree branches with their ovipositors. After they hatch, between six to ten weeks later, the nymphs fall to the earth and burrow underground and suck sap from tree roots. Depending on the species of cicada, they could stay underground from two to 17 years.

Perhaps your home is an excellent location for cicadas and cicada killers. Cicadas prefer well-drained, open patches of dry soil that are in full sunlight. Their nesting grounds are usually near mature trees that provide habitat for cicadas. Learn more about life cycles of the various kinds of cicadas here. As summer progresses, I will be listening for cicadas and watching for the elusive cicada killers in my corner of the wilder side of Oakland County.

One thought on “Cicada Killer Emergence”