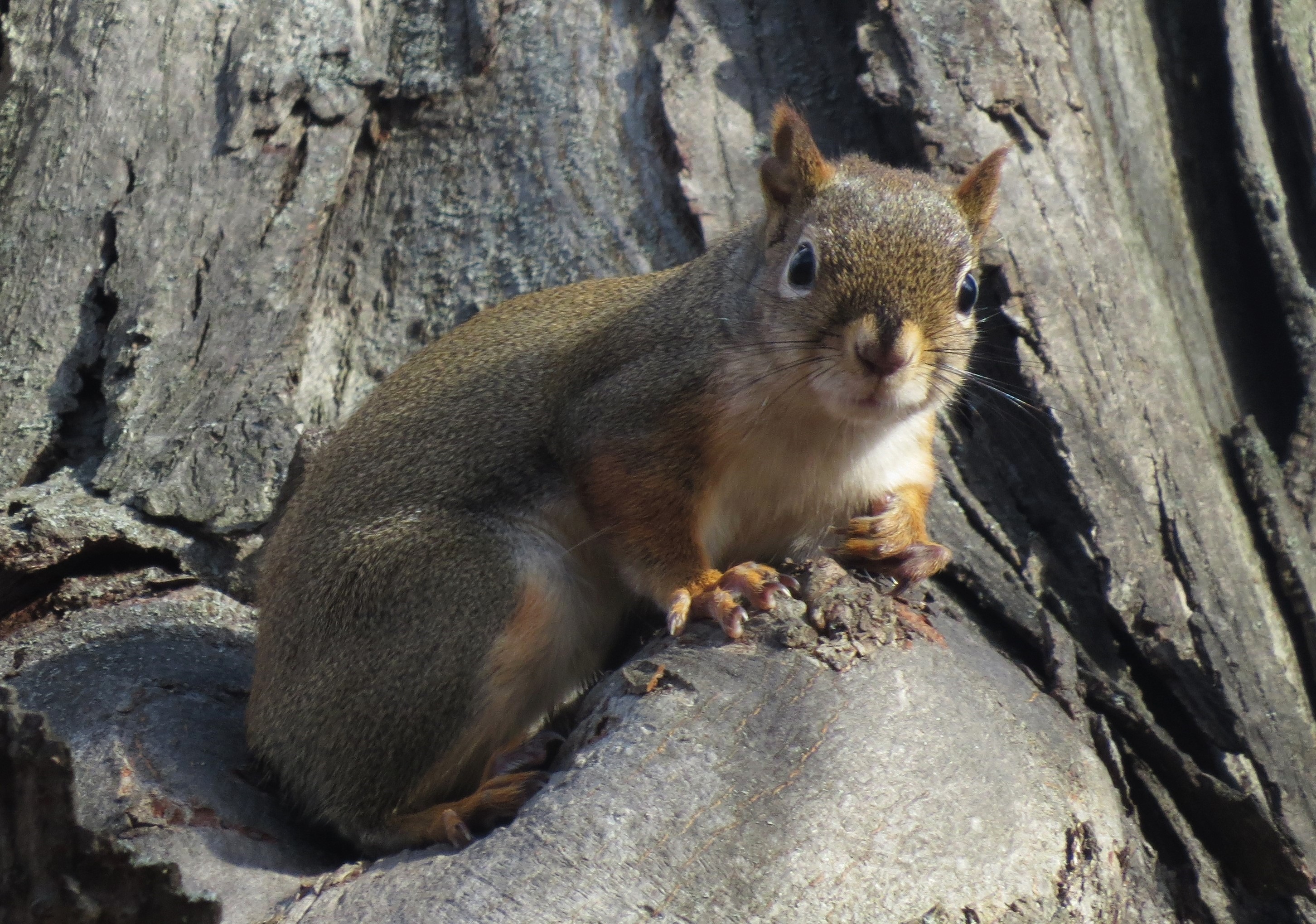 Pumpkins were laced with frost last Saturday morning and that sudden temperature plunge sent motorists scrambling for window scrapers as squirrels went into overdrive nut gathering mode. Hours of daylight are diminishing and leaves are cascading downwards with each gust of wind. Although some humans head south for the entire winter, most of us simply adapt to the cold with heavier coats, warm houses, vacation dreams and weather-adjusted outdoor plans. But what about the wildlife in our midst as temperatures continue to fall and food gets harder to find? They have three choices: migrate, stay active, or hibernate. 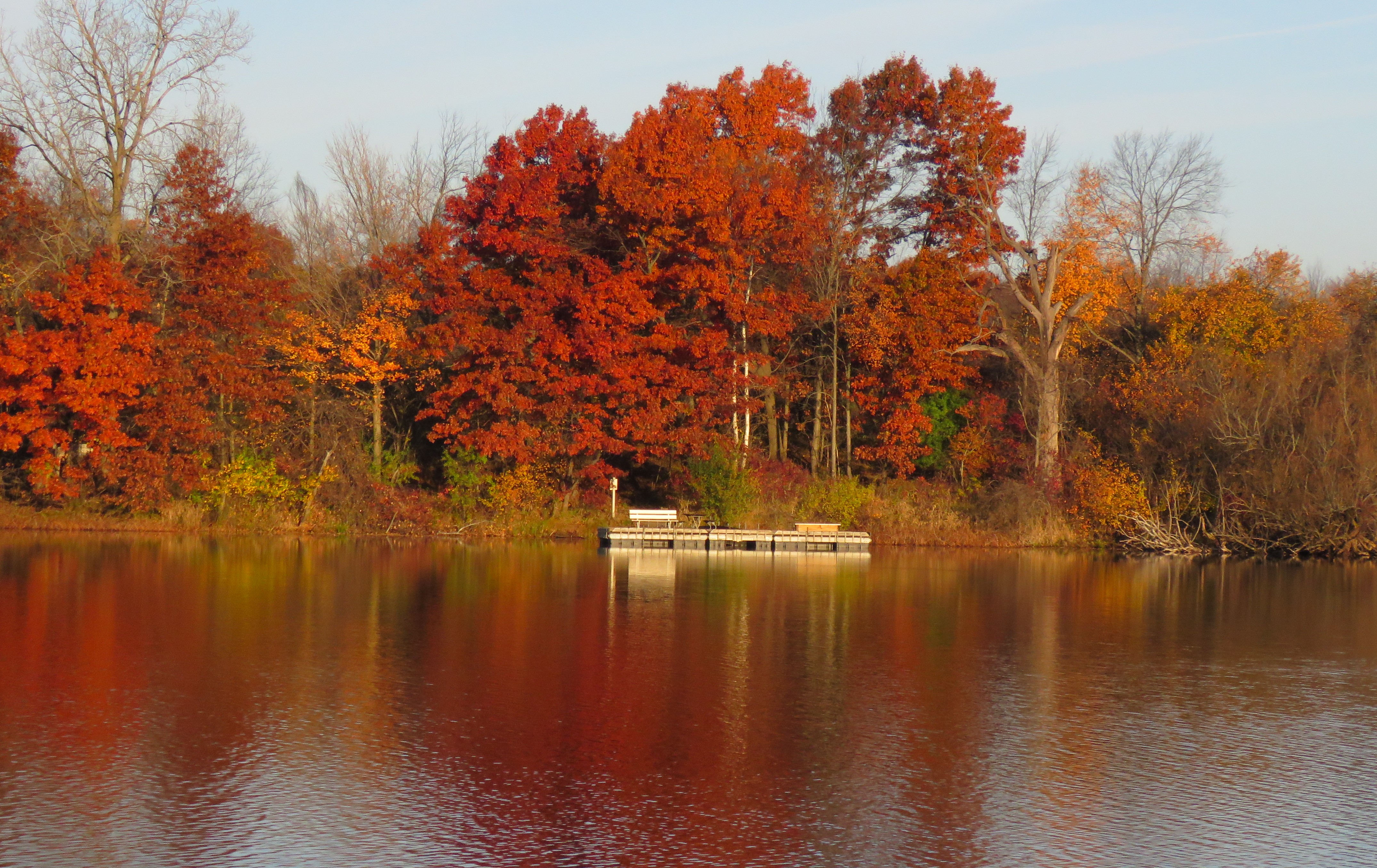 Contrary to myth, it is not the cooler temperatures alone that stir wildlife into migration. Biologists believe it’s a combination of factors, including decreasing hours of daylight and decreasing food supplies that trigger the urge for birds to migrate. Most of our Ruby-throated Hummingbirds, Sandhill Cranes, Turkey Vultures, Osprey, vireos and warblers left our county weeks ago. They had to. Hummingbirds can’t find nectar after the last of the flowers wilt. Osprey are exclusively fish eaters and lakes that freeze over deprive them of a food source. Warblers and vireos feast chiefly on insects and flying insects and caterpillars can’t be found in winter. Turkey Vultures depend on decaying, not frozen, creatures and the days of roadside abundance will soon vanish. Sandhill Cranes feed on a diet that includes berries, tubers, seeds, frogs and even mice, food types that will be difficult to find after snow covers the land.

There are always exceptions to the “rules” of who migrates and who stays behind, and if a bird disagrees with what a bird book states, always believe the bird. Robins are heralded as the first bird of spring, yet hundreds, perhaps thousands, stay in our county all winter. They hunker down in thickets and swales and switch their diet from mostly worms to dried berries and fruits and fluff up their feathers as a blanket against cold winds. Henry David Thoreau wrote, “The bluebird comes and with his warble drills the ice and sets free the rivers and ponds and frozen grounds.” Times have changed and it is not at all uncommon to see Eastern Bluebirds at a suet feeder in the middle of winter or scrounging for spilled seeds on top of snow under a feeder. Adapting for survival is the name of the game when it comes to migration, or breaking the rules that we think they should follow.

For those species that do not migrate, there are two choices: sleep all winter or take direct evolutionary actions to survive the rigors of winter and adapt to the conditions at hand. The creatures that adapt to changing conditions are the species we see the most in this first week of November with squirrels taking the lead in visibility. Every biking and hiking trail, city park and woodland on the wilder side of Oakland County is alive with squirrel activity as they gather this year’s nut crops, especially the abundance of black walnuts. The nuts are stored away in hollows of trees and sometimes even in attic crawl spaces after a bit of forcible entry through weak louvers.

Although chipmunks are often billed as true hibernators, in reality they store acorns, seeds and berries in underground dens and nap deeply during periods of extreme cold, but they will come topside during periods of milder weather. White-tailed deer grow a thick winter coat and their hollow hairs help insulate them from cold winds. When winter storms rage they retreat to the shelter of cedar thickets. White-footed mice plan ahead and will move into abandoned bird nests, adding leaves for protection and insulation and sometimes even cap off the nest with berries that double as an emergency food stash. Meadow voles are mouse-like creatures that stay active all winter by creating small tunnels through dried grasses under the snow and building grass-lined nests. They scurry about their under-snow expressway and life goes on, unfazed by weather extremes above. Coyotes fare well in winter by hunting rabbits and pouncing into the snow to capture meadow voles they detect by sound. Beavers are now adding mud to fortify their lodges and gathering more saplings to store in underwater caches. Once lakes freeze over, they’ll use underwater entrances to reach their food cache and stay cozy in the lodge all winter.

We all know that groundhogs are true hibernators and we wait for and celebrate the mythical day, Groundhog Day, when Punxsutawney Phil emerges to falsely forecast the weather. According to the National Wildlife Federation, 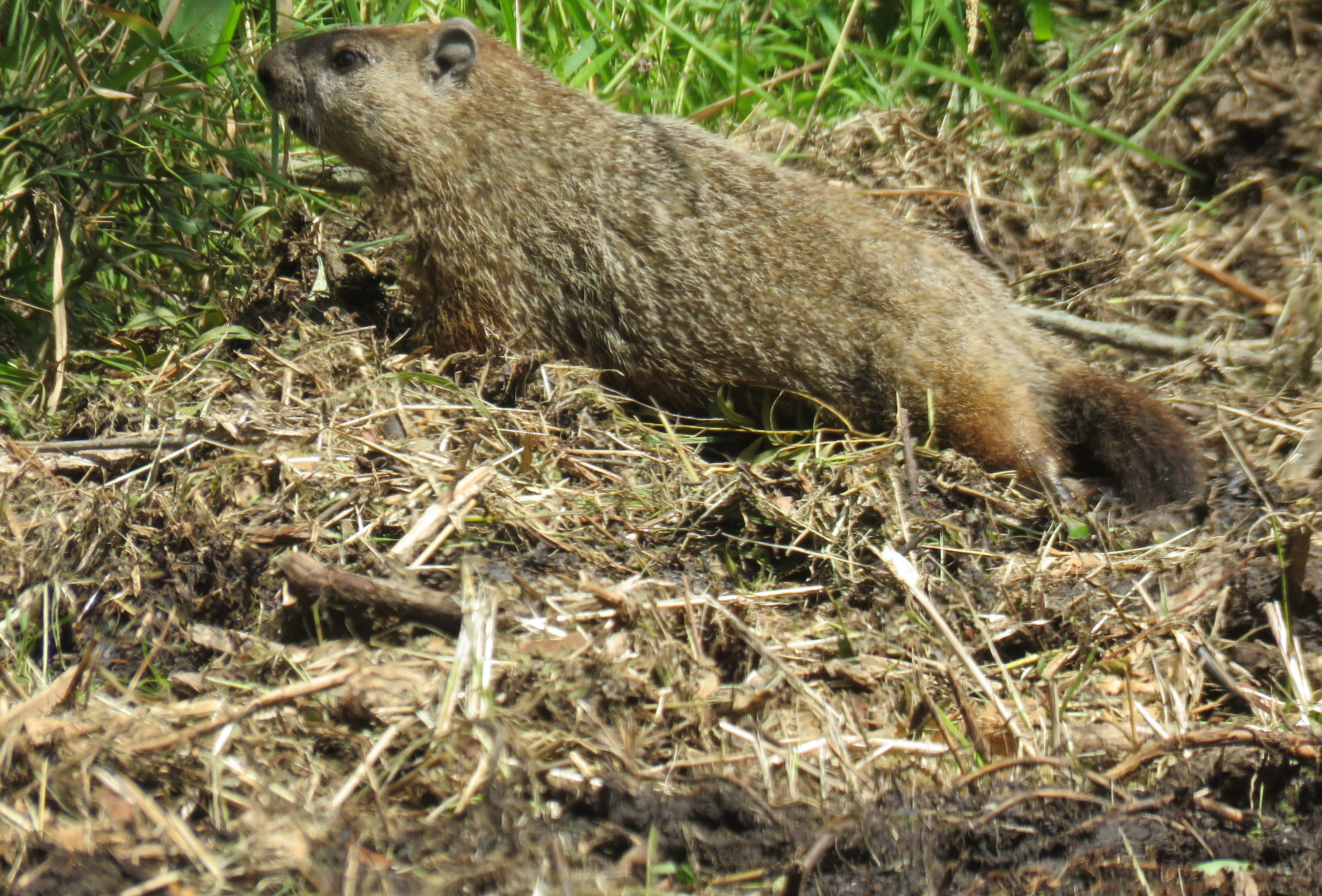 Two lesser seen species have more unusual means of hibernation. Our Eastern Massasauga Rattlesnakes hibernate, although in the world of snakes that process of overwintering dormancy is properly called brumation. Severe periods of subfreezing weather can directly kill a snake, but cold-induced sluggishness also means our rattlesnakes would be less able to hunt for and then digest prey. This makes finding a hidden and insulated overwintering den, known as a hibernacula, essential. In Oakland County, that site is often a crayfish burrow where they spend the winter down deep, semi-submerged in water below the frost line. 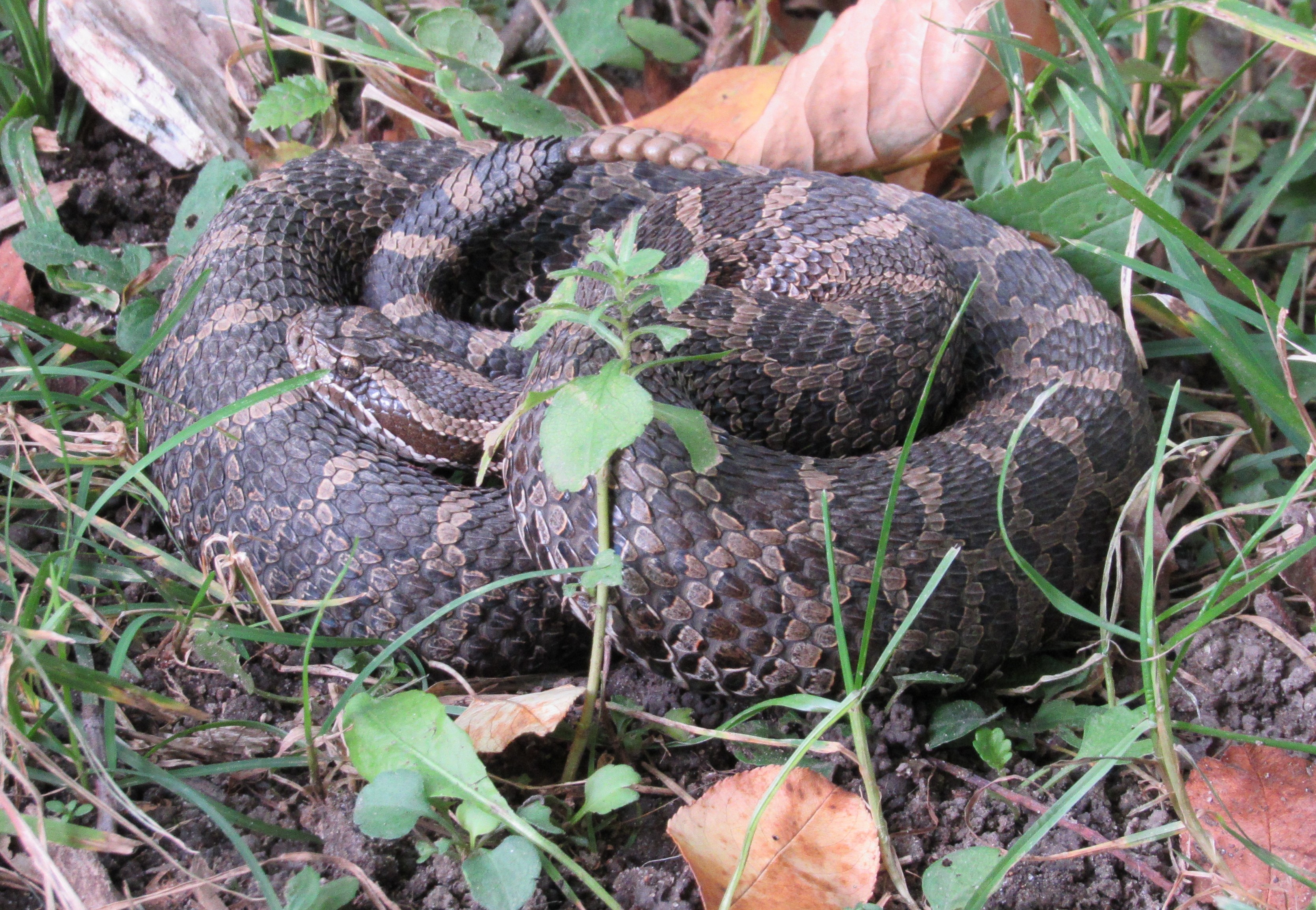 Perhaps the most fascinating local phenomenon in the world of reptiles and amphibians when it comes to hibernation is what happens to wood frogs as the mercury settles below the freezing mark. It’s remarkable enough that a wood frog can transform from a tiny tadpole in a vernal pond to a land-living frog, but in the winter they hibernate to the point that they freeze like a block of ice. As autumn races towards winter, they crawl under thick layers of leaf and forest debris and enter what could be described as a death-like condition. There is no heartbeat and no respiration, yet they are alive in a state of suspended animation that remains under study and is not fully understood by scientists. They produce a natural antifreeze to keep their body’s cells from totally freezing, but they resemble and feel like ice carved in the shape of a frog. This mysterious strategy allows wood frogs to survive without a bite of food for months on end and then as they thaw in early spring, their hearts begin to beat once more. The newly active frogs hop off to vernal ponds that may still have traces of ice and begin their duck-like quaking that lures in mates and signals to nature-loving humans that spring has returned once more.