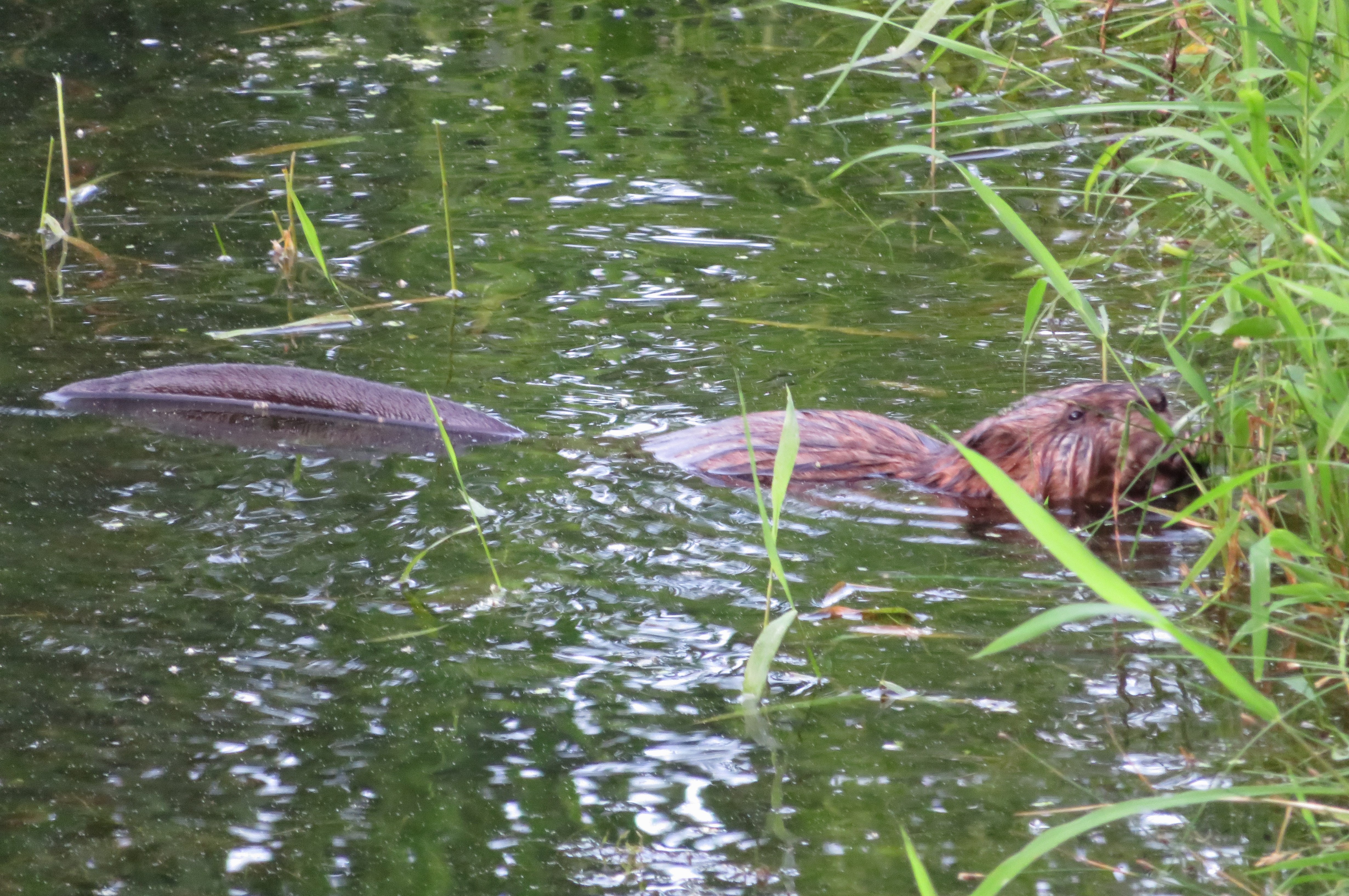 You need not go on an epic journey to discover, explore and enjoy the ways of nature in the sultry days of summer. You need not leave the county or even leave the city or suburbs. Just walk to small bodies of water with vegetated edges and the subtleties and secrets of nature’s world unfold, often just yards from pavement and manicured lawns. 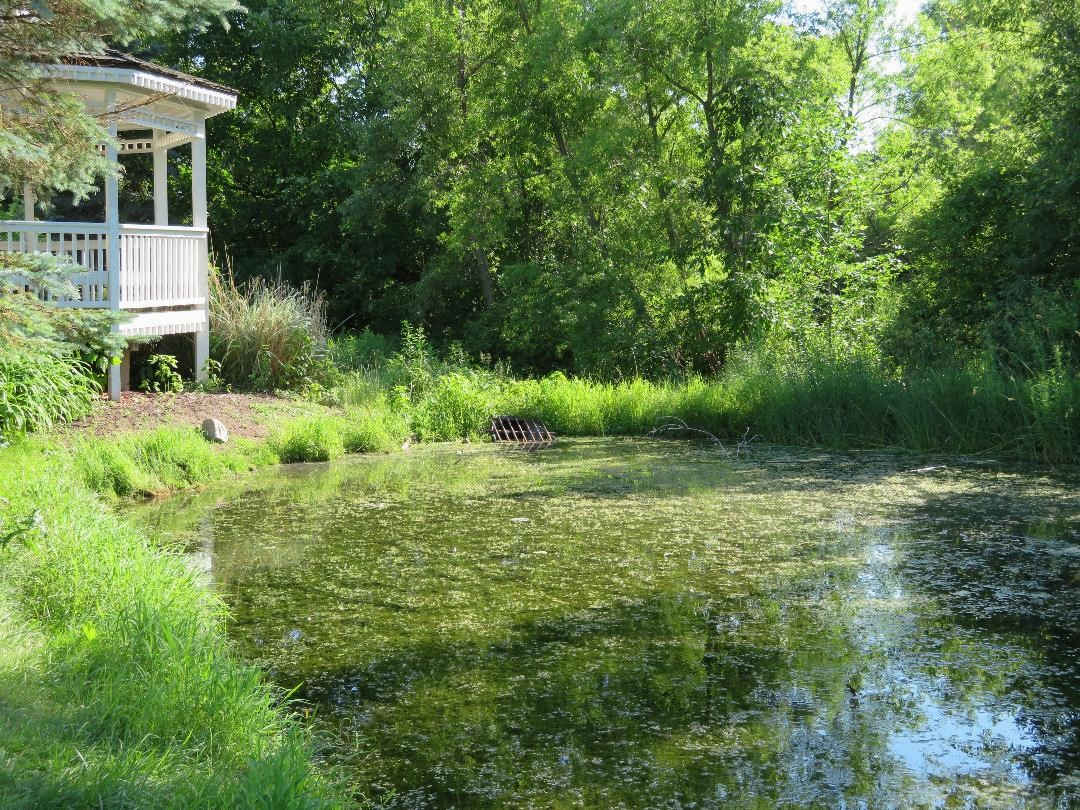 Today’s Wilder Side of Oakland County blog post sprang to life when an Orion Township resident emailed me a photo with a question: “Is this a small beaver or a muskrat?” The image was very clear and she mentioned she photographed it from a gazebo overlooking a small pond in her neighborhood. The rounded tail, partially raised in an arc above the surface of the water, clearly indicated it was a muskrat. Her note also mentioned that there were lots of turtles and frogs in the pond, and rabbits at the pond’s edge. A wide angle image that she included showed a house in the background overlooking the pond; it intrigued me enough to ask for the location of the tiny pond. She shared the location and informed me the pond is actually a “detention pond” that was constructed and designed to capture sediment from road runoff after the development was established. I thanked her for the information and concluded my note to her with these words, “Nature is where you find it,” and then as an afterthought, asked if she would show it to me. 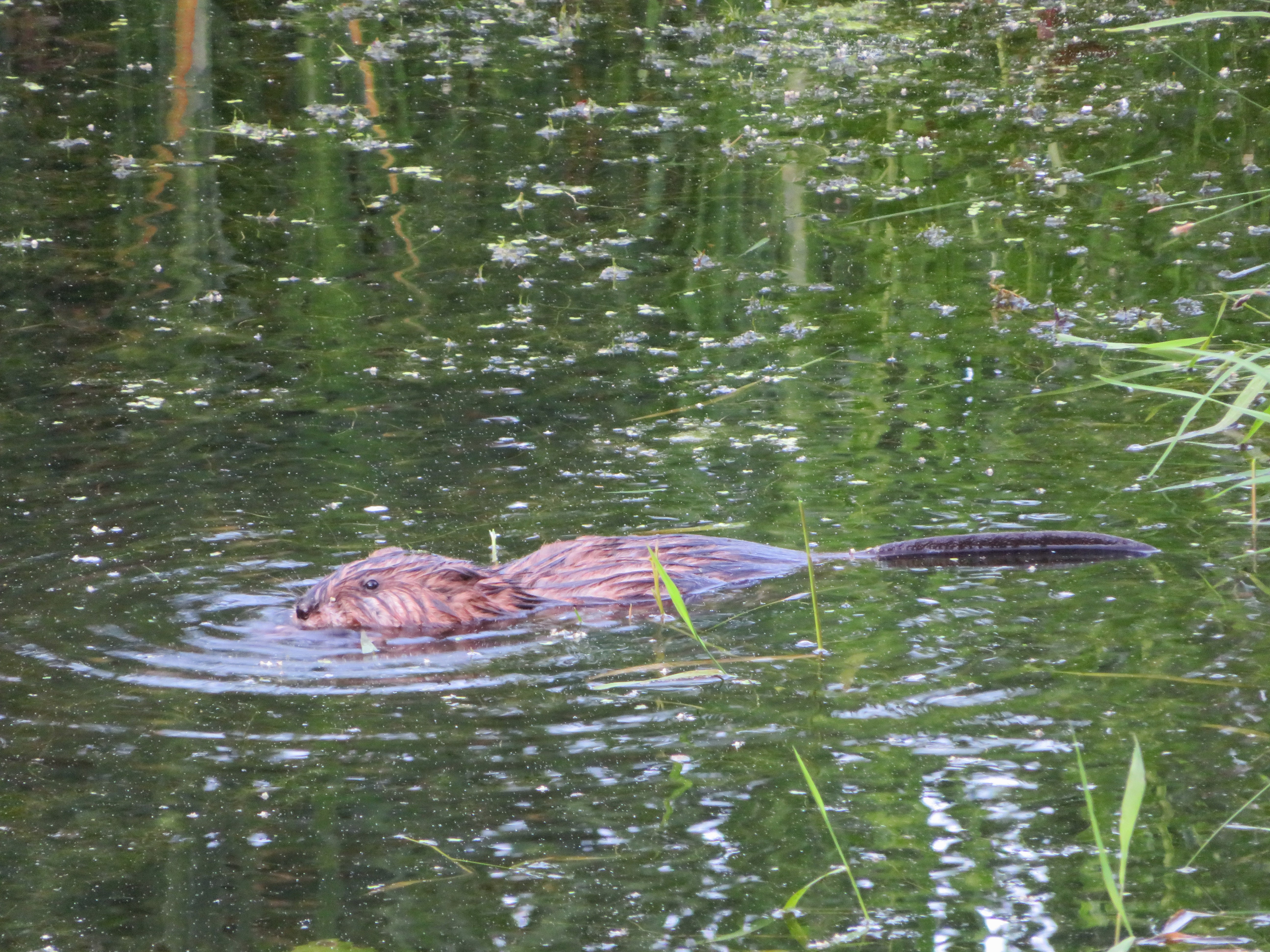 The next day I drove to the detention pond to explore the site with the homeowner. I was not disappointed and found it teaming with life.

Upon arrival we were greeted with a rousing chorus of green frog song, accompanied by the deep resonating melody of a lone bullfrog hidden in cattails at the far end of the pond. Some of the green frogs seemed to be having a low-key territorial war as they jostled in the shallows for the best bug ambush sites. Other frogs were all but hidden, with little more than their eyes and part of their heads protruding above the water. A few were fully exposed, but remained motionless amidst the reeds and swamp milkweeds that lined much of the edge of the pond. Dragonflies patrolled the sky and some zipped dangerously low to the water as they pursued mosquitos and other small insects. I’m sure some of the dragonflies ended up as the main course of frog buffets.

After watching the show for half an hour from the gazebo, we walked down to the edge of the pond where I noticed the dry exoskeleton of a recently emerged dragonfly on the leaf of a jewelweed, a common wetland plant. The exoskeleton served as an excellent reminder of the life cycle of the dragonflies, creatures we usually only see during their winged stage of life. Their aquatic larval stage, known as a nymph, is predatory. During that hidden stage of life they hunt tadpoles and aquatic insects and even very tiny fish. In late spring the nymphs are ready to make the dramatic transformation into adult dragonflies through the process of incomplete metamorphosis. They stop feeding and crawl partially out of the water onto emergent vegetation and begin to breathe air. A dramatic occurrence follows. The nymph climbs all the way out of the water and anchors itself firmly onto a reed or other wetland plant and slowly the “skin” behind the head splits open and the adult dragonfly emerges, and the cycle of life continues. 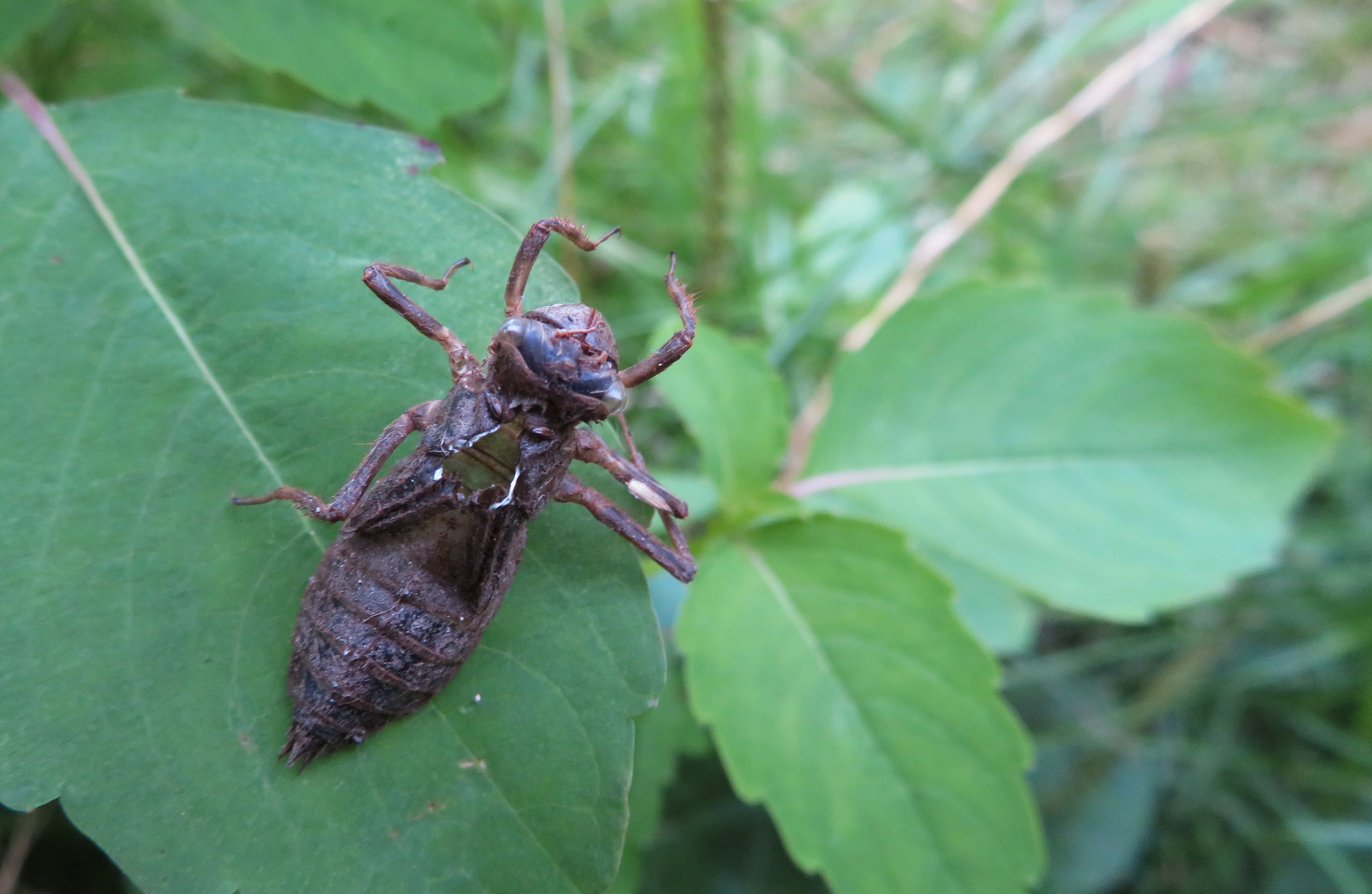 Midland painted turtles were very much at home in the shallow pond in all different sizes and one was on shore laying eggs. They are very easy to identify with their top shells looking almost a bit like a puzzle with a soccer ball pattern. The yellow stripes on the neck are another identification clue. My herpetologist associate Jim Harding at Michigan State University confirmed that one of the ones I photographed had “unusually vivid” neck striping. Painted turtles are omnivorous, feasting on plants and aquatic creatures including crayfish and snails, both of which were visibly present at the pond, as were large tadpoles of bullfrogs. I wondered how the turtles found their way to this pond with the closest large scale natural area being a section of the Bald Mountain State Recreation Area. However, when I returned home and looked at a map I noted small lakes and wetlands about 1/3 of a mile away that would not be a difficult crawl for a turtle before homes were constructed.

Young cottontail rabbits grazed on vegetation in the shadow of the gazebo, seemingly oblivious to our presence. Digging marks in the soft earth indicated skunks were also at home on the pond’s edge. A catbird sung from somewhere near the gazebo and gray treefrogs could be heard trilling in the small adjacent wooded area. With all that activity, almost hidden in plain sight, it was easy at times to forget I was in a subdivision with the sounds of traffic and sirens on M-24 a noticeable reminder.

For better or worse in an era where constant cell phone connectivity is so prevalent, it’s important for both kids and adults to unplug from technology and reconnect with the natural world. The noise of children playing nearby distracted me momentarily from the world of nature unfolding at our feet and I wondered how many of the kids in that suburban neighborhood ever wandered down to the pond to explore. I hope they did. If I had my choice I would install an attractive sign with the words of nature-aware Luther Burbank (a botanist that died in 1926) at the edge of the gazebo facing the sidewalk. “Every child should have mud pies, grasshoppers, water bugs, tadpoles, frogs, mud turtles, elderberries, wild strawberries, acorns, chestnuts, trees to climb. Brooks to wade, water lilies, woodchucks, bats, bees, butterflies, various animals to pet, hayfields, pine-cones, rocks to roll, sand, snakes, huckleberries and hornets; and any child who has been deprived of these has been deprived of the best part of education.” 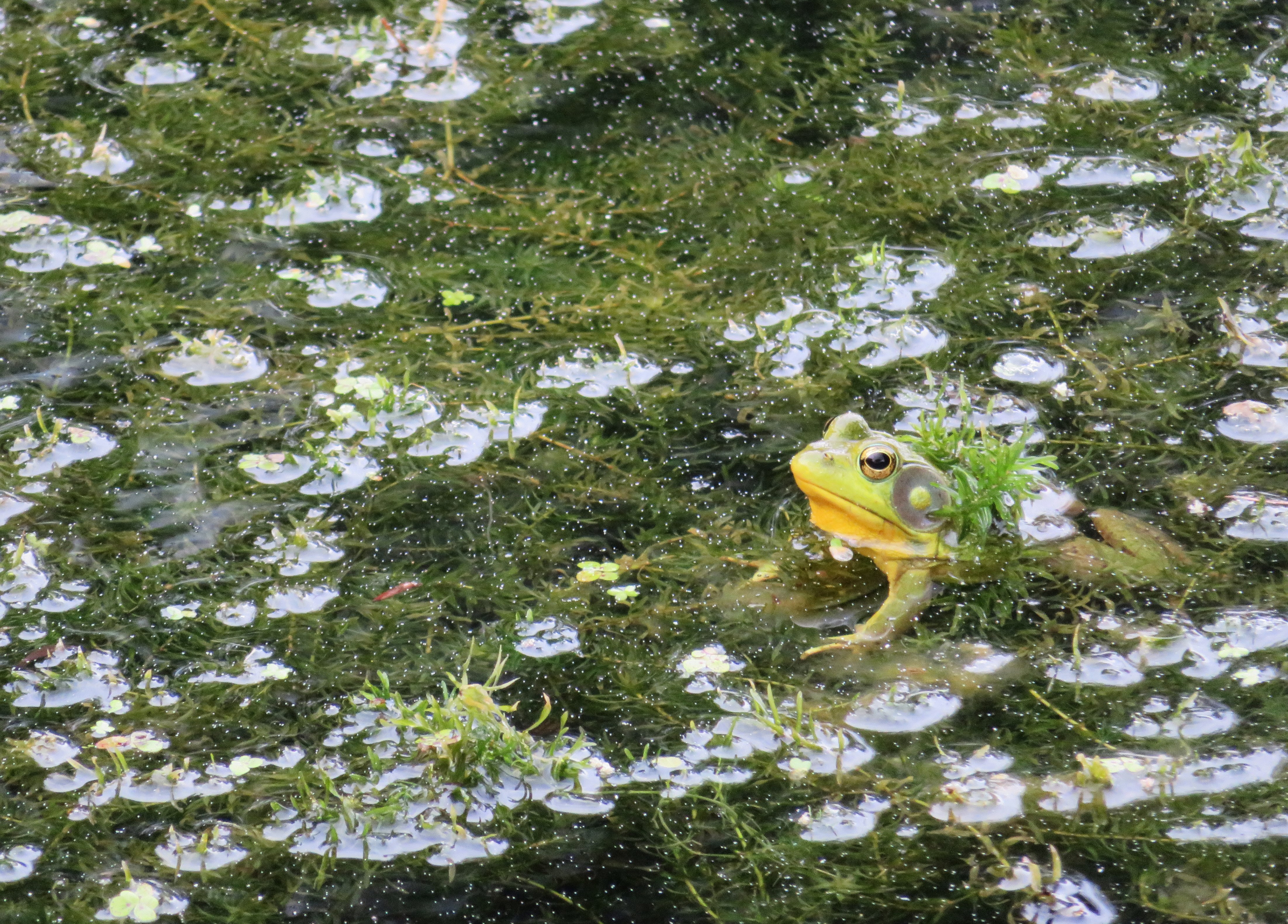 I would add the following words after that quote to encourage children to enter the gazebo and watch the secrets of nature unfold in their tiny pond where nature found her way and continues to thrive: “Nature is where you find it. Come explore your pocket of wildness.”