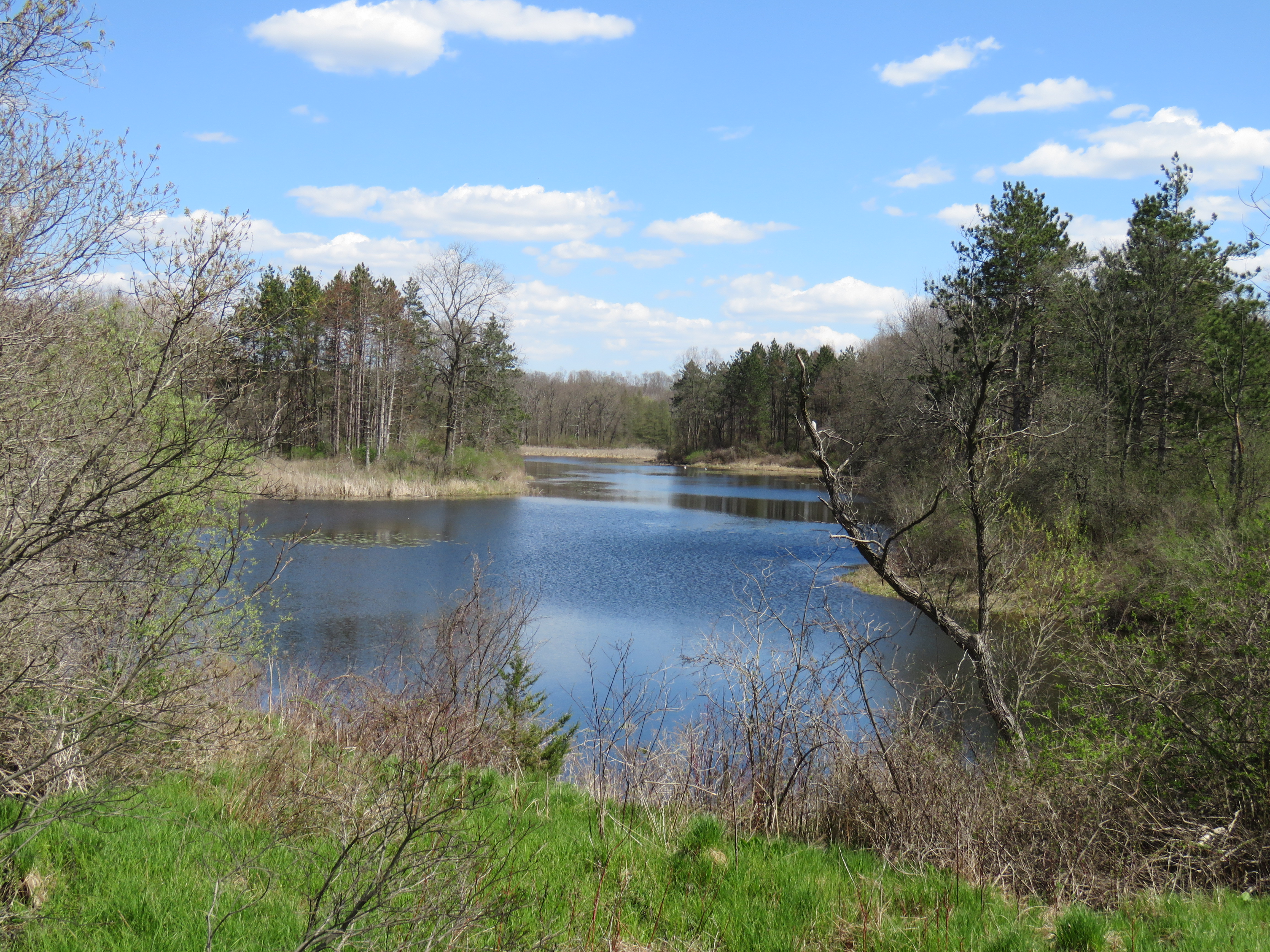 Situational Awareness. That is the one item you must have with you before setting foot in the Davisburg State Wildlife Area. Never heard of this beautiful wildland gem in Springfield Township? Most people have not. If you are looking for a place with a trail system, signage, established parking lots, creature comforts, and other hikers, this is not the place for you. Want to get lost? This might be the place. The landscape has diverse terrain with rolling hills, abundant wetlands, including murky soils that can just about suck boots off your feet, an icy cold stream, a wooded swamp, a hidden lake and excellent habitat for our federally protected swamp rattler, the eastern massasauga rattlesnake. And don’t forget patches of poison sumac at a face-slapping height and skin-scratching thorns. 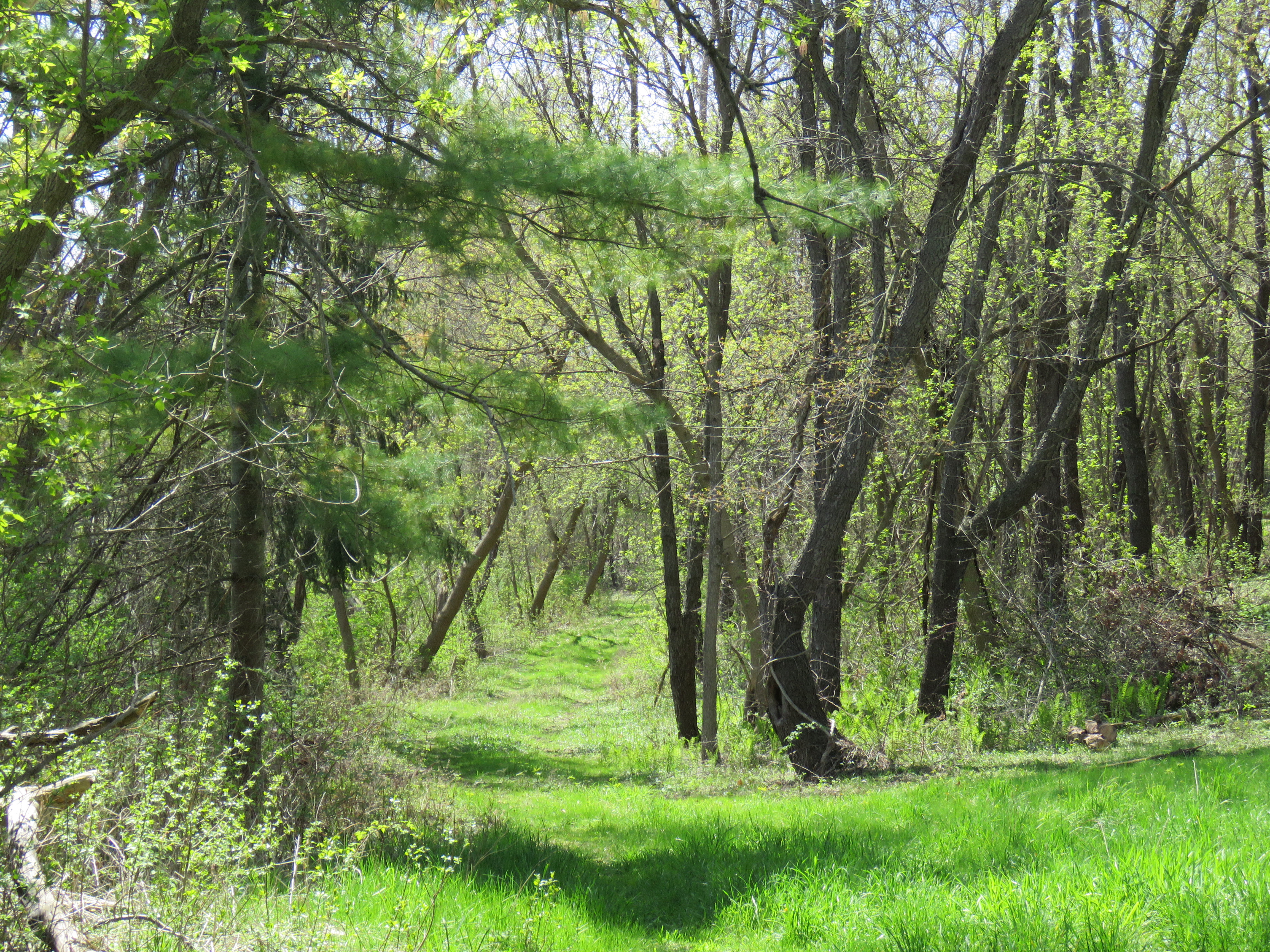 Davisburg State Wildlife Area is a 110-acre publicly accessible site that was purchased by the Michigan Department of Natural Resources in 1948 for the sum of $6,500 as part of a program that was meant to “enhance opportunities” for trout fishing. More relevant history to add to this wilder side tale is that in 1951 the Davisburg Trout Pond Dam was built on an unnamed tributary of the Shiawassee River within the site, creating a lake. The MDNR confirmed in their updated 2012 master plan that at the time of the dam construction, the negative effects of impoundments on headwaters was unknown. By 1970, the idea of that lake being managed for brook and rainbow trout was abandoned, and in 1976, after the DNR Wildlife Division suggested the area be considered as a “mini-game area.” The main public use of this wildlife area, also known as the Davisburg State Game Area, became land open to public hunting. 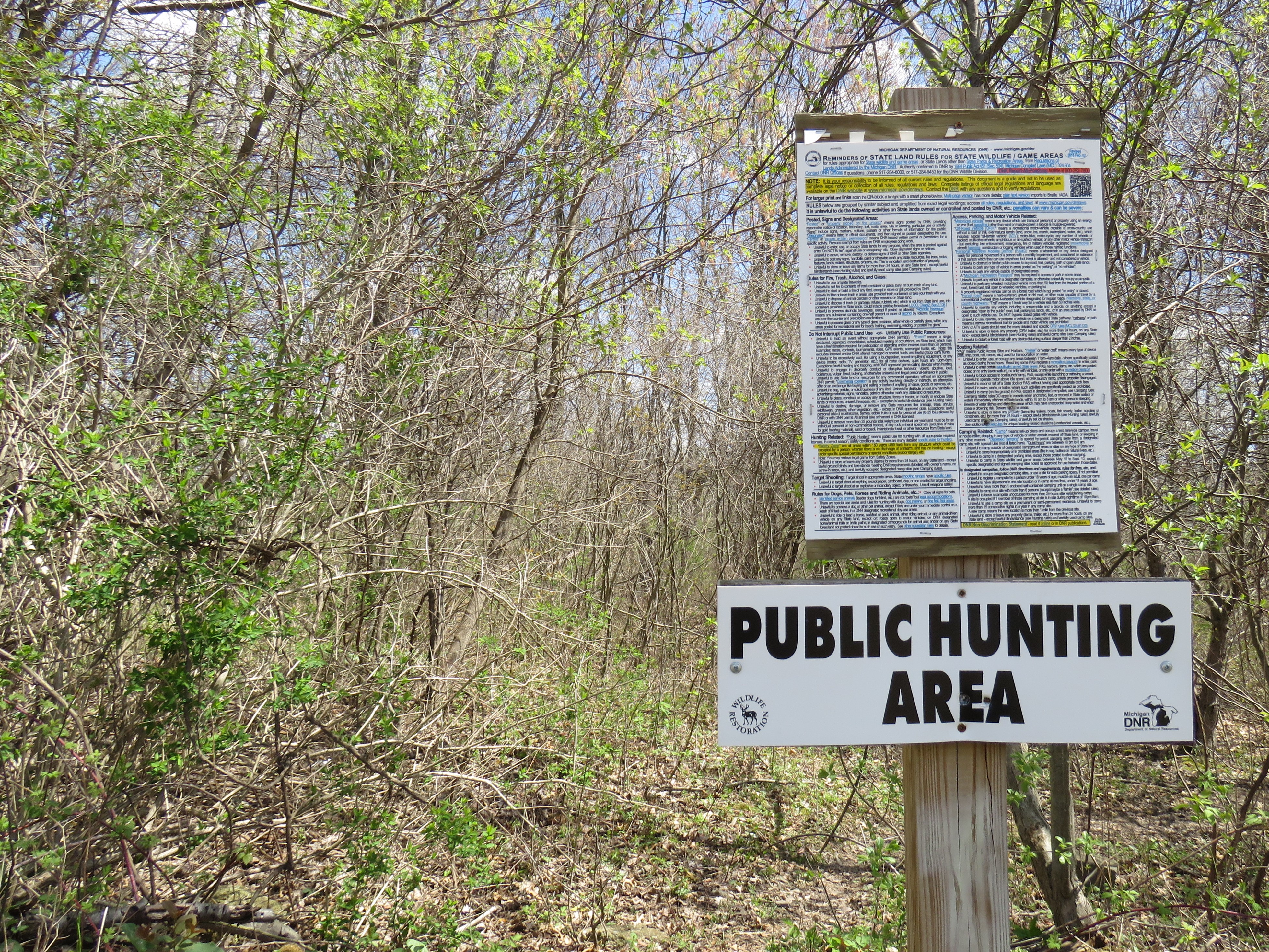 Can bird watchers, flower-lovers, hikers and wildland explorers and tree-huggers go there? Of course they can; but there are things it would be good to know first so the discoveries are not made through trial and error. Before heading out, I printed an online map from the DNR, something I strongly suggest you do as well for the purpose of general orientation, but try as I might, I could not locate the parking area indicated on the south side of Davisburg Road. If it exists, there is no signage for it. I headed south down Dilley Road along the western perimeter of the property for about two tenths of a mile and noted a small muddy parking area pull out next to a sign, indicating access and public hunting. That’s where I started my adventure. If you cross the railway tracks, you missed it.

Don’t look for trails on the map or trail signage in the wildlife area. There are none. My trek was mostly along an old pathway created by hunters and deer, and for a short time, a well-trodden path just a few dozen feet from the railbed that defines the southern perimeter. Shotgun shells and other litter was rather prevalent in the south end of the wildlife area, the section that abuts the rail bed. l also stumbled upon a large homemade deer hunting stand attached to a tree. But there was also exquisite beauty just a few hundred feet into the woodland from an eruption of late spring blooming ephemerals, including the delicate rue anemone and various shades of hepatic blossoms. My knee almost came down on sunning garter snake as I knelt to photograph those flowers on a wooded slope. I offered apologies for my intrusion and we both continued our separate ways, he slithered uphill and I headed downhill towards a marsh.

Dappled sunlight illuminated the brilliant yellow blossoms of marsh marigold, a member of the buttercup family that favors swamps, marshes, fens and wet woods, all of which are present on site. Poking up from the ground were great green carpets of skunk cabbage leaves. The bright red bark of red-osier dogwood shrubs appeared along another bluff and provided a perfect vantage point to watch a red-tailed hawk circling high above and occasionally swooping low before passing out of sight behind the blossoms of a Juneberry tree in full blossom. Almost every step of my adventure brought another appointment with the ways of nature and that made the solo exploration just perfect.

I wandered the southernmost section, keeping the train tracks and location of the sun in mind to watch my bearings. I caught a glimpse of a Pileated Woodpecker in flight after it took off from a tree that supported fungi and showed the carpentry of our red-crested forest giant. A small ridge above one of the wetlands provided a perfect view of a unique feature of our only deciduous conifer, the Eastern Tamarack. In autumn, the needles turn golden in a spectacular show, but spring brings a more subtle beauty, as very soft and tiny pinkish female cones emerge from within clusters of new needles.

After an hour of exploration, I set out to find a way to reach Trout Lake without doing the foolhardy option of just hiking northeast through large marshes with hopes of finding it. Bushwhacking through wetlands is the mission of a fool, unlike adventuresome bushwhacking on terra firma.

When I first drove to the Davisburg State Wildlife Area in search of an entrance, I had noticed a vehicle pulled to the east side of the road just a few hundred feet from Davisburg Road, immediately across from the northeast corner of adjacent Shultz Park (Shultz Park is an 18.5-acre site located on the corner of Dilley and Davisburg Roads, managed by Springfield Township that includes a swing set, ball diamonds, restrooms and an outdoor pavilion with picnic tables and grills). I went back to that location and spotted another public hunting sign on the east side of Dilley Road. I parked near the sign and began to follow a grassy two-track path into the woods.

That spacious path took me just beneath the property line of homes along Davisburg Road. A fence clearly indicated where State Land ended and private property began, reassuring me I was on the right path. Another five minutes of slow paced walking brought me to a small overlook at the site of the dam, and what a spectacular view I had of this all but hidden lake created by the dam. A Red-winged Blackbird perched on a dead limb proclaimed loudly that this was his land. A pair of Wood Ducks took flight from a bend in the creek below the dam as I walked cautiously over the dam, but I opted not to proceed further into unknown territory for that silent voice of situational awareness reminding me to “be aware and wary.”

As I walked back to my car, I noted a small flash of blue as a tiny butterfly flitted along near a fen. I was only able to capture one photo of the fingernail size beauty when it landed momentarily and that was of its folded underwings. At first I believed it was the federally endangered and very rare Karner Blue Butterfly, but a belief or wish does not make something a fact. The jury is still out on a positive identification but it may be the far more common and very similar appearing Spring Azure. 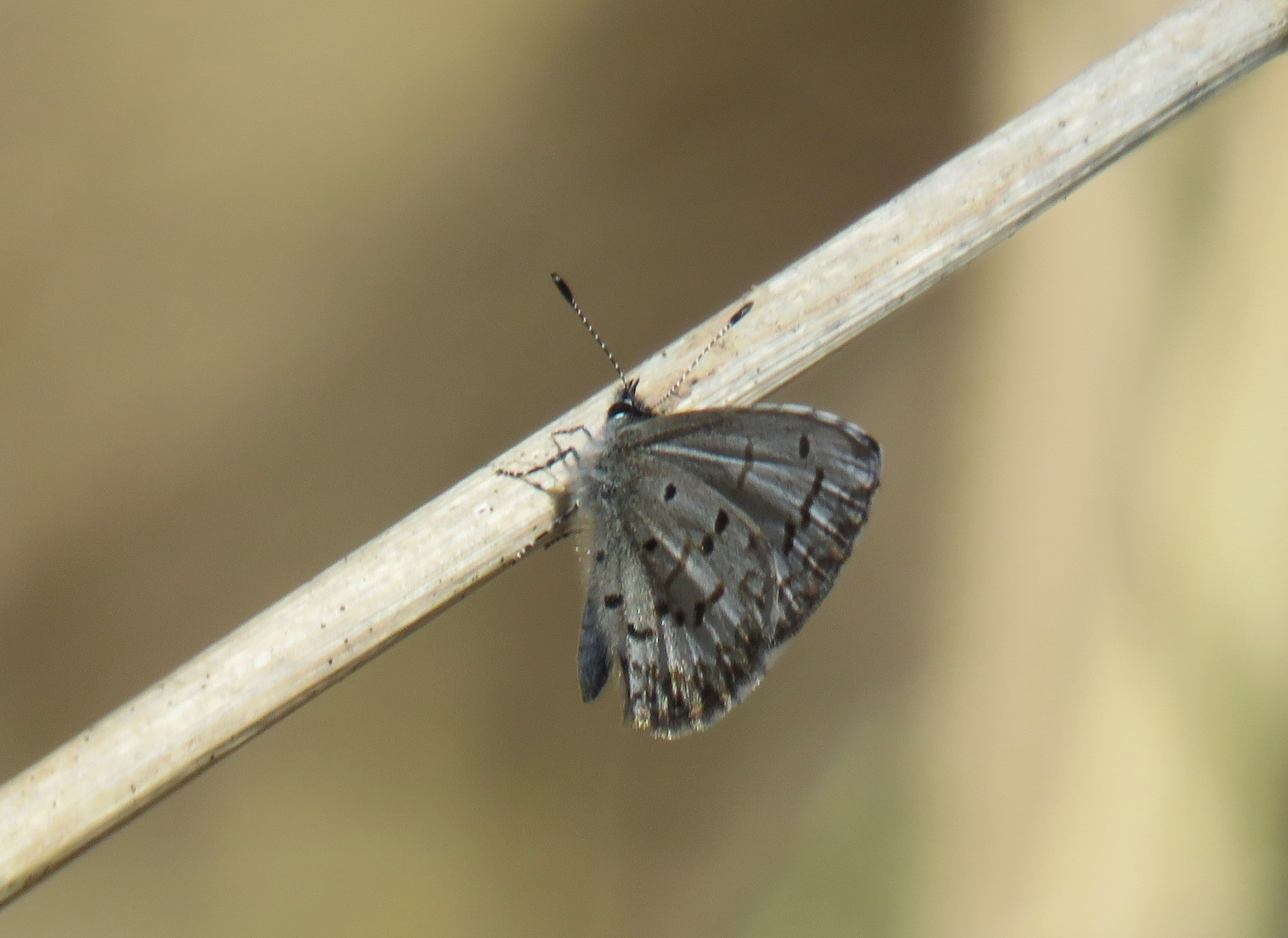 Additional research gleaned from the DNR’s Davisburg State Wildlife Area Master Plan confirmed my belief that the area is prime rattlesnake habitat. Some interesting comments on the connectivity of nature are abbreviated here for clarity and space: Fens occur where cold calcareous ground water fed springs, “spring” out of ground and reach the surface often leaving marl deposits on the surface. Many plant species have survived in this area for thousands of years, and because fens never freeze, they provide crucial overwintering habitat for reptile and amphibians, especially the eastern massasauga rattlesnake. The dam disrupted the natural hydrology and destroyed much of the rare plant community that was here. Although Trout Lake is beautiful, the DNR will in all likelihood remove the dam one day, a fact indicated in their master plan to improve the natural quality of the landscape and prairie fen community.

I also discovered from the report that this area might be better suited to be managed by local government and both Springfield Township and/or Oakland County Parks might one day be involved in a future partnership of this lesser known State Wildlife Area.

I plan on a return trip later this year, perhaps on a sultry summer day with a thought in mind, “Woodlands, wetlands and wildlands cradle our well-being.” That means that the $6,500 dollars spent back in 1948 to purchase the land was money well spent. It’s an investment for our future, and for all who value or follow the trails of the wilder side of Oakland County – even where there are not any.

One thought on “Exploration of the Davisburg State Wildlife Area”